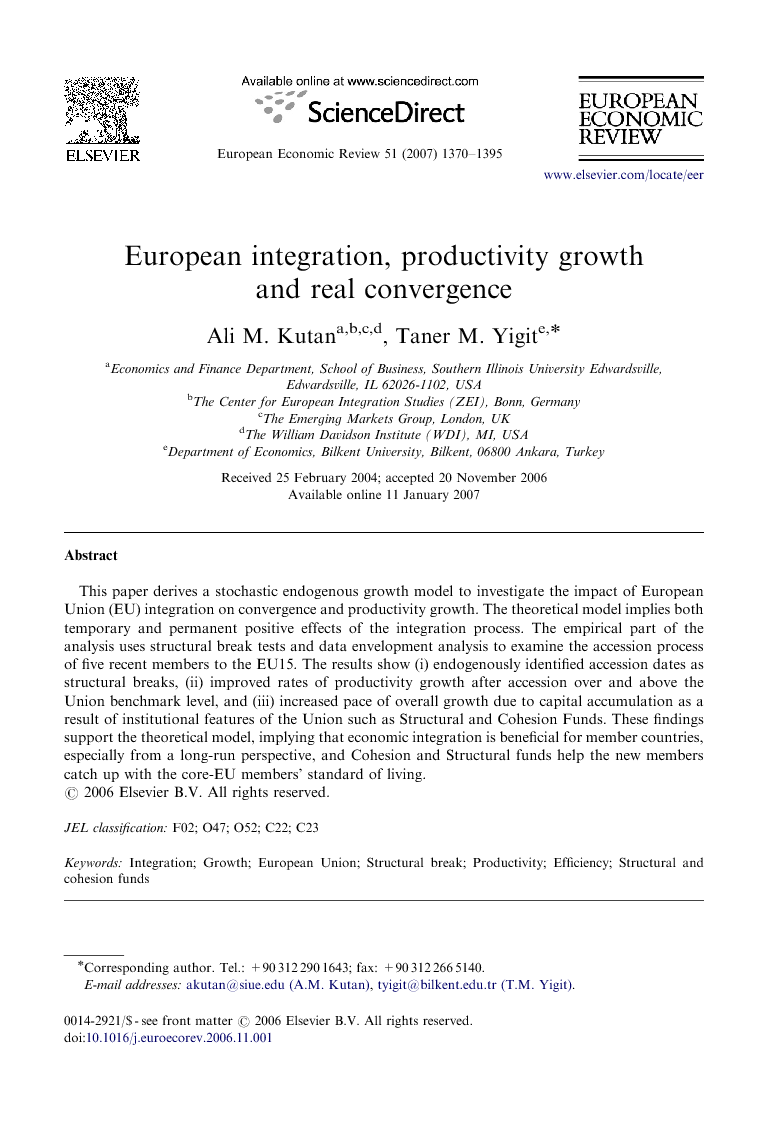 This paper derives a stochastic endogenous growth model to investigate the impact of European Union (EU) integration on convergence and productivity growth. The theoretical model implies both temporary and permanent positive effects of the integration process. The empirical part of the analysis uses structural break tests and data envelopment analysis to examine the accession process of five recent members to the EU15. The results show (i) endogenously identified accession dates as structural breaks, (ii) improved rates of productivity growth after accession over and above the Union benchmark level, and (iii) increased pace of overall growth due to capital accumulation as a result of institutional features of the Union such as Structural and Cohesion Funds. These findings support the theoretical model, implying that economic integration is beneficial for member countries, especially from a long-run perspective, and Cohesion and Structural funds help the new members catch up with the core-EU members’ standard of living.

In an age where many countries strive to join the European Union (EU) although countries like Switzerland and Norway constantly refuse to join, it is natural to ask whether EU membership has any long and/or short run benefits. Although the effects of joining an economic union have been studied extensively because of their implications for policymakers, it is quite difficult to measure the overall benefits of integration because it impacts many aspects of an economy. Even studies focusing on a specific effect of integration on growth have provided incomplete conclusions because they had to use proxies to represent the integration process.1 These proxies, such as trade, foreign direct investment (FDI), research and development (R&D) expenditures, number of patents issued, and time series dummies are limited in scope, and hence they can only partially capture the overall impact of joining a union. Besides being unobservable, such proxies can lead to false inferences, because of endogeneity and causality issues.2 While the biggest benefit one expects from entering into a union like the EU is the rise in living standards through a high level of cooperation in all economic, political and institutional aspects, it is very difficult to envisage a proxy for such a complex network of cooperation and sharing of knowledge. In this paper, we investigate the benefits of integration on economic growth, productivity and convergence, specifically focusing on knowledge spillovers. We employ alternative ways to detect and decompose these unobservable benefits without restricting ourselves to one specific proxy. To accomplish our objective of observing the outcome of broad and multifaceted institutional and technological cooperation, we propose to focus on how the growth process changes following the EU membership. Detecting such changes may not be sufficient, however, because they could be to the result of other factors. Hence, in order to connect the sharing of knowledge to growth, one needs to measure changes in productive as well as technological capabilities. In this paper, we aim to obtain evidence of such abstract benefits by decomposing significant developments in growth into observable changes in economic variables (inputs) and the not-so-observable changes in productivity and efficiency. We also control for the institutional facet of integration, namely the net budget transfers such as the Structural and Cohesion Funds, so that the effects of knowledge spillovers and integration on growth could be separated from the effects of such capital flows. More specifically, our research extends the stochastic endogenous growth literature to capture the impact of economic integration on convergence and productivity growth. Applying Rivera-Batiz and Romer's (1991, RB-R hereafter) analytical hypothesis that integration leads to sharing of knowledge and technology, we develop a new theoretical framework to capture the effects of integration on growth. Using RB-R's hypothesis, we are able to extend the work of Lee, Pesaran, and Smith (1997, LPS hereafter) to examine changes in productivity and convergence rate after the accession to a union. We subsequently test the theoretical claims of our model using a battery of structural break tests and data envelopment analyses to find confirmation for strong positive response to integration on a number of dimensions. In a nutshell, our findings show that integration into an economic union has direct (capital accumulation) and indirect (technology transfer) effects on a country's growth process. The institutional aspects of the EU integration, such as the Structural and Cohesion Funds programme, also seem to play an effective role in furthering economic convergence and growth. The paper is organized as follows. In Section 2, we briefly review the earlier work and discuss our contribution in light of these studies. Section 3 sets out our theoretical model. We describe our estimation technique in Section 4 while data description and empirical results are given in Section 5. The last section provides a summary of the key findings of the paper and its policy implications.

In this study, we use a new methodology to estimate the impact of European integration on convergence and productivity growth, one that does not require the use of proxy variables. Our theoretical formulation captures the unobservable process of knowledge sharing resulting from integration and its effect on growth, productivity, and convergence rate after accession. Using a series of structural break tests and data envelopment analysis, we test the theoretical predictions of the model for the five recent members to the EU15. The results show improved rates of productivity growth after accession over and above the EU benchmark level. In addition, we observe an increased pace of overall growth due to capital accumulation as a result of Structural and Cohesion Funds. Our key implication for policy is that our results show that integration enhances productivity and growth. The institutional aspects of EU integration, such as Structural and Cohesion Funds, play an effective role in furthering economic growth. Providing such funds for new member states, despite temporary distortions in the pricing of productive factors in the short run, helps the recipient economies in the long run by allowing them to catch up faster with the core EU15 members.