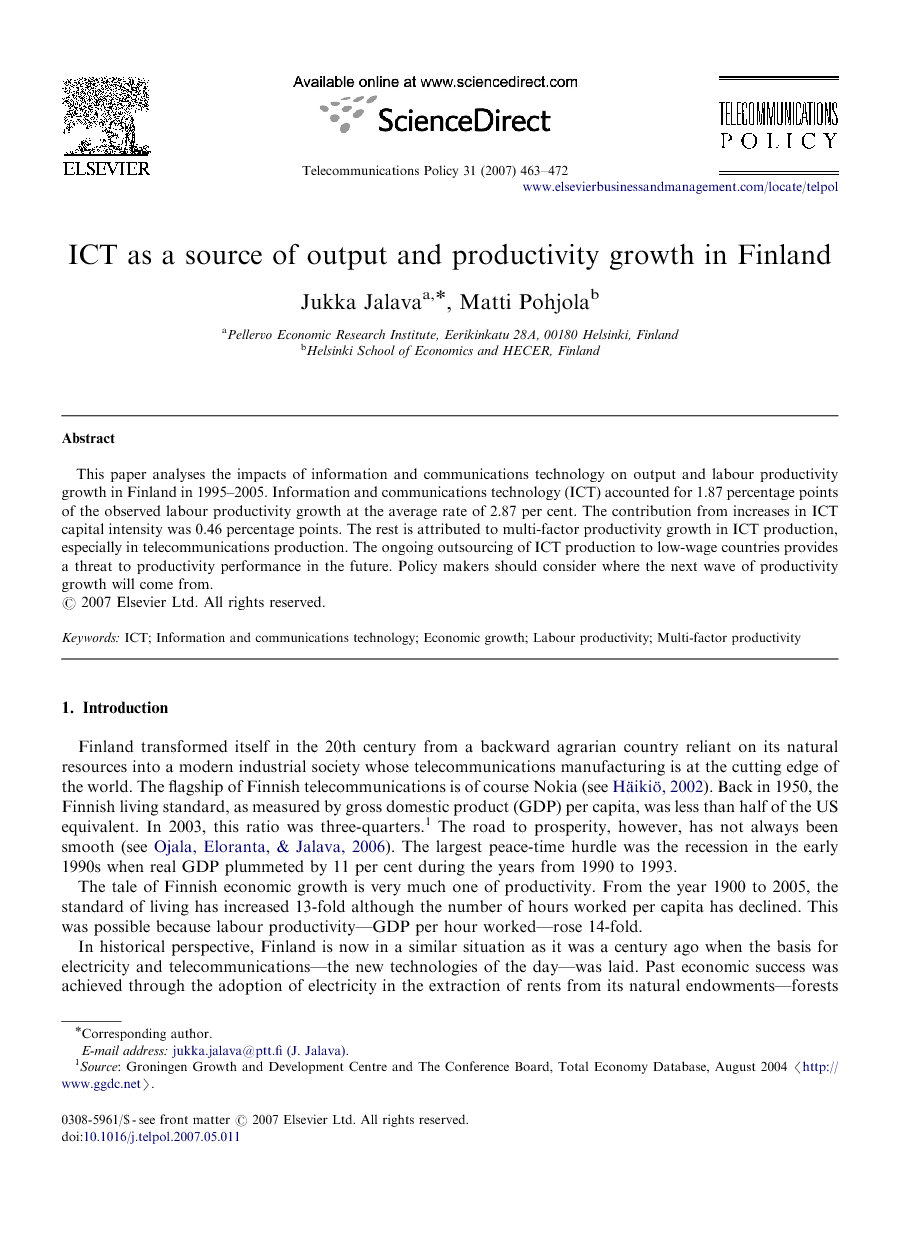 Finland transformed itself in the 20th century from a backward agrarian country reliant on its natural resources into a modern industrial society whose telecommunications manufacturing is at the cutting edge of the world. The flagship of Finnish telecommunications is of course Nokia (see Häikiö, 2002). Back in 1950, the Finnish living standard, as measured by gross domestic product (GDP) per capita, was less than half of the US equivalent. In 2003, this ratio was three-quarters.1 The road to prosperity, however, has not always been smooth (see Ojala, Eloranta, & Jalava, 2006). The largest peace-time hurdle was the recession in the early 1990s when real GDP plummeted by 11 per cent during the years from 1990 to 1993. The tale of Finnish economic growth is very much one of productivity. From the year 1900 to 2005, the standard of living has increased 13-fold although the number of hours worked per capita has declined. This was possible because labour productivity—GDP per hour worked—rose 14-fold. In historical perspective, Finland is now in a similar situation as it was a century ago when the basis for electricity and telecommunications—the new technologies of the day—was laid. Past economic success was achieved through the adoption of electricity in the extraction of rents from its natural endowments—forests and minerals. The process created the present industrial structure in which the forest and metal sectors dominate. At best, GDP per hour worked increased at the average rate of 5 per cent per year. Starting in the early 1970s, however, there has been a worrisome shift into slower gear, as the gains from industrialization have been depleting. After the turn of the millennium, labour productivity change averaged only half of its earlier peak figures (Fig. 1).2The slowing down of productivity growth would not be a policy problem if it could not be remedied. But as the recent success of the US economy shows, decelerating productivity growth can be turned into accelerating growth. The observed step-up in the trend of US labour productivity in the post-1995 era was traced by Jorgenson, Ho, & Stiroh (2003) and Jorgenson, Ho, & Stiroh (2006) to the impact of information and communications technology (ICT) on GDP growth. This growth resurgence prompts the question: How can the same outcome be accomplished elsewhere? This is especially topical in a country like Finland which has reaped the benefits of the Nokia-phenomenon—the case in point of a successful production of a new technology—but there is still room for improvement in the use of the new technology in the production processes of other industries. Like electricity, ICT is a general-purpose technology (Bresnahan & Trajtenberg, 1995) that spreads to all sectors of the economy, improving and becoming cheaper over time and facilitating the creation of new goods, services and modes of operation. It affects economic growth both as a component of aggregate output in the form of ICT production and as a component of aggregate input in the form of ICT capital services. Furthermore, it has an impact on growth via the effect of multi-factor productivity (MFP) gains induced by rapid technological advances in the ICT-producing industries. To provide a background for policy conclusions, a brief history of ICT in Finland is presented in Section 2. Neoclassical growth accounting is then applied to delineate ICT's influence on output and labour productivity growth. Due to the extraordinary severity of the recession in the early 1990s, the focus is on the 1995–2005 period. In Section 3, the growth accounting methodology is outlined. Section 4 describes the data, and Section 5 presents the results. The last section presents a projection of labour productivity growth in the future and draws conclusions for policy.

In this paper, stock was taken of the impacts of information and communications technology on output and labour productivity growth in Finland between 1995 and 2005. The results showed that one-fifth of the quality adjusted GDP growth at the rate of 4.06 per cent stemmed from ICT production. This is remarkable as the share of ICT production of GDP was only 5 per cent. Nearly one-fifth of the growth was traced to the manufacture of electronics: Finland's Nokia-phenomenon. On the input side, the authors’ growth accounting results showed that ICT capital services contributed 0.50 percentage points to economic growth. The contribution of total capital services was 1.07 percentage points, so information and communications technology alone stood for almost one-half of the contribution. The inputs combined contributed 1.99 percentage points of growth and 0.39 percentage points of this was traced to quality improvements. Labour productivity increased on average by 2.87 per cent a year. The contribution of ICT capital deepening was 0.46. Summing this up with the ICT-related multi-factor productivity growth, ICT accounted altogether for 1.87 percentage points of the improvement in GDP per hour worked. This amounted to 65 per cent of the observed labour productivity growth. But what are the future prospects of the Finnish economy? A simple projection can be made on the basis of the growth accounting analysis of labour productivity. Assuming that the economy will be in a steady-state where output and capital services grow at the same rate, Eq. (4) turns into Jalava and Pohjola (2004) estimated that the growth of labour quality Δln L−Δln H is likely to turn negative and may lie in the range between −0.10 and −0.15 per cent in the coming years. This follows from the adverse effects of an aging population on labour productivity. Assuming that labour's income share and MFP growth will be the same in the future as in 1995–2005; Eq. (8) predicts that labour productivity will grow at a rate of approximately 3 per cent. This projection may be on the optimistic side, although the historical evidence in Fig. 1 shows that it is not completely unrealistic, because MFP growth might have been exceptionally high in the 1995–2005 period as the economy was recovering from the deep recession of the early 1990s and reaping the fruits of the Nokia phenomenon. But even if MFP growth were to decline to more modest numbers, the growth prospects of the Finnish economy are not as gloomy as often claimed in public debate. However, given the large dependency on the ICT-producing sector, the ongoing outsourcing of ICT production to low-wage countries provides a threat to productivity performance in the future. Finland may have to restructure its economy once again in the digital era. How should the policy makers react to this threat? It was shown in Section 2 that Finland was one of the leading countries in adopting the telephone. For political reasons, a competitive telecommunications market was created whereas in most other countries the telephone was a state monopoly. It took however a long time, about 100 years, until Finland's competitive advantage in the production of telecommunications equipment and services was revealed. Admittedly, the paper has not been able to prove in this paper that a causal link exists between the decisions made by policy makers more than 100 years ago and the success of the present-day Finnish economy. But it is hard to think how such success would have been possible without being close to the frontier in the use of this technology. The lesson learnt is that the output and productivity impacts of the new technologies can be long-delayed. Consequently, current policy makers should consider whence will come the next wave of productivity growth. As shown, ICT has already contributed to economic growth by improving productivity in the industries producing ICT equipment. It has also enhanced labour productivity in the rest of the economy through capital deepening, i.e., through the substitution of ICT capital for other forms of capital. However, the effects on MFP from the re-organization of production and work are yet to come (see, e.g., Pohjola, 2006). ICT is expected to increase productivity by standardizing, automating and outsourcing white-collar work in basically the same way as the assembly line mechanized manufacturing. The on-going digitalization and outsourcing of business processes will result in the restructuring of white-collar work at the global level and, consequently, may bring about a new wave of productivity growth. Various business information systems, such as Enterprise Resource Planning software, play here much the same role as the assembly line did in the transformation of industrial work. Digitally stored information (R&D, financing, insurance services, accounting, payroll, etc.) can already be generated away from the office. Intelligent use of information is a source of increased productivity, just as natural resources were in the 20th century. The difference is that natural resources are tied to a certain place, whereas information has no such restrictions. It can be produced just as well in India, China, Russia or Estonia as in Finland. Geography is no longer of essence, as everyone has equal access to global information networks. The new restructuring of the economy may be as great as the one witnessed over 100 years ago when electricity and the telephone were invented.