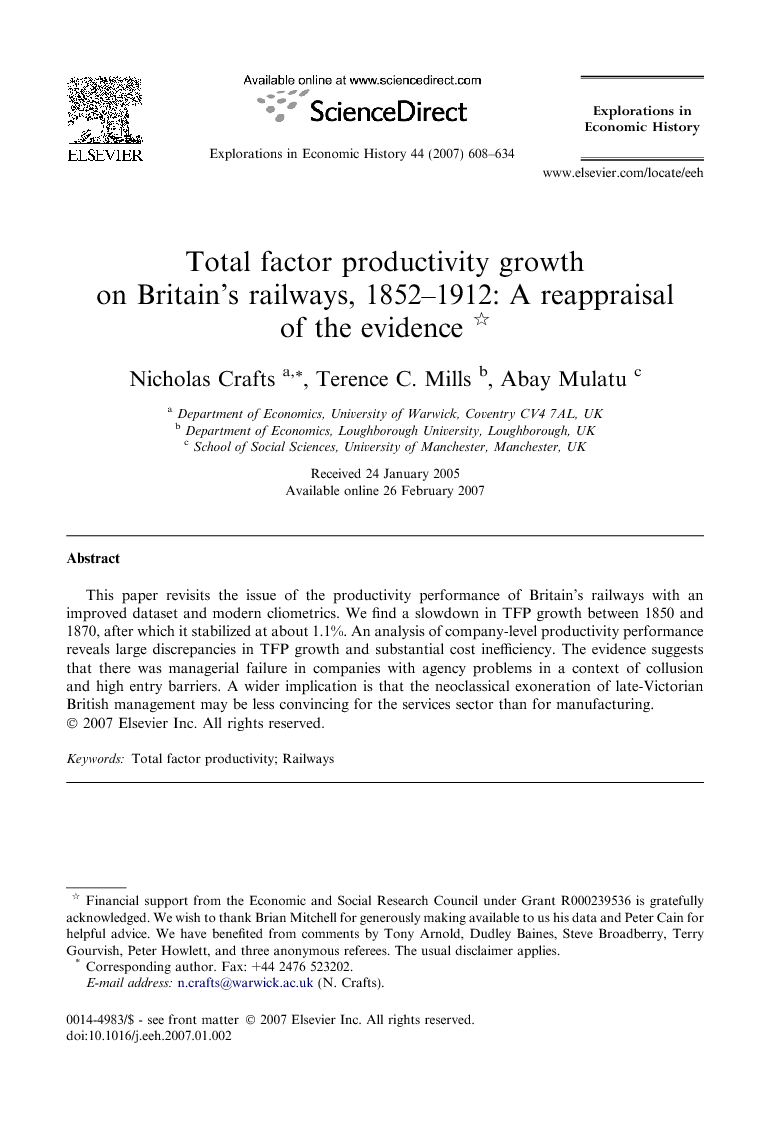 This paper revisits the issue of the productivity performance of Britain’s railways with an improved dataset and modern cliometrics. We find a slowdown in TFP growth between 1850 and 1870, after which it stabilized at about 1.1%. An analysis of company-level productivity performance reveals large discrepancies in TFP growth and substantial cost inefficiency. The evidence suggests that there was managerial failure in companies with agency problems in a context of collusion and high entry barriers. A wider implication is that the neoclassical exoneration of late-Victorian British management may be less convincing for the services sector than for manufacturing.

Before the new economic history came along, it was commonplace to allege that late nineteenth century Britain experienced ‘entrepreneurial failure’ and a climacteric in productivity growth (Landes, 1969 and Saul, 1968). Now these claims are much more muted or nuanced as it has been recognised that the quantitative evidence offers relatively little support for them (Crafts, 2004a). Indeed, as the excellent summary in Nicholas (2004) makes clear, the neoclassical view, backed up by substantial cliometric research, is that the economy was growing as fast as exogenous constraints allowed with no serious evidence of failure to maximize profits and competition eliminating entrepreneurial failures. Moreover, the suggestion originally made by Phelps-Brown and Handfield-Jones (1952) that there was a climacteric in industrial productivity growth resulting from the exhaustion of steam as a General Purpose Technology has been rejected (Crafts and Mills, 2004). However, railways have not received the exoneration that has been given to most other sectors of the economy and the quality of their management and their productivity performance are still seen as, at best, deficient and, at worst, dismal. The best-known textbook account concludes that “there was waste and inefficiency in the railway system of Great Britain between 1870 and 1914” (Cain, 1988, p. 120). The most recent assessment of railway management based on financial performance is that of Arnold and McCartney (2005). They conclude that returns to investors were consistently disappointing and that any increase in the net return on capital after 1900 was slight as mean returns on capital employed for the industry as a whole were below 4% throughout the period 1892–1912. Arnold and McCartney argue that management incurred unnecessary costs and paid relatively little attention to creating shareholder value. The most recent review of productivity performance stresses that British railways were greatly inferior to their American counterparts and attributes this largely to managerial failure facilitated by weak shareholders and barriers to entry: “total factor productivity growth…declined continuously after 1870 becoming negative in the Edwardian period”, and “organization and customs that had been appropriate to one epoch of railway technology persisted when opportunities and challenges changed. Inertia was encouraged by an absence of competition…” (Foreman-Peck and Millward, 1994, pp. 88, 90). It is important to recognize that the exoneration of the late Victorian and Edwardian British economy from the allegation of entrepreneurial failure announced by new economic historians is problematic in the case of railways. The general argument stressed by McCloskey and Sandberg (1971) was that competition punished firms that failed to perform well. It is striking that the one well-established case of entrepreneurial failure in the manufacturing sector, the non-adoption of the Solvay process in alkali production, occurred in a cartelized industry largely sheltered from foreign competition (Magee, 2004). Railways differed from the typical sector represented in the neoclassical exoneration. In particular, agency problems arising from the separation of ownership and control were relatively severe and competition, a potential antidote to such problems, was relatively weak compared with manufacturing. In these aspects, railways are precursors of a more general problem that was central to British relative economic decline after World War II (Broadberry and Crafts, 2003). In recent discussions of British relative economic decline, the pivotal role of the service sector, in which the initial British productivity lead was later reversed by Germany and the United States, has been highlighted. Broadberry (2006) stresses that Britain did particularly badly in services which became ‘industrialized’, i.e., they switched to high-volume, low-margin business with hierarchical management, thereby obtaining substantial productivity gains. Railways were the first sector to make this transition. Table 1 reports new estimates of relative labor productivity on American and British railways.1 These show that there was already a substantial productivity gap in 1870 which then widened markedly over time. It is apparent that this derives from freight rather than passenger business and there is no doubt that the much larger ton-miles per worker in the US reflects much longer average hauls and constraints imposed by the original design of the British railway system. Even so, such a massive gap is a worrying diagnostic of British productivity performance.It is timely, therefore, to re-examine productivity performance in Britain’s railways during the Victorian and Edwardian periods. In this paper, we first construct a new aggregate TFP index for Britain’s railways, drawing heavily on unpublished estimates of the net capital stock and expenditures on wages in 30 major railway companies made by Brian Mitchell and based on revised estimates for the transport of freight. We use this index to conduct an econometric analysis of trends in each of capital, labor and total factor productivity. We also examine TFP growth in individual railway companies for the period 1893–1912 and attempt to measure this on a basis as consistent as possible with our national estimates. We then investigate explicitly how close to an efficient cost frontier individual companies were through these years and whether inefficiency and lagging TFP growth were persistent. By reviewing this micro evidence insights can be obtained relating to the extent of failure in the performance of the sector as a whole. In particular, we address the following specific questions: (1) What was the chronology of TFP growth on Britain’s railways before World War I? (2) How much did productivity growth and efficiency levels vary across major railway companies in the late Victorian and Edwardian periods? (3) Were costs too high in Britain’s railways at this time? (4) Are railways an important exception to the neoclassical exoneration of British management and growth performance? As a by-product of this investigation it will also be possible to clarify the part railways played in the alleged climacteric, i.e., to quantify their impact on the growth of GDP per worker.

We posed four explicit questions at the outset. Our answers are as follows. First, on the basis of our new TFP index for British railways and a time-series analysis of its properties, we conclude that labor productivity was stationary over the long run while trend TFP growth fell steadily from a little under 2.5% per year in the 1850s to about 1.1% per year in the early 1880s, at which rate it continued without any further decline till World War I. Second, TFP growth varied considerably across major railway companies in the period 1893–1912, with a gap of 0.8 percentage points between the best and worst performers. There is no evidence of catch-up by the laggards. Third, actual costs were well above minimum feasible costs on Britain’s railways. In the years 1893–1912 cost inefficiency averaged about 13% and the situation was not improving as the period drew to a close. Fourth, railways appear to have missed opportunities to raise TFP growth and can be accused of managerial failure. The railway sector appears to be a non-trivial exception to the neoclassical exoneration of late-Victorian Britain, given that it accounted for 20.4% and 14.6% of the economy’s capital stock in 1870 and in 1913, respectively (Feinstein, 1988). The substantial labor productivity gap between British and American railways could have been reduced by better management. Managerial failure on Britain’s railways has wider significance. It underlines the importance of competition in sustaining performance in sectors where entrepreneurial failure was not a problem. It also points to the need for a greater emphasis on research into service sector productivity both because of the key role that this played in British relative economic decline (Broadberry, 2006) and because it has received relatively little attention from cliometricians investigating allegations of British entrepreneurial failure.