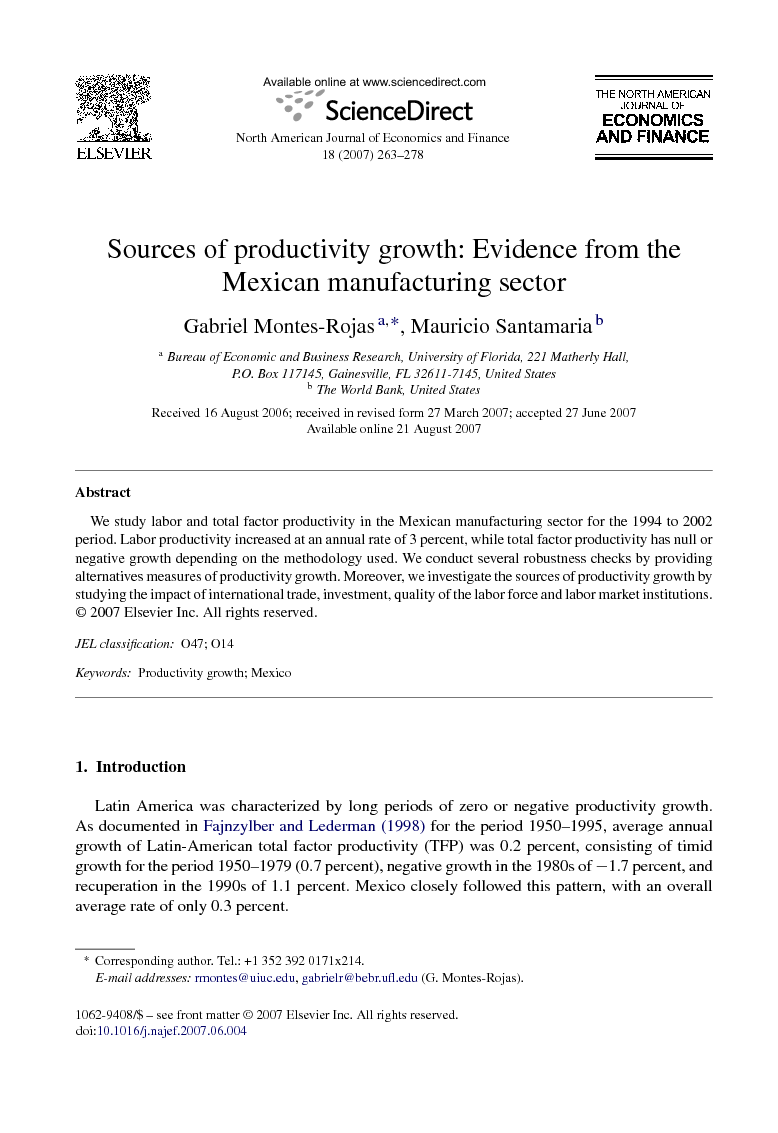 Latin America was characterized by long periods of zero or negative productivity growth. As documented in Fajnzylber and Lederman (1998) for the period 1950–1995, average annual growth of Latin-American total factor productivity (TFP) was 0.2 percent, consisting of timid growth for the period 1950–1979 (0.7 percent), negative growth in the 1980s of −1.7 percent, and recuperation in the 1990s of 1.1 percent. Mexico closely followed this pattern, with an overall average rate of only 0.3 percent. Table 1 presents a selection of estimates of productivity growth for Mexico. Although there is considerable variation, all the estimates agree on the sign: negative TFP growth in the 1980s, timid positive growth in the 1990s. However, the variability in the magnitudes suggests that the results are strongly dependent on the methodology used. The first goal of this paper is to contribute to this literature by estimating productivity growth in Mexican manufacturing for the 1994–2002 period. We use different methodologies to check the robustness of our findings. In summary, we find that labor productivity (LP) increased at a yearly rate of 3 percent, while TFP had a negative annual rate of more than 0.6 percent. Overall, these results show that the post-NAFTA (North American Free Trade Agreement) period is similar in several respects to previous decades, despite the occurrence of considerable economic changes.Studies of Mexican productivity growth and competitiveness are in general motivated by one of the following reasons: measuring the impact of trade liberalization (Clerides, Lach, & Tybout, 1996; Fragoso Pastrana, 2003; Iscan, 1998; Robertson & Dutkowsky, 2002; Tybout & Westbrook, 1995) or testing convergence to the U.S. (Blomstrom & Wolff, 1989) or among states (López-Acevedo, 2002 and Koo, Deichmann, Fay, & Lall, 2002). Undoubtedly, the former is the dominant objective, but the latter attracted researchers’ attention after NAFTA. Our paper contributes to this literature by estimating productivity growth for the post-NAFTA period. Understanding the sources of productivity growth is a key concern of academics and policy makers. The second goal of this paper is to exploit the panel structure of our dataset to identify the elements associated with productivity growth. Bartelsman and Doms (2000) divide the sources of productivity growth into the following broad categories: international trade, quality of the labor force, technology and quality of institutions. We find that both LP and TFP growth rates are higher in sectors that are export-oriented, and those that had the highest investment rates. More interestingly, however, exports are associated with productivity growth only if they are accompanied by high investment ratios. Therefore, exporting per se does not guarantee productivity growth. Moreover, we found that productivity growth was higher in sectors with abundant low-skilled labor (as measured by the average schooling) and with low ratios of blue collar to white collar workers. Finally we found that labor costs are negatively associated with TFP growth. The paper is organized as follows. Section 2 sets out the theoretical and empirical approach and reviews previous studies of Mexico. Section 3 describes the data sources and assesses their limitations. Section 4 estimates labor and total factor productivity growth in the manufacturing sector and Section 5 analyze the sources of productivity growth. Conclusions are in the final section.

From an historical perspective, the post-NAFTA period is no different in many aspects from earlier decades. We calculated LP and TFP trends for the manufacturing sector using the EAI. The former increased over the period at an average annual rate of 3 percent, while the latter has zero or negative evolution for the same years: our preferred methodology showed a negative yearly rate of at least 0.6 percent. We also studied the sources of productivity growth. In particular, we evaluated the effect generated by exports and acquisition of new capital goods (both with a positive effect), and labor costs (negatively correlated with TFP growth). Moreover, we found that productivity growth was higher in sectors with medium-size firms and relatively abundant low-skilled labor. This result is in line with the idea that NAFTA favored sectors relatively abundant in non-skilled labor. Finally, we contributed to the debate about the effect of labor costs on productivity growth. We found that sectors that have a relatively high burden of labor costs (as measured by the ratio of non-wage to total labor costs) have low TFP growth.