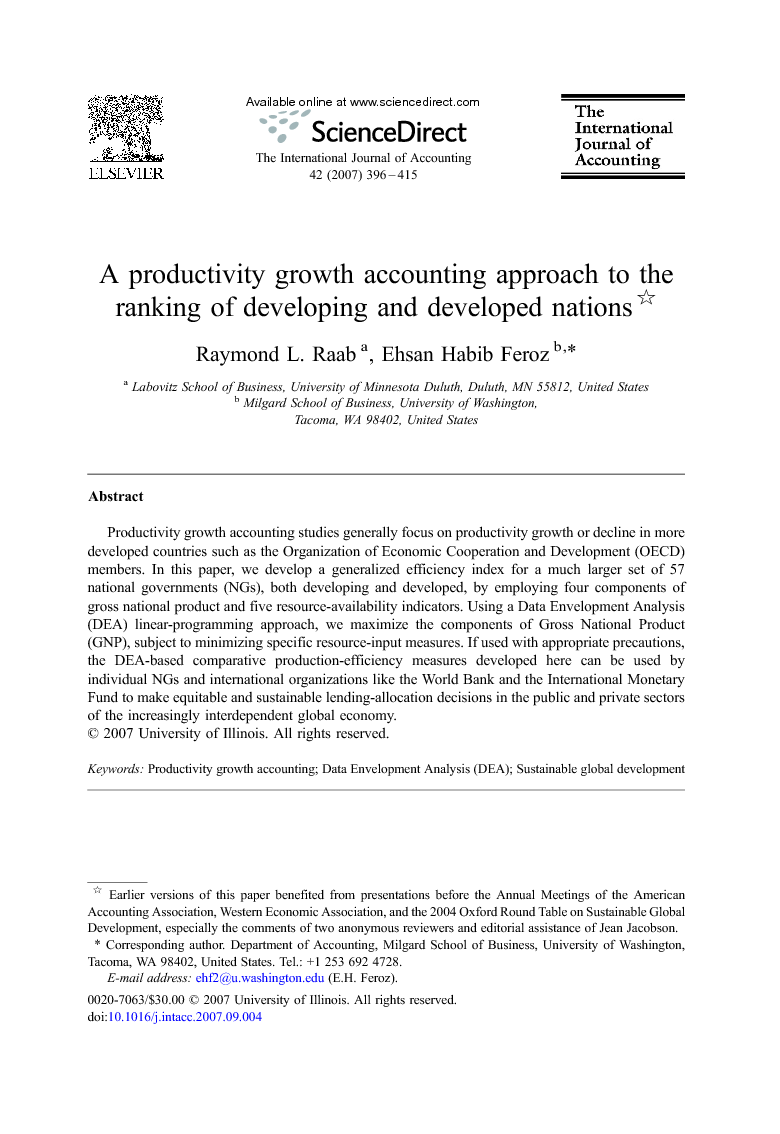 Productivity growth accounting studies generally focus on productivity growth or decline in more developed countries such as the Organization of Economic Cooperation and Development (OECD) members. In this paper, we develop a generalized efficiency index for a much larger set of 57 national governments (NGs), both developing and developed, by employing four components of gross national product and five resource-availability indicators. Using a Data Envelopment Analysis (DEA) linear-programming approach, we maximize the components of Gross National Product (GNP), subject to minimizing specific resource-input measures. If used with appropriate precautions, the DEA-based comparative production-efficiency measures developed here can be used by individual NGs and international organizations like the World Bank and the International Monetary Fund to make equitable and sustainable lending-allocation decisions in the public and private sectors of the increasingly interdependent global economy.

Productivity literature has generally focused on growth or slowdown in the developed OECD (Organizations of Economic Cooperation and Development) countries during the seventies and eighties (Costello, 1993, Fare et al., 1994 and Wolff, 1996). Although there has been a growing interest in productivity growth (decline) in highly developed nations, we have not seen a similar focus applied to a broader range of developing countries across the new world economies. The productivity winners and losers in the new global-information economies need to be identified and analyzed, both at the aggregate and individual country level. This is relevant since productivity rankings provide important inputs for sustainable and equitable resource-allocation decisions by national governments (NGs hereafter), as well as by international organizations like the World Bank and International Monetary Fund. Presumably, financial markets around the globe impound the GNP-and-GDP related aggregates, which are crude measures of productivity, in the pricing of foreign (national) currencies and debts issued by national governments. Decision makers may also use subjective rank ordering of productivity, as reflected in the various testimonies of the Federal Reserve Board Chairman before Congress.1 The importance of the rank ordering made by NGs, in terms of sustainable productivity, has been recognized, [though not technically possible in classics such as Adam Smith's The Wealth of Nations, (1776; reprinted 1953, pp. 3–4.)] Nations tolerably well advanced as to skill, dexterity and judgment in the application of labour, have followed very different plans in the general conduct or direction of it; those plans have not all been equally favourable to the greatness of its produce. The policy of some nations has given extraordinary encouragement to the industry of the country;… In this paper we develop a more generalized linear-programming approach to rank 57 NGs in terms of overall production efficiency. Unlike traditional aggregate productivity measurements such as those generated by Cobb–Douglas functions, we use linear programming to measure and rank relative technical efficiency. This approach can include a large number of countries, in various stages of development (sustainable or not), employing resources to produce the various components of GNP. Data Envelopment Analysis (DEA) ranks relative efficiency by evaluating the extent to which the NG of each country minimizes input components (to be efficiently allocated), and maximizes the output components that comprise the GNP. The NG in each country is assumed to choose particular weights or coefficients for inputs and outputs that allow the country to achieve its maximum efficiency ranking.2 In the conventional productivity growth studies that employ regression weights a single transformation function for all NGs is implied, or else subjective fixed weights are utilized. In our DEA approach, differing sustainable growth strategies followed by different NGs are accommodated by different coefficient weights for each NG. From these more flexible transformation functions we can identify the sources of efficiency or inefficiency for every NG included in our analysis. The rest of the paper is as follows. Section 2 describes the DEA National Governmental Model employed to rank 57 NGs' productivity efficiency. Section 3 describes the empirical model employ and the data set used in measuring NGs' production efficiency. Sections 4 presents the basic results of the additive model and sensitivity analysis, and section 5 compares the additive to the ratio model's results. Section 6 partitions the 57-NG frontier into separate high- and low-income frontiers and examines the differences between the two. Section 7 looks at possible institutional explanations for the observed relative-efficiency differences. Section 8 provides a conclusion and discusses the governance and sustainable global-development implications of production-efficiency rankings.

The main contribution of this study is to provide a generalized linear-programming approach to international production-efficiency rankings, which can be applied to a wide range of NGs in various stages of sustainable development. Although our approach is comparable to Lovell and Pastor (1998), we provide stability rankings that are easily interpretable by decision makers and comparable across a wide range of NGs, developing and developed. Our approach has the advantage of comparing a large number of NGs in various stages of sustainable development on a comparable metric of inputs and outputs, allowing the individual NGs to choose appropriate transformation frontiers in determining the relationships between inputs and outputs. Our results are generally consistent with earlier productivity growth accounting studies, particularly those related to the OECD countries. However, there are also some new counter-intuitive insights to be gained from this approach: some less developed NGs seem to be sustained by rather high levels of efficiency, given their choice of inputs and outputs. While our choice of inputs and outputs was motivated by incremental contribution to overall sustainable efficiency, it is noteworthy that the choice of inputs and outputs may influence stability index rankings. These results, subject to the caveats implied by econometric assumptions and choice of inputs and outputs, do have implications for sustainable resource-allocation decisions (both at the national and international levels) and country risk analysis for investment, credit, and foreign aid decisions by international agencies. As in Adam Smith (1953) cited earlier, NGs could follow very “different plans [input and output mix in our DEA context] in the general conduct or direction” to sustainable productivity growth. For example, the Bangladeshi strategy to sustainable productivity growth need not be identical to that of the United States. In this sense, a “cookie cutter” approach to productivity growth (or development) often imposed by an international lender or agency such as the IMF or World Bank could be ineffective, if not detrimental, to the sustainable productivity growth of a less developed country. It appears that sustainable productivity growth models for “nations tolerably well advanced as to skills, dexterity and judgment in application of labor” need not be the same as for those NGs who are not nearly as “well advanced as to skills, dexterity and judgment in the application of labor” and other inputs in order to generate and sustain a certain level of outputs. Economic development and productivity growth in the post World War II period have largely followed the footsteps of the more developed NGs-high GNP frontier in our analysis or OECD countries in the earlier studies (Solow, 1987). Perhaps, it's time for the less developed NGs to try not to simply mimic the more developed NGs. Instead, every NG needs to take a serious look at its own history, religious diversity, demographic trends, and comparative advantage regarding the inputs and input mix vis-à-vis the desired level of output within the context of global economy. In short, one generic model of sustainable productivity growth may not fit all NGs. Every NG needs to tailor its strategic plan for sustainable productivity growth, keeping in mind its own relative advantages in terms of inputs and outputs. One of the more interesting policy questions that arise from our empirical findings is as follows: Should an international lending agency such as the World Bank or IMF allocate more resources to NGs with higher or lower efficiency scores? We respond to this question at two levels. Strictly speaking, on the grounds of investor protection and production efficiency, NGs with higher efficiency scores are more likely to make more productive uses of these resources than those with lower efficiency scores. However, production efficiency might be one of the many factors influencing policy makers. For example, on the grounds of sustainable and equitable global development, one could argue that NGs with low efficiency scores should be provided with more resources to see if that will help them improve and sustain their efficiency. Although some infra-structural resources are indispensable for any NG to sustain and equitably compete in the global economy, there is little or no evidence that more resources beyond a certain threshold necessary for minimum sustainability will provide incentives to the NG to be more efficient. Finally, we believe that production efficiency should be as important a consideration as the aggregate wealth measured by GDP and GNP in sustainable resource-allocation decisions at the national and international public and private sector levels. Comparative statistics that are simply based on aggregate measures such as GNP and GDP without accounting for productivity growth can be inadequate if not misleading. At this point, we do not have a good understanding of how productivity growth measures are precisely impounded by the international financial and commodity markets into the pricing of foreign currency, commodities, and foreign (and national) bond ratings; that would certainly be a fruitful direction to follow from these results.