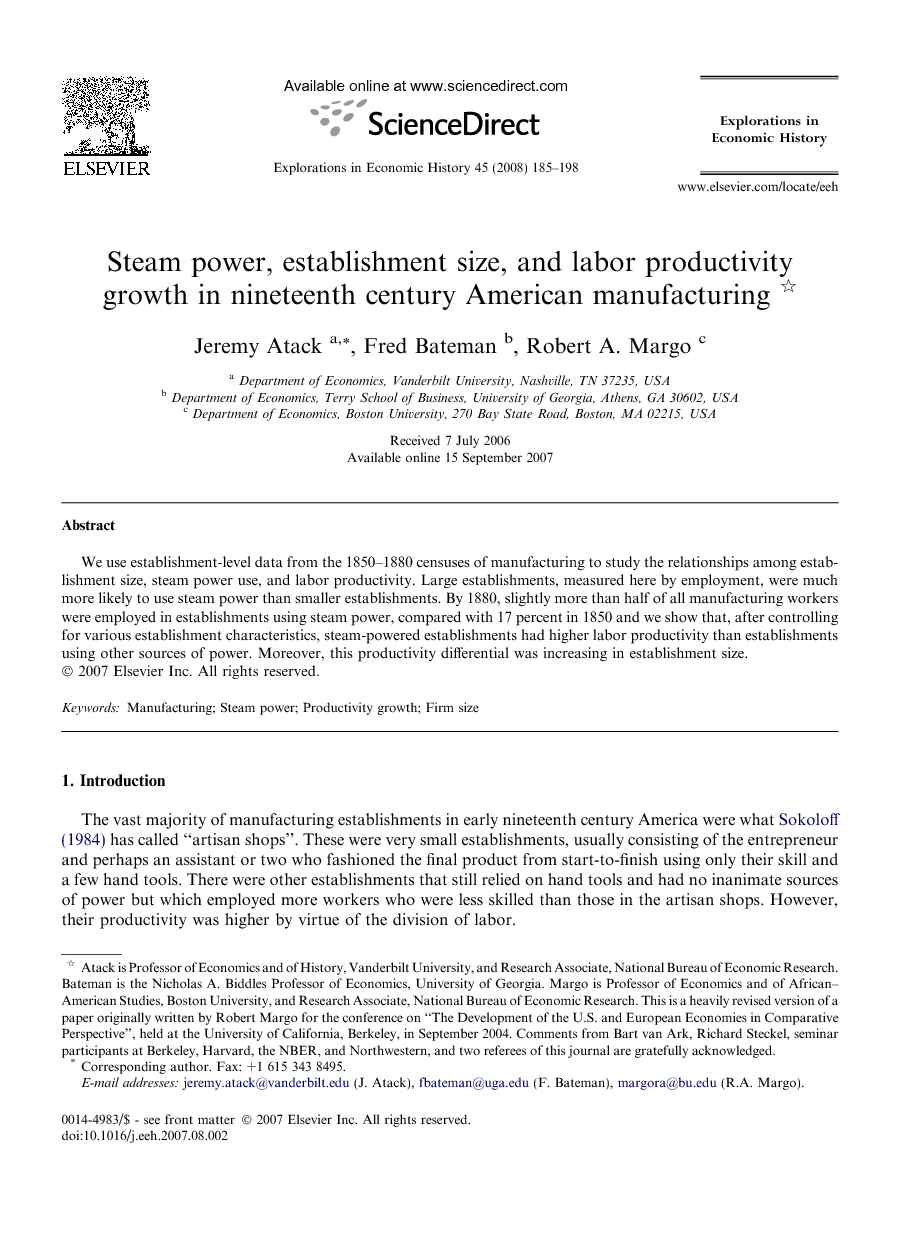 The vast majority of manufacturing establishments in early nineteenth century America were what Sokoloff (1984) has called “artisan shops”. These were very small establishments, usually consisting of the entrepreneur and perhaps an assistant or two who fashioned the final product from start-to-finish using only their skill and a few hand tools. There were other establishments that still relied on hand tools and had no inanimate sources of power but which employed more workers who were less skilled than those in the artisan shops. However, their productivity was higher by virtue of the division of labor. Labor productivity could also be increased through the use of powered machinery such as lathes, power looms, and drill presses. Power had long been supplied by falling water but steam technology increasingly caught the attention of contemporaries. The diffusion of light, simple, and cheap high pressure engines along the lines pioneered by Oliver Evans fit well with relative factor prices in America (Habakkuk, 1967). These had a voracious appetite for fuel and a relatively short-life expectancy but were relatively cheap and easy to manufacture, ship and set-up (Atack, 1979 and Hunter, 1985). Consequently, establishments using steam power could be much more “footloose” than those relying upon water especially after fuel prices fell. The wide variety of applications and scales to which these engines could be adapted also qualifies them as a “general purpose technology”—that is, a technology that is adaptable to a wide range of uses and for which there may be external economies.1 Manufacturing establishments using water power, on the other hand, had to locate at one of the limited suitable sites and their potential power was limited by the stream flow and the height of the water’s fall.2 Although economic historians have written extensively about the diffusion of steam (Temin, 1966, Atack, 1979, Atack et al., 1980 and Hunter, 1985) surprisingly little attention has been paid to the role played by establishment size and attendant productivity effects.3 To this end, we use data for individual manufacturing establishments to examine the use of steam power and its impact on labor productivity in American manufacturing between 1850 and 1880, paying particularly close attention to differences by establishment size. We focus on the period from 1850 to 1880 because it is during this period that steam power began to diffuse in earnest, whereas, after 1880, electrical power increasingly became an alternative (Atack et al., 1980 and Devine, 1983). Furthermore, excellent data are available at the establishment level for this period unlike for later in the nineteenth or early in the twentieth century. We have three principal findings. First, the likelihood of adopting steam power was increasing in establishment size. This is consistent with the hypothesis that the availability of steam power was a factor behind the growth of large-scale enterprises which played a central role in the United States’ ascendancy as the leading industrial nation by World War One (Wright, 1994, Broadberry, 1994, Broadberry, 1997 and Broadberry and Irwin, 2006). Second, plants using machinery that was powered by steam or water had higher labor productivity than non-powered establishments, although most of these differences were due to higher capital intensity in powered establishments rather than the source of power itself. Third, even after controlling for capital intensity, steam-powered “factories”—a label which we apply to establishments with 16 or more employees (see Sokoloff, 1984 and Sokoloff, 1986)—had significantly higher total factor productivity than steam-powered plants with fewer than 16 employees.4

Over the course of the nineteenth century, steam and water power technologies improved dramatically but steam became the power source of choice for manufacturing establishments. Previous work has neglected an important feature of this diffusion—namely, the positive relationship between the size of the establishment as measured by employment and the use of steam. Establishments became larger when they adopted powered machinery because there were gains to be realized through the enhanced division of labor as well productivity gains from higher capital intensity,. For most establishments, steam was a better choice than water when they sought to mechanize and when they became larger, because the costs of steam (per required horsepower) relative to water were less for larger than for smaller establishments. When we measure the incidence of powered machinery at the establishment level, there is little evidence of a trend towards a greater proportion of such establishments over the period covered in this paper, 1850 to 1880. However, when we measure the proportion of workers employed in establishments that were powered by steam or water, this proportion rises over the period, entirely because of a pronounced movement towards steam. This trend occurs precisely because steam power and establishment size were positively related. It is difficult to compare our findings with those of other recent studies of the economic impact of steam because these other studies have largely focused on aggregate productivity effects rather than productivity in manufacturing but studies by Crafts (2004) and von Tunzelman (1978) for Great Britain found only modest gains. At the same time, it is important to emphasize that our analysis controls, in a very flexible way, for the direct effects of establishment size per se. Economies of scale arising through an enhanced division of labor as a consequent of the application of powered machinery were difficult to capture through traditional waterpower which was not as reliable as steam and which faced significant rising marginal costs of use as output increased compared with steam. Because manufacturing accounted for a relatively small fraction of aggregate output in the nineteenth century United States, our results do not imply that the diffusion of steam dramatically altered the course of aggregate productivity growth. Nevertheless, they show that the diffusion of steam raised labor productivity in manufacturing and, if this diffusion had not occurred, the pace of industrialization would have been slower. Indeed, considering all of the specific technologies that diffused in manufacturing between 1850 and 1880, none may have had a bigger impact, in the sense of affecting more manufacturing workers, than the shift to steam power.