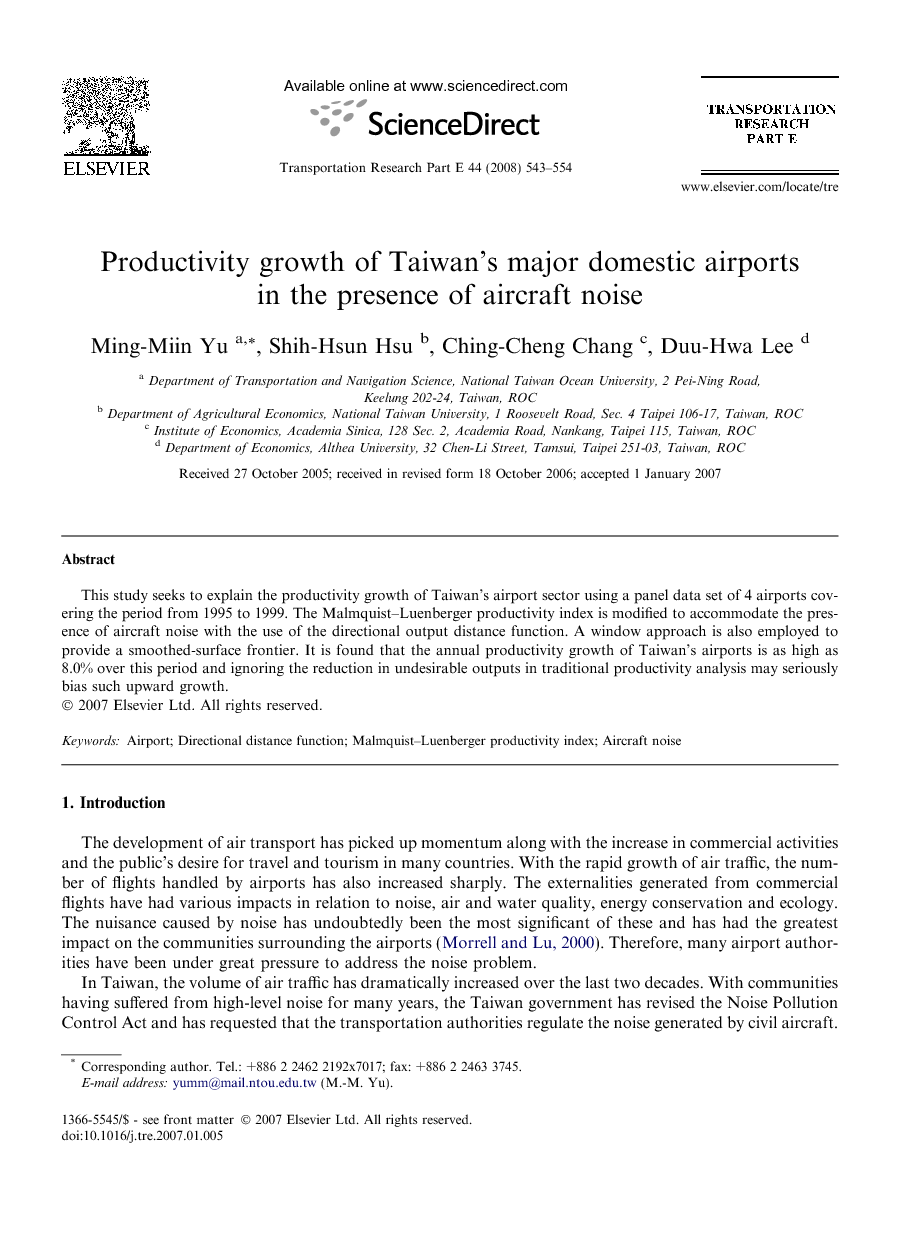 This study seeks to explain the productivity growth of Taiwan’s airport sector using a panel data set of 4 airports covering the period from 1995 to 1999. The Malmquist–Luenberger productivity index is modified to accommodate the presence of aircraft noise with the use of the directional output distance function. A window approach is also employed to provide a smoothed-surface frontier. It is found that the annual productivity growth of Taiwan’s airports is as high as 8.0% over this period and ignoring the reduction in undesirable outputs in traditional productivity analysis may seriously bias such upward growth.

The development of air transport has picked up momentum along with the increase in commercial activities and the public’s desire for travel and tourism in many countries. With the rapid growth of air traffic, the number of flights handled by airports has also increased sharply. The externalities generated from commercial flights have had various impacts in relation to noise, air and water quality, energy conservation and ecology. The nuisance caused by noise has undoubtedly been the most significant of these and has had the greatest impact on the communities surrounding the airports (Morrell and Lu, 2000). Therefore, many airport authorities have been under great pressure to address the noise problem. In Taiwan, the volume of air traffic has dramatically increased over the last two decades. With communities having suffered from high-level noise for many years, the Taiwan government has revised the Noise Pollution Control Act and has requested that the transportation authorities regulate the noise generated by civil aircraft. The Environmental Protection Administration (EPA) has additionally drafted the Airport Environs Aircraft Noise Control Regulations as a basis for controlling ambient noise in the vicinity of airports and has set its own criteria for airport noise as well as drawing up a noise abatement plan and a homeowner’s insulation program. To tighten the enforcement of such legislation and implement effective noise control, the EPA has asked airports to adjust takeoff and landing times and routes and place restrictions on stationary engine testing and training flights. In addition, all airports and city governments have established “aircraft noise control enforcement taskforces” responsible for allocating subsidies for the installation of aircraft noise control equipment in schools, libraries, medical establishments and homes located in areas adjacent to airports. Beginning in 1992, the EPA installed noise monitoring systems in six major airports. The Civil Aeronautics Administration (CAA) subsequently installed a second set of such systems in five other airports in 1997, which it later supplemented with the latest in noise monitoring equipment in 2000. Both regulators and airport management authorities need information regarding the efficiency of airports. An airport can be labeled as inefficient because of its not being used to full capacity due to efforts to control noise. In light of the fact that undesirable outputs (noise) are often produced together with desirable outputs (commercial flights), a comprehensive evaluation of airport efficiency should consider the trade-off between capacity utilization and noise control. A number of studies on airport performance and productivity have recently appeared in the literature (e.g., Gillen and Lall’s, 1997, Gillen and Lall’s, 1998, Hooper and Hensher’s, 1997, Murillo-Melchor’s, 1999 and Pels et al.’s, 2003). Most of these studies, however, place less emphasis on the undesirable noise problem and how these environmental regulations affect airport performance. That is the theme of this paper and a gap this paper seeks to fill. In this paper, a productivity index for assessing airport performance is constructed to deal with the disposal of undesirable outputs, and to credit airports for taking measures to reduce aircraft noise while providing desirable services. Since the seminal paper of Farrell (1957), a large number of studies have measured production efficiency by modeling technology using mathematical programming techniques, and have provided an elegant way of simultaneously constructing frontier technology from data and calculating the distance to that frontier for individual observations or activities. Moreover, Afriat’s, 1972 and Shephard and Färe’s, 1974, in two important early papers, showed how the restriction that technology satisfies the assumptions of constant returns to scale and a strong disposability of inputs and outputs, respectively, can both be relaxed. This piecewise linear technology has been widely used in empirical production studies. However, when certain outputs are undesirable, they may yield biased measures of efficiency if only “goods” are valued and “bads” are ignored. It thus makes sense to credit producers for their provision of desirable outputs and penalize them for their provision of undesirable outputs. Along the lines of this argument, Färe et al. (1989) extended Farrell’s measure of technical efficiency to allow for an asymmetric treatment of inputs, desirable outputs and undesirable outputs. With regard to productivity growth, the traditional Malmquist productivity index (MPI) has become very popular because it rests exclusively on the quantity of information, and requires neither price information nor a behavioral assumption in its construction. Changes in the MPI can be further decomposed into the components of efficiency change and technical change and offer more insights into the sources of productivity growth. In the presence of undesirable outputs, MPI is particularly attractive because there is no market price information concerning the bad outputs. Chung et al. (1997) developed a new index that is referred to as the Malmquist–Luenberger productivity index (MLPI) to allow for the possibility of crediting firms for the reduction in undesirable outputs. A directional output distance function is used to replace Shephard’s (1970) output distance function on which the conventional MPI is based. The objective of this paper is to assess the productivity growth in Taiwan’s major domestic airports in the presence of environmental externalities and efforts to control these undesirable externalities. Using Chung et al.’s MLPI approach, both the aircraft noise and regulations designed to internalize them are taken into account, assuming that good outputs are freely disposable whereas the disposal of bad outputs is deemed costly. In addition, in order to obtain a “smoothed-surface” frontier over the sample period, we introduce window data envelopment analysis (DEA) into the MLPI approach. By this means, we can overcome the problem of unstable productivity indices produced by the standard DEA models. The remainder of this paper is organized as follows. Section 2 introduces the directional distance function approach and how the MLPI can be calculated. Data descriptions and empirical results on both the conventional MPI and extended MLPI are provided in Sections 3 and 4, respectively. Section 5 summarizes the findings.

Performance evaluation has been considered to be important for both the airport authorities and the government. There are many potential benefits from performance evaluation. In particular, information will be collected and given to the authorities to identify areas that are performing well and also those areas where appropriate corrective actions need to be taken. While many people enjoy the comfort and convenience brought about by air transport, many people suffer from the negative impact of aircraft noise, especially in densely-populated regions. Residents in close proximity to airports have often complained and asked for compensation for the damage caused, resulting in changes in flight operating procedures from time to time. Therefore, the undesirable nature of aircraft noise is too important to ignore in seeking to provide a more reliable evaluation of the performance of airports. Following Chung et al. (1997), this paper computes for domestic airports in Taiwan the Malmquist–Luenberger productivity index, which accounts for reductions in aircraft noise. Our results show that clear differences arise within our small sample when computing the conventional MPI and extended MPIE and MLPIE for four domestic airports during the 1995–1999 period. If we were to ignore undesirable outputs, the average TFP growth would increase almost threefold (from 8.0% to 22.6%) over the sample period. Should reductions in aircraft noise be important in the vicinity of airports, their omission will result in managers and policy-makers who are seeking signals to expand capacity receiving biased performance signals. A primary emphasis has been placed on directional distance functions and window DEA. We use the former to overcome the computational problems when some outputs are undesirable, and employ the latter to overcome the problems associated with constructing a sensible “smoothed-surface” frontier when the sample size is too small. On average the TFP growth was found to be driven largely by gains in efficiency improvement rather than by adopting new technologies. In this regard, it is important for Taiwan to seriously consider the potential importance of upgrading its air traffic facilities so that airport productivity can be improved in conjunction with a reduction in aircraft noise. Lastly, the MLPI adopted in this paper has enabled possible sources of productivity growth to be quantified, and some suggestions for possible reasons for the trends observed have been put forth. This method may be suitable for examining the implications of reducing undesirable externalities on the productivity of a regulated or monopolized sector. For measuring the performance of a less-regulated and more profit-driven sector, an extension to include allocative efficiency (or profit efficiency) as in the case of Chambers and Färe (2004) may provide more insight into the trade-offs between desirable and undesirable outputs. This important exercise, which is necessary in order to draw specific policy implications, is recommended for future research.