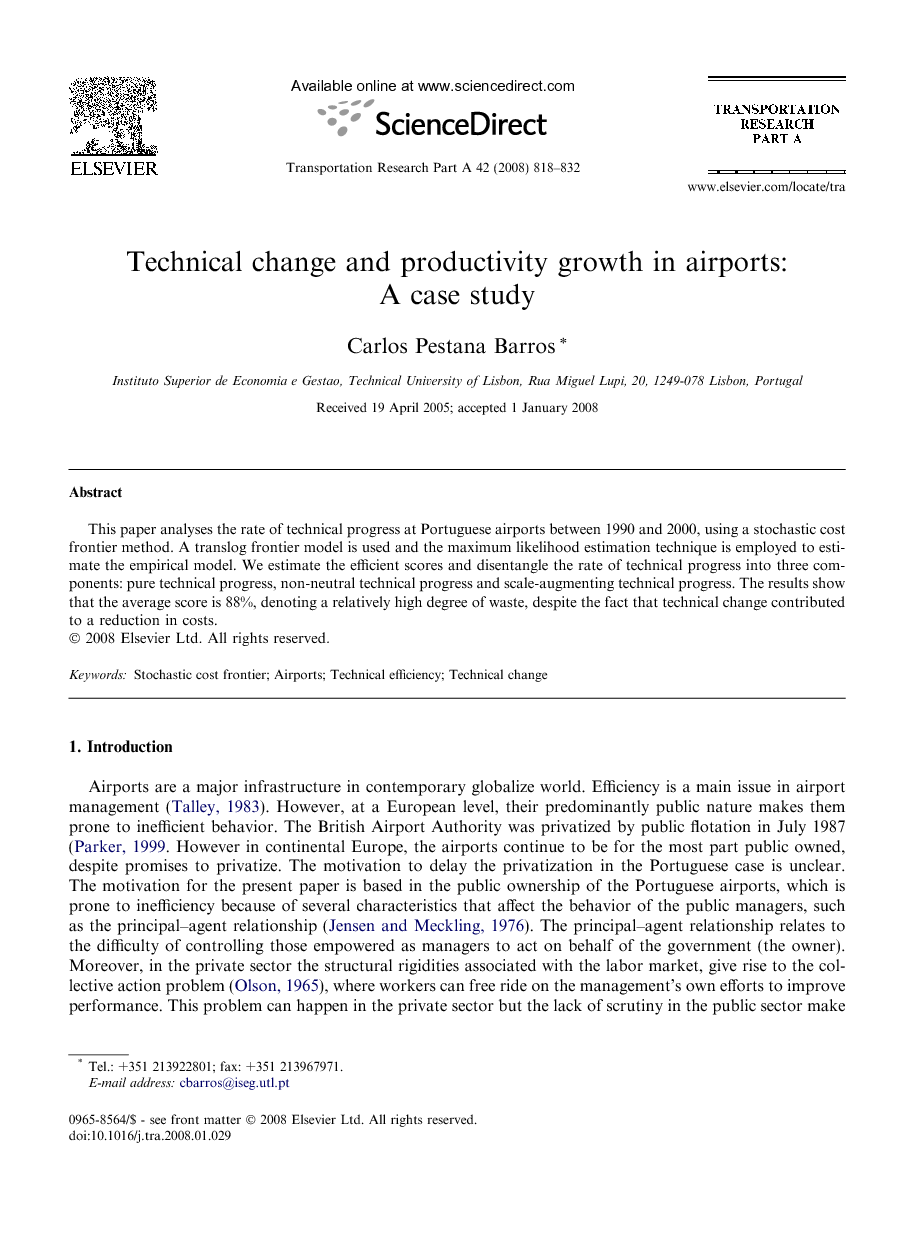 Airports are a major infrastructure in contemporary globalize world. Efficiency is a main issue in airport management (Talley, 1983). However, at a European level, their predominantly public nature makes them prone to inefficient behavior. The British Airport Authority was privatized by public flotation in July 1987 (Parker, 1999. However in continental Europe, the airports continue to be for the most part public owned, despite promises to privatize. The motivation to delay the privatization in the Portuguese case is unclear. The motivation for the present paper is based in the public ownership of the Portuguese airports, which is prone to inefficiency because of several characteristics that affect the behavior of the public managers, such as the principal–agent relationship (Jensen and Meckling, 1976). The principal–agent relationship relates to the difficulty of controlling those empowered as managers to act on behalf of the government (the owner). Moreover, in the private sector the structural rigidities associated with the labor market, give rise to the collective action problem (Olson, 1965), where workers can free ride on the management’s own efforts to improve performance. This problem can happen in the private sector but the lack of scrutiny in the public sector make the public enterprises more prone to the collective action problem. Finally, organizational factors associated with X-efficiency (Leibenstein, 1966) are common in the public enterprises. X-inefficiency is an undefined type of efficiency that is related to the fact that the production function is not completely specified or known, the contracts for labor are incomplete and not all inputs are marketed on equal terms to all buyers. These characteristics arise from bounded rationality and a complex or uncertain environment. In this situation the public management may be unable to achieve the efficiency frontier. An additional motivation for the present paper is the increase in low-price air travel companies operating at European level, which complaint from the higher airport fees. The monopoly position of the Portuguese airports and the centralized management by the Ministry of transports, make them not open to lower the fees and attracting more traffic. Moreover, the government has a national airline, which is protected with preferential fees, by the main Portuguese airports. A complaint from a private airline at European Union resulted in the condemnation of the Portuguese airports. Based in this motivation this paper explores the use of stochastic frontier model as an instrument for assessment of the effectiveness of airports aimed at reducing squandering in airports. More precisely we analyze the airport efficiency decomposing the productivity growth in, first, pure technical change, an effect associated to managerial skills; second, non-neutral change associated to the price of production factors, which translates into change of the inputs mix. Finally, scale augmenting technical change, inherent to the quantities of the outputs produced. Stochastic frontier models in airports have been addressed rarely (Pels et al., 2001 and Pels et al., 2003). Following Farrell (1957), researchers applying frontier estimation techniques represent technology by a bounding function that reflects best-practice production, defined in terms of the maximum real output technologically possible to produce given available inputs. Following Farrell (1957), two scientific methods to analyze efficiency quantitatively are the econometric frontier and data envelope analysis (DEA). DEA is the most common method used to analyze airports. Gillen and Lall, 1997, Parker, 1999, Murillo-Melchor, 1999 and Yoshida and Fujimoto, 2004 have used DEA in airports among others. Both methods have their advantages and drawbacks. Unlike the econometric stochastic frontier approach, the DEA permits the use of multiple inputs and outputs, but does not impose any functional form on the data, neither does it make distributional assumptions for the inefficiency term. Both methods assume that the production function of the fully efficient decision unit is known. In practice, this is not the case and the efficient isoquant must be estimated from the sample data. In these conditions, the frontier is relative to the sample considered in the analysis. An important advantage of the econometric frontier is that there are a number of well-developed statistical tests to investigate the validity of the model specification – Tests of significance for the inclusion or exclusion of factors, or for the functional form. The accuracy of this hypothesis depends to some extent on the assumption of normality of errors, which is not all times fulfilled. A second advantage of the econometric frontier is that if a variable which is not relevant is included it will have a low or even zero weighting in the calculation of the efficient scores, so its impact is likely to be negligible. This is an important difference from DEA where the weights for a variable are usually unconstrained. A third advantage of the econometric frontier is that it allows the decomposition of deviations from efficient levels between “noise” (or stochastic shocks) and pure inefficiency, meanwhile the DEA classifies the whole deviation as inefficiency. In this paper we analyze the efficiency of the Portuguese main airports from 1990 to 2000, with a stochastic frontier model. We extend previous research, in airports using a translog frontier model and disentangling technical efficiency change. The paper is organized as follows: in Section 2, we describe the institutional setting. In Section 3, a review of the literature existing in this field appears. In Section 4, the theoretical framework is explained. In Section 5, the data and results are presented. In Section 6, the decomposition of technical efficiency is presented. In Section 7, the results are discussed. In Section 8, the contributions and limitations of the present research are presented. Finally, in Section 9, the conclusions are given.

This article has proposed a simple framework for the evaluation of Portuguese airports and the rationalization of their operational activities. The analysis is based on a stochastic translog cost frontier model that allows for the incorporation of multiple price inputs and outputs in determining the relative efficiencies. Benchmarks are provided for improving the operations of the more poorly performing airports. The disentangling of the components of technical efficiency change into pure technical change, non-neutral technical change and scale-augmenting technical change is presented. Several interesting and useful policy insights and implications from the study are raised. The general conclusion is that the most important airports analyzed are efficient, while a proportion of the less important airports are revealed to be inefficient when the benchmark used is the mean or the median. The results suggest that capital, prices, sales to planes, sales to passengers and aeronautical fee is the main determinant factors of efficiency in this sector. A public policy to improve efficiency should take into account these results. More investigation is needed to address the limitations mentioned.