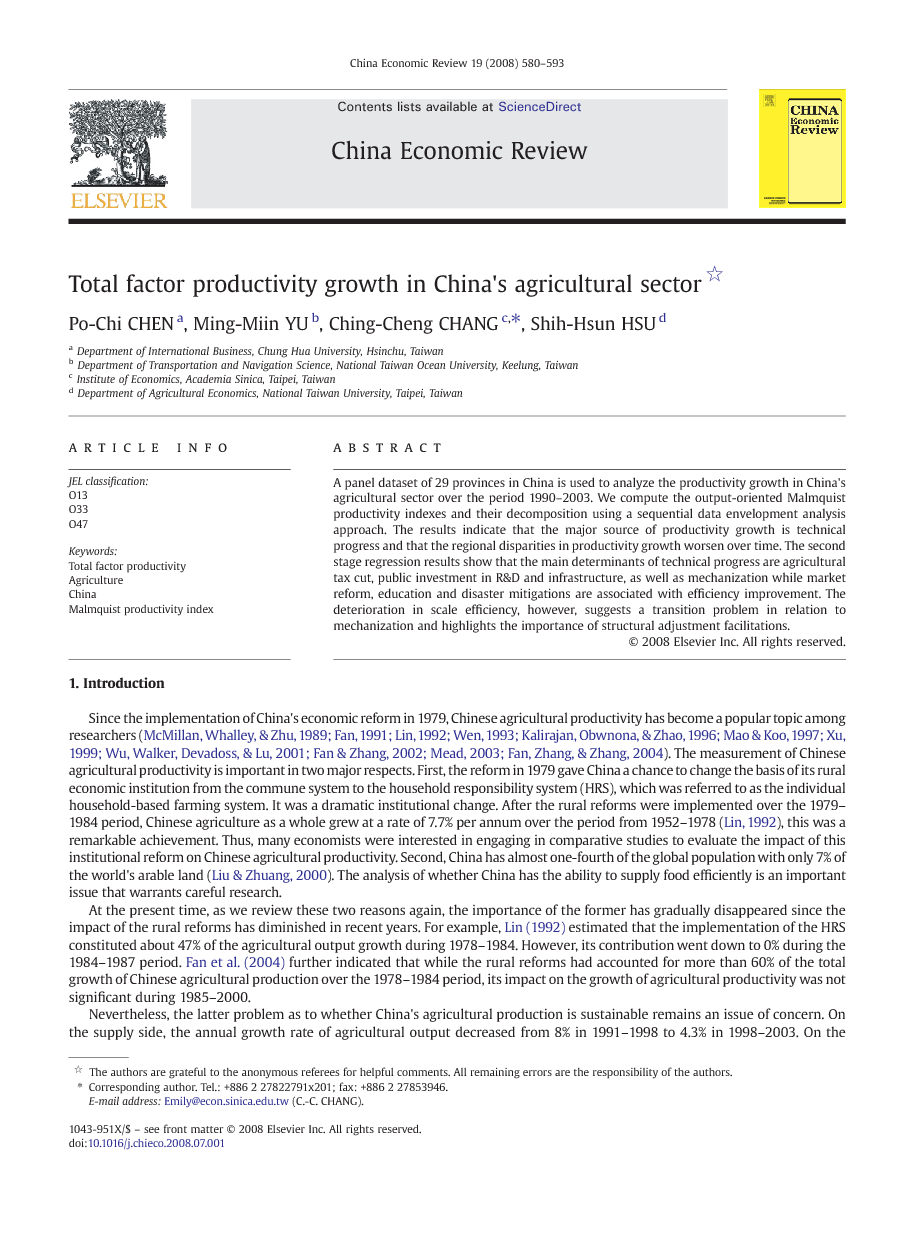 A panel dataset of 29 provinces in China is used to analyze the productivity growth in China's agricultural sector over the period 1990–2003. We compute the output-oriented Malmquist productivity indexes and their decomposition using a sequential data envelopment analysis approach. The results indicate that the major source of productivity growth is technical progress and that the regional disparities in productivity growth worsen over time. The second stage regression results show that the main determinants of technical progress are agricultural tax cut, public investment in R&D and infrastructure, as well as mechanization while market reform, education and disaster mitigations are associated with efficiency improvement. The deterioration in scale efficiency, however, suggests a transition problem in relation to mechanization and highlights the importance of structural adjustment facilitations.

Since the implementation of China's economic reform in 1979, Chinese agricultural productivity has become a popular topic among researchers (McMillan et al., 1989, Fan, 1991, Lin, 1992, Wen, 1993, Kalirajan et al., 1996, Mao and Koo, 1997, Xu, 1999, Wu et al., 2001, Fan and Zhang, 2002, Mead, 2003 and Fan et al., 2004). The measurement of Chinese agricultural productivity is important in two major respects. First, the reform in 1979 gave China a chance to change the basis of its rural economic institution from the commune system to the household responsibility system (HRS), which was referred to as the individual household-based farming system. It was a dramatic institutional change. After the rural reforms were implemented over the 1979–1984 period, Chinese agriculture as a whole grew at a rate of 7.7% per annum over the period from 1952–1978 (Lin, 1992), this was a remarkable achievement. Thus, many economists were interested in engaging in comparative studies to evaluate the impact of this institutional reform on Chinese agricultural productivity. Second, China has almost one-fourth of the global population with only 7% of the world's arable land (Liu & Zhuang, 2000). The analysis of whether China has the ability to supply food efficiently is an important issue that warrants careful research. At the present time, as we review these two reasons again, the importance of the former has gradually disappeared since the impact of the rural reforms has diminished in recent years. For example, Lin (1992) estimated that the implementation of the HRS constituted about 47% of the agricultural output growth during 1978–1984. However, its contribution went down to 0% during the 1984–1987 period. Fan et al. (2004) further indicated that while the rural reforms had accounted for more than 60% of the total growth of Chinese agricultural production over the 1978–1984 period, its impact on the growth of agricultural productivity was not significant during 1985–2000. Nevertheless, the latter problem as to whether China's agricultural production is sustainable remains an issue of concern. On the supply side, the annual growth rate of agricultural output decreased from 8% in 1991–1998 to 4.3% in 1998–2003. On the demand side, with the growing population and rapid economic development, China's demand for food is expected to increase continuously (Zhu, 2004). It has been estimated that China's population will increase from 1.34 billion in 2005 to 1.38 billion in 2010, which reflects an increase of about 8 million people each year (Tian, 2004). Some of the agricultural production resources, such as cultivated land, irrigated water and the rural agricultural labor force, are decreasing as the economy further develops (Mao, 2000 and Tian, 2004). It can be seen that, between 1990 and 2003, China's rural labor force declined by 0.5% annually. The total cultivated area also decreased from 1.95 billion acres in 1996 to 1.84 billion acres in 2004, and the average cultivated area per farm was only 1.41 acres, which was less than one third of the world average (Tian, 2004). Besides these trends, the marginal productivity of fertilizer, which was the input with the most important contribution to the growth of output in the 1980s,1 appears to have been diminishing. On average, instead of producing 11.56 kg of crops as it did over the period 1981–85, one more kilogram of fertilizer used could only produce an additional 2.03 kg of crops in 1991–95 (Mao, 2000). It also goes without saying that, along with the rapid development of the industrial sector, the added stress on the environment (e.g., air pollution, acid rain and irrigated water pollution) has significantly threatened agricultural performance (Mao, 2000 and Tian, 2004). Following China's accession to the WTO, the traditional yield-enhancing measures, such as price support and input subsidies, have conflicted with the WTO's principles and will thus have to be abolished or significantly curtailed (Zhu, 2004). As a result, the trade status of agricultural commodities in China switched from a surplus to a deficit in 2004, something that had not happened since 1984 (Chen, 2005). In general, there are two major factors that contribute to the growth of output, namely, input growth and the change in total factor productivity (TFP). Faced with declining resources and the other problems mentioned above, it is apparent that the only way for China to raise its agricultural output is to increase TFP. Therefore, it is very important to identify the factors that can promote its agricultural productivity. The main purpose of this study is to measure Chinese agricultural TFP over the last decade using the Malmquist index and to investigate the factors that might explain the shift in technology and relative efficiency. The data used in this study consists of panel data for 29 provinces in mainland China over the period 1990–2003. The sequential data envelopment analysis (sequential DEA) approach proposed by Tulkens and Eeckaut (1995) is also used to rule out the possibility of technical regress.2 Then, the maximum likelihood estimation method is applied to identify the major determinants of TFP growth and its components. To be specific, the role of government policies, investment in infrastructure, the degree of market liberalization, and education in the process of TFP growth are investigated. The remainder of the paper is organized as follows. The next section briefly describes the methodology used to measure efficiency and productivity under sequential technology. Section 3 describes the dataset, and Section 4 measures TFP growth using the Malmquist (MALM) index approach. Regression results on the major determinants are presented in Section 5 followed by concluding remarks in the final section.

This study applies provincial-level data and provides new empirical evidence regarding the productivity of the agricultural sector in China over the period 1990–2003. A two-stage estimation procedure is applied. In the first stage, we compute the output-oriented MALM productivity indexes and their decompositions using a sequential DEA approach. In the second stage, the MLE approach is used to identify the major determinants of TFP growth and its components. The results indicated that national TFP grew at a rate of 1.5% annually over the entire period and that the major source of growth was technical progress. However, it should be noted that the efficiency performance has deteriorated over time. Therefore, in order to stimulate TFP growth, more attention should be paid to improving production efficiency. It was also found that pure efficiency did not recover until the late 1990s. Therefore, there seemed to be a time lag for the market system to be effective; thus, continuous market liberalization in the agricultural sector is encouraged. The rapid deterioration in scale efficiency during late 1990s to early 2000s also implies that policies should be enacted to support farmers' organizations and encourage cooperative movements. From the regional results, it is obvious that large disparities in TFP growth exist and have been widening over time, which suggests that close linkage building among regions via a well-functioned extension system should be developed and strengthened. In the second stage, we investigated the influence of government policies and investment in R&D, infrastructure and education on technical change, efficiency improvements, and TFP growth. The results show that the main determinants of technical progress in China's agriculture are agricultural tax cuts26 as well as public investments in R&D, infrastructure, and mechanization. In terms of the efficiency improvement, policy reforms, education and disaster mitigations are equally important options. Given the result that the main problem facing China's TFP growth is the deteriorations in scale efficiency, the crucial issue is perhaps less a question of optimal production technology, but more a question of well-functioning factor/product markets and marketing/logistic environment to facilitate adjustments that improve scale efficiency.