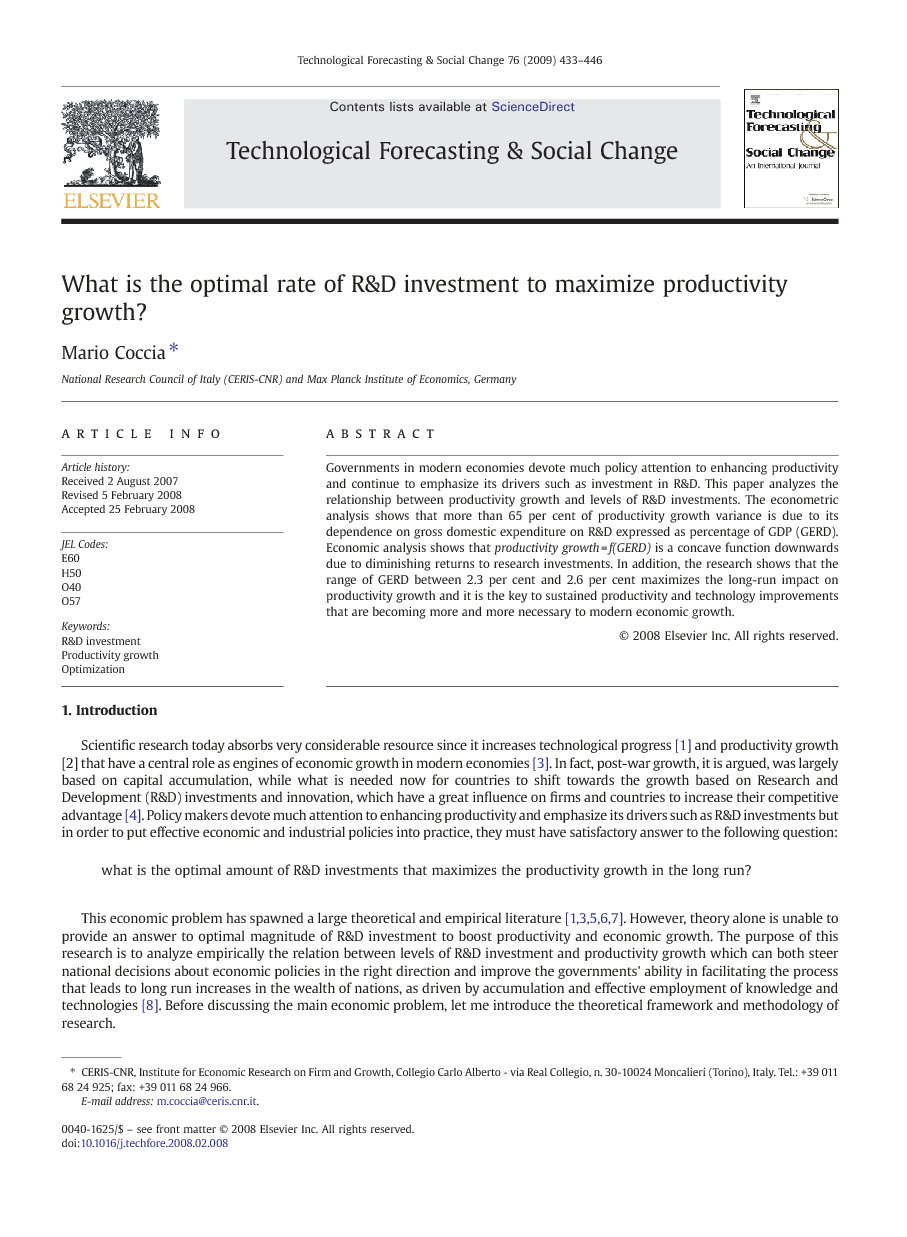 Scientific research today absorbs very considerable resource since it increases technological progress [1] and productivity growth [2] that have a central role as engines of economic growth in modern economies [3]. In fact, post-war growth, it is argued, was largely based on capital accumulation, while what is needed now for countries to shift towards the growth based on Research and Development (R&D) investments and innovation, which have a great influence on firms and countries to increase their competitive advantage [4]. Policy makers devote much attention to enhancing productivity and emphasize its drivers such as R&D investments but in order to put effective economic and industrial policies into practice, they must have satisfactory answer to the following question: what is the optimal amount of R&D investments that maximizes the productivity growth in the long run? This economic problem has spawned a large theoretical and empirical literature [1], [3], [5], [6] and [7]. However, theory alone is unable to provide an answer to optimal magnitude of R&D investment to boost productivity and economic growth. The purpose of this research is to analyze empirically the relation between levels of R&D investment and productivity growth which can both steer national decisions about economic policies in the right direction and improve the governments' ability in facilitating the process that leads to long run increases in the wealth of nations, as driven by accumulation and effective employment of knowledge and technologies [8]. Before discussing the main economic problem, let me introduce the theoretical framework and methodology of research.

Models of R&D-induced growth can serve as empirical templates to assess the potential of different growth policies for countries. Jaffe, Coe and Helpman, Engelbrecht, Lichtenberg and Van Pottelsberghe de la Potterie, Keller, Guellec and Van Pottelsberghe de la Potterie [51], [52], [53], [54], [55] and [33] have established that the level of TFP is influenced by the R&D stock in the OECD countries. However, only a few studies have examined whether semi-endogenous growth can account for the relationship between R&D expenditure and Total Factor Productivity (TFP). Semi-endogenous growth models relax the assumption of constant returns to technological knowledge and a positive growth in R&D inputs is required to maintain sustained growth in TFP that have been motivated by graphical evidence of a decline in R&D productivity in the USA [23]. Schumpeterian theories of endogenous growth have, to some extent, also been motivated by diminishing returns to R&D by assuming that innovations are spread over a larger variety of products and, therefore, that there is a tendency for decreasing returns to R&D [26]. Ha and Howitt [56] argue that long-run trends in R&D and TFP are more supportive of fully endogenous Schumpeterian growth theory than they are of semi-endogenous growth theory. The distinctive prediction of semi-endogenous theory that sustained TFP growth requires sustained growth of R&D input is not supported by co-integration tests and forecasting exercises, as TFP growth has been stationary even though the growth rate of R&D input has fallen three-fold since the early 1950s in the USA. In contrast, the prediction of Schumpeterian theory that sustained TFP growth requires a sustained fraction of GDP to be spent on R&D, is not contradicted by similar tests. In addition they state that Schumpeterian theory of endogenous growth is more consistent with long-run trends in R&D and TFP than semi-endogenous theory. Zachariadis [30] and [31] examines the relationship between TFP growth and the share of R&D expenditure in total income and finds support for the Schumpeterian growth models. Madsen [57] shows that the hypothesis of constant returns to R&D cannot be rejected for 21 industrialized countries and, therefore, challenge the conventional wisdom of diminishing returns to R&D or that R&D is diluted due to an increasing variety of products as the economy grows. The statistical results were supported by graphical evidence which showed that diminishing returns to R&D have been limited to some countries and certain period in history, particularly the 1960s. The results imply that the assumptions underlying semi-endogenous growth theories cannot be maintained and that Schumpeterian theories have to relax the assumption that R&D is spread over an increasing range of goods as the economy is growing to be consistent with the empirical evidence. This research shows diminishing returns to R&D investments, in addition a main finding is that to increase productivity growth and economic performance of countries in the long run, policy makers should focus their decisions on the total amount of R&D investments and their inner structure respectively. In fact, the highest relative productivity growth is reached in countries with GERD close to the range 2.3–2.61 per cent of GDP. In achieving these aims the policy makers have to ensure better coordination of policy and recognise the complex chain of causation that can be triggered by polling on R&D investment. Moreover, the magnitude of GERD within this range should be formed by [58]: over 60 per cent has to be by business enterprises, whereas about 30 per cent by government. For instance the USA has an arithmetic mean of GERD/GDP equal to about 2.6 per cent over 1995–2005 period, which is split in: 1.9 per cent financed by business enterprises, 0.3 per cent by government, 0.4 per cent by other sectors [35]. The optimal range of R&D investment between 2.3 and 2.61 per cent that maximizes the productivity growth in the long run is based on a set of open economies operating in the same geo–socio–economic and politic area. It is important to always consider socio–economic specificity of each country. Each country has a specificity represented by his macroeconomic structure such as public debt, inflation, real GDP growth, geo–political situation, etc. such that, given a fixed level of R&D investment, this may generate different effects and economic performances for several countries. The USA are technological leader and R&D contribution to productivity growth is largely due to innovation [1], whereas, for instance, Germany and France have almost the same level of GERD/GDP but the productivity growth of France is higher than Germany, which is due to problems of reunification of the east part. In other words the same amount of GERD/GDP ratio generates effects that can change over time and space. In fact, at international level, converging strategies are adopted in relation to science and technology policies [59] and [60] to boost productivity and economic growth. Despite these converging initiatives, countries have diverging results in terms of economic performance and productivity growth [38], because of differences in R&D investment, heterogeneous economic–financial situation and other socio–political–economic factors. The governments realize that it is critical to be aware of the relative importance of different factors that might influence productivity growth. However, it is equally important for researchers to help government more acutely aware that the ultimate impact of any increase in spending on R&D depends critically upon complex, interwoven strings of causations which are not necessarily constant over time and across countries, because of countries' economic specificity and turbulence of markets. In short, ceteris paribus, research evidence suggests that the underlying political economy of growth that should be adopted to boost productivity gains in the long run and therefore competitive advantage of open nations, under stability of socio–economic–financial systems and low public debt, seems simple at first glance: raising the long run R&D investment as percentage of the GDP in the range of 2.3 to 2.61 per cent and considering that RGLP = f(GERD/GDP ratio) is a function concave downwards. The future challenge for policy makers is how to ensure that such research policy implications are integrated in national political economy, considering country's economic structure, to maximize the positive long run impact on productivity and economic growth