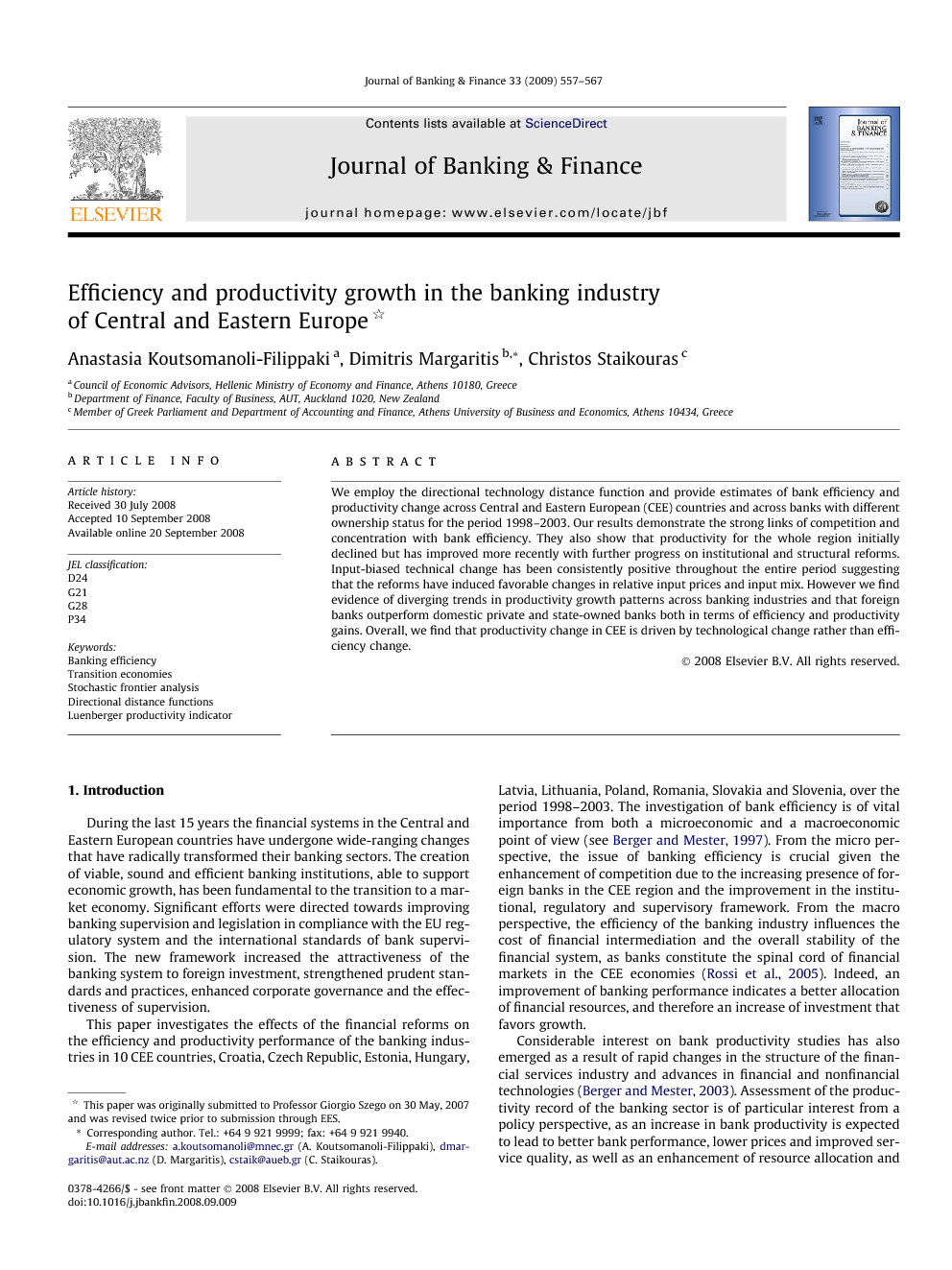 We employ the directional technology distance function and provide estimates of bank efficiency and productivity change across Central and Eastern European (CEE) countries and across banks with different ownership status for the period 1998–2003. Our results demonstrate the strong links of competition and concentration with bank efficiency. They also show that productivity for the whole region initially declined but has improved more recently with further progress on institutional and structural reforms. Input-biased technical change has been consistently positive throughout the entire period suggesting that the reforms have induced favorable changes in relative input prices and input mix. However we find evidence of diverging trends in productivity growth patterns across banking industries and that foreign banks outperform domestic private and state-owned banks both in terms of efficiency and productivity gains. Overall, we find that productivity change in CEE is driven by technological change rather than efficiency change.

During the last 15 years the financial systems in the Central and Eastern European countries have undergone wide-ranging changes that have radically transformed their banking sectors. The creation of viable, sound and efficient banking institutions, able to support economic growth, has been fundamental to the transition to a market economy. Significant efforts were directed towards improving banking supervision and legislation in compliance with the EU regulatory system and the international standards of bank supervision. The new framework increased the attractiveness of the banking system to foreign investment, strengthened prudent standards and practices, enhanced corporate governance and the effectiveness of supervision. This paper investigates the effects of the financial reforms on the efficiency and productivity performance of the banking industries in 10 CEE countries, Croatia, Czech Republic, Estonia, Hungary, Latvia, Lithuania, Poland, Romania, Slovakia and Slovenia, over the period 1998–2003. The investigation of bank efficiency is of vital importance from both a microeconomic and a macroeconomic point of view (see Berger and Mester, 1997). From the micro perspective, the issue of banking efficiency is crucial given the enhancement of competition due to the increasing presence of foreign banks in the CEE region and the improvement in the institutional, regulatory and supervisory framework. From the macro perspective, the efficiency of the banking industry influences the cost of financial intermediation and the overall stability of the financial system, as banks constitute the spinal cord of financial markets in the CEE economies (Rossi et al., 2005). Indeed, an improvement of banking performance indicates a better allocation of financial resources, and therefore an increase of investment that favors growth. Considerable interest on bank productivity studies has also emerged as a result of rapid changes in the structure of the financial services industry and advances in financial and nonfinancial technologies (Berger and Mester, 2003). Assessment of the productivity record of the banking sector is of particular interest from a policy perspective, as an increase in bank productivity is expected to lead to better bank performance, lower prices and improved service quality, as well as an enhancement of resource allocation and productivity in the broader economy. Productivity growth also contributes to greater safety and soundness of the banking system provided these gains are channelled towards strengthening capital buffers that absorb risk (Casu et al., 2004). Moreover, an analysis of productivity differences across countries may help identify potential successes or failures of policy initiatives. Most banking studies have estimated productivity change by employing either non-parametric or parametric techniques rather than using index number methods (see the literature reviews in Berger and Humphrey, 1997 and Berger and Mester, 2003). Several studies have computed the Malmquist total factor productivity index by employing non-parametric Data Envelopment Analysis (DEA) techniques to estimate Shephard (1970) type distance functions (see for example, Grifell-Tatje and Lovell, 1997 and Chaffai et al., 2001). Parametric estimation of distance functions has become more prevalent in recent years (see for example, Fuentes et al., 2001 and Cuesta and Orea, 2002). A comparison of non-parametric and parametric approaches for measuring productivity change in banking is given in Casu et al. (2004). Research on cross-country efficiency performance comparisons in transition countries has intensified recently. Particular attention has been given to the analysis of the effect of ownership on performance in light of the increasing presence of foreign investors in the financial systems of transition economies. Thus, several studies have examined cost and/or profit efficiency of banks, especially in CEE countries, focusing primarily on the performance differences between foreign and domestic financial institutions (see, for example, Grigorian and Manole, 2002, Bonin et al., 2005, Fries and Taci, 2005, Rossi et al., 2005 and Yildirim and Philippatos, 2007a). This paper fills a gap in the literature by departing from the traditional analysis of efficiency and productivity performance. We use directional technology distance functions, a generalization of the widely used partially oriented Shephard (1970) distance functions, to model multiple output technology in the CEE banking sector. For our purposes directional distance functions are extremely useful tools because of their aggregation properties in addition to being natural performance or efficiency measures themselves (see Färe et al., 2007). They entail an extremely flexible description of technology without restricting banks to optimize in a single (i.e., input or output) direction as is the case with the Shephard distance functions. Following Chambers et al. (1998) we parameterize the directional distance function via a quadratic function specified in the form of a stochastic frontier model.1 We use the directional distance function, to measure efficiency and estimate productivity using the Luenberger productivity indicator.2 The additive structure of the Luenberger indicator facilitates the aggregation of individual bank efficiency and productivity to the industry level (see Färe and Primont, 2003).3 By decomposing productivity growth into technological change (both neutral and biased) and efficiency change, we can directly identify the distinct contributions of innovation and learning and diffusion to productivity performance. These tools are particularly useful for analyzing the performance of the banking system during a transitional phase.4 We use this methodology to address a number of questions regarding banking efficiency and productivity in CEE countries and to discuss their policy implications. Are bank choices of inputs and outputs consistent with technical efficiency? Are there any performance differences across CEE countries? Has the process of consolidation improved efficiency? How has productivity evolved over time for the whole region and across banking markets? How much productivity growth is attributed to efficiency change or technological change? Does ownership structure matter for productivity growth? The rest of the paper is organized as follows. Section 2 presents a brief history of the reforms implemented in the CEE countries. Section 3 describes the methodology, while Section 4 provides the description of the data. Section 5 discusses the empirical results, while conclusions are drawn in Section 6.

This paper investigates the efficiency and productivity growth of the banking industry in 10 CEE countries using a stochastic directional technology distance function approach over the period 1998–2003. During this lead up to accession to the EU period, an extensive, albeit at varying degrees of intensity, process of financial system reform took place which increased competitive pressures and emphasized efficiency and productivity issues. Our results indicate a significant level of inefficiency for the whole CEE region, with considerable variation across countries. This finding suggests that if CEE banks are to respond to new challenges associated with increasing European integration and if they are to survive in a highly competitive environment, they will need to further improve their performance. Aside from Estonia no other CEE country has made significant efficiency gains. It is important for policy makers and bank managers to think about why inefficiencies have persistent despite progress with financial deregulation. Consistent with previous research, our findings suggest that market concentration has not hampered efficiency in the CEE banking markets. But even if efficiency has not improved our results show that productivity gains have been made. We find that while there was initially a decline in productivity for most CEE countries, this trend was reversed after 2000, when in anticipation of the EU accession and as a result of the completion of reforms in most countries, productivity increased. These productivity gains are due to technological progress, rather than to an improvement in efficiency. This evidence suggests that domestic banks have benefited from technological spillovers brought about by their foreign competitors and that the entry of foreign investors led to better financial and operational technology (effect on technology) which outweighed improvements or lack thereof in managerial practices (effect on efficiency). We also find that input biased technological change has been consistently positive throughout the entire sample period suggesting that the reforms have induced favorable changes in relative input prices and input mix. The estimated values of the productivity indicator for each country reveal different patterns in productivity performance across banking industries. While Romania and Slovakia exhibit a clear downward trend in productivity over the sample period, the opposite holds for Estonia, Poland and Croatia. These diverging trends across the banking markets may reflect the different approaches that have been followed through the years and across countries in terms of the timing and the implementation of banking reforms. There is, however, evidence that most countries show a clear improvement in their productivity during the period 2002 and 2003. We find that there is an effect of ownership on bank performance. Banks with a foreign strategic investor appear to have achieved the highest productivity gains among all types of credit institutions. At the start of the sample period, foreign banks appear to have been disadvantaged by the new economic environment, by language and cultural differences and by organizational diseconomies due to operating or monitoring from a distance (evident by their negative technological and efficiency change record in 1998–2000). However, significant technological progress is observed after 2000, resulting in overall productivity gains, which in conjunction with further progress on regulatory reforms helped to achieve efficiency gains (evident from the positive efficiency change record for the period 2002 and 2003). We also find that all types of banking institutions are likely to have benefited from technological spillovers brought about by their foreign competitors. This is indicated by the positive record of technological change for domestic banks and for state-owned banks after 2001. Overall, policy makers in CEE countries can draw some lessons from the conclusions of the study to promote efficiency and productivity by enhancing their efforts to reform the financial services regulatory and supervisory framework and to complete the restructuring process.