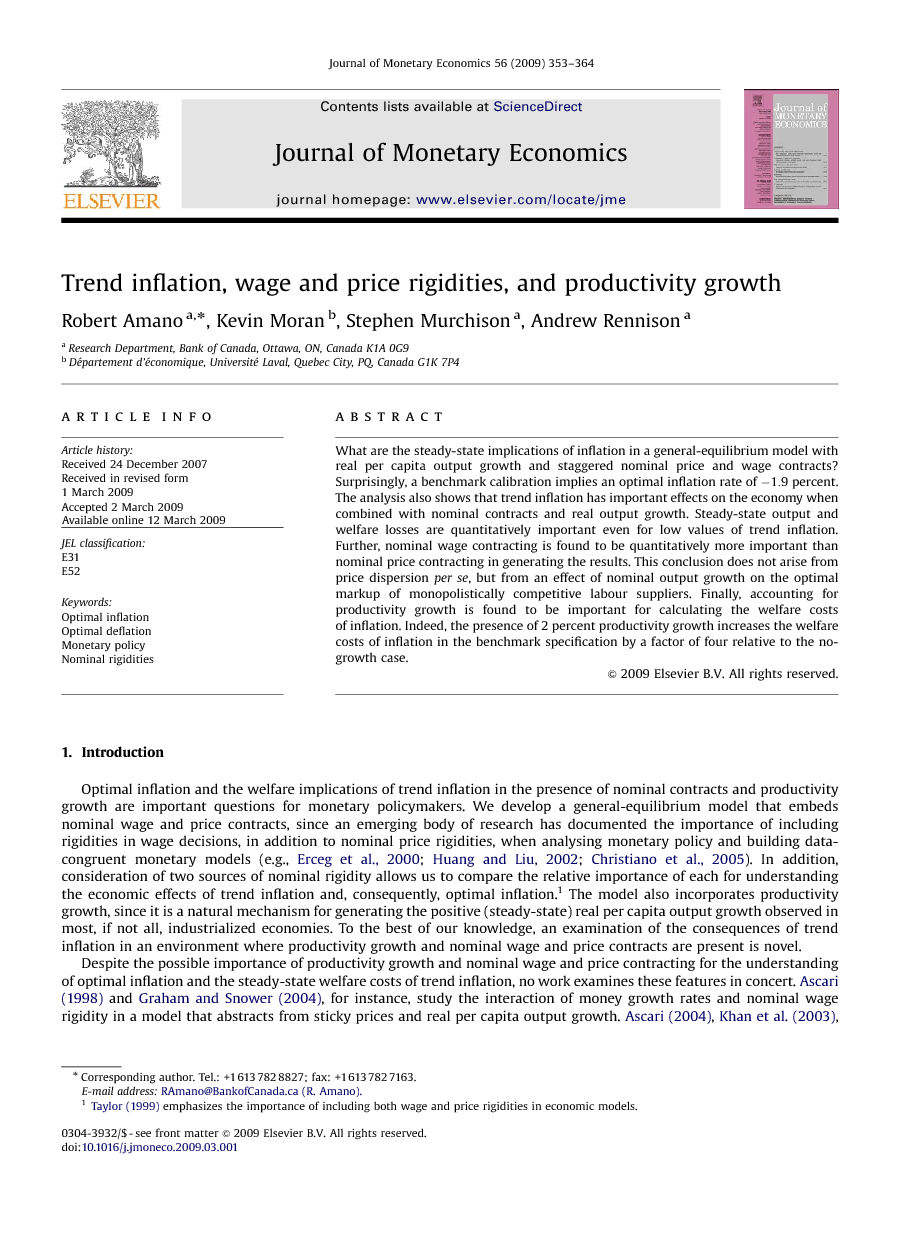 What are the steady-state implications of inflation in a general-equilibrium model with real per capita output growth and staggered nominal price and wage contracts? Surprisingly, a benchmark calibration implies an optimal inflation rate of -1.9-1.9 percent. The analysis also shows that trend inflation has important effects on the economy when combined with nominal contracts and real output growth. Steady-state output and welfare losses are quantitatively important even for low values of trend inflation. Further, nominal wage contracting is found to be quantitatively more important than nominal price contracting in generating the results. This conclusion does not arise from price dispersion per se, but from an effect of nominal output growth on the optimal markup of monopolistically competitive labour suppliers. Finally, accounting for productivity growth is found to be important for calculating the welfare costs of inflation. Indeed, the presence of 22 percent productivity growth increases the welfare costs of inflation in the benchmark specification by a factor of four relative to the no-growth case.

Optimal inflation and the welfare implications of trend inflation in the presence of nominal contracts and productivity growth are important questions for monetary policymakers. We develop a general-equilibrium model that embeds nominal wage and price contracts, since an emerging body of research has documented the importance of including rigidities in wage decisions, in addition to nominal price rigidities, when analysing monetary policy and building data-congruent monetary models (e.g., Erceg et al., 2000; Huang and Liu, 2002; Christiano et al., 2005). In addition, consideration of two sources of nominal rigidity allows us to compare the relative importance of each for understanding the economic effects of trend inflation and, consequently, optimal inflation.1 The model also incorporates productivity growth, since it is a natural mechanism for generating the positive (steady-state) real per capita output growth observed in most, if not all, industrialized economies. To the best of our knowledge, an examination of the consequences of trend inflation in an environment where productivity growth and nominal wage and price contracts are present is novel. Despite the possible importance of productivity growth and nominal wage and price contracting for the understanding of optimal inflation and the steady-state welfare costs of trend inflation, no work examines these features in concert. Ascari (1998) and Graham and Snower (2004), for instance, study the interaction of money growth rates and nominal wage rigidity in a model that abstracts from sticky prices and real per capita output growth. Ascari (2004), Khan et al. (2003), King and Wolman (1996), Levin et al. (2007), Levin and Yun (2007), and Woodford (2003) examine, among other things, the steady-state costs of trend inflation in general-equilibrium models that do not include real output growth or nominal wage rigidities. These papers find a range of values for optimal inflation depending on the economic features under consideration. Models with only nominal price contracts tend to admit an optimal steady-state rate of inflation of approximately zero since this value minimizes the deadweight loss from relative price dispersion (e.g., Woodford, 2003). In models with both nominal price rigidities and a role for money, the optimal inflation rate balances the costs associated with nominalprice rigidity in imperfectly competitive markets with those arising from holding money. Khan et al. (2003) find that optimal monetary policy in such an environment calls for deflation between 0.8 and 2.3 percent, depending on the parameter estimates of their money demand function. Owing to the presence of nominal price contracts (and the resulting relative price dispersion), however, Khan et al. do not find it optimal to set the nominal interest rate to zero. Levin et al. (2007) also consider a model with nominal price rigidities and money, but augment their analysis with two strategic complementarities (quasi-kinked demand and firm-specific capital). In their benchmark model without strategic complementarities, they find optimal inflation to be approximately -2.5-2.5 percent. However, when strategic complementarities are introduced and allowed to grow in magnitude, they drive optimal inflation toward zero, since relative price and average markup distortions become more significant at the Friedman rule, compared with the welfare costs of money demand distortion at zero trend inflation. Wolman (2005) studies the determinants of optimal inflation in a two-good sticky-price model that encompasses relative productivity growth. In his model, Wolman finds slight deflation (0.4 percent) to be optimal, despite the absence of a demand for money technology. Given the benchmark calibration, the optimal rate of inflation is found to be -1.9-1.9 percent. Thus, the results suggest an optimal deflation prescription without a transaction role for money. Consistent with the standard Friedman-rule prescription, the results call for deflation to offset another (non-monetary) feature of the economy: the inability of nominal wages to adjust freely in the presence of productivity growth. More specifically, higher trend inflation and productivity growth significantly increase the average markup of wage setters, exacerbating monopolistic distortions in the labour market. This important effect does not arise from wage dispersion per se, but from an effect of nominal growth on the optimal markup of monopolistically competitive labour suppliers resulting from an asymmetry inherent in the utility function of the households. The output and welfare costs of trend inflation are also computed by comparing the steady state of the model under a given rate of inflation to the one that would occur under the optimal rate. Notably, the welfare costs of inflation in a growing economy are found to be significant even at low rates of inflation. The paper is organized as follows. Section 2 develops the model used in the simulations. The model's steady state is described in Section 3. Section 4 describes the calibration of the model. The results are discussed in Section 5. Section 6 offers concluding remarks.

Our work studied the implications of trend inflation in the presence of nominal price and wage contracts and real per capita output growth. To this end, a general-equilibrium environment based on Erceg et al. (2000), modified to account for the possible effects of non-zero trend inflation and real per capita output growth was developed. The results suggest that trend inflation has an important implication that arises not from price dispersion per se, but from an effect on the optimal markup of monopolistically competitive labour suppliers. In particular, the inherent asymmetry in the utility function around the optimum—utility declines faster with a markup below the optimum than with a markup above the optimum—leads households to choose a higher average wage markup over the marginal rate of substitution. This higher markup is equivalent to increasing the monopoly distortion that is already present in the model owing to imperfect competition. In a sense, the same type of asymmetry in pricing behaviour described in Bénabou and Konieczny (1994) and Devereux and Siu (2007) is found to be even more important in the labour market. Given the model, its implications for the welfare costs of inflation were studied. The calculations suggest that, in an environment with productivity growth, steady-state inflation at relatively modest annual rates of 22 percent or 44 percent has significant effects on the economy. Indeed, a 2 percent rate of productivity growth leads, in the model, to welfare costs of inflation that are four times as important as those in the zero growth case. Our analysis suggests that at least two issues merit further investigation. First, our results are based on the inherent features of a model that abstracts from strategic complementarity in price setting; by relaxing this assumption, subsequent research can study the implications of factor specificity for the steady-state welfare effects of trend inflation.13 Second, the welfare costs of inflation are likely to be sensitive to assumptions regarding the structure of the labour market. We have taken the approach used by Christiano et al. (2005) and Erceg et al. (2000), among others, and the modelled labour market as allocative. Allowing for richer non-allocative markets may change the welfare costs of trend inflation that arise from labour market frictions.