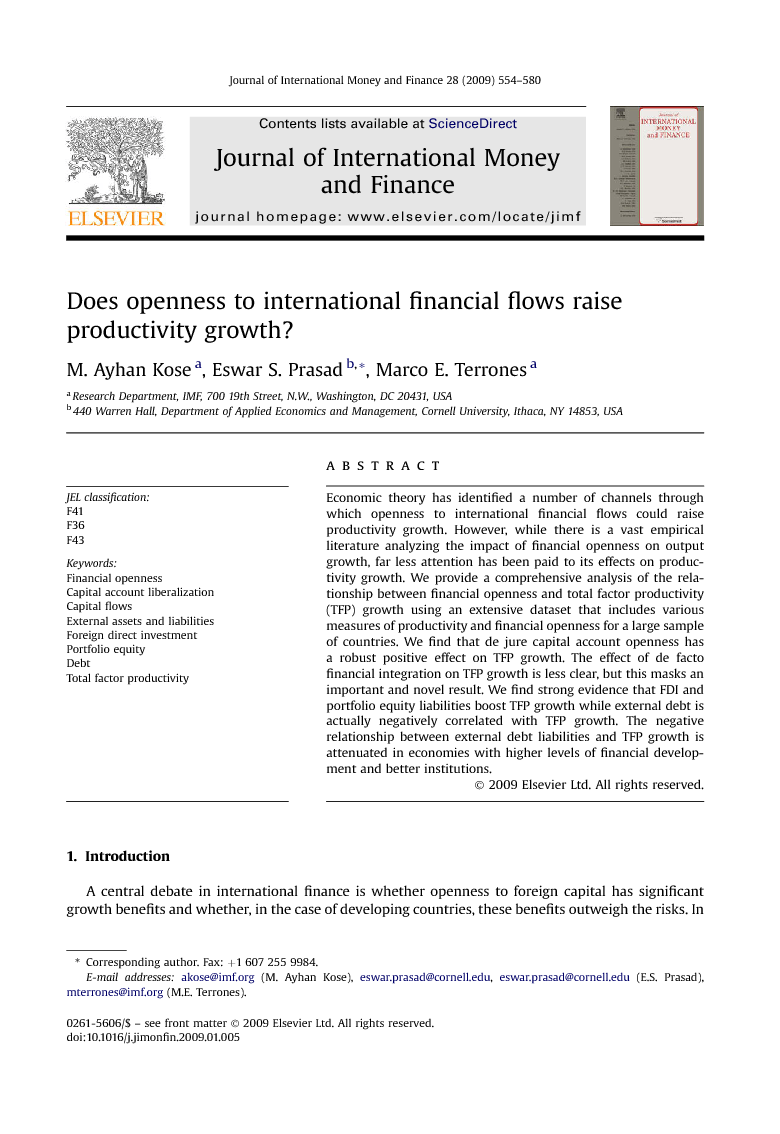 Economic theory has identified a number of channels through which openness to international financial flows could raise productivity growth. However, while there is a vast empirical literature analyzing the impact of financial openness on output growth, far less attention has been paid to its effects on productivity growth. We provide a comprehensive analysis of the relationship between financial openness and total factor productivity (TFP) growth using an extensive dataset that includes various measures of productivity and financial openness for a large sample of countries. We find that de jure capital account openness has a robust positive effect on TFP growth. The effect of de facto financial integration on TFP growth is less clear, but this masks an important and novel result. We find strong evidence that FDI and portfolio equity liabilities boost TFP growth while external debt is actually negatively correlated with TFP growth. The negative relationship between external debt liabilities and TFP growth is attenuated in economies with higher levels of financial development and better institutions.

In this paper, we have provided a comprehensive empirical analysis of the relationship between financial openness and TFP growth. We find strong evidence that financial openness, as measured by de jure capital account openness, is associated with higher medium-term TFP growth. These results are robust to our attempts to deal with potential problems of endogeneity and reverse causality, leading us to the view that this may in fact be a causal relationship. But it is a subtle one. The level of de facto financial integration, as measured by the stock of external liabilities to GDP, is not correlated with TFP growth. But splitting up the stock of external liabilities reveals a novel and interesting result. FDI and equity inflows (cumulated over decade-long periods) contribute to TFP growth while debt inflows have the opposite effect. The negative effect of stocks of external debt liabilities on TFP is partially attenuated in economies with better-developed financial markets and better institutional quality. Why does financial openness—when measured by capital account openness or the stock of FDI and portfolio equity liabilities—have a significant positive effect on TFP growth, while the existing literature suggests that the effect of financial openness on output growth is not at all robust? (Obstfeld, 2008, highlights this conundrum). There are several possible reasons for this finding. First, the timing of the adjustment of TFP and output to greater financial integration may be different. TFP growth is often associated with the introduction of new technologies. If these are general-purpose technologies simultaneously affecting a number of sectors, they could result in an increase in the rate of obsolescence of both physical and human capital. This could potentially slow down the growth rate of output in the short run, offsetting the growth-enhancing effects of TFP (Aghion and Howitt, 1998). Second, financial openness might influence the reallocation of outputs and inputs across individual producers. By affecting the return to capital, financial openness could lead to changes in the entry and exit decisions of firms/plants. To the extent that this does not have a negative effect on net entry, aggregate factor productivity will increase because new plants are more productive than exiting plants.21 This reallocation from less productive to more productive plants would ultimately increase total factor productivity with no significant gains in employment. These productivity gains would increase over longer horizons since there could be additional gains from both learning and selection effects over longer periods. Third, there could be some adjustment costs that delay the realization of the positive effects of TFP on output growth in developing countries. As the adjustment of the capital stock to new technologies is completed, these effects are expected to disappear making the impact of financial openness on economic growth in the long run more visible. In light of the short history of the recent wave of financial globalization, which began in earnest only in the mid-1980s, perhaps it is easier to detect its positive effects on TFP growth than on output growth. The results in this paper point to a large and unfinished research agenda. One issue is to delineate more clearly the specific channels through which financial openness boosts productivity growth—these could include technological spillovers, higher efficiency due to increased competition, and improved corporate governance. A second issue is to investigate in more depth why de jure capital account openness delivers TFP growth benefits while de facto openness fails to do so. We have suggested some possible explanations but this issue remains to be conclusively resolved, especially since de facto openness seems to be more closely tied to GDP growth benefits than de jure openness. Another important issue is to understand better why some economies seem to attain larger productivity gains from financial openness. Our results suggest that this depends on the nature of financial flows and also on domestic financial and institutional development. Interestingly, even when we control for these domestic variables, the level of financial integration itself seems to make a difference – economies with higher levels of integration have higher marginal benefits from additional integration. There seem to be a variety of complex interactions among international financial integration and domestic financial sector development. Pursuing this issue in detail is beyond the scope of this paper and we leave it for future work. In summary, our analysis using macroeconomic data bolsters the microeconomic evidence (based on firm- or industry-level data) that financial integration, especially if it takes the form of FDI or portfolio equity flows, leads to significant gains in efficiency and TFP growth. Moreover, in tandem with the recent literature showing that TFP growth rather than factor accumulation is the key driver of long-term growth, our results suggest that—despite all the skepticism surrounding it and despite all of the potential costs and risks associated with it—capital account liberalization deserves another careful look.