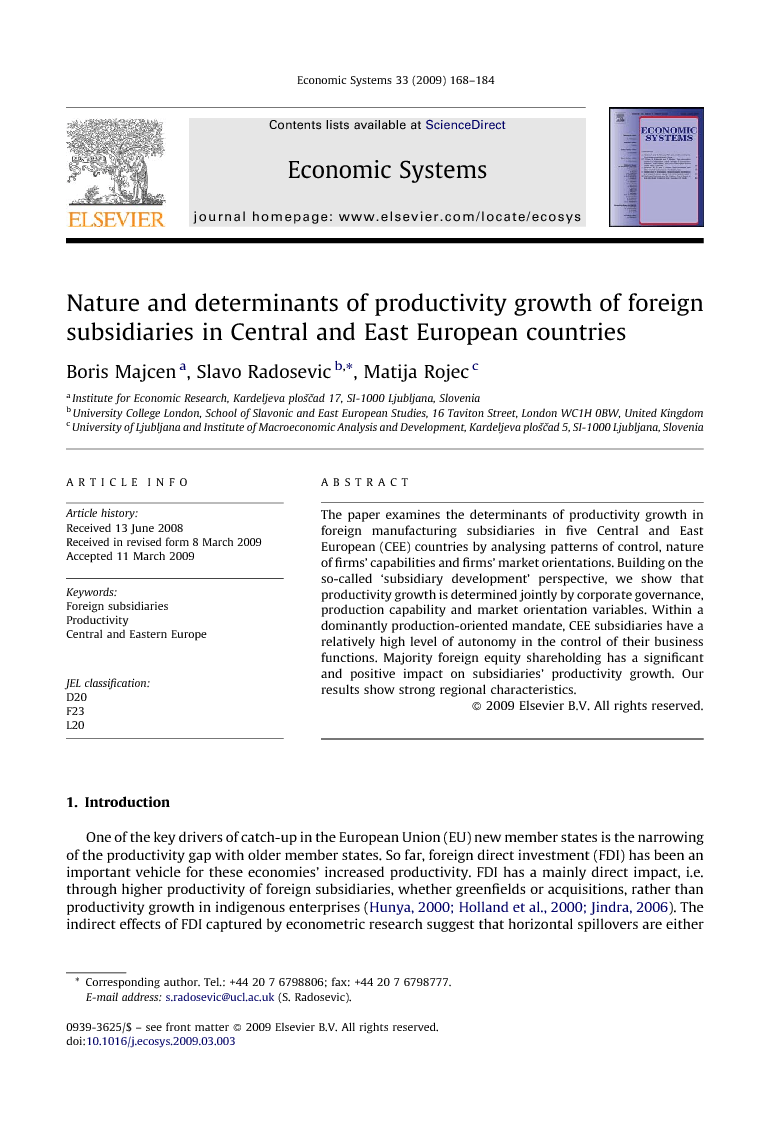 The paper examines the determinants of productivity growth in foreign manufacturing subsidiaries in five Central and East European (CEE) countries by analysing patterns of control, nature of firms’ capabilities and firms’ market orientations. Building on the so-called ‘subsidiary development’ perspective, we show that productivity growth is determined jointly by corporate governance, production capability and market orientation variables. Within a dominantly production-oriented mandate, CEE subsidiaries have a relatively high level of autonomy in the control of their business functions. Majority foreign equity shareholding has a significant and positive impact on subsidiaries’ productivity growth. Our results show strong regional characteristics.

One of the key drivers of catch-up in the European Union (EU) new member states is the narrowing of the productivity gap with older member states. So far, foreign direct investment (FDI) has been an important vehicle for these economies’ increased productivity. FDI has a mainly direct impact, i.e. through higher productivity of foreign subsidiaries, whether greenfields or acquisitions, rather than productivity growth in indigenous enterprises (Hunya, 2000, Holland et al., 2000 and Jindra, 2006). The indirect effects of FDI captured by econometric research suggest that horizontal spillovers are either absent or negative (Damijan et al., 2003, Konings, 2001, Jensen, 2002 and Gorg and Greenaway, 2002), but that there are vertical spillovers (Damijan et al., 2003 and Smarzynska Javorcik, 2004), although more evidence is needed on this latter aspect. The economic perspective has advanced our understanding of the effects and role of FDI in Central and East European (CEE) economies. However, research on spillovers suffers from definitional problems, i.e. what is being measured, and from poor proxies (Harris and Robinson, 2004). We also know little about the micro-mechanisms through which FDI exerts its influence in these economies. To advance our understanding of the micro-elements of FDI requires new concepts and new types of data (Meyer, 2003). In this paper, we try to address some of these deficiencies by examining the micro-level, based on a large-scale survey of FDI subsidiaries in CEE economies. We explore the factors explaining productivity changes in foreign subsidiaries, in the manufacturing sectors of five CEE economies (Estonia, Hungary, Poland, Slovakia and Slovenia). Specifically, we try to answer the following questions. What are the factors that determine productivity growth in foreign subsidiaries? What types of subsidiaries in terms of competencies are present in CEE countries? What is the level of strategic, marketing and operational control of foreign parent companies? How do competence and control issues affect the productivity growth of subsidiaries? Our investigation should complement existing economic perspectives and help to explain the rather inconclusive evidence from national level studies. In conceptual terms, we build on the ‘subsidiary development’ perspective to examine productivity growth in FDI subsidiaries (Birkinshaw and Hood, 1998, Birkinshaw et al., 1998 and Birkinshaw, 2001; for a review of this literature see Paterson and Brock, 2002 and Birkinshaw, 2003). The idea underlying this stream of research is that multi-national corporations (MNCs), as the vehicles of FDI, have become ‘differentiated networks of subsidiaries’ (Bartlett and Ghoshal, 1989). This has enabled subsidiaries to develop resources and capabilities, and to grow either autonomously or through different degrees of integration with their headquarters. In the context of CEE this perspective could shed light on aspects of FDI that remain obscure when analysed from a spillovers perspective. In addition, this type of empirical research should contribute to the emerging literature that bridges between international business and growth theories (Ozawa and Castello, 2001). This paper reports the results of a study based on a questionnaire survey of 433 foreign subsidiaries in the manufacturing sectors of five CEE countries. Section 2 of this paper briefly reviews the relevant literature and outlines our conceptual approach. Section 3 describes the sample. Section 4 presents a descriptive analysis. Sections 5 and 6, respectively, describe the econometric model used to explore the determinants of productivity growth in foreign subsidiaries, and interpret the results. The conclusions are presented in Section 7.