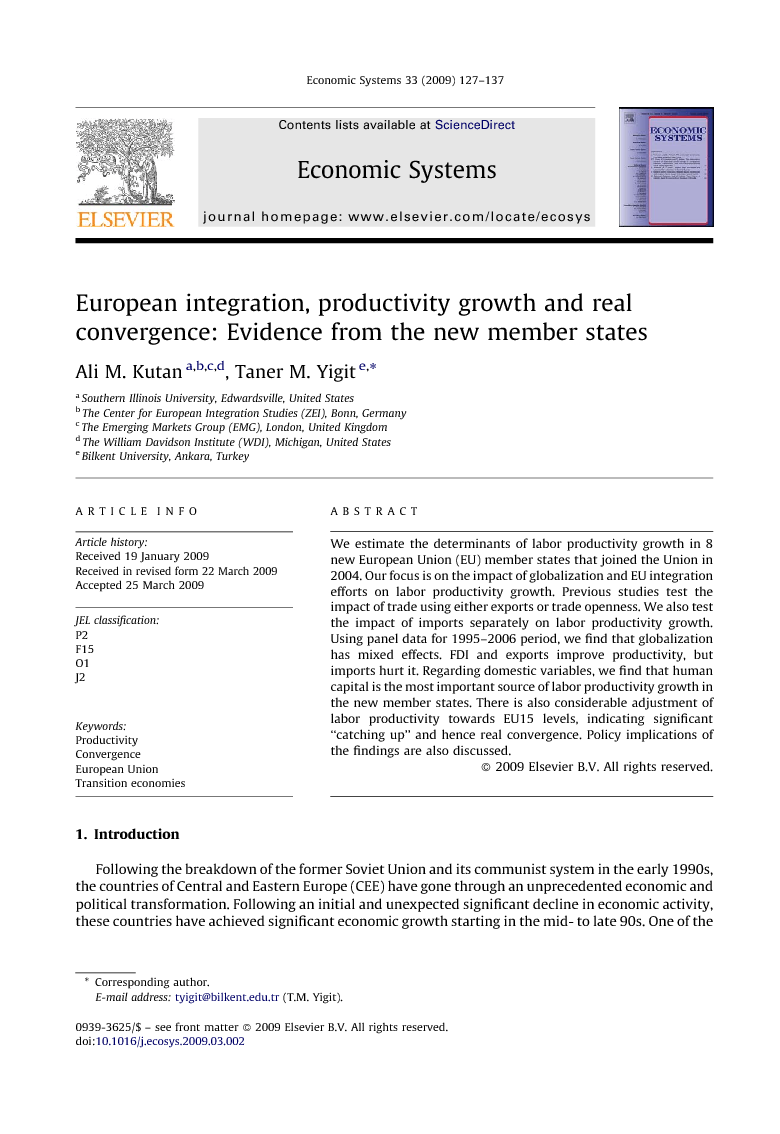 Following the breakdown of the former Soviet Union and its communist system in the early 1990s, the countries of Central and Eastern Europe (CEE) have gone through an unprecedented economic and political transformation. Following an initial and unexpected significant decline in economic activity, these countries have achieved significant economic growth starting in the mid- to late 90s. One of the interesting features of this growth pattern has been the significant increase in labor productivity. According to the World Bank, during 1999–2004, the growth in labor productivity raised income per capita in CEE countries more than that in employment and population (World Bank Report, 2008). At the same time period, CEE labor productivity has grown at a rate greater than many other emerging and developing countries, including Russia and Ukraine (Rada and Taylor, 2006). In this paper, we study two related issues for 8 CEE countries that joined the European Union (EU) in 2004, namely: the Czech Republic, Estonia, Hungary, Poland, Latvia, Lithuania, Slovakia and Slovenia. We will refer to these countries as the CEE8 in the rest of the paper. First, we investigate the determinants of labor productivity growth. Second, we test whether there have been some advances in labor productivity level towards that of core EU (i.e., EU15). Given the significant growth in their labor productivity, it is important for policymakers and other stakeholders to understand what factors have driven such growth. As the eventual goal of integration is the increase in standards of living to EU levels, further improvements in labor productivity play an instrumental role in satisfying such an economic (also historical and political) objective. This will facilitate the catching up (or real convergence) of CEE8 countries to the income levels of the core EU members. Evidence on such real convergence has important implications for the design of an optimal policy towards the entire euro zone. Within the new and candidate countries, significant progress toward per capita income convergence is seen as key in securing the political assent of the population to both transition and membership in the EU. For the EU countries, such income growth is important if excessive population movements from the new members to the old are to be avoided and if the EU's budget is not to be strained by transfers to lagging economies. In other words, real convergence has significant fiscal and monetary policy implications (Kutan and Yigit, 2007). In a broader sense, the main objective of this paper is to better understand the implications of integration and globalization on labor productivity. We also account for the impact of domestic variables, namely, human capital, research development expenditures and domestic investment, which are all closely related to domestic policy-making. Given our objective, we believe that examining the case of CEE8 countries provides a unique study, as the integration efforts have been associated with significant internationalization activities as well. As former communist economies, they not only had to integrate their economies quickly with the West to survive the hardship of the former economic system, but also assumed the task of reaching the EU standards. The experience of these new EU members may provide important lessons for the candidate countries as well as other emerging economies. Another important feature of our paper is that we test the individual effects of exports and imports on labor productivity separately. Recent literature has mainly focused on exports (Melitz, 2003 and de Loecker, 2007) and FDI (Borensztein et al., 1998; Xu, 2000 and Javorcik, 2004) to explain productivity changes. There are only a few available studies that investigate the direct impact of imports on productivity and the cross-country evidence on the issue is mixed (Blalock and Veloso, 2007 and Kasahara and Rodrique, 2008). To our best knowledge, there is no aggregate country-level evidence regarding the import-labor productivity link for CEE8 countries.1 In the next section, we explain our theoretical framework. Section 3 further motivates the study by discussing the evolution of potential factors that might have affected the labor productivity growth in CEE8 countries. We also refer to some related studies that examine the determinants of labor productivity. In Section 3, we describe the data and discuss the estimation and the findings. The last section concludes with policy implications of the findings.

We have examined the role of innovation and the rate of technology transfer in explaining productivity at the industry level in eight Central and Eastern European countries that joined the Union since 2004. Innovation variables are divided into global (FDI, exports and imports) and domestic (education, R&D and investment) factors to determine whether globalization and integration factors have contributed to labor productivity more than domestic ones. Technology transfer rate is shown to be related to the distance in productivity levels between individual CEE8 countries and EU15 and is also used as a proxy for convergence in technical efficiency. Regarding international innovation variables, we have found that all factors play a significant role in explaining labor productivity. However, FDI and exports are found to increase productivity growth, while imports reduce it. Given scant studies on the impact of imports on productivity and mixed available empirical evidence, our findings may shed some light on this highly debatable issue now. Our evidence is at the aggregate level and some policy can be deduced from aggregate impacts, but further research at the micro level is certainly necessary to better understand the imports-productivity link in CEE8 countries to help policymakers design policies accordingly. Regarding domestic innovation variables, we found that education and investment variables are significant and positive, while R&D is not. CEE8 countries have a highly educated and skilled labor force and our results show that this factor has been instrumental in improving productivity. Relatively small amount of R&D expenditures (about 1–2 percent of GDP) in CEE8 countries may explain why this variable does not contribute much to labor productivity. With respect to technological transfer, the evidence indicates a positive and statistically significant impact of distance from technological frontier on productivity growth, indicating significant technology transfer facilitating “catching up” by CEE8 countries towards EU15 productivity. However, our international and domestic variables do not seem to help facilitate this technology transfer. We attribute this unintuitive result to the relatively small number of observations we have. Overall, our results suggest that globalization and integration factors affect labor productivity growth directly through rates of innovation, if not indirectly through distance from the technological frontier or technology transfer. An important policy implication of the results is that further policy attempts geared towards designing innovation-encouraging policies would have significant payoffs. Research at the micro level on the potential sources of the effects of imports on productivity would be useful. Our finding that variables typically used as determinants of productivity (such as R&D, international trade, FDI) may not facilitate technology transfer suggests that there may be some informal channels present, such as the role of informal economy. Further research using longer samples and including more formal and some informal indicators of technological transfers from the frontier is necessary to generalize the findings of this study. We hope that our results provide some yardstick which can be used for comparison purposes.