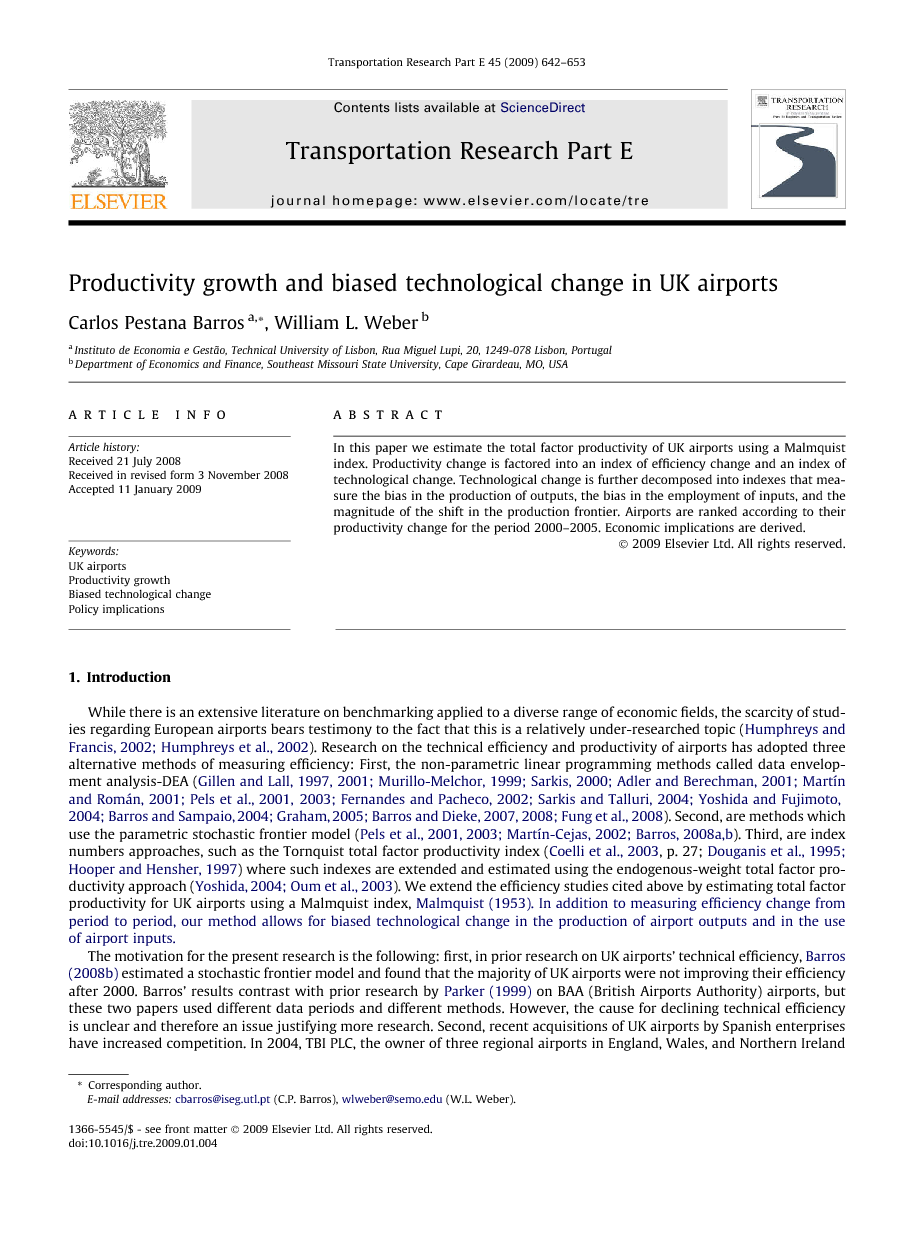 In this paper we estimate the total factor productivity of UK airports using a Malmquist index. Productivity change is factored into an index of efficiency change and an index of technological change. Technological change is further decomposed into indexes that measure the bias in the production of outputs, the bias in the employment of inputs, and the magnitude of the shift in the production frontier. Airports are ranked according to their productivity change for the period 2000–2005. Economic implications are derived.

While there is an extensive literature on benchmarking applied to a diverse range of economic fields, the scarcity of studies regarding European airports bears testimony to the fact that this is a relatively under-researched topic (Humphreys and Francis, 2002 and Humphreys et al., 2002). Research on the technical efficiency and productivity of airports has adopted three alternative methods of measuring efficiency: First, the non-parametric linear programming methods called data envelopment analysis-DEA (Gillen and Lall, 1997, Gillen and Lall, 2001, Murillo-Melchor, 1999, Sarkis, 2000, Adler and Berechman, 2001, Martín and Román, 2001, Pels et al., 2001, Pels et al., 2003, Fernandes and Pacheco, 2002, Sarkis and Talluri, 2004, Yoshida and Fujimoto, 2004, Barros and Sampaio, 2004, Graham, 2005, Barros and Dieke, 2007, Barros and Dieke, 2008 and Fung et al., 2008). Second, are methods which use the parametric stochastic frontier model (Pels et al., 2001, Pels et al., 2003, Martín-Cejas, 2002, Barros, 2008a and Barros, 2008b). Third, are index numbers approaches, such as the Tornquist total factor productivity index (Coelli et al., 2003, p. 27; Douganis et al., 1995 and Hooper and Hensher, 1997) where such indexes are extended and estimated using the endogenous-weight total factor productivity approach (Yoshida, 2004 and Oum et al., 2003). We extend the efficiency studies cited above by estimating total factor productivity for UK airports using a Malmquist index, Malmquist (1953). In addition to measuring efficiency change from period to period, our method allows for biased technological change in the production of airport outputs and in the use of airport inputs. The motivation for the present research is the following: first, in prior research on UK airports’ technical efficiency, Barros (2008b) estimated a stochastic frontier model and found that the majority of UK airports were not improving their efficiency after 2000. Barros’ results contrast with prior research by Parker (1999) on BAA (British Airports Authority) airports, but these two papers used different data periods and different methods. However, the cause for declining technical efficiency is unclear and therefore an issue justifying more research. Second, recent acquisitions of UK airports by Spanish enterprises have increased competition. In 2004, TBI PLC, the owner of three regional airports in England, Wales, and Northern Ireland was acquired by a Spanish enterprise owned by AENA, the company that manages the Spanish airports, and Abertis, a Spanish construction company. In July 2006, BAA was taken over by a consortium led by the Spanish transportation group, Grupo Ferrovial. These acquisitions introduced competition in the field which is reflected in different efficient performance. Finally, while UK airports’ technical efficiency has been analyzed using DEA and stochastic frontier models, the productivity growth of those airports has not been analyzed, further justifying the present research. Therefore, the aim of this research is to investigate total factor productivity change of the UK airports using a Malmquist index (Färe and Grosskopf, 1996). The Malmquist index decomposes productivity change into gains or losses due to efficiency change and gains or losses due to technological change. Furthermore, our method relaxes the assumption of Hicks’ neutrality in the production of outputs and use of inputs by allowing for biased technological change to occur. Our method identifies the source of the bias in technological change. The article is structured as follows: Section 2 presents the institutional setting on UK airports. Section 3 presents the productivity models. Section 4 presents the data and the results. Section 5 discusses the results and provides some concluding remarks.