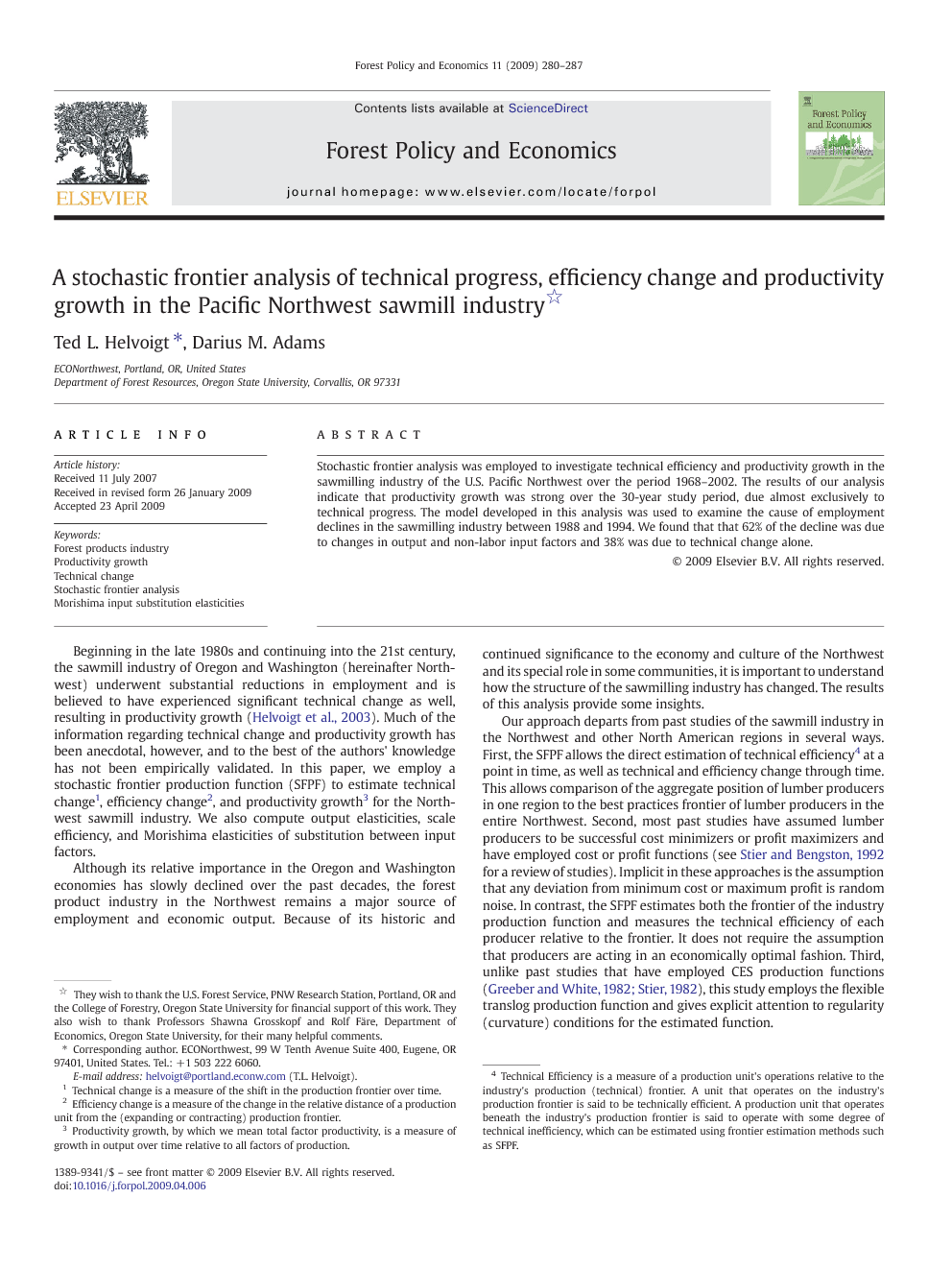 Stochastic frontier analysis was employed to investigate technical efficiency and productivity growth in the sawmilling industry of the U.S. Pacific Northwest over the period 1968–2002. The results of our analysis indicate that productivity growth was strong over the 30-year study period, due almost exclusively to technical progress. The model developed in this analysis was used to examine the cause of employment declines in the sawmilling industry between 1988 and 1994. We found that that 62% of the decline was due to changes in output and non-labor input factors and 38% was due to technical change alone.

Beginning in the late 1980s and continuing into the 21st century, the sawmill industry of Oregon and Washington (hereinafter Northwest) underwent substantial reductions in employment and is believed to have experienced significant technical change as well, resulting in productivity growth (Helvoigt et al., 2003). Much of the information regarding technical change and productivity growth has been anecdotal, however, and to the best of the authors' knowledge has not been empirically validated. In this paper, we employ a stochastic frontier production function (SFPF) to estimate technical change1, efficiency change2, and productivity growth3 for the Northwest sawmill industry. We also compute output elasticities, scale efficiency, and Morishima elasticities of substitution between input factors. Although its relative importance in the Oregon and Washington economies has slowly declined over the past decades, the forest product industry in the Northwest remains a major source of employment and economic output. Because of its historic and continued significance to the economy and culture of the Northwest and its special role in some communities, it is important to understand how the structure of the sawmilling industry has changed. The results of this analysis provide some insights. Our approach departs from past studies of the sawmill industry in the Northwest and other North American regions in several ways. First, the SFPF allows the direct estimation of technical efficiency4 at a point in time, as well as technical and efficiency change through time. This allows comparison of the aggregate position of lumber producers in one region to the best practices frontier of lumber producers in the entire Northwest. Second, most past studies have assumed lumber producers to be successful cost minimizers or profit maximizers and have employed cost or profit functions (see Stier and Bengston, 1992 for a review of studies). Implicit in these approaches is the assumption that any deviation from minimum cost or maximum profit is random noise. In contrast, the SFPF estimates both the frontier of the industry production function and measures the technical efficiency of each producer relative to the frontier. It does not require the assumption that producers are acting in an economically optimal fashion. Third, unlike past studies that have employed CES production functions (Greeber and White, 1982 and Stier, 1982), this study employs the flexible translog production function and gives explicit attention to regularity (curvature) conditions for the estimated function. SFPF estimates the industry's technical frontier based on the performance of the most efficient (i.e., most productive) production units (Kumbhakar and Lovell, 2000). Measures of the technical efficiency of each unit are then estimated based on the distance of the unit from the frontier. Estimates of productivity and/or technical efficiency derived from SFA are therefore relative, not absolute, measures.