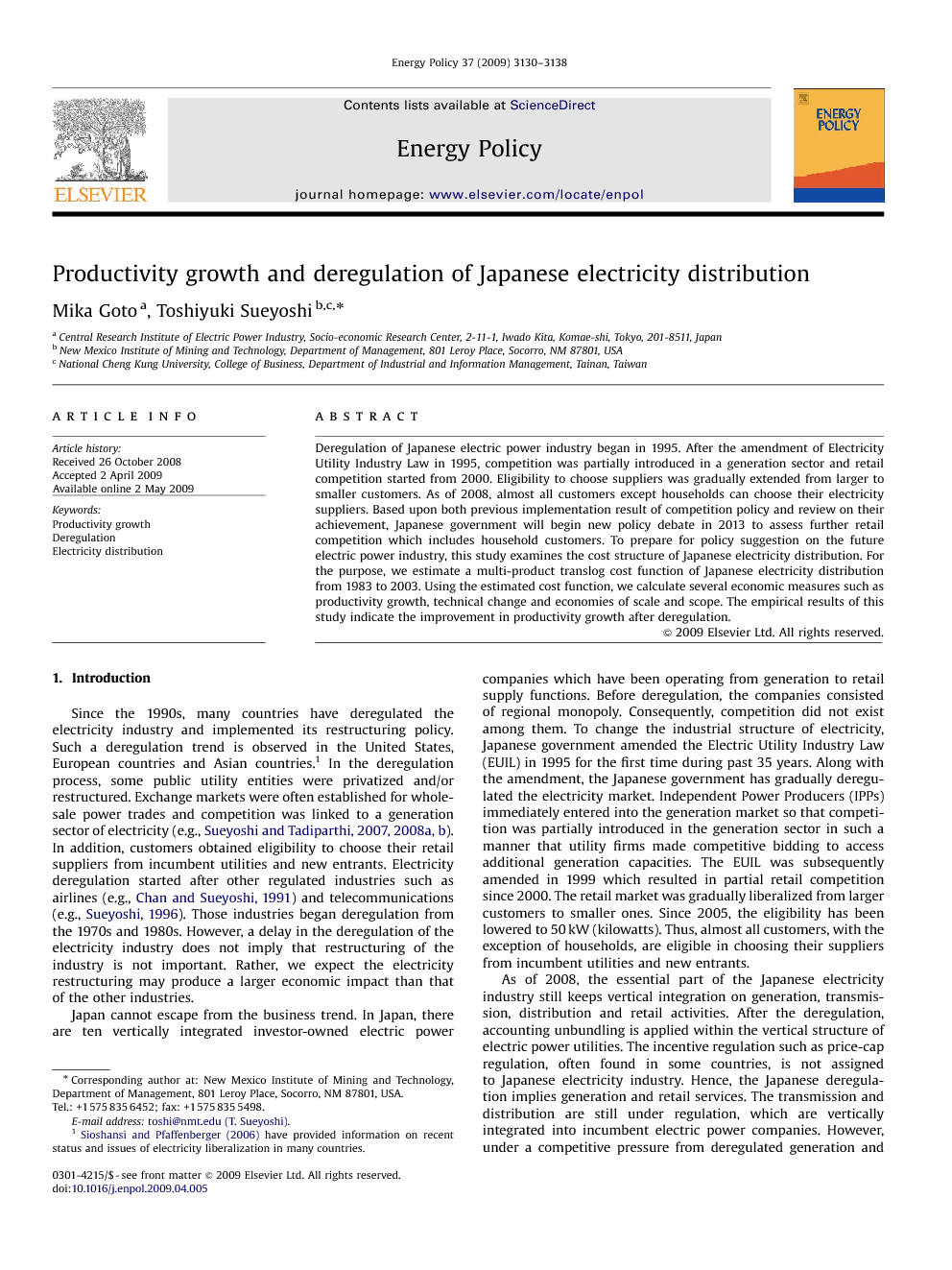 Deregulation of Japanese electric power industry began in 1995. After the amendment of Electricity Utility Industry Law in 1995, competition was partially introduced in a generation sector and retail competition started from 2000. Eligibility to choose suppliers was gradually extended from larger to smaller customers. As of 2008, almost all customers except households can choose their electricity suppliers. Based upon both previous implementation result of competition policy and review on their achievement, Japanese government will begin new policy debate in 2013 to assess further retail competition which includes household customers. To prepare for policy suggestion on the future electric power industry, this study examines the cost structure of Japanese electricity distribution. For the purpose, we estimate a multi-product translog cost function of Japanese electricity distribution from 1983 to 2003. Using the estimated cost function, we calculate several economic measures such as productivity growth, technical change and economies of scale and scope. The empirical results of this study indicate the improvement in productivity growth after deregulation.

Since the 1990s, many countries have deregulated the electricity industry and implemented its restructuring policy. Such a deregulation trend is observed in the United States, European countries and Asian countries.1 In the deregulation process, some public utility entities were privatized and/or restructured. Exchange markets were often established for wholesale power trades and competition was linked to a generation sector of electricity (e.g., Sueyoshi and Tadiparthi, 2007, Sueyoshi and Tadiparthi, 2008a and Sueyoshi and Tadiparthi, 2008b). In addition, customers obtained eligibility to choose their retail suppliers from incumbent utilities and new entrants. Electricity deregulation started after other regulated industries such as airlines (e.g., Chan and Sueyoshi, 1991) and telecommunications (e.g., Sueyoshi, 1996). Those industries began deregulation from the 1970s and 1980s. However, a delay in the deregulation of the electricity industry does not imply that restructuring of the industry is not important. Rather, we expect the electricity restructuring may produce a larger economic impact than that of the other industries. Japan cannot escape from the business trend. In Japan, there are ten vertically integrated investor-owned electric power companies which have been operating from generation to retail supply functions. Before deregulation, the companies consisted of regional monopoly. Consequently, competition did not exist among them. To change the industrial structure of electricity, Japanese government amended the Electric Utility Industry Law (EUIL) in 1995 for the first time during past 35 years. Along with the amendment, the Japanese government has gradually deregulated the electricity market. Independent Power Producers (IPPs) immediately entered into the generation market so that competition was partially introduced in the generation sector in such a manner that utility firms made competitive bidding to access additional generation capacities. The EUIL was subsequently amended in 1999 which resulted in partial retail competition since 2000. The retail market was gradually liberalized from larger customers to smaller ones. Since 2005, the eligibility has been lowered to 50 kW (kilowatts). Thus, almost all customers, with the exception of households, are eligible in choosing their suppliers from incumbent utilities and new entrants. As of 2008, the essential part of the Japanese electricity industry still keeps vertical integration on generation, transmission, distribution and retail activities. After the deregulation, accounting unbundling is applied within the vertical structure of electric power utilities. The incentive regulation such as price-cap regulation, often found in some countries, is not assigned to Japanese electricity industry. Hence, the Japanese deregulation implies generation and retail services. The transmission and distribution are still under regulation, which are vertically integrated into incumbent electric power companies. However, under a competitive pressure from deregulated generation and retail activities, Japanese electric power companies are now directing themselves toward the cost efficiency of their distribution in order to improve their productivity. Considering the implementation result of past deregulation policy in Japan and the current status of electricity restructuring in the other nations, the Japanese government will initiate a policy debate from 2013 among policy makers, corporate leaders, and individuals who are interested in the policy issue on electricity. The main issue will be the expansion of eligibility to household customers. We are interested in the policy issue because the deregulation was introduced to improve the cost efficiency of the industry and thereby, to provide end users with lower electricity rates. Before the policy debate for further retail competition, it is important for us to examine the impact of deregulation on the electricity industry from a perspective of productivity growth and cost structure of the industry. In particular, we need to examine the distribution division because the impact of deregulation has not been fully investigated in terms of electricity distribution even though the distribution network is technically important for successfully operating the deregulated power market. The purpose of this research is to measure the productivity growth of the distribution division of Japanese electric power companies and examine the impact of deregulation on the productivity. To attain the research objective, this study estimates a multi-product cost function of the distribution divisions in Japanese electric power companies, using a panel data set (1983–2003). This study also examines a technical change and economies of scale, which are components of productivity growth, and economies of scope between distribution services to regulated and deregulated customers. The remainder of this study is organized as follows. Section 2 reviews previous studies concerning electricity deregulation. Section 3 describes economic concepts and estimation methods utilized in this study. Section 4 describes a multi-product translog cost function to approximate an unknown cost structure of Japanese electricity distribution sector. Section 5 describes a data set used in this study. Section 6 summarizes empirical results obtained from our investigation. This section also documents policy implications for Japanese electricity industry and its future deregulation. Section 7 concludes this study along with future research agendas.

The empirical results obtained from this study indicate that the Japanese electricity distribution has operated under the existence of economies of scale. An exception was found in a few companies. This implies that an economic loss would occur in most of incumbent utilities if they lose their customers as a result of competition with new entrants in the market. Unlike the mixed results on economies of scale at the level of each company, a similar trend was observed in the technical change of all companies. This study could not provide any evidence concerning a positive technical change, or a technological progress, in the Japanese electricity distribution. Instead, the “negative” technical change was identified in all electric power companies during the entire observed period. Such a negative technical change implies that the Japanese electric power companies have employed cost-increasing technology for producing a given output by accumulating a large amount of capital during the observed period, particularly under the governmental revenue protection policy of rate-of-return (ROR) regulation before deregulation. Such a large amount of investment resulted in a higher standard of supply reliability in Japanese electricity distribution. On the other hand, the investment issue is often discussed as an over-investment problem under the ROR regulation (e.g., Akkemik, 2009 which discussed the Averch–Johnson effect regarding Turkish electricity generation). However, temporal improvement was observed in the technical change measures which changed from large negative to small negative. Such improvement in the technical change was caused by a drastic reduction of the capital investment as a managerial effort to reduce cost after deregulation. However, there was a time lag until the effect appeared in the reduction of capital and cost for electric power companies. Another interesting finding was that the impact of economies of scale on the productivity growth was smaller than that of the technical change. As a result, the TFP growth was negative. The negative TFP growth requested a further managerial effort in the electric power companies to reduce their distribution cost. In addition, the empirical results revealed that control variables (i.e., load factor, customer density, and underground ratio of lines) affected the cost of distribution in Japanese electric power companies. This finding suggests that we should control the variables when we evaluate the cost of electricity distribution. Furthermore, the results did not identify clear evidence regarding whether economies of scope exist between services to two types of customer groups (regulated household customers and liberalized industrial/commercial customers). Consequently, an extended economic study needs to be done for future policy debate on the expansion of eligibility to household customers. As a future extension of this study, we need to apply the proposed approach to the energy utility industries of other industrial nations that have not yet experienced full retail competition. The methodology used in this study and its derived empirical results are useful for policy discussion in the other industrial nations. Moreover, further investigation for the use of advanced panel data models may provide new insights for the measurement of cost efficiency of firms. Such applications will enhance the practicality of this type of research. That is another future extension of this study. Finally, it is hoped that this study makes a contribution in the area of energy policy. We look forward to seeing further research extensions, as discussed in this study.