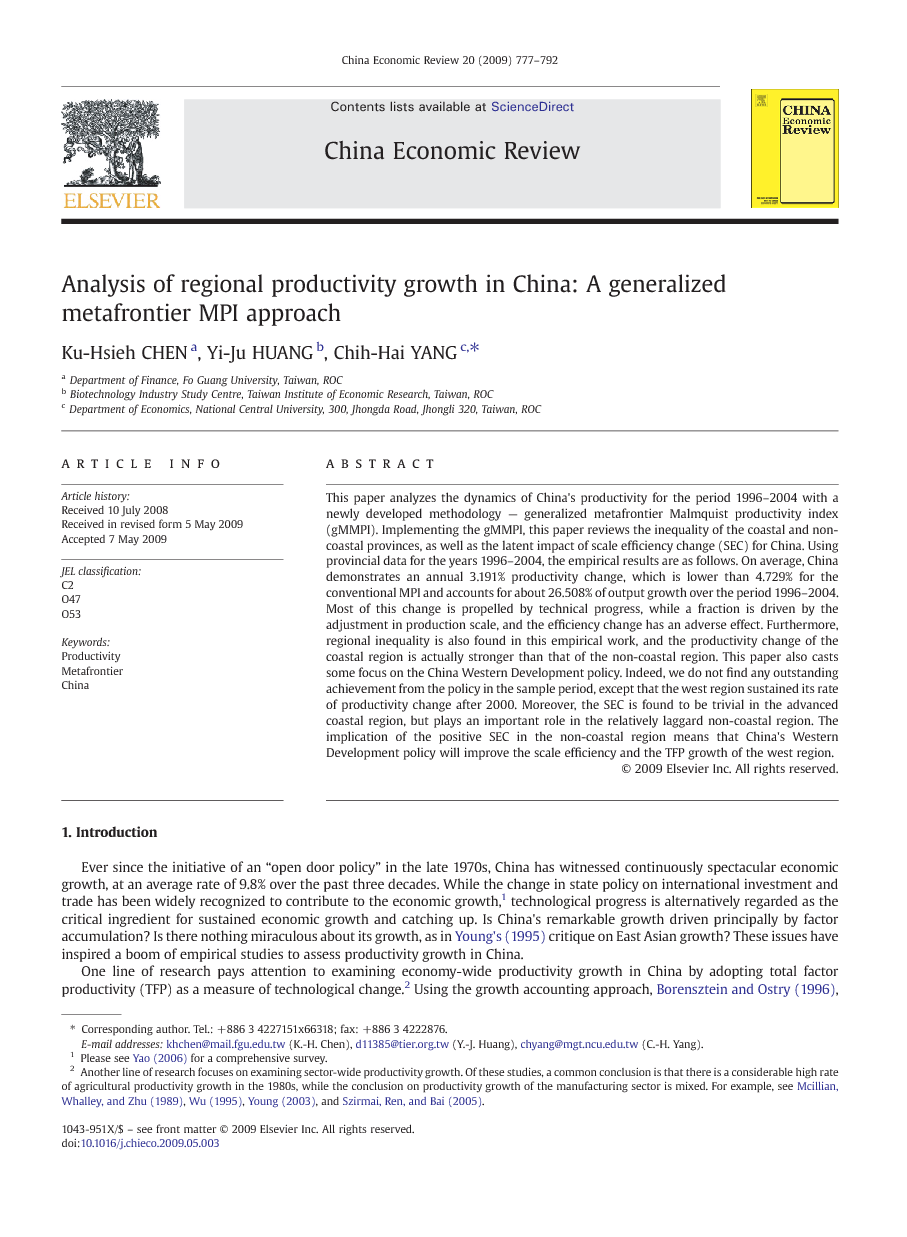 This paper analyzes the dynamics of China's productivity for the period 1996–2004 with a newly developed methodology — generalized metafrontier Malmquist productivity index (gMMPI). Implementing the gMMPI, this paper reviews the inequality of the coastal and non-coastal provinces, as well as the latent impact of scale efficiency change (SEC) for China. Using provincial data for the years 1996–2004, the empirical results are as follows. On average, China demonstrates an annual 3.191% productivity change, which is lower than 4.729% for the conventional MPI and accounts for about 26.508% of output growth over the period 1996–2004. Most of this change is propelled by technical progress, while a fraction is driven by the adjustment in production scale, and the efficiency change has an adverse effect. Furthermore, regional inequality is also found in this empirical work, and the productivity change of the coastal region is actually stronger than that of the non-coastal region. This paper also casts some focus on the China Western Development policy. Indeed, we do not find any outstanding achievement from the policy in the sample period, except that the west region sustained its rate of productivity change after 2000. Moreover, the SEC is found to be trivial in the advanced coastal region, but plays an important role in the relatively laggard non-coastal region. The implication of the positive SEC in the non-coastal region means that China's Western Development policy will improve the scale efficiency and the TFP growth of the west region.

This paper aims to reassess the regional productivity growth in China. To avoid the potential limitation of China's statistical data, as noted in the literature, and taking into account the characteristics of regional inequality between coastal and non-coastal regions inside China, a rigorously tailor-made methodology is needed. First, this paper embraces the concept of a metafrontier production function model as a means for accurately assessing the issue. The reason for this is mainly because the coastal and non-coastal regions of China face a potentially common metafrontier regardless of the intuitive, theoretical and empirical angles that would assign them to different technology sets and distinct group frontiers. Here, the underlying background is due to the fact that the economic infrastructure and the characteristics of the production environment in the two regions are widely recognized as heteroskedastic. Nonetheless, from a more long-term perspective, it is possible that the technology gaps might be lessened through designing programs to improve the economic infrastructure and/or to refine the characteristics of the production environment. Furthermore, this paper extends O'Donnell et al.'s (2008) metafrontier Malmquist productivity index (MMPI) approach and then develops a framework of generalized MMPI (gMMPI) for meeting the requirement. We impose the regular conditions of a well-constructed productivity index on the MMPI to rectify the potential deficiency that the MMPI does not have the property of proportionality. The major operation is to use the distance elasticity share of inputs to substitute the distance elasticity of inputs for ensuring the weight of cross-period change in inputs of the productivity measure being one to conform to the condition of homogenous of degree 1. This operation has the advantage of developing the MMPI to become a more theoretically rigorous construction. Further, we induct the revised MMPI mathematically and decompose a component of scale efficiency change from it, in addition to the other two components, technical efficiency change and technical change. The scale efficiency change gauges the extent of cross-periods adjustment of production scales toward the technically optimal productive size. Therefore the gMMPI framework is a relatively theoretically complete and rigorous productivity index measure, which gives us the advantage of being able to assess the regional productivity growth and its inclusions in China while considering the characteristic of regional inequality between the coastal and non-coastal regions inside China. Our empirical analysis shows that on the surface of output growth, the ingredient of productivity gains indeed supports China's striking economic performance. The TFP growth is about 3.191%, which accounts for about 26.508% of annual output growth over the period from 1996 to 2004. Second, from the introduction of the metafrontier-based methodology, the productivity change should comprise three terms: technical efficiency change, technical and scale efficiency changes; while more of the change is propelled by technical progress (3.395%), and a fraction is driven by the adjustment in production scale (0.399%) and the efficiency change has an adverse effect (− 0.569%). We also ask whether the regional inequality in terms of productivity was harmonized in the past decade. We find that the margin of productivity change in the coastal region seems to shrink more even though growth remained high. Relatively, the western region can sustain its growth despite an absolute low figure. The relative productivity slow-down in the provinces of the coastal region may be due to the natural process of convergence, as discussed in Wu (2000). This paper also focuses on the China Western Development policy. Indeed, it can be inferred from this study that the Western Development policy has not significantly manifested a benefit on the dimension of TFP in the sample period of 2000 to 2004. However, our results show that the rate of productivity change is sustained for the western region after 2000. Indeed, it is not unusual to obtain such results, since the productivity growth is a concept utilizing a long-term view and there might not have been enough time yet to demonstrate the attainment of the policy. In its initial stage, the Western Development policy places the most focus on the construction of infrastructure, and it is therefore not easy to find significant achievement in the short term. Finally, an alternative issue introduced from our empirical analysis is also noteworthy. In the past, factor accumulation was usually criticized as having no implication in productivity growth. However, we would like to indicate that it is not necessarily the case for all the development phases. Rather, once the usable technology is matched up, the factor accumulation still contributes to productivity. Perhaps the position of factor accumulation is trivial from the perspective of an advanced economy, but for emerging economies in the initial development stage, the scale adjustment plays an important and non-negligible role on TFP growth. Some key economic policy implications can be taken from the results. While China's productivity growth has slowed since the mid-1990s, it is still a spectacular performance when compared to Asian developing and advanced countries. From the perspective of sustainable growth, how to ease the decreasing trend of productivity growth is a critical issue. China should therefore put more effort into innovative activity as well as into protecting intellectual property rights to promote economic growth. Moreover, as indicated in the above discussion, there are differences in productivity growth and its composition between coastal and non-coastal regions. This implies that the government should formulate a specific development policy for the inland region to reduce the income inequality between coastal and non-coastal regions. Essentially, the “China Western Development” policy is moving in the correct direction by enabling the western regions to have actually experienced good performance in economic growth in the short term. More importantly, as is also echoed in the recent critical literature of Fleisher et al. (2009) concerning China's regional disparity, the government should carry out some policies to promote persistent TFP growth for the inland regions, such as promoting human resources and technological capability.