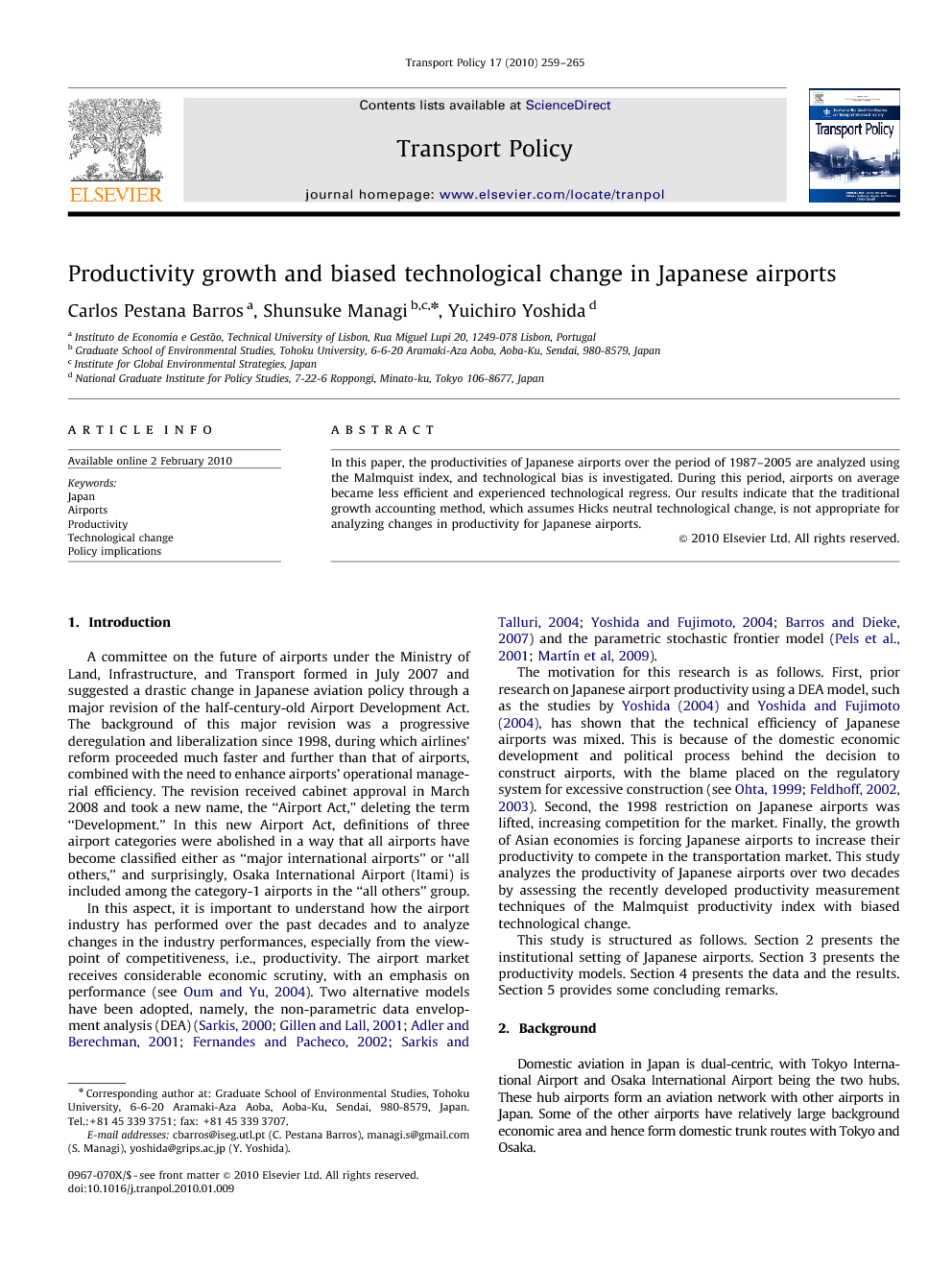 A committee on the future of airports under the Ministry of Land, Infrastructure, and Transport formed in July 2007 and suggested a drastic change in Japanese aviation policy through a major revision of the half-century-old Airport Development Act. The background of this major revision was a progressive deregulation and liberalization since 1998, during which airlines’ reform proceeded much faster and further than that of airports, combined with the need to enhance airports’ operational managerial efficiency. The revision received cabinet approval in March 2008 and took a new name, the “Airport Act,” deleting the term “Development.” In this new Airport Act, definitions of three airport categories were abolished in a way that all airports have become classified either as “major international airports” or “all others,” and surprisingly, Osaka International Airport (Itami) is included among the category-1 airports in the “all others” group. In this aspect, it is important to understand how the airport industry has performed over the past decades and to analyze changes in the industry performances, especially from the viewpoint of competitiveness, i.e., productivity. The airport market receives considerable economic scrutiny, with an emphasis on performance (see Oum and Yu, 2004). Two alternative models have been adopted, namely, the non-parametric data envelopment analysis (DEA) (Sarkis, 2000; Gillen and Lall, 2001; Adler and Berechman, 2001; Fernandes and Pacheco, 2002; Sarkis and Talluri, 2004; Yoshida and Fujimoto, 2004; Barros and Dieke, 2007) and the parametric stochastic frontier model (Pels et al., 2001; Martín et al, 2009). The motivation for this research is as follows. First, prior research on Japanese airport productivity using a DEA model, such as the studies by Yoshida (2004) and Yoshida and Fujimoto (2004), has shown that the technical efficiency of Japanese airports was mixed. This is because of the domestic economic development and political process behind the decision to construct airports, with the blame placed on the regulatory system for excessive construction (see Ohta, 1999; Feldhoff, 2002 and Feldhoff, 2003). Second, the 1998 restriction on Japanese airports was lifted, increasing competition for the market. Finally, the growth of Asian economies is forcing Japanese airports to increase their productivity to compete in the transportation market. This study analyzes the productivity of Japanese airports over two decades by assessing the recently developed productivity measurement techniques of the Malmquist productivity index with biased technological change. This study is structured as follows. Section 2 presents the institutional setting of Japanese airports. Section 3 presents the productivity models. Section 4 presents the data and the results. Section 5 provides some concluding remarks.

In this paper, we estimate the Malmquist input-based index of total factor productivity for 16 Japanese airports operating from 1987 to 2005. Productivity change is partitioned into an index of efficiency change and an index of technical change. The contribution of this paper to the literature with respect to technique is threefold: improving on existing methods that use DEA, comparing and contrasting relative approaches, and comparing and contrasting variations. Throughout the period, Japanese airports experienced average decrease in most of the productivity measurements. Airports on average became less efficient and experienced technological regression. The Malmquist index separates the index of technological change into separate indexes of output bias, input bias, and magnitude of technological change, enabling a closer dissection of the productivity changes in airports. Our estimates of productivity change and technological bias indicate that the traditional growth accounting method, which assumes Hicks neutral technological change, is not appropriate for analyzing changes in the productivity of Japanese airports. What is the policy implication of such results? The main policy implication is that the Japanese airports need to increase their efficiency. Benchmark analysis can be used to pursue such an aim. Furthermore, the bias in input and output change does not increase efficiency. Therefore, a new policy is required to make changes in inputs and outputs to work toward productivity improvement. Further research is needed to confirm the results of this study. The reforms in 1998 and 2000 request airports to better utilize and efficiency improvement of existing airports. Once commercialisation, privatisation, and restructuring in terms of size and ownership are quantified, it is possible to identify what policies might make these airports more efficient. In addition, it is important to note that we analyzed only the airports with a full panel of data for 1987–2005. Therefore, new and potentially more efficient airports are not included even though these might divert traffic from existing airports. Also, our output measure is based on volume rather than distance traveled. Airports might be less efficient over time because they are dealing with longer-haul traffic. Future studies in other countries need to incorporate data on distance traveled into the output data with the results expressed in terms of volume.