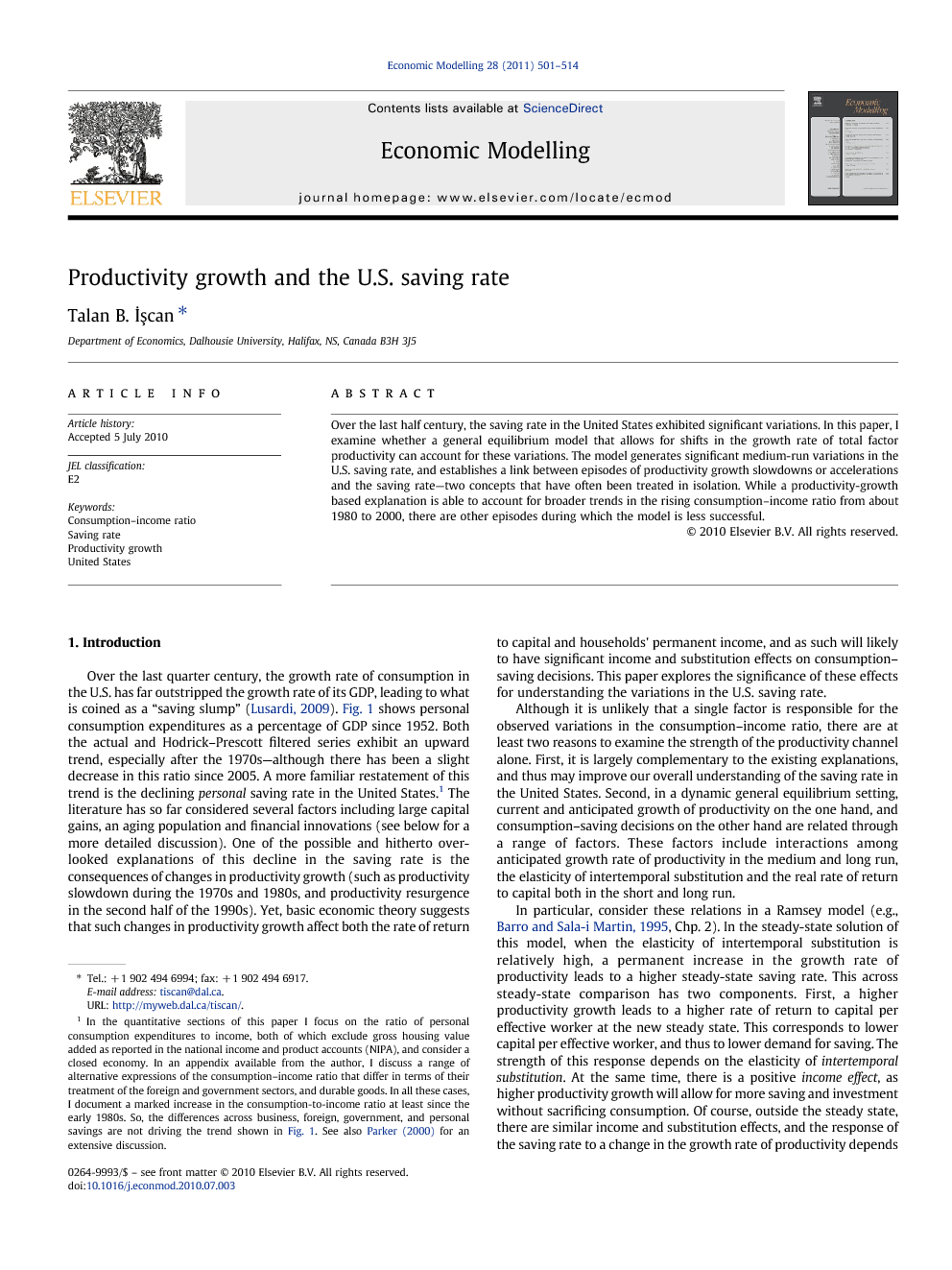 Over the last half century, the saving rate in the United States exhibited significant variations. In this paper, I examine whether a general equilibrium model that allows for shifts in the growth rate of total factor productivity can account for these variations. The model generates significant medium-run variations in the U.S. saving rate, and establishes a link between episodes of productivity growth slowdowns or accelerations and the saving rate—two concepts that have often been treated in isolation. While a productivity-growth based explanation is able to account for broader trends in the rising consumption–income ratio from about 1980 to 2000, there are other episodes during which the model is less successful.

The general equilibrium analysis I presented in this paper relies on a highly compact (and stylized) modeling approach. It emphasizes a quantitative strategy that maps model-based variables to their empirical counterparts as closely as possible. In fact, throughout much of the analysis, I focused on relatively narrow concepts of market consumption and income, and particularly on those to which the model can speak. The baseline model matches the broader (medium-run) variations in the consumption–income ratio and rate of return to capital in the United States, especially during the remarkable decline in the U.S. saving rate from 1980 to 2000, but it is not completely satisfactory. The extended model with housing leads to a better match between the actual and model-based series. However, this model also fails to account for the persistent and relatively higher consumption–income ratio at the end of the period of analysis (from 2000 to 2006). Although an open economy extension of this model with a current account is beyond the scope of this paper, it is worth mentioning several pertinent issues.28 First, despite significant fluctuations in the U.S. current account deficits since the early 1980s, the U.S. personal saving rate declined unabated. This suggests that predominantly domestic factors might have been responsible for the “saving slump” in the United States. Second, Curcuru et al. (2008, pp. 1523–1525) argue that available measures of the U.S. current account deficits are plagued by relatively underappreciated measurement errors. For instance, they argue that U.S. current account deficits may be significantly overstated—as much as 0.8% of GDP. So, an analysis of the U.S. saving rate in an open economy context faces a different set of conceptual and measurement issues. This paper has argued that the economy-wide productivity growth in the United States exhibited substantial variations since the 1950s, and used these variations to account for the variations in the U.S. saving rate. The results suggest that real-time forecasts of long-term productivity growth provide a better understanding of the actual data. In this context, building models with learning as a way to study aggregate saving rates strikes me as a promising avenue for future research.