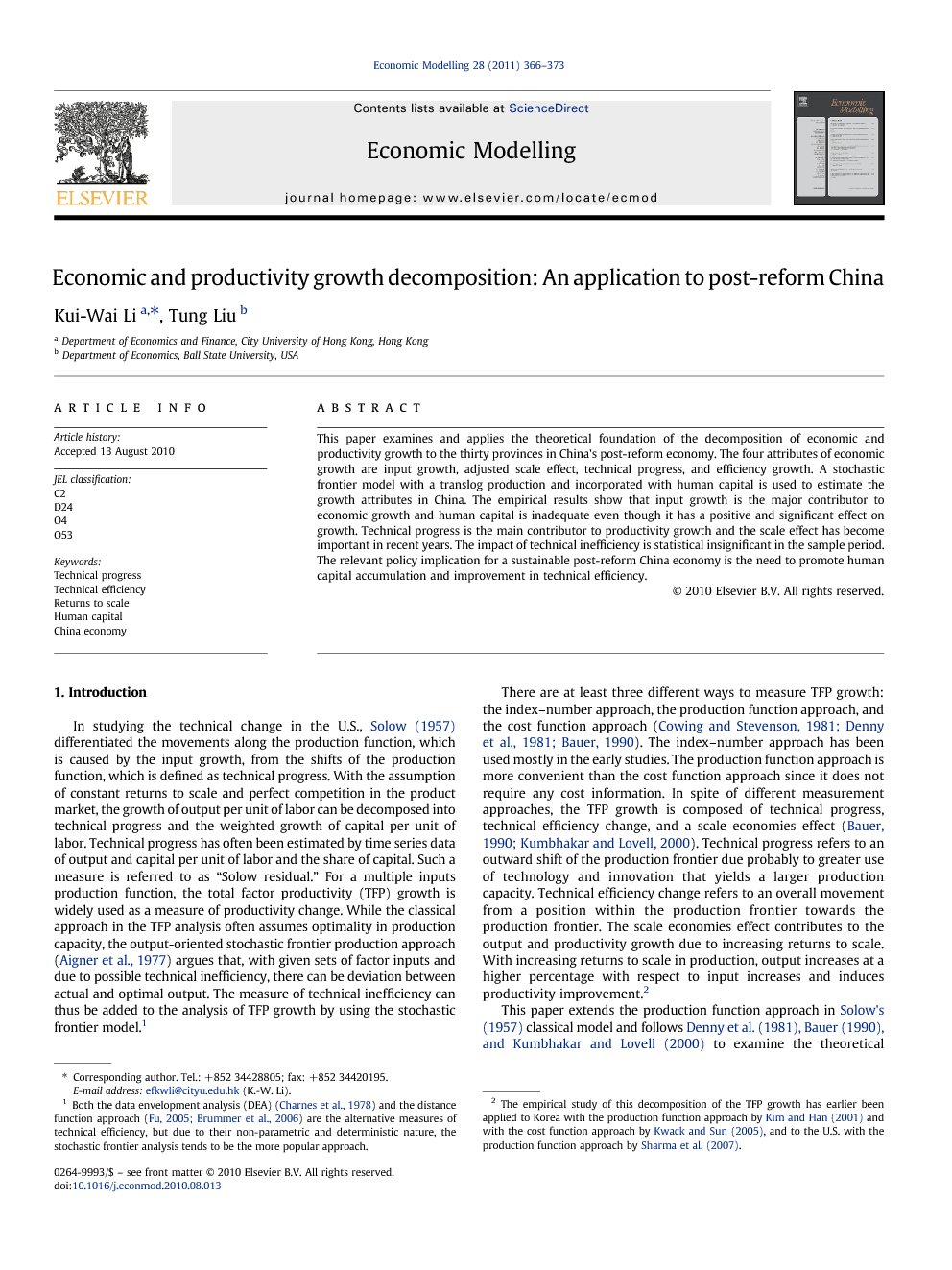 This paper examines and applies the theoretical foundation of the decomposition of economic and productivity growth to the thirty provinces in China's post-reform economy. The four attributes of economic growth are input growth, adjusted scale effect, technical progress, and efficiency growth. A stochastic frontier model with a translog production and incorporated with human capital is used to estimate the growth attributes in China. The empirical results show that input growth is the major contributor to economic growth and human capital is inadequate even though it has a positive and significant effect on growth. Technical progress is the main contributor to productivity growth and the scale effect has become important in recent years. The impact of technical inefficiency is statistical insignificant in the sample period. The relevant policy implication for a sustainable post-reform China economy is the need to promote human capital accumulation and improvement in technical efficiency.

In studying the technical change in the U.S., Solow (1957) differentiated the movements along the production function, which is caused by the input growth, from the shifts of the production function, which is defined as technical progress. With the assumption of constant returns to scale and perfect competition in the product market, the growth of output per unit of labor can be decomposed into technical progress and the weighted growth of capital per unit of labor. Technical progress has often been estimated by time series data of output and capital per unit of labor and the share of capital. Such a measure is referred to as “Solow residual.” For a multiple inputs production function, the total factor productivity (TFP) growth is widely used as a measure of productivity change. While the classical approach in the TFP analysis often assumes optimality in production capacity, the output-oriented stochastic frontier production approach (Aigner et al., 1977) argues that, with given sets of factor inputs and due to possible technical inefficiency, there can be deviation between actual and optimal output. The measure of technical inefficiency can thus be added to the analysis of TFP growth by using the stochastic frontier model.1 There are at least three different ways to measure TFP growth: the index–number approach, the production function approach, and the cost function approach (Cowing and Stevenson, 1981, Denny et al., 1981 and Bauer, 1990). The index–number approach has been used mostly in the early studies. The production function approach is more convenient than the cost function approach since it does not require any cost information. In spite of different measurement approaches, the TFP growth is composed of technical progress, technical efficiency change, and a scale economies effect (Bauer, 1990 and Kumbhakar and Lovell, 2000). Technical progress refers to an outward shift of the production frontier due probably to greater use of technology and innovation that yields a larger production capacity. Technical efficiency change refers to an overall movement from a position within the production frontier towards the production frontier. The scale economies effect contributes to the output and productivity growth due to increasing returns to scale. With increasing returns to scale in production, output increases at a higher percentage with respect to input increases and induces productivity improvement.2 This paper extends the production function approach in Solow's (1957) classical model and follows Denny et al., 1981, Bauer, 1990 and Kumbhakar and Lovell, 2000 to examine the theoretical foundation of the decomposition of economic and productivity growth. We relax the assumption of constant returns to scale and consider technical inefficiency in a stochastic frontier model. The output growth is then decomposed into: input growth, adjusted scale effect, technical progress, and efficiency growth. Furthermore, TFP growth is decomposed into: adjusted scale effect, technical progress, and efficiency growth (Kumbhakar and Lovell, 2000). The empirical study on the post-reform China economy is based on the stochastic frontier model with a translog production function (Christensen et al., 1971) that incorporates a human capital variable. Although the production stochastic frontier analysis has been used in other studies on the Chinese economy, most studies have focused on one or two components of productivity growth, while technical progress and/or returns to scale have been absent (Kalirajan et al., 1996, Carter and Estrin, 2001, Hu and McAleer, 2005, Tong, 1999, Dong and Putterman, 1997, Wu, 1995, Wu, 2000 and Wu, 2000). Lacking a distinct method of constructing China's physical and human capital stocks in recent studies (Bai et al., 2006, He et al., 2007, Funke and Yu, 2009, Perkins and Rawski, 2008, Qian and Smyth, 2006 and Urel and Zebregs, 2009), this paper chooses to extend, revise and update the dataset and the methodology used in deriving the national and provincial physical capital and human capital stocks in Chow and Li, 2002, Liu and Li, 2006, Li, 2003, Li, 2009 and Li et al., 2009 and estimates the components of the economic and productivity growth for China's thirty provinces for the sample period of 1985–2006. China's national and provincial capital are approximated from investment figures (Chow, 1993), while a perpetual inventory approach adjusted by provincial migration and mortality rates is used in the construction of the human capital stock (Wang and Yao, 2003, Barro and Lee, 2001 and Howitt, 2005). Section 2 discusses the theoretic foundation of the decomposition of economic and productivity growth, Section 3 elaborates on the data used for empirical estimation of the growth experience in post-reform China and introduces the empirical model. Section 4 presents the empirical results, while Section 5 concludes the study.

This paper examines and applies the theoretic foundation of the decomposition of economic and productivity growth to China's post-reform economy. Our theoretic discussion follows that of Solow, 1957, Denny et al., 1981, Bauer, 1990 and Kumbhakar and Lovell, 2000 and shows that cost information is not required in estimating the components of decomposition and the production function approach is sufficient for the empirical work. The economic growth is decomposed into input growth, adjusted scale effect, technical progress, and growth in technical efficiency. With this decomposition, the TFP growth simply contains the last three components. The growth of aggregate input is the weighted sum of each input growth and the weight is the cost share of each input. The adjusted scale effect depends on the size of returns to scale. This effect is zero for constant returns to scale, but is adjusted by the aggregate input growth for increasing and decreasing returns to scale. Technical progress in the decomposition represents the shift of the production function over time. The technical efficiency can be measured and derived from stochastic frontier model. For our empirical work on the production function, we have derived the physical and human capital stocks data using the inventory method for the thirty provinces of China for the period 1984–2006. The average number of schooling years is used as the proxy for the human capital stock, where the numbers of graduates, provincial immigration and mortality at various education levels are taken into account. We have updated and extended the TFP analysis in Chow and Li, 2002, Li, 2003 and Liu and Li, 2006 with stochastic frontier analysis. We estimate the stochastic frontier translog production function using the maximum-likelihood estimation method. Our empirical results show that the three factor inputs (physical capital, labor and human capital) are important for output performance. Among the three inputs, physical capital is the most important factor in China's post-reform economic growth. This conclusion is consistent with earlier studies (Galor and Moav, 2003, Goldin and Katz, 1998, Goldin and Katz, 1999 and Goldin and Katz, 2001). The role of human capital will become significant in the more mature stage of economic development, and it is important for China to upgrade its human capital for sustainable economic development. When the three sources of the growth of TFP are considered, we found that the major contributor to the TFP growth is technology progress. The contribution from adjusted scale effect is increasing in our sample period. The empirical results do bring forward several policy implications on the sustainability of the post-reform China economy. It is necessary for China to promote investments that are more productive, especially those embodied with technology. Policies should be geared to improve technical efficiency and utilize resources effectively. While labor is plentiful, developed human capital is scarce in China. It will take a relatively long time for individuals to be educated and trained. Thus, continuous investment in education and training is necessary. Mobility of human capital can facilitate knowledge spillovers across different provinces in China, and encouraging international in-flows of talents might also be necessary. It will be interesting for future analysis, for example, to consider the efficiency level among industries in different regions in the post-reform China.