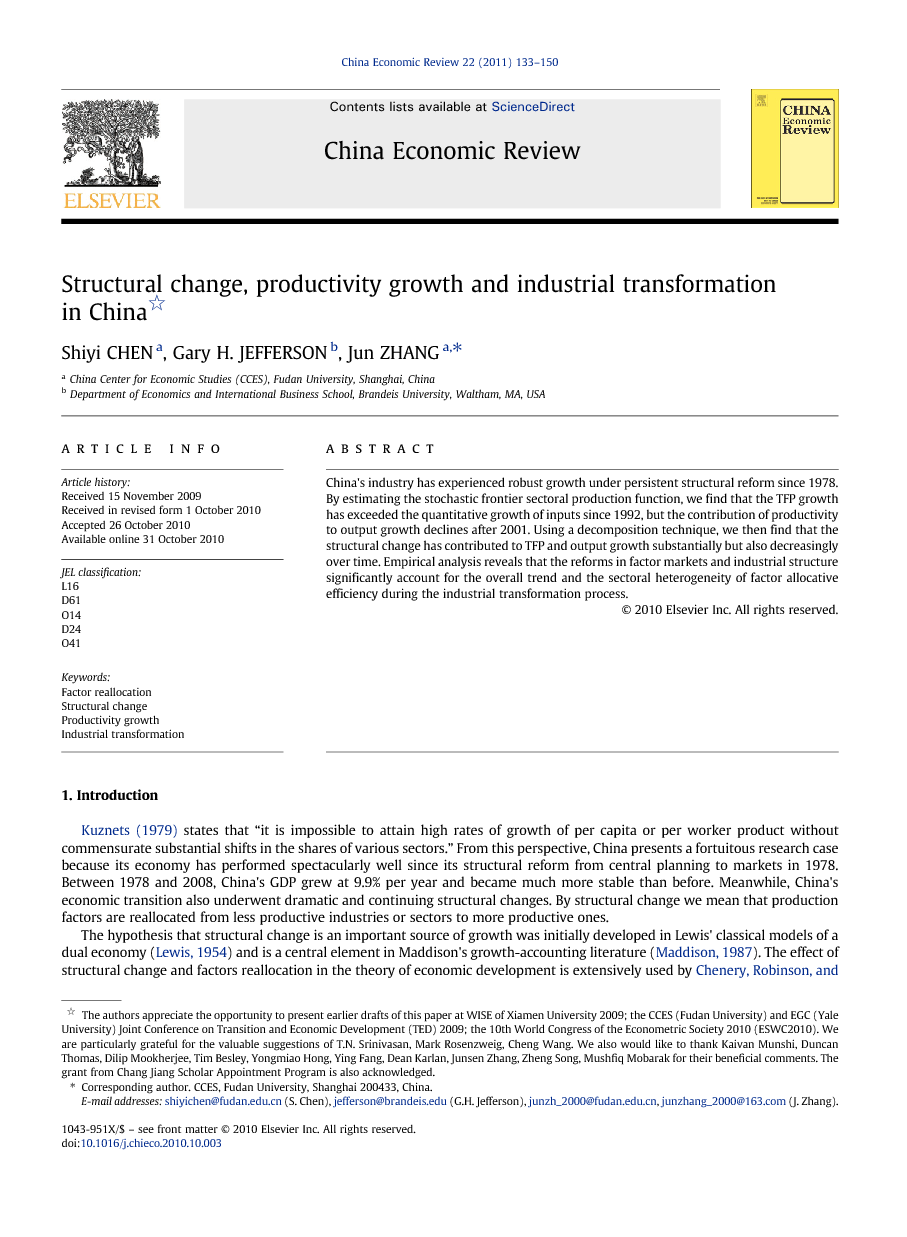 China's industry has experienced robust growth under persistent structural reform since 1978. By estimating the stochastic frontier sectoral production function, we find that the TFP growth has exceeded the quantitative growth of inputs since 1992, but the contribution of productivity to output growth declines after 2001. Using a decomposition technique, we then find that the structural change has contributed to TFP and output growth substantially but also decreasingly over time. Empirical analysis reveals that the reforms in factor markets and industrial structure significantly account for the overall trend and the sectoral heterogeneity of factor allocative efficiency during the industrial transformation process.

Kuznets (1979) states that “it is impossible to attain high rates of growth of per capita or per worker product without commensurate substantial shifts in the shares of various sectors.” From this perspective, China presents a fortuitous research case because its economy has performed spectacularly well since its structural reform from central planning to markets in 1978. Between 1978 and 2008, China's GDP grew at 9.9% per year and became much more stable than before. Meanwhile, China's economic transition also underwent dramatic and continuing structural changes. By structural change we mean that production factors are reallocated from less productive industries or sectors to more productive ones. The hypothesis that structural change is an important source of growth was initially developed in Lewis' classical models of a dual economy (Lewis, 1954) and is a central element in Maddison's growth-accounting literature (Maddison, 1987). The effect of structural change and factors reallocation in the theory of economic development is extensively used by Chenery, Robinson, and Syrquin (1986) and Syrquin (1995), who show that it is an important factor explaining growth performances. The models of industrial development proposed by Lucas (1993) from the supply side and Verspagen (1993) from the demand side also stress the importance of structural change in productivity growth. Harberger (1998) vividly presents a “mushroom-process” where continuous factors shifts into specific dynamic sectors drive growth and then productivity varies considerably across sectors. This vision of growth contrasts with a “yeast-process” in which economy-wide growth tendencies predominate. Many researchers have found that the effect of structural change and factors allocation on economic performance is significantly positive (Akkemik, 2005, Berthelemy, 2001, Nelson and Pack, 1999 and Ngai and Pissarides, 2007). Some researchers find that the effect does not exist or is very small (Caselli, 2005). In the examination of the role of structural change in productivity growth in the manufacturing sector of the four Asian NIEs, Timmer and Szirmai (2000) refer to this positive effect of factor reallocation across sectors on industrial growth as the structural-bonus hypothesis. This terminology has extensively been used since then. In the case of China, the central government opted for the heavy-industry-oriented development strategy to catch up with the developed world after the overthrow of infant capitalism and 3 years of land reforms over half a century ago. The strategy of utilizing China's comparative disadvantage has resulted in the persistence of a dual economy, leading to massive distortion in the factor market. The danger of the imminent collapse of China's economy pushed the central government to commence economic reforms since 1978. The evolution of China's market economy from its old system necessitated profound structural changes. As shown in Fig. 1, for example, there is a substantial fall in the share of labor force in primary industry from 83.5% in 1952 to 39.6% in 2008 and a steady increase in tertiary industry, broadly consistent with the general characteristics of the structural transformation process documented in the literature of transitioning economies. The composition of labor force in second industry increased continuously from a low of 7.4% in 1952 to a peak of 27.2% in 2008 which is different from the experience of industrialized economies with a hump-shaped pattern. This indicates that China's industrialization is still in the early phase and has room to absorb more labor and further develop its labor-intensive sectors. Corresponding to this structural change, the share of industrial value-added has increased from a low of 17.6% in 1952 to a high of 44.1% in 1978 under the catch-up strategy and has remained stable around 40% until today. The share in primary industry decreased continuously to only 11.3% in 2008 while the share in services also grew sharply after the reform.Many researchers investigate the effect of structural change across three strata of industry or across regions on China's productivity growth and economic performance; for example, see Fan, Zhang, and Robinson (2003), Fleisher and Yang (2003), Wu and Yao (2003), Heckman (2005), Au and Henderson (2006), Bhaumik and Estrin (2007), Bosworth and Collins (2008), Gong and Lin (2008), to name a few. They do not discuss the factor shifts across industrial sectors. Economists also believe that resources are restricted within sectors, and as the industrial development literatures suggest, it is necessary to reallocate the factors across sectors to boost industrial productivity and output growth. Moreover, China is on its way towards industrialization and the industry is the principal part of the Chinese economy. Industrial reform truly reflects China's entire transition experience; therefore, this paper emphasizes the structural reform in China's industry and assesses its affect on industrial development. Though scholars acknowledge the importance of structural change on industrial growth, very few researchers have tried to quantify the contribution to growth from restructuring the industrial structure and reallocating factors across sectors over time. To fill the gap, our study investigates the structural impact during the entire reform period (1980–2008) using the input and output panel of 38 two-digit industrial sectors in China. This differs from studies using aggregate data, which is unable to reveal the sectoral heterogeneity. We also do not choose the firm-level data due to its unavailability in the former two decades of reform period (1978–1998) and then its inability to capture the entire picture of Chinese industrial reform. To evaluate the factor allocation efficiency, we adopt the methodology developed by Battese and Coelli (1992) and Kumbhakar (2000) to estimate the sectoral stochastic frontier production function and decompose the measured total factor productivity (TFP). This technique differs from the shift-share analysis of decomposing the labor productivity or TFP, normally used in the studies of structural bonus such as Timmer and Szirmai (2000), Kumar and Russell (2002), Akkemik (2005) and some surveyed in Section 2.2. The paper is organized as below. The process of industrial structural reform since 1978 and industrial productivity estimates in China are briefly surveyed in Section 2. In Section 3 we explain the panel data analyzed in this paper and address the methodology. We report the pattern of estimated factor allocative efficiency (so-called structural bonus) in Section 4, and in Section 5 we discuss how structural change, the driving force of industrialization in China, influences factor allocative efficiency. We offer conclusions in Section 6.

This paper investigates the impact of structural reform on the performance of Chinese industry using a panel data set of 38 two-digit industrial sectors over the entire reform period between 1980 and 2008. We apply a stochastic frontier model and decomposition method to measure the changes in total factor productivity and its part due to factor reallocation across industrial sectors. We also use dynamic panel data model to analyze the determinants of structural bonus. We offer basic conclusions and their policy implications below. 1. Since the industrial development strategy converted from heavy-industry-oriented to the parallel importance of light and heavy industry reflecting the comparative advantages in 1978, China's industry has experienced spectacular growth and continuously increasing productivity. The higher than input factor rate of TFP growth after 1992 indicates that the growth model of Chinese industry seems to be transformed from being extensive to intensive. But this transformation is not stable or sustainable due to the decreasing contribution of productivity to output growth currently. 2. The factor inputs could affect industrial growth either directly through a volume effect, like capital accumulation, or indirectly through an efficiency effect that promotes productivity by reallocating the factors from less productive sectors to more productive ones. The growth accounting reveals that, on average, factor allocative efficiency plays a substantial role in industrial growth by pushing productivity upward. Technical progress and capital accumulation account for more industrial growth than FAEC, while labor inputs, technical efficiency and scale effect account for less. We find that the change of factor reallocative efficiency declined over time, especially after the new millenium. 3. The efficiency of factor reallocation results from the structural change since the industrial reform in 1978. Timmer and Szirmai (2000) refer to the positive efficiency effect as structural bonus. We also discover that the structural bonus did exist and matter in both the yeast and the mushroom processes of Chinese industrial transformation. Dynamic panel model regression suggests that the reforms of investment structure, ownership rights structure, size structure and foreign funded enterprises etc. in China significantly contributed to structural bonus at the former two stages, but also to the deterioration of the efficiency effect after 2001. The factors that drive the deterioration of allocative efficiency since 2001 and produce the difference of allocative efficiency between light and heavy industry highlight the future reform directions for Chinese industry. The most urgent reform is to continue the development of factor markets. In order to relieve the factor distortion and establish long-run sustainable industrialization, it is necessary to reform the dual-track resource allocation system, balance the investment structure, provide non-state enterprises equal access to resources, and develop non-state financial institutions, as suggested by Fung et al. (2006), Gong and Lin (2008), Li and Xia (2008), Qin and Song (2009), etc. Those sectors that are exploiting China's comparative advantage successfully should be supported and promoted. Because labor regulations do have a significantly negative bearing on long-run growth, as found by Calderon, Chong, and Leon (2007), the new labor contract law should be enforced more judiciously. The most challenging reform is to deepen the restructuring of state industry. Indeed, the speed of reforming its SOEs has distinguished China from other formerly centrally planned economies, and thus it has attracted much attention in the economics literature. Based on the negative correlation between state ownership and performance, many researchers recommend that the Chinese government should continue to divest the state ownership until it is a minority shareholder (Bai et al., 2009, Hovey and Naughton, 2007 and Wan and Yuce, 2007). This transfer of ownership is a promising path to long-term sustainable growth. Even if the government decides not to reduce the state to a minority shareholder, it can still improve allocative efficiency by lowering barriers of entry that currently privilege SOEs. In addition, the government could be more impartial in its treatment of NSEs. Only the fair market competitive environment can guarantee the efficient allocation of production materials and encourage state industrial enterprises to act as rational economic entities. The dilemma facing government is to develop market-orientated industry while at the same time coping with the possibility of high unemployment and consequent social unrest.