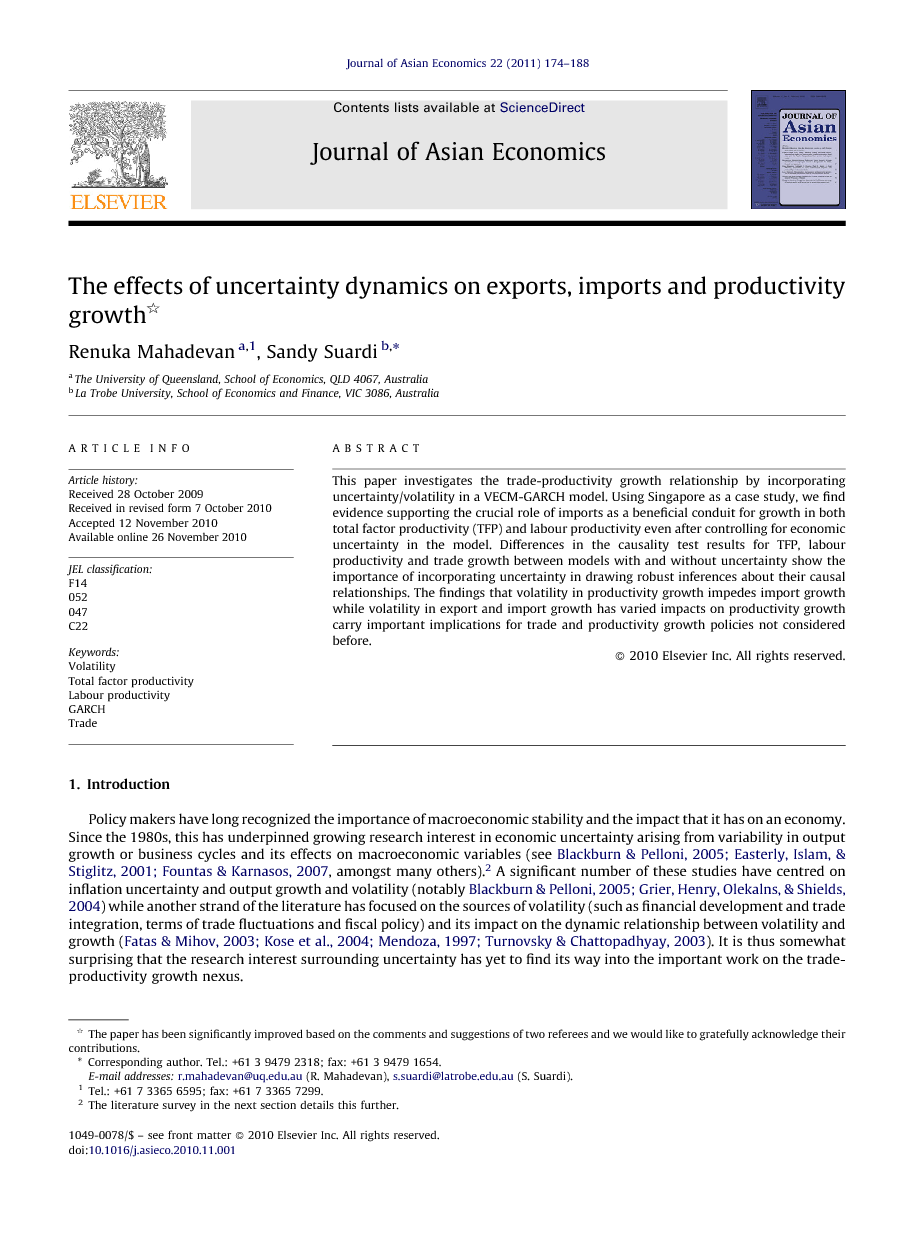 This paper presents the first attempt in examining the effects of uncertainty on the causal relationship between productivity and trade. The paper argues that there are good reasons for doing so and this is undertaken by modeling the impacts of uncertainty (measured by the volatility in all variables considered, namely exports, imports and productivity growth) on the trade-growth nexus in a dynamic framework. The empirical results show that uncertainty matters for drawing accurate inference about the causal relationships between TFP, labour productivity, and trade growth in a small, open economy. Bivariate VAR- and VEC-GARCH-M models were estimated to incorporate uncertainties surrounding trade and productivity growth and the effects are qualitatively and quantitatively analysed for both the short-run and long-run dynamics of productivity and trade growth. Considering the brevity of the sample size, the results of this paper are only tentative and should be interpreted with caution. In the case of Singapore, both sets of results, with and without uncertainty/volatility, support the import-led TFP growth hypothesis. An important result not previously shown in the literature is the impact of volatility of growth in exports, imports and productivity growth on each other. Relative to export growth volatility, import growth volatility exerted a greater negative influence on TFP growth but the reverse was true for labour productivity growth. However, the volatility in TFP growth hindered import growth more than the volatility in labour productivity growth. In addition, when uncertainty is accommodated in the model, TFP growth is found to promote import growth. Contrary to the results for TFP growth, there is evidence that labour productivity and trade growth are mutually causative. The relationship between them is robust even after controlling for uncertainty. The generalized impulse response functions indicate that a model incorporating uncertainty tend to show the effect of shocks lasted longer. These results are instructive for policy makers as imports provide a beneficial conduit for higher productivity growth even during volatile periods. The Singapore economy which has experienced modest TFP growth may potentially embark on a sustainable growth path by enhancing access to foreign technology through promoting better quality imports. It must however be conceded that the limitation of this paper lies in the lack of satisfactory explanations for the above observed links between TFP growth and import growth when considering volatility. This provides an avenue for extending the current work because at this stage, it is beyond the scope of this paper as this constitutes a different exercise of identifying a range of possible sources of volatility as well as controlling for various factors such as government spending, investment, and terms of trade amongst others, to provide a transmission mechanism via which the trade-growth nexus operates.