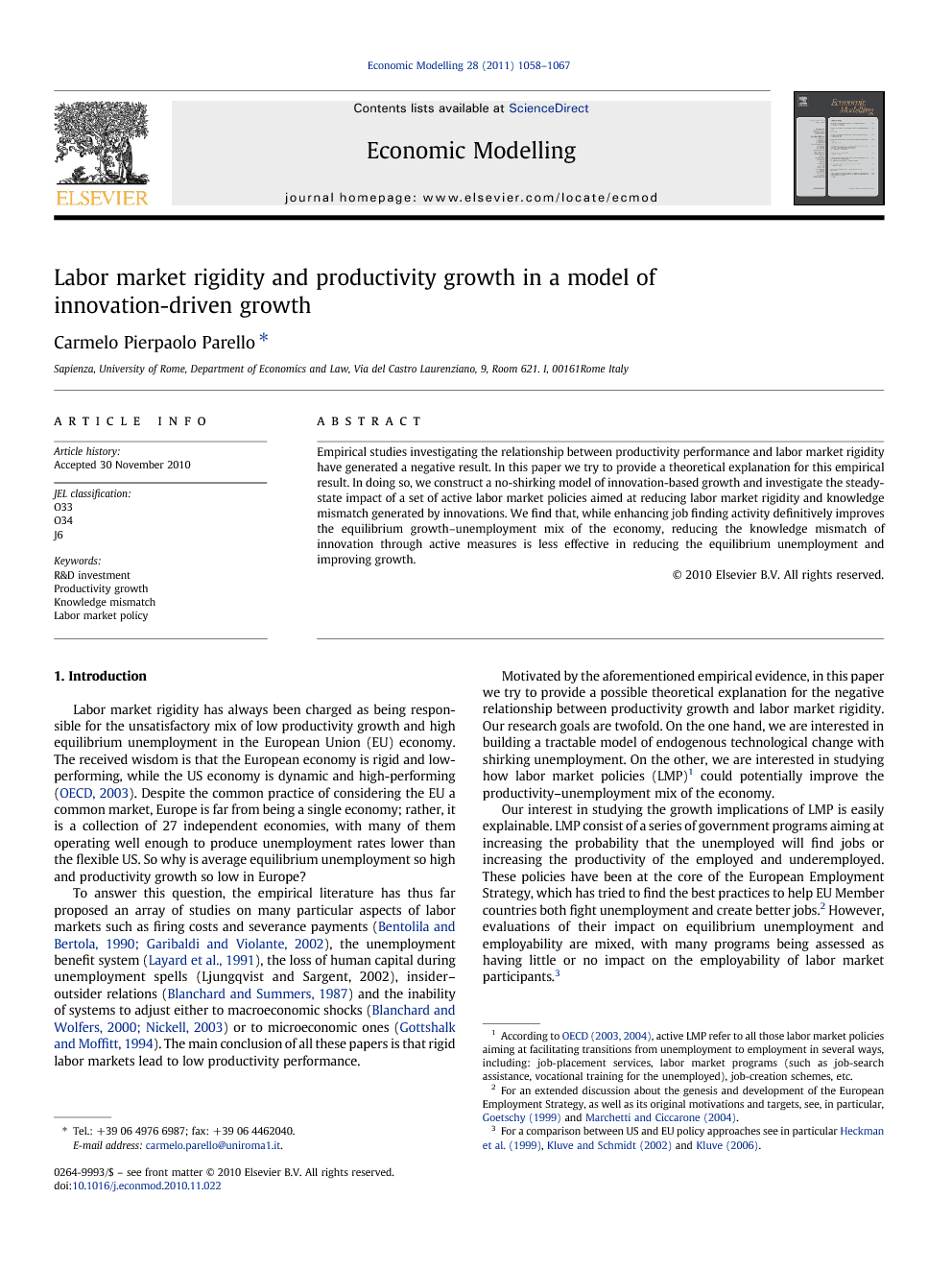 Empirical studies investigating the relationship between productivity performance and labor market rigidity have generated a negative result. In this paper we try to provide a theoretical explanation for this empirical result. In doing so, we construct a no-shirking model of innovation-based growth and investigate the steady-state impact of a set of active labor market policies aimed at reducing labor market rigidity and knowledge mismatch generated by innovations. We find that, while enhancing job finding activity definitively improves the equilibrium growth–unemployment mix of the economy, reducing the knowledge mismatch of innovation through active measures is less effective in reducing the equilibrium unemployment and improving growth.

Labor market rigidity has always been charged as being responsible for the unsatisfactory mix of low productivity growth and high equilibrium unemployment in the European Union (EU) economy. The received wisdom is that the European economy is rigid and low-performing, while the US economy is dynamic and high-performing (OECD, 2003). Despite the common practice of considering the EU a common market, Europe is far from being a single economy; rather, it is a collection of 27 independent economies, with many of them operating well enough to produce unemployment rates lower than the flexible US. So why is average equilibrium unemployment so high and productivity growth so low in Europe? To answer this question, the empirical literature has thus far proposed an array of studies on many particular aspects of labor markets such as firing costs and severance payments (Bentolila and Bertola, 1990 and Garibaldi and Violante, 2002), the unemployment benefit system (Layard et al., 1991), the loss of human capital during unemployment spells (Ljungqvist and Sargent, 2002), insider–outsider relations (Blanchard and Summers, 1987) and the inability of systems to adjust either to macroeconomic shocks (Blanchard and Wolfers, 2000 and Nickell, 2003) or to microeconomic ones (Gottshalk and Moffitt, 1994). The main conclusion of all these papers is that rigid labor markets lead to low productivity performance. Motivated by the aforementioned empirical evidence, in this paper we try to provide a possible theoretical explanation for the negative relationship between productivity growth and labor market rigidity. Our research goals are twofold. On the one hand, we are interested in building a tractable model of endogenous technological change with shirking unemployment. On the other, we are interested in studying how labor market policies (LMP)1 could potentially improve the productivity–unemployment mix of the economy. Our interest in studying the growth implications of LMP is easily explainable. LMP consist of a series of government programs aiming at increasing the probability that the unemployed will find jobs or increasing the productivity of the employed and underemployed. These policies have been at the core of the European Employment Strategy, which has tried to find the best practices to help EU Member countries both fight unemployment and create better jobs.2 However, evaluations of their impact on equilibrium unemployment and employability are mixed, with many programs being assessed as having little or no impact on the employability of labor market participants.3 This paper wants to explore such an ambiguous result from a theoretical point of view and extend the analysis to include the impact of LMP on innovation investment and productivity growth. Our model is a modified version of the Grossman and Helpman (1991) model of growth with creative destruction. To incorporate labor market rigidity into a growing economy, we introduce the efficiency wage scheme proposed by Shapiro and Stiglitz (1984) and make the two following assumptions. First, each time an innovation occurs, we assume that it generates a mismatch between the knowledge required by the new technology vintage and the level of knowledge embodied by the workers. Second, we assume that the probability that an unemployed worker could find a new job in the next period is lower than one and depends on an endogenous job-finding rate. Specifically, we assume that, once in the unemployment spell, the probability that a worker can find a new job depends on both an exogenous term reflecting the condition of the labor market and an endogenous term linked to the innovation intensity of the economy. The model is solved for the steady state and exploited to study the long-run effects of LMP on productivity growth and equilibrium unemployment. We find that improving the performance of the labor market slightly increases the steady-state rate of innovation in the economy and decreases the equilibrium rate of unemployment. In order to assess which LMP is more suitable to improve the productivity–unemployment mix of the economy, in the final part of the paper we calibrate the model for the steady state equilibrium and find that focusing on LMP that affect the workers' job searching activity (for example, LMP services such as active job-search workshops, social and vocational orientation services, etc.) is more effective in reducing the equilibrium unemployment than focusing on LMP that reduce the knowledge mismatch generated by innovation (for example, active measures such as training, integration contracts, etc.). Our simulations also show that both policies slightly modify income distribution in favor of wage income. Thus far, the most fundamental papers on growth and unemployment have been mainly based on Pissarides'(1990) standard search models. To the best of our knowledge, this paper is the first contribution that tries to study the issue of growth and LMP in the presence of shirking unemployment.4 The outline of the paper is the following. Section 2 sets up the model by describing the case of a Schumpeterian growth model with a rigid labor market. Section 3 describes the steady-state equilibrium of the model. Section 4 studies the impact of a labor market policy aimed at reducing market rigidities, while Section 5 provides a numerical calibration in search of the more effective policy. Finally, Section 6 concludes.

In this paper, we have studied the steady-state impact of LMP on long-run growth. In doing so, we have built a scale-invariant, innovation-based growth model with efficiency-wages in the spirit of Shapiro and Stiglitz (1984), where both innovation and unemployment rates are endogenously determined. From a positive point of view, the model generates a negative relationship between labor market rigidity and productivity growth. From the policy point of view, the model shows how LMP can increase manufacturing employment and spur long-run productivity growth. In particular, we have found that LMP slightly increase the steady-state rate of innovation, decrease the equilibrium unemployment rate and increase the steady-state share of manufacturing in total employment. In order to find out what policy is more effective in improving the productivity–employment mix, in an extension of the model we have performed a numerical analysis by calibrating our dynamic model. We have found that strengthening labor market services is more effective in reducing unemployment than contrasting the technology mismatch generated by innovation, while both policies have responded in the same way in enhancing innovation and growth.