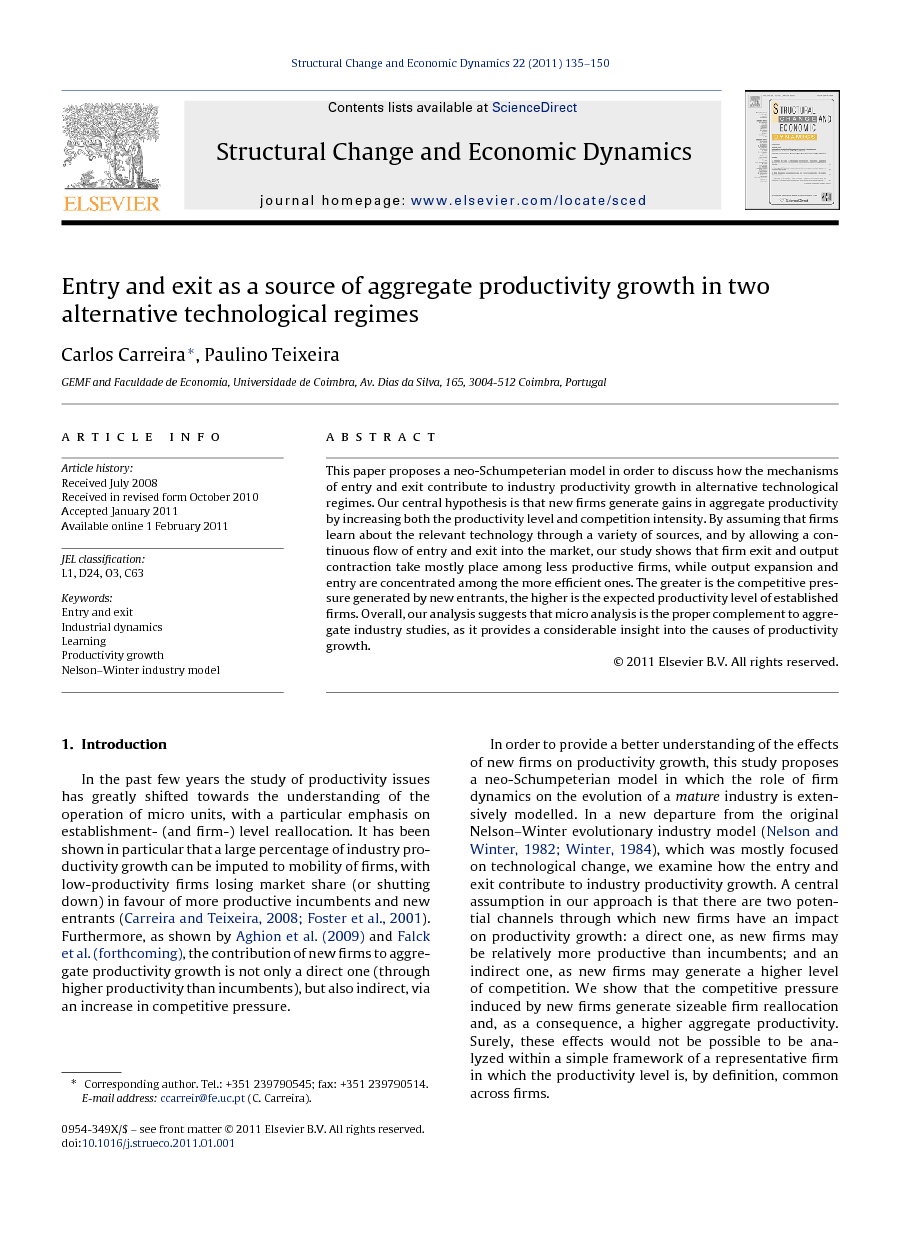 This paper proposes a neo-Schumpeterian model in order to discuss how the mechanisms of entry and exit contribute to industry productivity growth in alternative technological regimes. Our central hypothesis is that new firms generate gains in aggregate productivity by increasing both the productivity level and competition intensity. By assuming that firms learn about the relevant technology through a variety of sources, and by allowing a continuous flow of entry and exit into the market, our study shows that firm exit and output contraction take mostly place among less productive firms, while output expansion and entry are concentrated among the more efficient ones. The greater is the competitive pressure generated by new entrants, the higher is the expected productivity level of established firms. Overall, our analysis suggests that micro analysis is the proper complement to aggregate industry studies, as it provides a considerable insight into the causes of productivity growth.

In the past few years the study of productivity issues has greatly shifted towards the understanding of the operation of micro units, with a particular emphasis on establishment- (and firm-) level reallocation. It has been shown in particular that a large percentage of industry productivity growth can be imputed to mobility of firms, with low-productivity firms losing market share (or shutting down) in favour of more productive incumbents and new entrants (Carreira and Teixeira, 2008 and Foster et al., 2001). Furthermore, as shown by Aghion et al. (2009) and Falck et al. (forthcoming), the contribution of new firms to aggregate productivity growth is not only a direct one (through higher productivity than incumbents), but also indirect, via an increase in competitive pressure. In order to provide a better understanding of the effects of new firms on productivity growth, this study proposes a neo-Schumpeterian model in which the role of firm dynamics on the evolution of a mature industry is extensively modelled. In a new departure from the original Nelson–Winter evolutionary industry model ( Nelson and Winter, 1982 and Winter, 1984), which was mostly focused on technological change, we examine how the entry and exit contribute to industry productivity growth. A central assumption in our approach is that there are two potential channels through which new firms have an impact on productivity growth: a direct one, as new firms may be relatively more productive than incumbents; and an indirect one, as new firms may generate a higher level of competition. We show that the competitive pressure induced by new firms generate sizeable firm reallocation and, as a consequence, a higher aggregate productivity. Surely, these effects would not be possible to be analyzed within a simple framework of a representative firm in which the productivity level is, by definition, common across firms. Another key aspect of our modelling is the full characterization of the technological regime in which firms operate.1 As in Winter (1984), two basic cases are considered: the ‘routinized regime’ and the ‘entrepreneurial regime’. Analytically, the difference between these two regimes is modelled via two main aspects: (a) innovative draws, which are based on firm's current productivity level—in the routinized regime—or as a function of industry's average productivity—in the entrepreneurial regime; and (b) entry and exit, with entry rates being set at a lower level in the routinized than in the entrepreneurial regime, and the productivity level of entrants based on the industry average—in the routinized regime—or on the industry's best practice—in the entrepreneurial regime. Empirically, the distinction between the two regimes has been confirmed by Malerba and Orsenigo (1996), for example, who, using patent data of six countries (US, Japan, Germany, France, the UK, and Italy), found that 19 out of 49 technological classes show patterns of entrepreneurial regime, while 15 out of 49 can be characterised as routinized regime (see also Breschi et al., 2000 and Malerba and Orsenigo, 1995). We develop a competitive dynamic setting of a mature industry (in a developed market economy) in which we have a continuing flow of heterogeneous firm entry and exit. Following the taxonomy proposed by Malerba (1992), firms can learn through ‘learning by doing’ and ‘learning by using’, on the one hand, and ‘learning by searching’ and ‘learning from external sources’, on the other. Moreover, as in Nelson and Winter (1982), firms compete with a homogeneous product through costs reduction, which is achieved through productivity improvements. In other words, in our modelling firms are focused on process innovation. Alternatively, one can think in terms of product innovation in which single-product firms compete through (vertical) product differentiation—assuming that one unit of the product contains a given amount of the single Lancasterian characteristic. 2 In order to analyse the main properties of the model, we first introduce a non-stochastic version with no learning. Then, we discuss how the numerical results fit some key stylized facts and how the entry contributes to industry productivity growth. Our findings show that exit and output contraction take mostly place among less productive firms, while entry and expansion are concentrated among high-productivity firms. Moreover, much of the market share variation can be connected to higher competitive pressure brought in by new firms which force the least productive firms to exit. We also find that a higher entry rate of new firms is positively associated with a higher productivity level of incumbent firms.

This paper examines industry dynamics as a source of industry productivity growth in two alternative technological regimes. It was assumed that new firms generate gains in the aggregate productivity through increased productivity and competitive pressure. Our evolutionary approach assumes that individual firms learn about technology through a variety of sources, and that, as a consequence, productivity growth and market shares across firms can be quite distinct. Aggregate productivity growth in this framework is thus determined by the micro productivity patterns associated with different technological regimes, on the one hand, and the ease of entry/exit, on the other. Our numerical simulations do replicate key empirical regularities already reported in literature. In particular, they show that firm mobility has a strong impact on industry productivity growth: firms that gain market share are the ones among the most productive lot, while continuing firms with decreasing market shares are in the bottom half of the distribution in terms of efficiency; exiting firms also tend to be replaced by more productive firms. It is therefore very clear that firm dynamics do matter both in terms of micro and aggregate productivity growth. Further, new firms play a key role in this dynamic process not only because they replace less productive units, but also because they generate a higher degree of overall market competition. On the whole, our results suggest that micro analysis is the proper complement to aggregate industry studies, as it provides a considerable insight into the causes of productivity growth. As to the policy implications of our analysis are concerned, the lesson seems to be quite straightforward: it claims for the promotion of an institutional environment more favourable to resource reallocation through entry and exit of firms in order to achieve a higher rate of production efficiency.