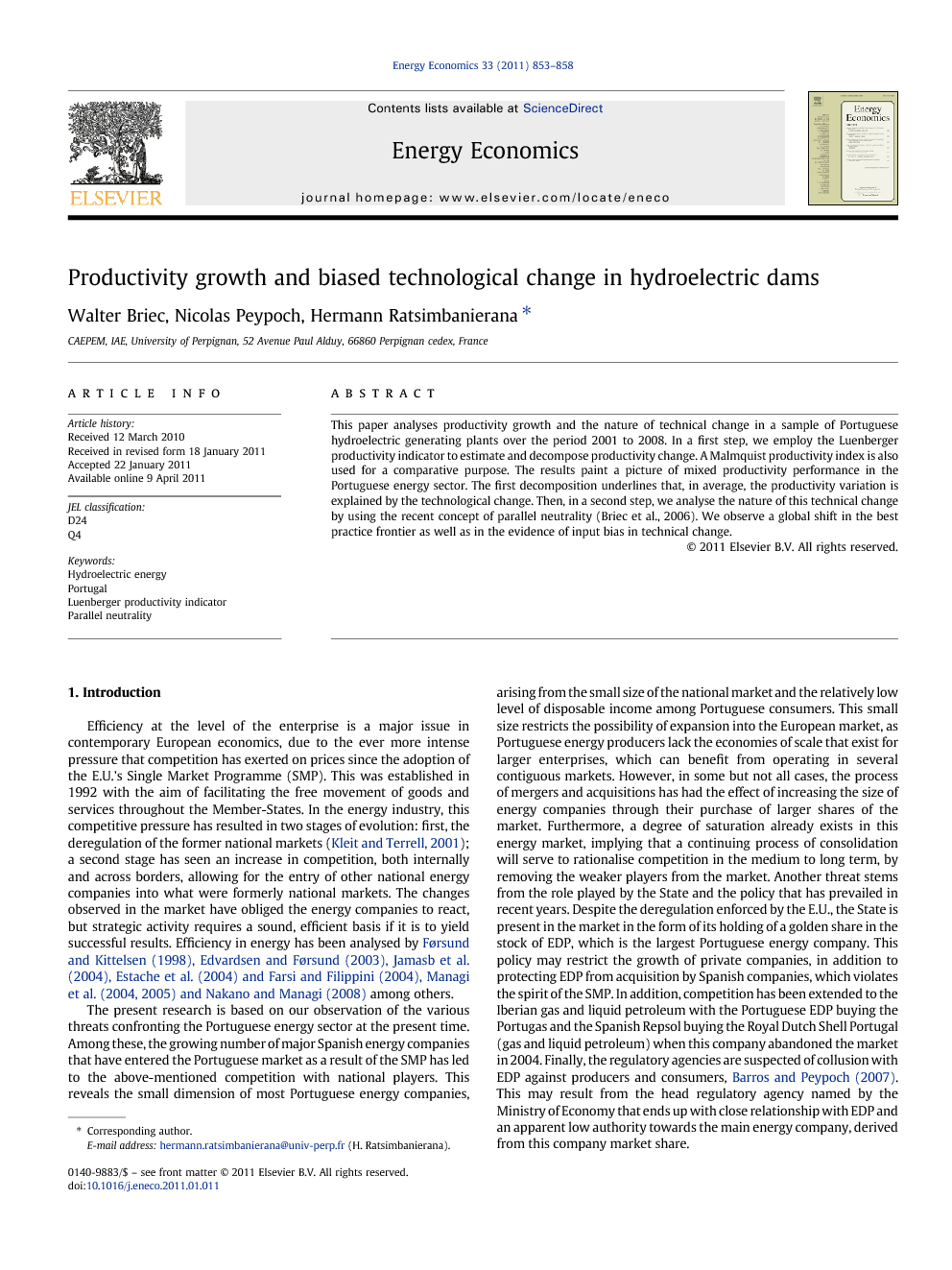 Efficiency at the level of the enterprise is a major issue in contemporary European economics, due to the ever more intense pressure that competition has exerted on prices since the adoption of the E.U.'s Single Market Programme (SMP). This was established in 1992 with the aim of facilitating the free movement of goods and services throughout the Member-States. In the energy industry, this competitive pressure has resulted in two stages of evolution: first, the deregulation of the former national markets (Kleit and Terrell, 2001); a second stage has seen an increase in competition, both internally and across borders, allowing for the entry of other national energy companies into what were formerly national markets. The changes observed in the market have obliged the energy companies to react, but strategic activity requires a sound, efficient basis if it is to yield successful results. Efficiency in energy has been analysed by Førsund and Kittelsen, 1998, Edvardsen and Førsund, 2003, Jamasb et al., 2004, Estache et al., 2004, Farsi and Filippini, 2004, Managi et al., 2004, Managi et al., 2005 and Nakano and Managi, 2008 among others. The present research is based on our observation of the various threats confronting the Portuguese energy sector at the present time. Among these, the growing number of major Spanish energy companies that have entered the Portuguese market as a result of the SMP has led to the above-mentioned competition with national players. This reveals the small dimension of most Portuguese energy companies, arising from the small size of the national market and the relatively low level of disposable income among Portuguese consumers. This small size restricts the possibility of expansion into the European market, as Portuguese energy producers lack the economies of scale that exist for larger enterprises, which can benefit from operating in several contiguous markets. However, in some but not all cases, the process of mergers and acquisitions has had the effect of increasing the size of energy companies through their purchase of larger shares of the market. Furthermore, a degree of saturation already exists in this energy market, implying that a continuing process of consolidation will serve to rationalise competition in the medium to long term, by removing the weaker players from the market. Another threat stems from the role played by the State and the policy that has prevailed in recent years. Despite the deregulation enforced by the E.U., the State is present in the market in the form of its holding of a golden share in the stock of EDP, which is the largest Portuguese energy company. This policy may restrict the growth of private companies, in addition to protecting EDP from acquisition by Spanish companies, which violates the spirit of the SMP. In addition, competition has been extended to the Iberian gas and liquid petroleum with the Portuguese EDP buying the Portugas and the Spanish Repsol buying the Royal Dutch Shell Portugal (gas and liquid petroleum) when this company abandoned the market in 2004. Finally, the regulatory agencies are suspected of collusion with EDP against producers and consumers, Barros and Peypoch (2007). This may result from the head regulatory agency named by the Ministry of Economy that ends up with close relationship with EDP and an apparent low authority towards the main energy company, derived from this company market share. This paper aims to analyse the efficiency of EDP Hydroelectric generating plants1 within a new and original procedure. The directional distance function and the Luenberger productivity indicator are used to identify the efficient and productivity scores of each unit analysed. This investigation stems from a research carried out into an industry's best practices, based on the idea that the widespread application of these can lead to improved performance throughout the whole industry overcoming the above threats (Färe et al., 1983, Färe et al., 1985, Atkinson and Halvorsen, 1986 and Pollitt, 1996). A survey of the existing literature can be found in Barros (2008). The paper is organised as follows: in Section 2, we explain the theoretical framework supporting the model used; in Section 3, we present the data and results; and finally, Section 4 is devoted to the discussion and conclusion.

The general conclusion is that based in the Luenberger productivity indicator, there is room for the hydroelectric companies to improve their productivity in the period in order to upgrade their performance toward the frontier of best practices. This situation applies to plants in which the improvement in technical efficiency co-exists with the deterioration in technological change and plants in which the improvement in technological change co-exists with the deterioration of technical efficiency. These results signify that there is room for inefficient hydroelectric Portuguese plants to adjust to the industry best practice frontier. How do we explain these results? The approaches based on DEA do not explain the causes of efficiency, and only identify the inefficient plants and slacks on inputs and outputs (Talluri, 2000). Assuming that management is relatively homogenous among different hydroelectric plants, what differentiate it is the rainy conditions on the geographical area they are located, a result that is validated by the plants in the northern rainy region of Cávado-Lima displaying higher productivity change. Furthermore, age may play a role in efficiency, since older plants may be less efficient in transforming water in energy (Barros, 2008). From the application of the technical change decomposition, there appears to have been a global shift in the best practice frontier, and this is the overall driver of technical change. The input bias identified signifies that a minor part of EDP hydroelectric plants substituted labour by capital in the period, a policy that could contribute to productivity improvement. This implies that technical change has affected the marginal rate of substitution between hydro plant inputs. For those plants, the production technology is not Hicks neutral. Therefore it is concluded that the technological bias enables the identification of the technological changes in the output, inputs and magnitude of technological change permitting a clear view of technical change and the clarification of dynamics of efficiency change (Weber and Domazlicky, 1999, Färe et al., 2001 and Managi and Karemera, 2004).