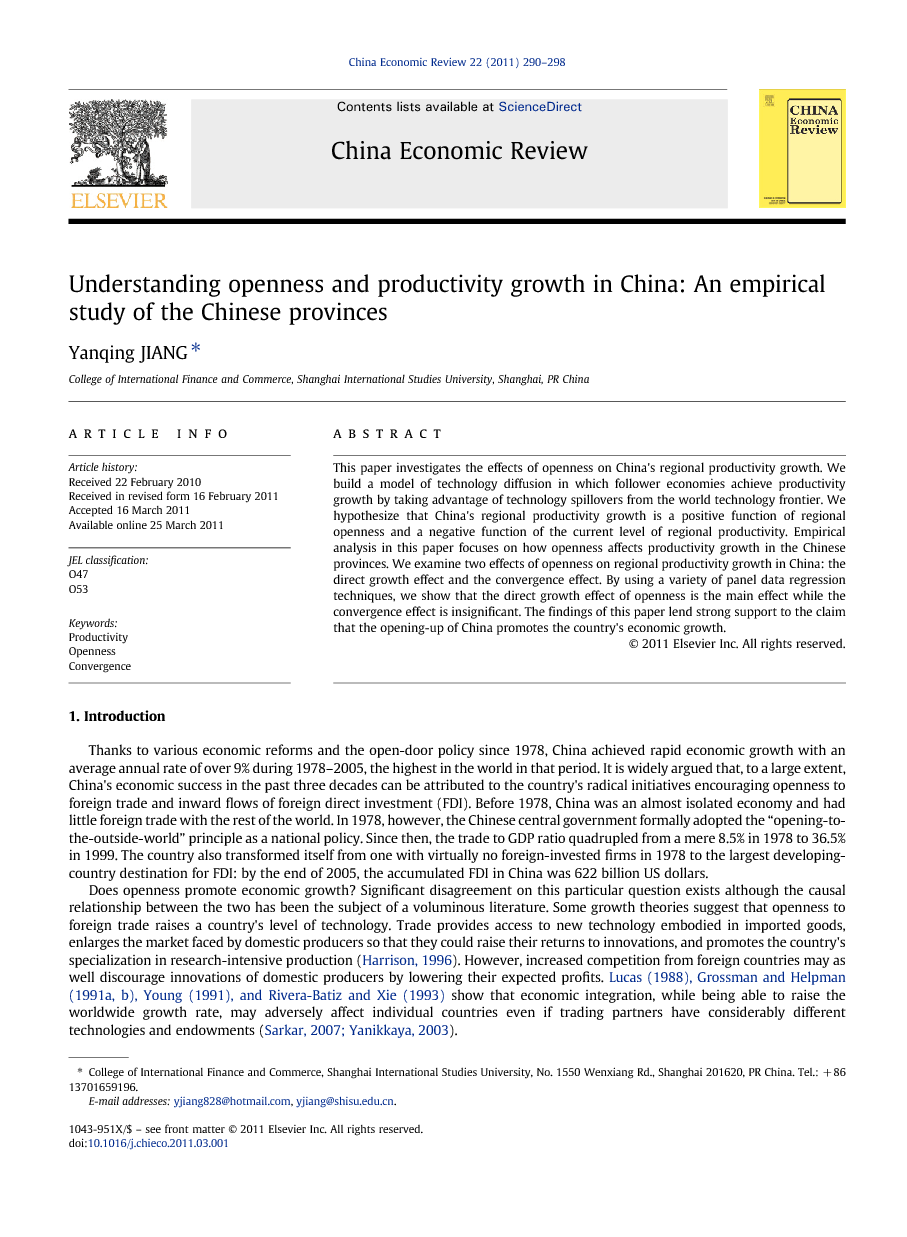 Thanks to various economic reforms and the open-door policy since 1978, China achieved rapid economic growth with an average annual rate of over 9% during 1978–2005, the highest in the world in that period. It is widely argued that, to a large extent, China's economic success in the past three decades can be attributed to the country's radical initiatives encouraging openness to foreign trade and inward flows of foreign direct investment (FDI). Before 1978, China was an almost isolated economy and had little foreign trade with the rest of the world. In 1978, however, the Chinese central government formally adopted the “opening-to-the-outside-world” principle as a national policy. Since then, the trade to GDP ratio quadrupled from a mere 8.5% in 1978 to 36.5% in 1999. The country also transformed itself from one with virtually no foreign-invested firms in 1978 to the largest developing-country destination for FDI: by the end of 2005, the accumulated FDI in China was 622 billion US dollars. Does openness promote economic growth? Significant disagreement on this particular question exists although the causal relationship between the two has been the subject of a voluminous literature. Some growth theories suggest that openness to foreign trade raises a country's level of technology. Trade provides access to new technology embodied in imported goods, enlarges the market faced by domestic producers so that they could raise their returns to innovations, and promotes the country's specialization in research-intensive production (Harrison, 1996). However, increased competition from foreign countries may as well discourage innovations of domestic producers by lowering their expected profits. Lucas, 1988, Grossman and Helpman, 1991a, Grossman and Helpman, 1991b, Young, 1991 and Rivera-Batiz and Xie, 1993 show that economic integration, while being able to raise the worldwide growth rate, may adversely affect individual countries even if trading partners have considerably different technologies and endowments (Sarkar, 2007 and Yanikkaya, 2003). Since the early 1980s, through a controlled effort to open up the economy selectively to trade and FDI, China has gradually transformed itself into a major trading nation and FDI recipient in the world. However, the degree of participation in foreign trade varies greatly from one province to another. FDI inflows are also highly unevenly distributed across provinces. In this paper, we take advantage of the large cross-province variation in the degree of openness to investigate its effects on productivity growth (and hence on income growth) across the Chinese provinces. We are interested in how openness affects productivity growth in different regions in China. As will be illustrated by the model of this paper, there are two potential channels through which regional openness may affect regional productivity growth in China. First, openness may have a direct growth effect on China's regional productivity. According to our model, this effect is not associated with the size of the productivity gap between a Chinese region and the world technology frontier. This is an effect of openness that is not directly related to the speed of technology convergence across the Chinese regions. In other words, this effect is a general growth effect of openness on regional productivity that does not directly involve the catch-up tendency of backward regions driven by openness. Second, openness may have a catch-up effect on regional productivity for backward regions. Openness exerts this catch-up effect (or convergence effect) by increasing the speed of productivity (technology) convergence across different regions in China. Productivity growth related to this effect of openness is dependent on the technology gap between a Chinese region and the world technology frontier. Our empirical results in this paper show that the first effect above is the main channel through which openness affects productivity growth across different regions in China while the second effect is insignificant. The rest of this paper is organized as follows. In Section 2, we calculate levels of productivity for the Chinese provinces and provide a discussion of cross-province differences in productivity. Our levels accounting and decomposition exercise in this section shows that cross-province differences in growth rates of per worker output are mainly driven by the differences in productivity growth rates across the Chinese provinces. In Section 3, we present our theoretical model on which our subsequent empirical analysis will be based. This theoretical model explicitly distinguishes two different channels through which openness may affect regional productivity. In Section 4, we carry out our econometric analysis and present regression results. Our results show that the direct growth effect of openness is the main effect while the convergence effect of openness is insignificant. In Section 5, we check the robustness of our estimation results, and finally, Section 6 concludes.