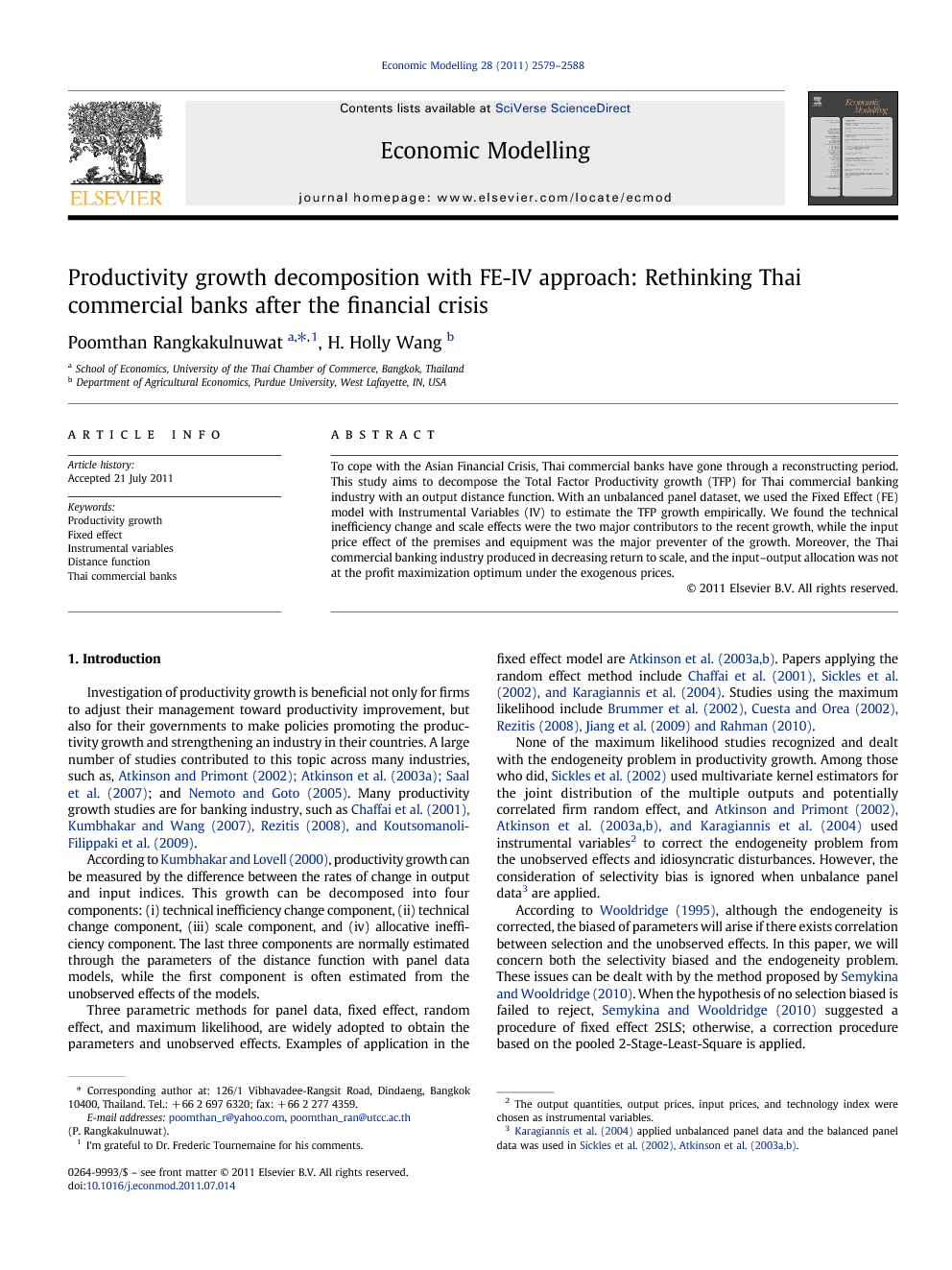 To cope with the Asian Financial Crisis, Thai commercial banks have gone through a reconstructing period. This study aims to decompose the Total Factor Productivity growth (TFP) for Thai commercial banking industry with an output distance function. With an unbalanced panel dataset, we used the Fixed Effect (FE) model with Instrumental Variables (IV) to estimate the TFP growth empirically. We found the technical inefficiency change and scale effects were the two major contributors to the recent growth, while the input price effect of the premises and equipment was the major preventer of the growth. Moreover, the Thai commercial banking industry produced in decreasing return to scale, and the input–output allocation was not at the profit maximization optimum under the exogenous prices.

Investigation of productivity growth is beneficial not only for firms to adjust their management toward productivity improvement, but also for their governments to make policies promoting the productivity growth and strengthening an industry in their countries. A large number of studies contributed to this topic across many industries, such as, Atkinson and Primont, 2002, Atkinson et al., 2003a and Saal et al., 2007; and Nemoto and Goto (2005). Many productivity growth studies are for banking industry, such as Chaffai et al., 2001, Kumbhakar and Wang, 2007, Rezitis, 2008 and Koutsomanoli-Filippaki et al., 2009. According to Kumbhakar and Lovell (2000), productivity growth can be measured by the difference between the rates of change in output and input indices. This growth can be decomposed into four components: (i) technical inefficiency change component, (ii) technical change component, (iii) scale component, and (iv) allocative inefficiency component. The last three components are normally estimated through the parameters of the distance function with panel data models, while the first component is often estimated from the unobserved effects of the models. Three parametric methods for panel data, fixed effect, random effect, and maximum likelihood, are widely adopted to obtain the parameters and unobserved effects. Examples of application in the fixed effect model are Atkinson et al., 2003a and Atkinson et al., 2003b. Papers applying the random effect method include Chaffai et al., 2001, Sickles et al., 2002 and Karagiannis et al., 2004. Studies using the maximum likelihood include Brummer et al., 2002, Cuesta and Orea, 2002, Rezitis, 2008, Jiang et al., 2009 and Rahman, 2010. None of the maximum likelihood studies recognized and dealt with the endogeneity problem in productivity growth. Among those who did, Sickles et al. (2002) used multivariate kernel estimators for the joint distribution of the multiple outputs and potentially correlated firm random effect, and Atkinson and Primont, 2002, Atkinson et al., 2003a, Atkinson et al., 2003b and Karagiannis et al., 2004 used instrumental variables2 to correct the endogeneity problem from the unobserved effects and idiosyncratic disturbances. However, the consideration of selectivity bias is ignored when unbalance panel data3 are applied. According to Wooldridge (1995), although the endogeneity is corrected, the biased of parameters will arise if there exists correlation between selection and the unobserved effects. In this paper, we will concern both the selectivity biased and the endogeneity problem. These issues can be dealt with by the method proposed by Semykina and Wooldridge (2010). When the hypothesis of no selection biased is failed to reject, Semykina and Wooldridge (2010) suggested a procedure of fixed effect 2SLS; otherwise, a correction procedure based on the pooled 2-Stage-Least-Square is applied. This paper tries to apply the FE-IV method with consideration of selectivity bias to investigate banking productivity growth. Thailand banking industry is selected as a case study. After the Asian financial crisis in 1997, the industry has been reinforced especially in upgrading the regulatory and supervisory to the banking industry through the Thailand's Financial Sector Master Plan (FSMP) which has been implemented since 2004. We segment the banks into three groups: large size, middle size, and small size. The effectiveness of the plan to each size will be evaluated by decomposing the productivity growth of the industry. The selected unbalanced panel data of 14 Thai commercial banks is adopted. The parameters from the distance function are estimated in accompany with allowing explanatory variables correlate to unobserved effects and idiosyncratic error. The remainder of this paper is as follows. Section 2 presents the literature reviews on measuring of banking performance. Section 3 presents the model and the estimation method. Section 4 presents the background of the Thai banking industry and data. Section 5 presents the results and Section 6 concludes.

This research decomposed TFP growth of Thai commercial banking industry using unbalanced panel data during the decade of the Asian Financial Crisis in 1997 and the Global Financial Crisis in 2008. In the meantime, FSMP Phase 1 was adopted From 2004 to 2008. The output distance function was estimated by FE-IV to extract the components of TFP growth into the changes in technical inefficiency effect, technical change effect, scale effect, and allocative effect (inputs and outputs price change effects). We found that there is no selectivity bias in the data applied to the output distance function. Hence, the results can imply for the whole Thai banking industry. The results indicated that, after the implementation of FSMP Phase 1 in 2004, Thai banking industry experienced an improvement of the technical inefficiency change effect, scale effect, and output price effect. This indicates the success of implementation of the FSMP Phase 1, which aimed to enhance efficiency and economy of scale. However, the plan did not contribute to technical progress effect and input price effect. Although the scale effect was improved, it was the major cause of worsening in the productivity of Thai banking industry. That is, the policies in the next period should continue to focus on the improvement of economy of scales. Moreover, our results suggest that the policies of technology progress should be more concerned; otherwise the productivity might be destroyed by technical regress. In this paper, we segmented the banking industry into three groups: large, medium, and small sizes. We found that the technical inefficiency change effects of small banks were not stable comparing to the large and medium ones. This might be the results of FSMP Phase 1 which induced qualified Trust and Credit Foncier companies to improve their status to commercial banks. The productivity growth of the small banks was extremely worsened by the negative impact of input price effect, while that of the large and medium banks was mostly enhanced by this effect. This implies that remuneration for inputs in large and medium banks induced more efficient inputs than that in small banks. On the other hand, the productivity growth of the small banks was primarily improved by the positive impact of scale effect, while that of the large and medium banks was significantly worsened by this effect. That is, to achieve higher outputs, the small banks might increase its inputs, while the large and medium banks should not extend their inputs.