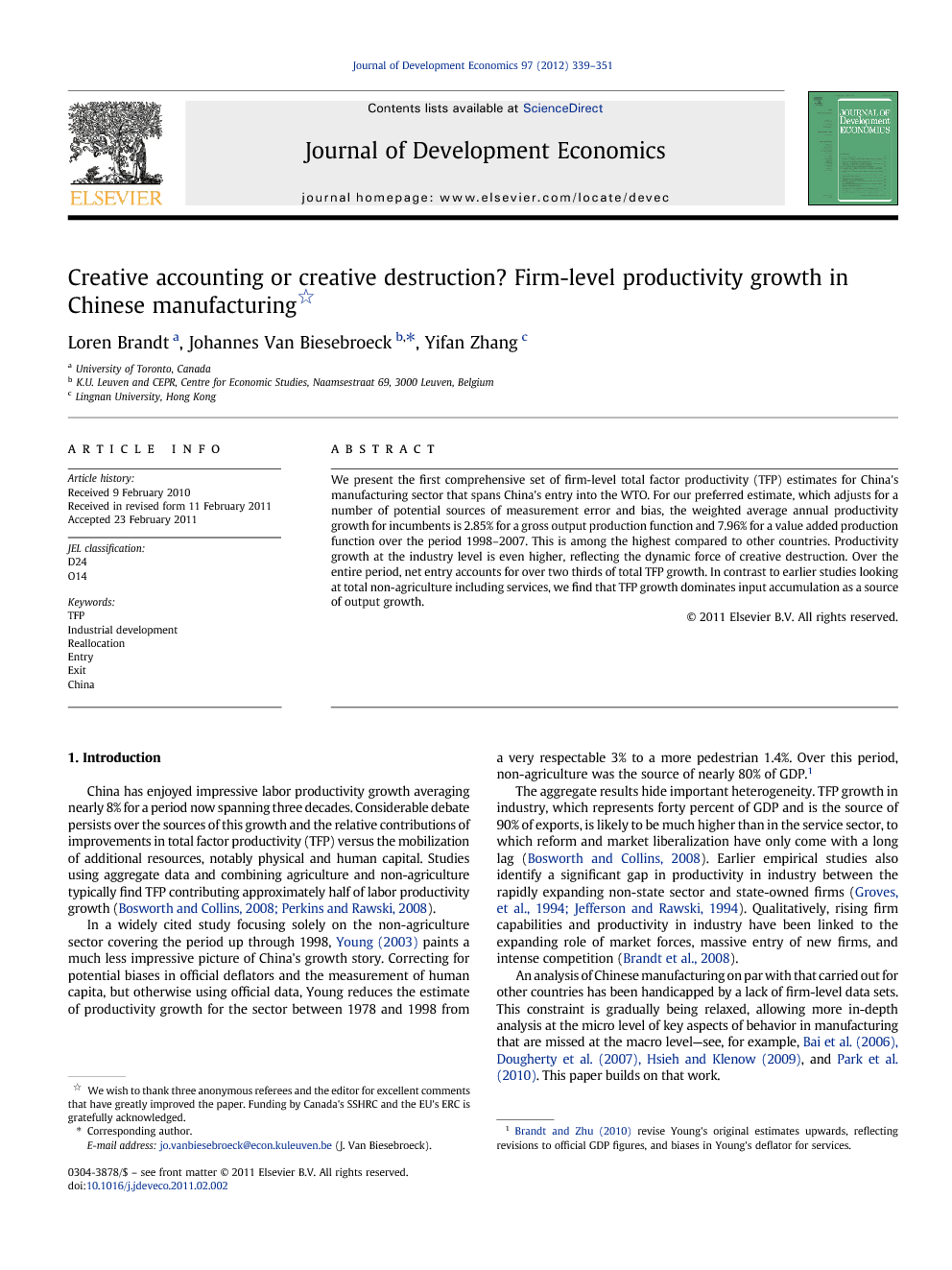 We present the first comprehensive set of firm-level total factor productivity (TFP) estimates for China's manufacturing sector that spans China's entry into the WTO. For our preferred estimate, which adjusts for a number of potential sources of measurement error and bias, the weighted average annual productivity growth for incumbents is 2.85% for a gross output production function and 7.96% for a value added production function over the period 1998–2007. This is among the highest compared to other countries. Productivity growth at the industry level is even higher, reflecting the dynamic force of creative destruction. Over the entire period, net entry accounts for over two thirds of total TFP growth. In contrast to earlier studies looking at total non-agriculture including services, we find that TFP growth dominates input accumulation as a source of output growth.

rawing on an unbalanced panel of firms that covers most of China's manufacturing sector, the purpose of this paper has been to examine the absolute size and the dynamics of productivity growth over a period that spans China's entry into the WTO. In our analysis, we have been especially attentive to a host of data and methodological issues. By all indications, productivity growth has been very rapid, a finding that appears to be robust to a host of measurement issues. This finding is in sharp contrast to alternative perspectives such as Young's (2003) that suggest modest productivity growth outside of agriculture. Improvements in productivity of “continuing firms”, either as a result of restructuring efforts, or investments in capability building are an important part of the picture. Equally, if not more important, are the gains to creative destruction, i.e. entry and exit, that China's decentralized reforms have increasingly allowed. For our preferred estimate, the weighted average annual productivity growth for incumbents is 2.85% for a gross output production function and 7.96% for a value added production function over the period 1998–2007. This is among the highest compared to other countries. Productivity growth at the industry level is even higher, reflecting the dynamic force of creative destruction. Over the entire period, net entry accounts for over two-thirds of total TFP growth, with growth of entrants after entry making an important contribution to this. In all, TFP growth dominates input accumulation as a source of output growth and is responsible for two thirds of labor productivity growth. These findings have important implications, not in the least for government policy. First, even with declining opportunities for growth through accumulation of additional inputs, the high TFP growth estimates suggest that we can expect robust growth in manufacturing in the near future. Moreover, TFP growth will help to maintain profitability in the sector in the face of rising labor and other input costs. Second, increasing competitive pressure and the absorption of foreign technology are often mentioned as drivers of TFP growth. Learning on the part of continuing firms as well as new entrants is critical to taking advantage of these sources of growth. For entrants, there are two dimensions to learning: first, identifying new opportunities that allow successful entry; and second, improvements in productivity subsequent to entry. Policies that facilitate learning among both kinds of firms are the key to sustained growth in the medium term. As Chinese firms narrow the technology gap with advanced countries, more of the learning will have to come from within firms. Third, despite the dynamism we document, our results also point to continued constraints on the growth of some of the most productive of firms. Problems in the allocation of credit and biases in favor of larger firms with state-sector connections are potential reasons for this. With growth prospects on the extensive margin limited, new reforms to enhance efficient resource allocation still provide important growth potential. A policy of liberalizing entry and facilitating exit has already played an important role in reallocating resources to new firms. Constraints that sustain the remaining productivity differences among existing firms, including between the state and non-state sectors, will have to be tackled next. More work is needed to identify the exact nature of the constraints impeding reallocation, and how they can be best removed.