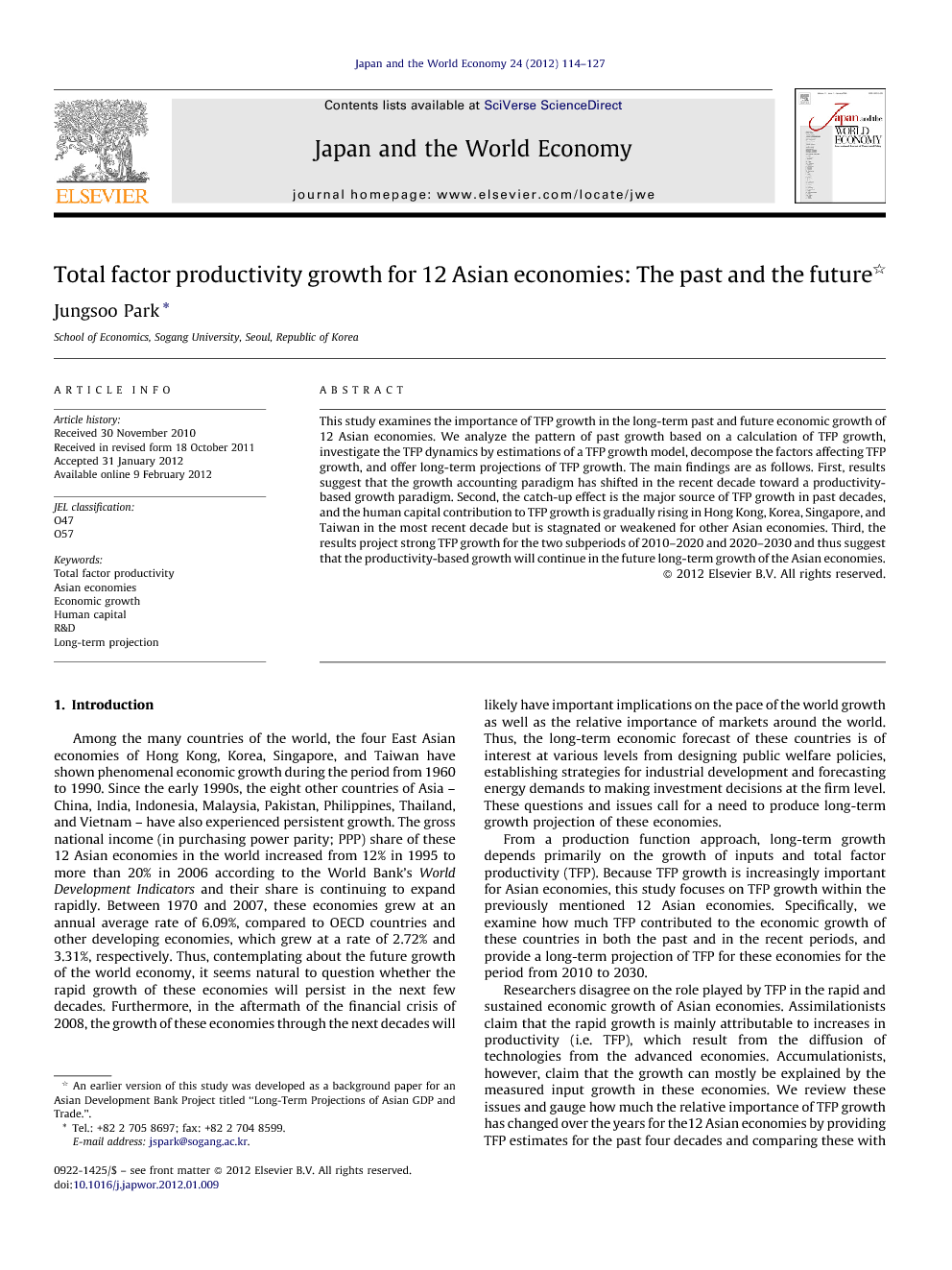 This study examines the importance of TFP growth in the long-term past and future economic growth of 12 Asian economies. We analyze the pattern of past growth based on a calculation of TFP growth, investigate the TFP dynamics by estimations of a TFP growth model, decompose the factors affecting TFP growth, and offer long-term projections of TFP growth. The main findings are as follows. First, results suggest that the growth accounting paradigm has shifted in the recent decade toward a productivity-based growth paradigm. Second, the catch-up effect is the major source of TFP growth in past decades, and the human capital contribution to TFP growth is gradually rising in Hong Kong, Korea, Singapore, and Taiwan in the most recent decade but is stagnated or weakened for other Asian economies. Third, the results project strong TFP growth for the two subperiods of 2010–2020 and 2020–2030 and thus suggest that the productivity-based growth will continue in the future long-term growth of the Asian economies.

Among the many countries of the world, the four East Asian economies of Hong Kong, Korea, Singapore, and Taiwan have shown phenomenal economic growth during the period from 1960 to 1990. Since the early 1990s, the eight other countries of Asia – China, India, Indonesia, Malaysia, Pakistan, Philippines, Thailand, and Vietnam – have also experienced persistent growth. The gross national income (in purchasing power parity; PPP) share of these 12 Asian economies in the world increased from 12% in 1995 to more than 20% in 2006 according to the World Bank's World Development Indicators and their share is continuing to expand rapidly. Between 1970 and 2007, these economies grew at an annual average rate of 6.09%, compared to OECD countries and other developing economies, which grew at a rate of 2.72% and 3.31%, respectively. Thus, contemplating about the future growth of the world economy, it seems natural to question whether the rapid growth of these economies will persist in the next few decades. Furthermore, in the aftermath of the financial crisis of 2008, the growth of these economies through the next decades will likely have important implications on the pace of the world growth as well as the relative importance of markets around the world. Thus, the long-term economic forecast of these countries is of interest at various levels from designing public welfare policies, establishing strategies for industrial development and forecasting energy demands to making investment decisions at the firm level. These questions and issues call for a need to produce long-term growth projection of these economies. From a production function approach, long-term growth depends primarily on the growth of inputs and total factor productivity (TFP). Because TFP growth is increasingly important for Asian economies, this study focuses on TFP growth within the previously mentioned 12 Asian economies. Specifically, we examine how much TFP contributed to the economic growth of these countries in both the past and in the recent periods, and provide a long-term projection of TFP for these economies for the period from 2010 to 2030. Researchers disagree on the role played by TFP in the rapid and sustained economic growth of Asian economies. Assimilationists claim that the rapid growth is mainly attributable to increases in productivity (i.e. TFP), which result from the diffusion of technologies from the advanced economies. Accumulationists, however, claim that the growth can mostly be explained by the measured input growth in these economies. We review these issues and gauge how much the relative importance of TFP growth has changed over the years for the12 Asian economies by providing TFP estimates for the past four decades and comparing these with estimates from prior studies. The estimates include the values for the post-1997 currency crisis period, which is new to the literature. We also produce projections for future TFP growth. Although long-term projections of any kind, by their very nature, encounter numerous problems ranging from forecast model misspecification to inaccuracy and heroic assumptions, given the practical importance of the projection estimates, we hope to provide a feasible projection based on an empirical model of growth. To develop a projection model, we first identify the main factors that influence TFP growth. To estimate an empirical model of TFP growth, we follow Bosworth and Collins (2003) but modify their model to incorporate intangible factors such as human capital and R&D capital in defining TFP dynamics. We estimate the empirical models of TFP growth based on a comprehensive international country-level panel data for the period from 1970 to 2007 and then use the estimation results to measure each determinant that influences TFP growth in each of the 12 Asian economies to characterize the growth experience of these economies. Finally, we use the empirical specifications obtained from the estimations as the baseline projection equation to forecast TFP growth for two subperiods: 2010–2020 and 2020–2030. The remainder of the paper is organized as follows. Section 2 reviews the issues in the measurement of TFP growth and discusses the different approaches to measuring TFP. We also summarize the controversies in the growth literature regarding the TFP growth of Asian economies. Section 3 analyzes the trends and patterns of the Asian economies’ TFP growth since the 1960s based on growth accounting method. Section 4 provides estimations of TFP growth using empirical models. Section 5 provides projections for the 2010–2030 period, and Section 6 concludes.

Given that the 12 Asian economies are contributing more and more to the world output in the recent era, their prospects of long-term growth are of particular interest for the practitioners as wells the academics in this day. This study examines the importance of TFP growth in the long-term past and future economic growth of 12 Asian economies. We analyze these economies’ patterns of growth in the past based on a calculation of TFP growth. Using a comprehensive country panel data set, we also examine TFP dynamics through estimations of several TFP growth models, decompose the contribution of factors affecting TFP growth, and produce long-term projections of TFP growth to gauge the future importance of TFP growth for these economies. The main findings are as follows: first, growth accounting results support the accumulationist's view for the pre-2000 period but the contribution of TFP increases in the post-2000 period, suggesting a shift in the growth paradigm toward productivity-based growth for these economies. These post-2000 estimates are new to the literature. Second, based on the estimation of the TFP growth model, we find that the major source of TFP growth in the Asian economies is the catch-up effect in the early years. The human capital contribution to TFP growth gradually rises for the four NIEs over time, but stagnates or weakens for the other Asian economies in more recent years. Finally, the projections based on the empirical specifications (the catch-up effect, life expectancy effect, human capital, and R&D) show that strong growth in TFP is expected for the two subperiods of 2010–2020 and 2020–2030. This projection result supports the notion that productivity-based growth will continue in the future long-term growth of the Asian economies. This study investigates the changes in the growth pattern of the Asian economies in the past and into the future. A number of issues remain that still must be overcome such as TFP calculation issues, TFP growth model specification, and appropriate projection methods, which are the proposed task for the future research. In particular, the improvements in the identification of the TFP growth model would be very beneficial in giving insights into TFP dynamics of these economies.