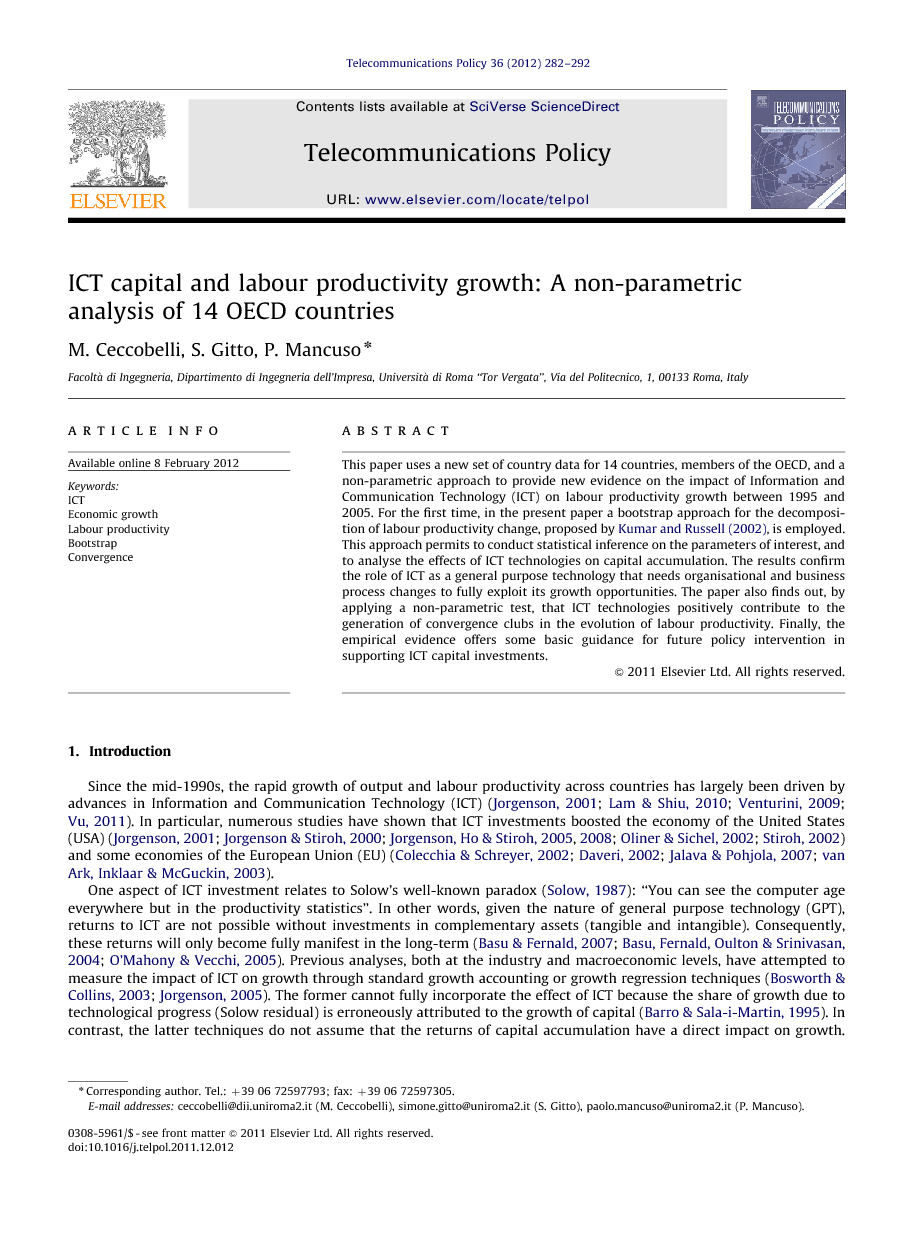 This paper uses a new set of country data for 14 countries, members of the OECD, and a non-parametric approach to provide new evidence on the impact of Information and Communication Technology (ICT) on labour productivity growth between 1995 and 2005. For the first time, in the present paper a bootstrap approach for the decomposition of labour productivity change, proposed by Kumar and Russell (2002), is employed. This approach permits to conduct statistical inference on the parameters of interest, and to analyse the effects of ICT technologies on capital accumulation. The results confirm the role of ICT as a general purpose technology that needs organisational and business process changes to fully exploit its growth opportunities. The paper also finds out, by applying a non-parametric test, that ICT technologies positively contribute to the generation of convergence clubs in the evolution of labour productivity. Finally, the empirical evidence offers some basic guidance for future policy intervention in supporting ICT capital investments.

Since the mid-1990s, the rapid growth of output and labour productivity across countries has largely been driven by advances in Information and Communication Technology (ICT) (Jorgenson, 2001, Lam and Shiu, 2010, Venturini, 2009 and Vu, 2011). In particular, numerous studies have shown that ICT investments boosted the economy of the United States (USA) (Jorgenson, 2001, Jorgenson and Stiroh, 2000, Jorgenson et al., 2005, Jorgenson et al., 2008, Oliner and Sichel, 2002 and Stiroh, 2002) and some economies of the European Union (EU) (Colecchia and Schreyer, 2002, Daveri, 2002, Jalava and Pohjola, 2007 and van Ark et al., 2003). One aspect of ICT investment relates to Solow's well-known paradox (Solow, 1987): “You can see the computer age everywhere but in the productivity statistics”. In other words, given the nature of general purpose technology (GPT), returns to ICT are not possible without investments in complementary assets (tangible and intangible). Consequently, these returns will only become fully manifest in the long-term (Basu and Fernald, 2007, Basu et al., 2004 and O'Mahony and Vecchi, 2005). Previous analyses, both at the industry and macroeconomic levels, have attempted to measure the impact of ICT on growth through standard growth accounting or growth regression techniques (Bosworth and Collins, 2003 and Jorgenson, 2005). The former cannot fully incorporate the effect of ICT because the share of growth due to technological progress (Solow residual) is erroneously attributed to the growth of capital (Barro & Sala-i-Martin, 1995). In contrast, the latter techniques do not assume that the returns of capital accumulation have a direct impact on growth. Thus, they are more appropriate to measure the role of ICT on growth and its nature of GPT (David, 1990). However, the growth-accounting approach is heavily model driven, relying on particular assumptions about the technology, market structure, technological change, and other aspects of the growth process. In contrast, Kumar and Russell (2002) employed non-parametric techniques based on Data Envelopment Analysis (DEA) to analyse international macroeconomic convergence. In particular, they decomposed the labour productivity growth components attributable to (i) technological change (shifts in the world production frontier), (ii) technological catching-up (movements toward or away from the frontier), and (iii) capital accumulation (movement along the frontier). These methods offer several potential advantages over regression techniques: they do not specify a functional form for the technology, assume that technological change is neutral, or make assumptions about market structure or the absence of market imperfections. This paper studies, for the first time according to the authors' knowledge, the effects of ICT capital on labour productivity change using DEA techniques. It is well-known that DEA models, which can account for ICT capital as a separate input, can measure the impact of this input on total factor productivity (TFP) change. However, unlike regression models, non-parametric techniques cannot quantify the contribution of ICT capital to TFP shifts. To overcome this drawback, this study followed a strategy like that used by Maffezzoli (2006) to measure the impact of the introduction of an additional variable. Accordingly, two DEA models were employed. In the first model, the aggregate measure of capital stock was used, and in the second model, ICT capital was disembodied from non-ICT capital. To compare the two models, the analysis tried to summarise the effect of ICT capital on growth. Finally, in the spirit of Quah, 1993, Quah, 1996 and Quah, 1997 studies, this paper assessed the effects of ICT capital on the convergence process. The remainder of this paper is organised as follows. Section 2 discusses the methodology. Section 3 describes the data. Section 4 reports the empirical findings, and Section 5 provides conclusions and policy implications based on those findings.

This study used a non-parametric technique to examine the relationship between labour productivity growth and ICT capital development for a sample of 14 OECD countries between 1995 and 2005. In particular, data envelopment analysis was used to decompose labour productivity shifts into TFP change and capital accumulation growth. Unlike most of the previous studies, this paper developed a non-parametric technique to consider the advantages to be obtained from bootstrap methodologies. The overall results indicate that capital accumulation was the main driving force of labour productivity growth. However, this study also found that ICT capital seems to produce an opposite effect on labour productivity growth: an increase through capital accumulation and a decrease through technological change. The first positive effect confirms the empirical evidence of related studies for the period between 1995 and 2005 (Jalava and Pohjola, 2007, Lam and Shiu, 2010 and Vu, 2011). The second negative effect indicates the presence of a technological regress caused by ICT capital. This counterintuitive result supports the hypothesis that ICT technologies are GPTs, which require complementary investments and significant temporal lags to achieve a productivity benefit. In particular, while the USA suffered the least from the impact of this component, most European countries experienced a significant impact. This finding indicates one of the future milestones of the Lisbon agenda in Europe. In fact, without complementary investments, it will not be possible to fully benefit from the advantages of ICT capital for productivity growth. Finally, the analysis of the counterfactual distributions reveals that ICT-capital may be one of the factors contributing to the generation of convergence clubs.