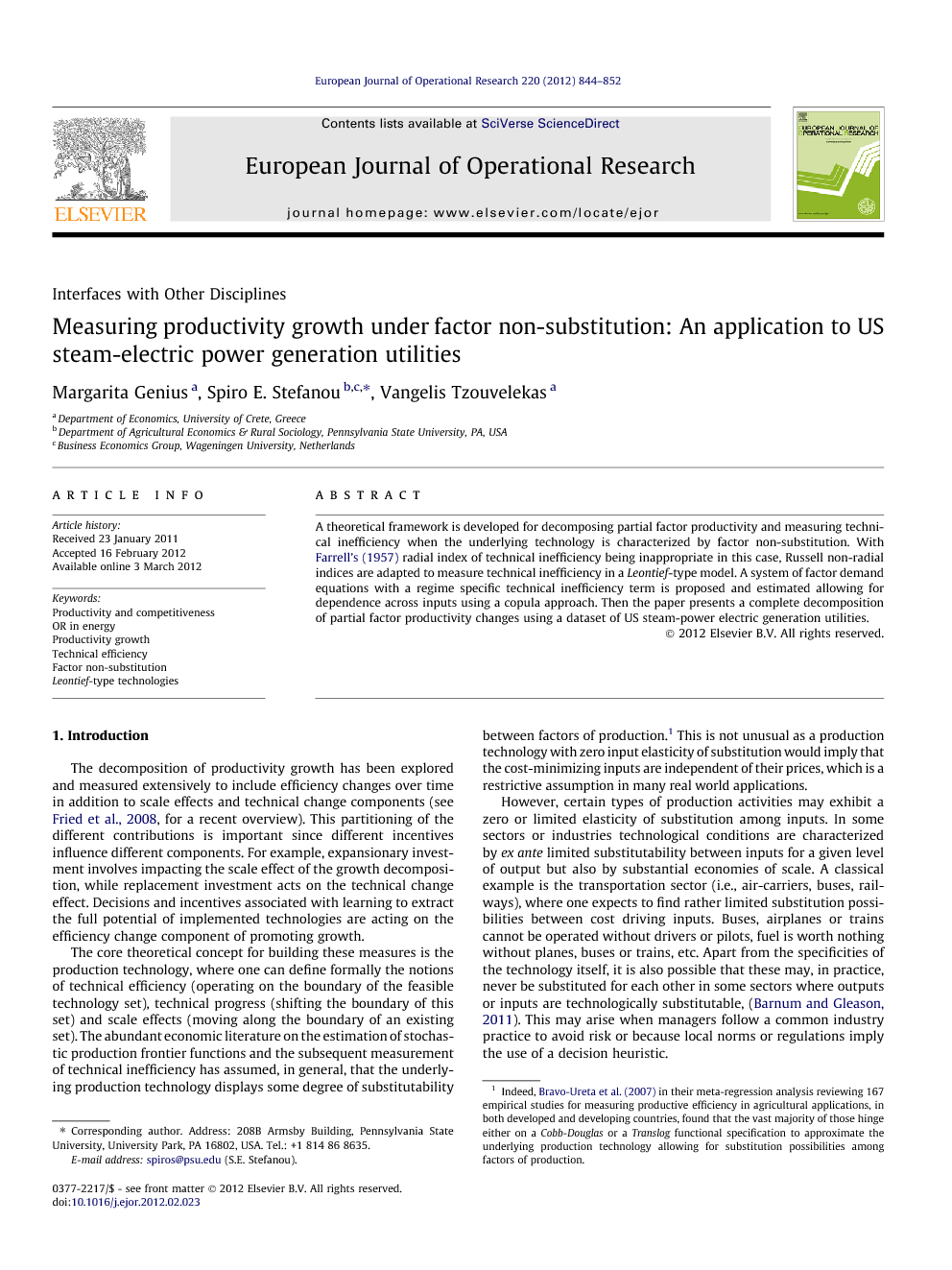 The decomposition of productivity growth has been explored and measured extensively to include efficiency changes over time in addition to scale effects and technical change components (see Fried et al., 2008, for a recent overview). This partitioning of the different contributions is important since different incentives influence different components. For example, expansionary investment involves impacting the scale effect of the growth decomposition, while replacement investment acts on the technical change effect. Decisions and incentives associated with learning to extract the full potential of implemented technologies are acting on the efficiency change component of promoting growth. The core theoretical concept for building these measures is the production technology, where one can define formally the notions of technical efficiency (operating on the boundary of the feasible technology set), technical progress (shifting the boundary of this set) and scale effects (moving along the boundary of an existing set). The abundant economic literature on the estimation of stochastic production frontier functions and the subsequent measurement of technical inefficiency has assumed, in general, that the underlying production technology displays some degree of substitutability between factors of production.1 This is not unusual as a production technology with zero input elasticity of substitution would imply that the cost-minimizing inputs are independent of their prices, which is a restrictive assumption in many real world applications. However, certain types of production activities may exhibit a zero or limited elasticity of substitution among inputs. In some sectors or industries technological conditions are characterized by ex ante limited substitutability between inputs for a given level of output but also by substantial economies of scale. A classical example is the transportation sector (i.e., air-carriers, buses, railways), where one expects to find rather limited substitution possibilities between cost driving inputs. Buses, airplanes or trains cannot be operated without drivers or pilots, fuel is worth nothing without planes, buses or trains, etc. Apart from the specificities of the technology itself, it is also possible that these may, in practice, never be substituted for each other in some sectors where outputs or inputs are technologically substitutable, ( Barnum and Gleason, 2011). This may arise when managers follow a common industry practice to avoid risk or because local norms or regulations imply the use of a decision heuristic. The first study questioning the classical substitution model was Komiya (1962) who addressed economies of scale and technical progress in the generation of steam electric power utilities in the US with two alternative specifications of the production technology; namely, the traditional Cobb–Douglas and a factor limitation model.2 His study was inspired by the engineering literature which made use of various decision heuristics for estimating the capital cost of plants of different sizes.3Komiya (1962) found that the substitution model was unsatisfactory and the limitation model provided a better fit to the production data of steam-fired electric utilities. Several studies followed examining the substitution hypothesis in several countries and different sectors. Lau and Tamura (1972) proposed the use of a non-homothetic Leontief production function to analyze the Japanese petrochemical industry, while Haldi and Whitcomb, 1967 and Ozaki, 1970 used a similar approach based on a homothetic Leontief production function in their analysis of economies of scale in US and Japanese steel industries, respectively. Nakamura (1990) utilized a non-homothetic generalized Leontief technological structure for empirically analyzing the Japanese iron and steel industry. Buccola and Sil (1996) measured productivity in the agricultural marketing sector and recently Holvad et al. (2004) assumed a Leontief-type technology for the Norwegian bus industry. Furthermore, a stream of the literature in agricultural economics addressing the modeling of crop response to different fertilizers’ nutrients levels, has maintained zero substitution among crop nutrients using a linear plateau specification motivated by the von Liebig farm technology. 4 Measuring technical inefficiency in the case of Leontief-type technologies is of interest given that Farrell’s (1957) radial measures are the basis for most applied work on the measurement of efficiency. However, radial measures can be inadequate under such technologies as they may classify inefficient input combinations as being efficient, while input and output measures might not coincide even under constant returns-to-scale. 5 Färe and Lovell, 1978, Russell, 1985, Russell, 1987 and Portela and Thanassoulis, 2005 and Cherchye and Van Puyenbroek (2009) focus on the non-radial technical efficiency measures that provide a price rationale to evaluate a mixed efficiency factor. Once the technology is governed by a Leontief-type structure, it is plausible to have inefficiency displayed by none, all or a subset of the inputs, rendering radial measures unsatisfactory. In addition, output measures may fail to recognize inefficiencies when they affect a subset of the inputs only. This paper develops a framework for modeling productivity growth under factor non-substitution that accounts for technical inefficiency and technical progress. The econometric modeling framework accommodates the absence of substitution possibilities among inputs where inefficiency between factors can be correlated. This Leontief frontier model adapts the copula approach to modeling the joint distribution between the one-sided error terms that capture factor-specific technical inefficiencies. Factor-specific technical efficiencies are specified and measured using Kopp’s (1981) orthogonal indices of technical efficiency, combined into an overall technical efficiency measure using Russell’s non-radial index of productive efficiency. Then, we proceed to developing a tractable approach for the analysis of partial factor productivity growth. An application to a panel data set of 72 fossil-fuel fired steam electric power generation utilities in the US observed during the 1986–1996 period follows. The next section develops the theoretical framework for measuring technical efficiency in production structures that exhibit zero elasticity of substitution among inputs, while Section 3 presents the empirical model discussing briefly the econometric methods used. Section 4 presents the estimation results of an application to US electric utilities and finally, Section 5 provides some concluding remarks and suggestions for future extensions.

The measurement of productivity and technical efficiency is problematic in the presence of factor non-substitution, as is the case for a Leontief technology. Radial measurements of efficiency are not adequate in this context as they can fail to recognize inefficiencies associated with a subset of inputs, while non-radial measures overcome this limitation. With a view toward generalizing the econometric measurement of factor demands in this setting, the Leontief technology specification is merged with the copula estimation of cross equation dependences to account for technical efficiency in the estimation of fuel and labor demand. The decomposition of partial factor productivity measures is developed that allows for scale effects, technical change, efficiency change and the impact of capital utilization. The tools developed have been applied to data related to the large, fossil fired steam electric generating utility facilities in the U.S. Our results indicate that labor productivity grew nearly three times faster than fuel productivity over the entire period with most of that growth taking place in the early period. The contribution of technical efficiency improvement is more dramatic for labor productivity growth. When we partition the 1986–1996 period into two sub-periods, we find that the labor productivity gains from technical efficiency changes in the earlier period dominate the later period gains with the capital adjustment contribution to the efficiency change being the dominating factor with a similar magnitude to that of the fuel productivity growth case.