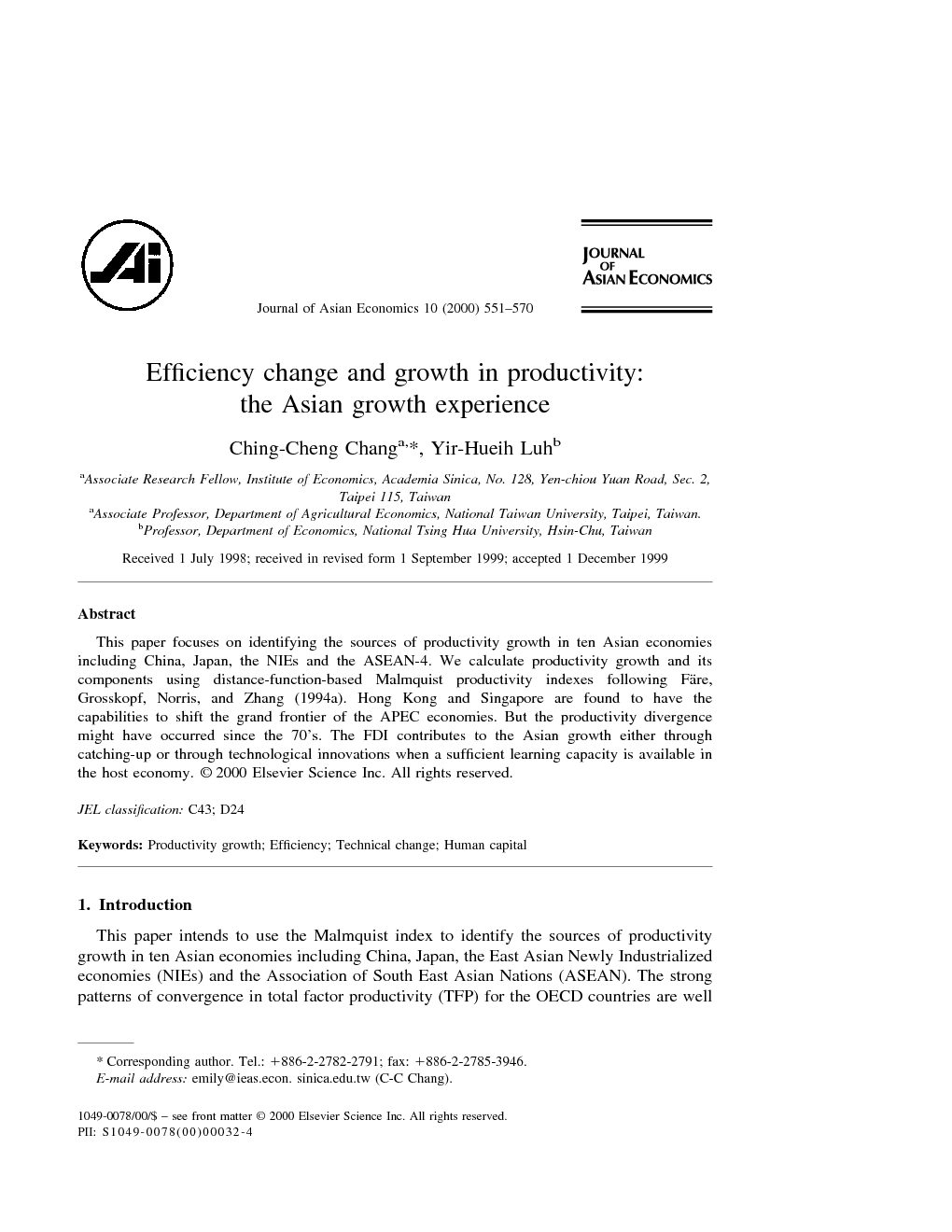 Abstract This paper focuses on identifying the sources of productivity growth in ten Asian economies including China, Japan, the NIEs and the ASEAN-4. We calculate productivity growth and its components using distance-function-based Malmquist productivity indexes following Färe, Grosskopf, Norris, and Zhang (1994a). Hong Kong and Singapore are found to have the capabilities to shift the grand frontier of the APEC economies. But the productivity divergence might have occurred since the 70’s. The FDI contributes to the Asian growth either through catching-up or through technological innovations when a sufficient learning capacity is available in the host economy.

This paper intends to use the Malmquist index to identify the sources of productivity growth in ten Asian economies including China, Japan, the East Asian Newly Industrialized economies (NIEs) and the Association of South East Asian Nations (ASEAN). The strong patterns of convergence in total factor productivity (TFP) for the OECD countries are well documented and have been widely discussed in the literature (e.g., Baumol 1986 and Dowrick and Nyugen 1989). However, the causes of rapid Asian economic growth and its sustainability have generated considerable debate among the scholars since the early 90’s (e.g., Summers and Heston 1991, Kim and Lau 1994, Young 1992, Young 1994, Young 1995 and Chen 1997). The key questions such as what is the engine of growth of the NIEs or the ASEAN-4 and what are the major differences and similarities in the growth patterns between the regions warrant further discussion. Based on the economic theory of production, productivity is generally defined in terms of the efficiency with which inputs are transformed into outputs in the production process. Indexes of productivity, therefore, are simply the ratios of an aggregate output index to an index of either single or total factor use. The TFP approach seeks to evaluate the independent influences of technical change and factor substitution. Even though it represents a clear improvement over the single factor measures by accounting for changes in the quantity and quality of all production factors, the conventional Divisia indexing procedure has the same difficulty in distinguishing movements towards the production frontier from shifts in the production frontier itself. Theory underlying the Divisia formula consists of a production function describing the technical substitutability between inputs in the production process. Since the production functions are defined on continuous time and economic data generally comes in a discrete time form, one of the major problems of measuring productivity in practice concerns finding the appropriate method to make a discrete approximation to the Divisia formula. The most popular form of approximation for the Divisia formula in the past is the Törnqvist index. The Törnqvist index calculates TFP growth based on information concerning prices, and uses cost/revenue shares as weights to aggregate inputs/outputs. However, when calculating the Törnqvist index, observed output is assumed to be equivalent to frontier output. Consequently, decomposition of the growth in productivity into the movements towards and shifts in the production frontier is not possible. The other TFP index that is defined consistently directly for discrete data is the Malmquist index. The Malmquist index has gained considerable popularity in recent years since Färe, Grosskopf, Norris, and Zhang (1994a) proposed applying the linear-programming approach to calculate the distance functions that make up the Malmquist index. There may be three reasons for this increasing popularity. First of all, since the data envelopment type of analysis can be directly applied to calculate the index, the Malmquist index has the advantage of computational ease. Second, calculation of the Malmquist index does not require information on cost or revenue shares to aggregate inputs or outputs. Consequently, the Malmquist index is less data-demanding than the Törnqvist index. Finally, the Malmquist productivity-change index is more general in that it allows for further decomposition of productivity into changes in efficiency and changes in technology. This further decomposition is important for facilitating a multilateral comparison that may help explain and characterize the differences and similarities in growth patterns for different regions. The remainder of the paper is organized as follows. In the next section, we give a brief review of the distance-function-based Malmquist productivity indexes and the linear programming method outlined in Färe, Grosskopf, and Lovell (1994b). The third section describes the empirical data. The data of our multilateral comparison comes from the Penn World Tables over the two decades 1970–80 and 1980–90. Section 4 presents the empirical results. Since the method constructs a best-practice frontier from the sample economies, the results not only allow us to compare the pattern of productivity growth and its components but also to identify economies shifting the frontier over time (i.e., the “innovators”). Section 5 discusses the role of human capital and knowledge in TFP growth among these economies. The concluding comments are offered in the last section.