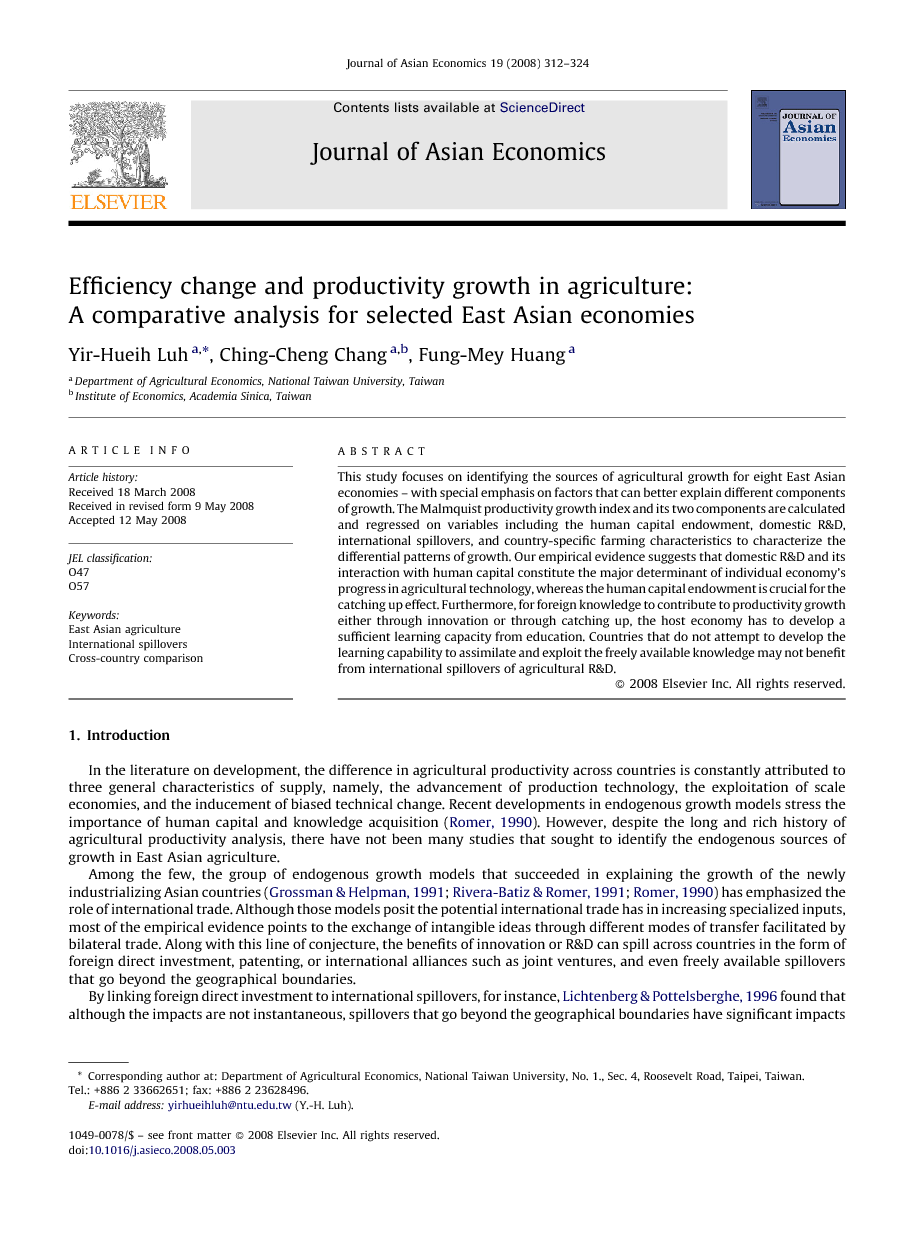 This study focuses on identifying the sources of agricultural growth for eight East Asian economies – with special emphasis on factors that can better explain different components of growth. The Malmquist productivity growth index and its two components are calculated and regressed on variables including the human capital endowment, domestic R&D, international spillovers, and country-specific farming characteristics to characterize the differential patterns of growth. Our empirical evidence suggests that domestic R&D and its interaction with human capital constitute the major determinant of individual economy's progress in agricultural technology, whereas the human capital endowment is crucial for the catching up effect. Furthermore, for foreign knowledge to contribute to productivity growth either through innovation or through catching up, the host economy has to develop a sufficient learning capacity from education. Countries that do not attempt to develop the learning capability to assimilate and exploit the freely available knowledge may not benefit from international spillovers of agricultural R&D.

In the literature on development, the difference in agricultural productivity across countries is constantly attributed to three general characteristics of supply, namely, the advancement of production technology, the exploitation of scale economies, and the inducement of biased technical change. Recent developments in endogenous growth models stress the importance of human capital and knowledge acquisition (Romer, 1990). However, despite the long and rich history of agricultural productivity analysis, there have not been many studies that sought to identify the endogenous sources of growth in East Asian agriculture. Among the few, the group of endogenous growth models that succeeded in explaining the growth of the newly industrializing Asian countries (Grossman & Helpman, 1991; Rivera-Batiz & Romer, 1991; Romer, 1990) has emphasized the role of international trade. Although those models posit the potential international trade has in increasing specialized inputs, most of the empirical evidence points to the exchange of intangible ideas through different modes of transfer facilitated by bilateral trade. Along with this line of conjecture, the benefits of innovation or R&D can spill across countries in the form of foreign direct investment, patenting, or international alliances such as joint ventures, and even freely available spillovers that go beyond the geographical boundaries. By linking foreign direct investment to international spillovers, for instance, Lichtenberg & Pottelsberghe, 1996 found that although the impacts are not instantaneous, spillovers that go beyond the geographical boundaries have significant impacts on growth. Nevertheless, the studies of Aitken and Harrison (1999), Damijan, Majcen, Knell, and Rojec (2001), Djankov and Hoekman (2000), Konings (2001) and Zukowska-Gagelmann (2002) found evidence for the negative spillover effects brought about by the presence of multinationals on the domestic firms’ productivity. Coe and Helpman (1993), on the other hand, used trade flows as carriers of international spillovers to find that both domestic and foreign R&D capital stocks have important effects on total factor productivity. Because foreign R&D capital stocks are likely to have stronger effects when import flows account for a larger share of GDP, Coe and Helpman's results also suggested that a more open economy will extract larger productivity benefits. By hypothesizing foreign patenting as the channel to transmit, Eaton and Kortum (1996) and Branstetter (2000) found that foreign research stimulates domestic private research, providing empirical support for arguments in favor of international science and technological coordination. As in any other sectors of the economy, research and extension investments are closely linked to the growth of the agricultural sector. This can be clearly seen from much work that has been devoted to measuring the rates of return on agricultural R&D. However, the findings in a couple of recent studies suggest the existence of international spillovers as well as its contribution to the agricultural sector (Gutierrez & Gutierrez, 2003; Johnson & Evenson, 1999; Schimmelpfennig & Thirtle, 1999). Therefore, without properly taking into account the effect of international spillovers, previous estimates of rates of return on R&D may end up overstating the effects of domestic R&D on agricultural growth. Accordingly, identifying the linkages between international spillovers and the growth of agriculture is important in the sense that it may help explain agricultural growth, and what is more important, it will help characterize the differential patterns of growth in multilateral comparison. This study focuses on identifying the sources of agricultural growth for eight East Asian economies – China, Indonesia, Japan, Malaysia, the Philippines, South Korea, Thailand and Taiwan. To characterize the differential patterns of growth, the Malmquist productivity growth index and its two components were calculated and regressed on variables including the human capital endowment, domestic R&D, knowledge spillovers going beyond geographical boundaries, and country-specific farming characteristics. The effects of R&D spillovers were proxied by constructing an import-weighted sum of trade partners’ R&D stock. This spillover index hypothesizes that a country receives relatively more knowledge spillovers from countries from which it imports relatively more goods and services. In some sense, this proxy variable indicates that the country's capacity to adopt foreign technologies is dependent upon its degree of trade openness. Although the proxy variable is likely to capture only the impact of foreign knowledge channeled through trade flows, it accounts for the impact of international technology spillover based on a major channel of knowledge diffusion exploited in existing research. The remainder of the paper is organized as follows. In the next section, we briefly introduce the model and the empirical specifications. The data are described in the third section. This is followed by a presentation of the empirical estimates and a discussion of the results, while the final section consists of our conclusions.

This study focuses on identifying the sources of agricultural growth for eight East Asian economies. Three different growth patterns are observed for the sample economies. First of all, the productivity of Thailand, the Philippines and Indonesia experienced deterioration in the early periods and then gradually leveled off. Although the three economies all exhibited efficiency improvements over time, agricultural productivity had deteriorated because technical regress had a dominating effect on the improvement in efficiency. Contrary to the previous case, Japan and Malaysia exhibited obvious improvements in productivity over time, and the reason for such improvements may be due to consistent technical progress and efficiency improvement over the entire time span. For economies such as China, Korea and Taiwan, the productivity-change index does not reveal either an upward or downward trend. A further look at the two components in productivity change suggest that the fluctuation of productivity change depends mostly on either the technical-change or efficiency-change component, which did not exhibit much variation over the entire time span. Further decomposition results of efficiency change and technical change indicate that, with only very few exceptions, almost all East Asian agriculture achieves pure efficiency improvements over the entire time span, while input bias contributes positively to the performance of the agricultural sector in the form of technical progress. However, the major source of technical regress for most economies is the deterioration in magnitude. This magnitude of the technical regress provides a reasonable explanation for the deterioration in agricultural productivity experienced by the Philippines and Thailand. To further explain the differential patterns of growth observed in the region, we explore the implications of our results by incorporating the human capital endowment, domestic R&D, international spillovers, and country-specific farming characteristics into the model. The results suggest that, for most East Asian economies, domestic R&D is an important determinant of the growth of the agricultural sector, whereas international R&D spillovers can promote growth only through advances in education levels. Our work departs from the previous literature by identifying factors that can better explain the two components of productivity growth. Our empirical evidence suggests that domestic R&D and its interaction with human capital constitute the major determinant of an individual economy's progress in agricultural technology, which is in accordance with the general expectation that, although the generation of new technology comes from investment in R&D, to have the newly developed technology take effect may involve investments in human capital. On the other hand, our results also suggest that human capital is the major determinant of the catching up effect. A well-trained or well-educated worker is in a better position to be adaptive to changing technologies and to make necessary adjustments, which will eventually lead to more efficient production. One of the important implications of the component regression is that foreign R&D alone does not play an important part in promoting the East Asian economies’ technological progress or efficiency change. That is, for foreign knowledge to contribute to productivity growth either through innovation or through catching up, the host economy has to develop a sufficient learning capacity from education. This observation confirms the previous argument that the transfer of agricultural technology beyond the geographical boundaries is more difficult than the transfer of industrial technology (Gutierrez & Gutierrez, 2003; Hayami, 1997 and Sachs, 2001). That is, countries that do not attempt to develop the learning capability to assimilate and exploit the freely available knowledge may not benefit from international spillovers of agricultural R&D. This paper is subject to limitations and there remain a couple of ways in which the analysis can be extended and generalized. In the present setting, the effects of foreign R&D spillovers are assumed to be channeled through international trade. The spillover index constructed in this study thus tends to embody a major component of the whole process of international knowledge spillovers. Consequently, our empirical results ought to be interpreted with caution