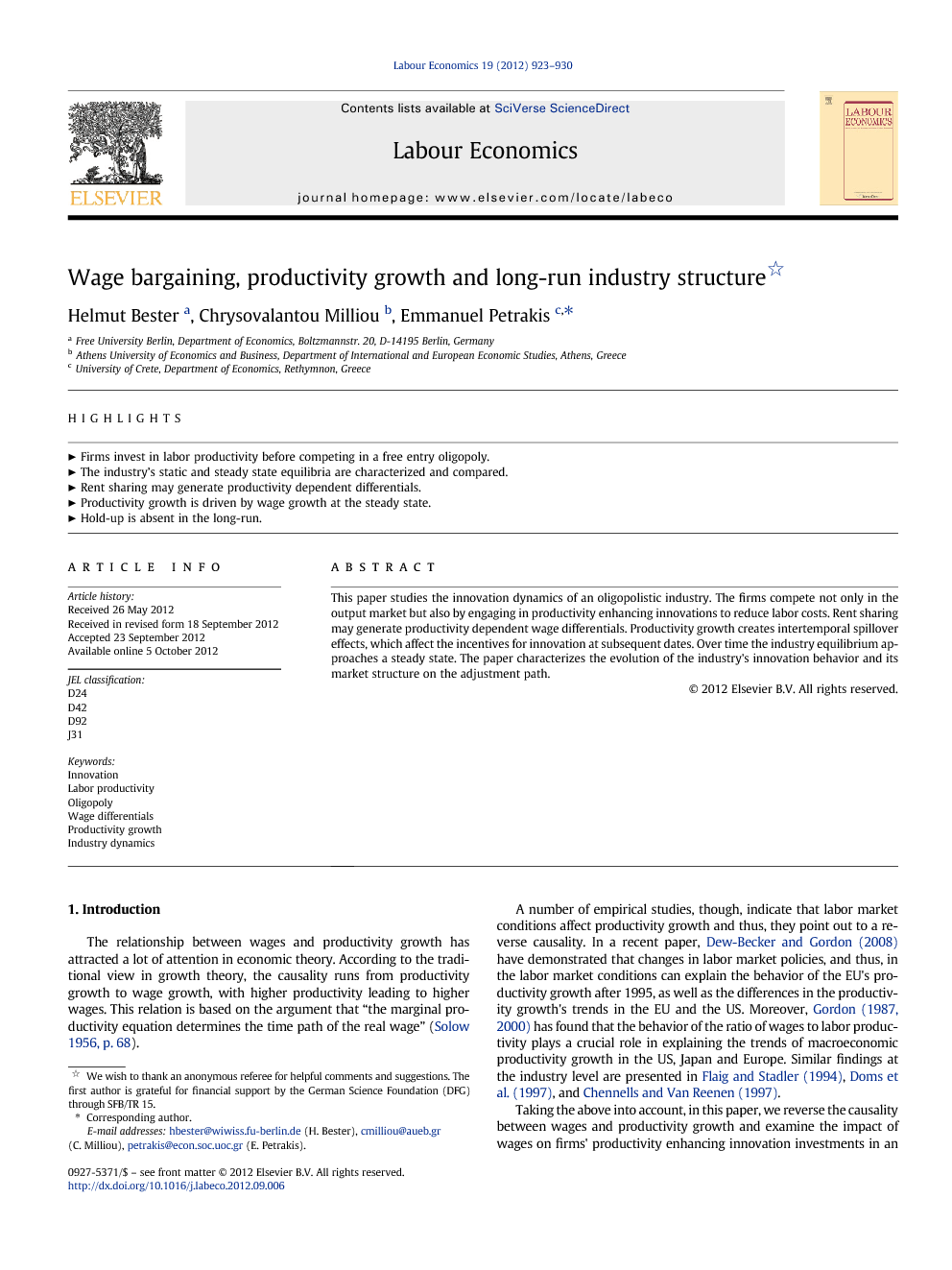 This paper studies the innovation dynamics of an oligopolistic industry. The firms compete not only in the output market but also by engaging in productivity enhancing innovations to reduce labor costs. Rent sharing may generate productivity dependent wage differentials. Productivity growth creates intertemporal spillover effects, which affect the incentives for innovation at subsequent dates. Over time the industry equilibrium approaches a steady state. The paper characterizes the evolution of the industry's innovation behavior and its market structure on the adjustment path.

We have shown that the labor market characteristics can play a crucial role in our understanding of the innovative performance, as well as of the productivity of different industries and countries. We have considered an imperfectly competitive market in a partial equilibrium model which is based on a cost-push argument of innovation. Firms react by innovating to increases in the exogenous economy-wide wage rate. But also wage bargaining at the firm level influences their innovation decision. We have shown that unionization lowers the incentives for innovation in the short-run. But, perhaps surprisingly, long-run productivity growth in the steady state is independent of wage bargaining. Our findings give rise to a number of interesting empirically testable implications. An increase in the growth rate of the competitive wage is expected to lead to a more concentrated industry, i.e. fewer and larger firms, and to a pattern of exit of firms in an industry that has already reached its steady state. A similar pattern is more likely to be observed in industries in which employees have strong bargaining power than in industries with weak employees' power. We have performed our analysis under the assumption that the investment in capacity completely depreciates at the end of the period and, as a result, at the beginning of each period all firms in the industry are identical. This assumption has allowed us to focus on industry dynamics. Still, it would be interesting to consider an extension of our framework where firms could differ because, for instance, the capacity investment does not depreciate immediately and can be used for some future periods. The incumbents would then have lower costs than the current entrants. This would enrich the analysis since besides the industry dynamics, also firm dynamics would be present. The question of whether this is compatible with a steady state at the industry level, we leave for future research. Finally, an interesting extension of this paper would be to embed the analysis in a general equilibrium model, in which the economy-wide wage rate is endogenous. In such a model, aggregate productivity growth in all industries of the economy would determine the path of real wages. Hellwig and Irmen (2001) present a model of this type; but they assume all industries to be perfectly competitive. By extending their model along the lines of this paper, one might address the question of how imperfect competition and wage bargaining affect productivity growth not only in a single industry but also in the entire economy.