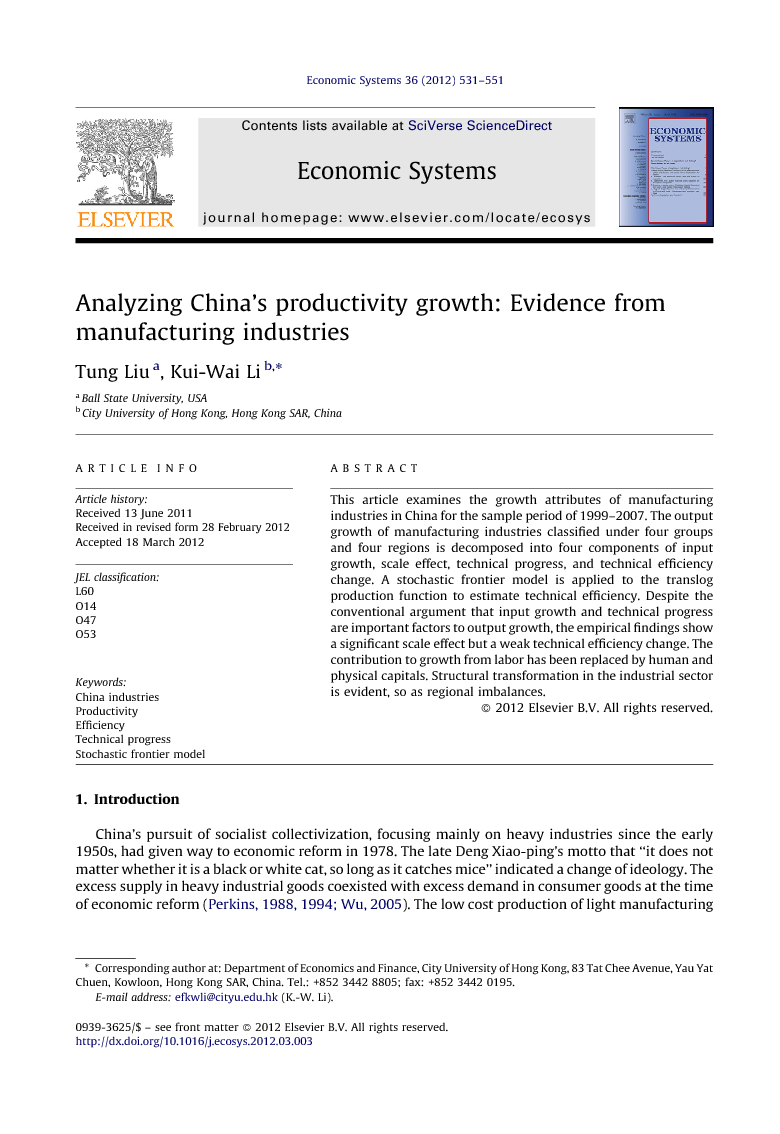 This article examines the growth attributes of manufacturing industries in China for the sample period of 1999–2007. The output growth of manufacturing industries classified under four groups and four regions is decomposed into four components of input growth, scale effect, technical progress, and technical efficiency change. A stochastic frontier model is applied to the translog production function to estimate technical efficiency. Despite the conventional argument that input growth and technical progress are important factors to output growth, the empirical findings show a significant scale effect but a weak technical efficiency change. The contribution to growth from labor has been replaced by human and physical capitals. Structural transformation in the industrial sector is evident, so as regional imbalances.

China's pursuit of socialist collectivization, focusing mainly on heavy industries since the early 1950s, had given way to economic reform in 1978. The late Deng Xiao-ping's motto that “it does not matter whether it is a black or white cat, so long as it catches mice” indicated a change of ideology. The excess supply in heavy industrial goods coexisted with excess demand in consumer goods at the time of economic reform (Perkins, 1988, Perkins, 1994 and Wu, 2005). The low cost production of light manufacturing industries along the coastal provinces attracted foreign investment. Although reform in the manufacturing industries began in the mid-1980s in the southern provinces, Shanghai was designated for development in high-technology industries in the mid-1990s (Wu, 2005). Since the 30 percent devaluation of the Renminbi in January 1994, China's manufactured exports have expanded continuously, resulting in a growing trade surplus. China's National Bureau of Statistics showed in 2008 that the manufacturing, services and primary sectors accounted for 47.4 percent, 41.8 percent and 10.7 percent of GDP, respectively. Studies on China's manufacturing sector have concentrated on a number of issues. One issue relates to the transformation of state-owned to non-state-owned enterprises in the 1997 strategy of “grasping the large, releasing the small” that increased non-state-owned enterprises (Perkins, 1988 and Wu, 2005). In dealing with the data problem, the industrial output data have been adjusted by using benchmark years and industries in Ren and Zheng (2006), Wu (2002) and Maddison and Wu (2008). Szirmai et al. (2005) point out that an adjustment in China's industrial data is more necessary at the early stage of the reform era, where data are missing, but that data reliability has increased in recent years. Another issue relates to the productivity and efficiency performance of such individual industries as iron and steel, oil and aerospace, telecommunication and insurance (Jefferson, 1990, Movshuk, 2004, Ma et al., 2002, Mu and Lee, 2005 and Yao et al., 2007). This paper focuses on the decomposition of the output growth for the manufacturing industries in China. The Solow (1957) classical growth theory that divided output growth into input growth and technical progress assumed constant return to scale and technical efficiency. The translog production function and stochastic frontier model are used to relax Solow's assumptions (Liu and Li, 2008 and Li and Liu, 2011). China's high growth in manufacturing output may suggest increasing return to scale. The translog production function relaxes the assumption of constant return to scale with a flexible nonlinear functional form. Technical inefficiency occurs when the actual output level is less than the maximum possible output with given inputs. The three ways to generate the measure of technical inefficiency are the Malmquist index, data envelopment analysis, and the stochastic frontier model. Ma et al. (2002) and Movshuk (2004) applied the Malmquist index that decomposed productivity into efficiency and technological change to study China's industrial productivity. Sun et al. (1999) and Yao et al. (2007) argued that stochastic frontier and data envelopment analyses are more effective in measuring technical efficiency in China's industries. The stochastic frontier method is preferred because the production function for the analysis of growth attributes can be estimated. The stochastic frontier model can recognize the possibility of technical inefficiency and its contribution to output growth (Aigner et al., 1977 and Kumbhakar and Lovell, 2000). The stochastic frontier model with the translog production function allows us to decompose output growth into four components: input growth, scale effect, technical progress, and technical efficiency change. The contribution of input growth comes from the growth of inputs such as labor and capitals. In addition to the physical capital, we include a human capital proxy represented by the real wages and operation expenses in each industry. The growth of input can reinforce output growth if the production function exhibits increasing return to scale. Note that the scale effect is absent in the traditional Solow's growth decomposition approach. The application of the standard stochastic frontier model with the cross-section data can give a measure of technical inefficiency. Thus, the use of the stochastic frontier model with time-varying technical efficiency and panel data from China allows us to determine if technical inefficiency exists and improves or deteriorates in China. This article studies the growth attributes of inputs and total factor productivity (TFP), which are in turn composed of the scale effect, technical progress, and technical efficiency change. Based on a total of 29,812 data values from 161 three-digit manufacturing industries in 31 provinces for the sample period 1999–2007, the paper derives the four components in the growth decomposition and compares the importance of input growth with the importance of productivity change and its three components. In addition to the estimation using the aggregate data, we consider the estimations of sub-industrial groups and regions. The manufacturing industries are classified into four major industrial groups: processing, light manufacturing, metal and machinery, and high-technology industries, according to the Industrial Classification and Codes for National Economic Activities (GB/T-2002). The country is divided into four regions: eastern, central, western, and northeastern regions. The eastern, central and western regions are purely based on geographical division (Yao and Zhang, 2001). The inclusion of a northeastern region reflects the importance of the early industrial development in China. Section 2 shows the industrial data and the performance of industries in China. Section 3 discusses the output and TFP growth decomposition methodology. Section 4 reports the empirical results and the performance of different industries across regions. The last section concludes the paper.

Armed with over three decades of economic reform since 1978, China's industrial exports have captured world attention by the turn of the 21st century. This article investigates into the factors that contribute to industrial output growth in different industrial groups and geographical regions in China. The empirical findings provide an “X-ray” on industrial performance in China by identifying its strengths, showing the various potentials and weaknesses that require additional improvements. Having achieved a high level of cheap labor-intensive manufacturing export, China should look into the next stage of industrial development if exports, especially in high-end products, are to continue to provide overall economy vigor to economic development in China. By using recent manufacturing industrial data and the appropriate proxy variables on physical capital and human capital, this article conducts a comprehensive study on the growth and productivity attributes for four main industrial groups, 29 two-digit industries, and four regions. Our growth decomposition method and regression estimate the contributions from inputs growth, scale effect, technical progress, and technical efficiency changes to output growth. We found that labor has the largest cost share in production, but its contribution to the input growth effect is the lowest, possibly implying the end of the low labor cost era in China's manufacturing. Human capital contributes about one half of the total input growth effect. This shows the improvement of labor quality. In terms of the output elasticity, the three inputs generate increasing return to scale. The increasing return to scale reinforces the input growth effect on output growth. This results in a positive scale effect for all four groups of manufacturing industries and 29 two-digit industries. In our analysis, the growth of TFP is decomposed into scale effect, technical progress and technical efficiency changes. For the aggregate of all industries, the scale effect contributes about 30 percent of the growth of TFP. The contribution of technical progress is close to the contribution from the input growth effect. The metal and machinery industry has achieved the highest technical progress, while the processing industry and the light manufacturing industry have lagged behind. Technical efficiency changes can only be found in the high-technology industry and some two-digit industries. The structure change from light industries to heavy and high-technology industries is evident by the high output growth of the metal and machinery and the high-technology industry. This transformation is mainly due to the high TFP growth. Both the metal and machinery industry and the high-technology industry have higher TFP growth than the processing industry and the light manufacturing industry. In addition, the high-technology industry has a dominant input growth effect from labor and human capital. In terms of regional growth, the central and northeastern regions have higher output growth than the eastern and western regions. The central region's high output growth is due to the high input growth effect. The high output growth in the northeastern region is due to technical progress and technical efficiency change. The low industrial output growth in the eastern region is mainly because some provinces are increasingly becoming services oriented and moved away from manufacturing. Other than the performance of individual industry group and region, the macro picture is that China's industrial strength is based mainly on input growth and the subsequent improvement in technical progress. These two factors probably explain the high quantity of Chinese manufacturing output and exports. The next challenge to industrial development in China will be the quality end, including efficiency change and promotion and an appropriate development in human capital in addition to other existing problems such as regional imbalance. Nonetheless, it has to be taken into account that China has gone far in the last three decades of reform, and the question is how China can extend its industrial and economic development qualitatively and comprehensively.