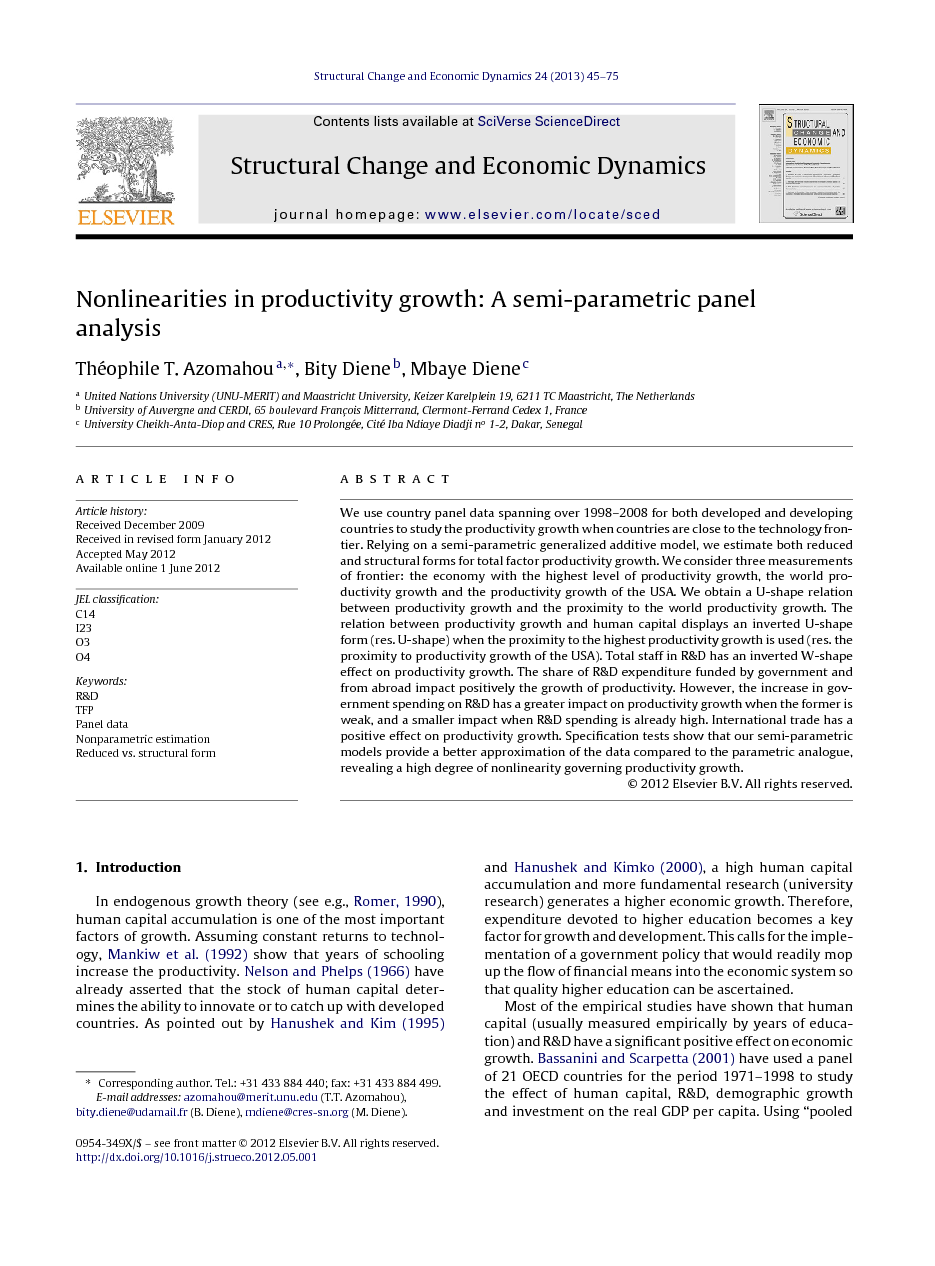 The empirical study of the determinants of productivity has gone through many contributions. The literature establishes a consensus on the crucial roles of R&D not only as stimulus of innovation, but also as facilitator of imitation. The latter requires a transfer of technology from firms or holding country to imitators, hence the importance of technological gap between firms or countries, meaning the distance to the frontier. For the transfer is beneficial and become an engine of growth, one needs absorptive capacity. This highlights the importance of human capital, but also that of openness of a country as well as investment flows. The empirical study of these determinants was made until now in a parametric framework of reduced form models. Such a framework has the merit to clarify some mechanisms (technological externalities, diminishing returns to R&D, complementarity between the proximity to the frontier and the stock of human capital and the ability of the latter to be growth-enhancing) that aim to drive economic policy. The issues of endogeneity and measurement errors in these specifications have been also taken into account to correct for estimation bias. However, the parametric framework does not identify more complex mechanisms that may lead to nonlinearities in productivity growth. The present study fills this gap by revisiting the effect of the determinants of productivity growth in a nonparametric paradigm. We considered not only reduced form estimation, but also structural forms thereby emphasizing the issues of endogeneity and simultaneity. We also studied the sensitivity of results to different choice of proximity to frontier. Our estimates show that there are strong nonlinearities in productivity growth, which also reflects important heterogeneity effects. Three key results different from those that have been found so far in the literature can be delivered: i) there is a U-shaped relationship between TFP growth and proximity to the frontier. Previous contributions based on parametric models find either a positive or a negative effect. ii) The growth rate of productivity increases with human capital up to a certain level and then decreases, describing an inverted U-shaped relationship. iii) The share of government spending on R&D has a positive effect on TFP growth. However, this effect is stronger for low values of governmental spending. The effect is lower when government spending is already high. This reflects two phases of the impact of government R&D spending on productivity growth. The first phase corresponds to a strong a positive effect whereas the second phase may be viewed as a decreasing efficiency of government spending (once a certain threshold) to boost productivity growth. In terms of economic policy, this suggests a diversification of sources of R&D funding starting from certain level of government spending. One can also think that from a certain level, government spending must be accompanied by other measures to make government spending more effective. Some avenues for future research emerge from these results. The first concerns the development of a theoretical model that would provide an analytical framework for empirical results obtained from the structural model. A second track is to include analysis of panel data co-integration within our nonparametric framework with special attention to the issue of convergence. Both avenues are very promising.