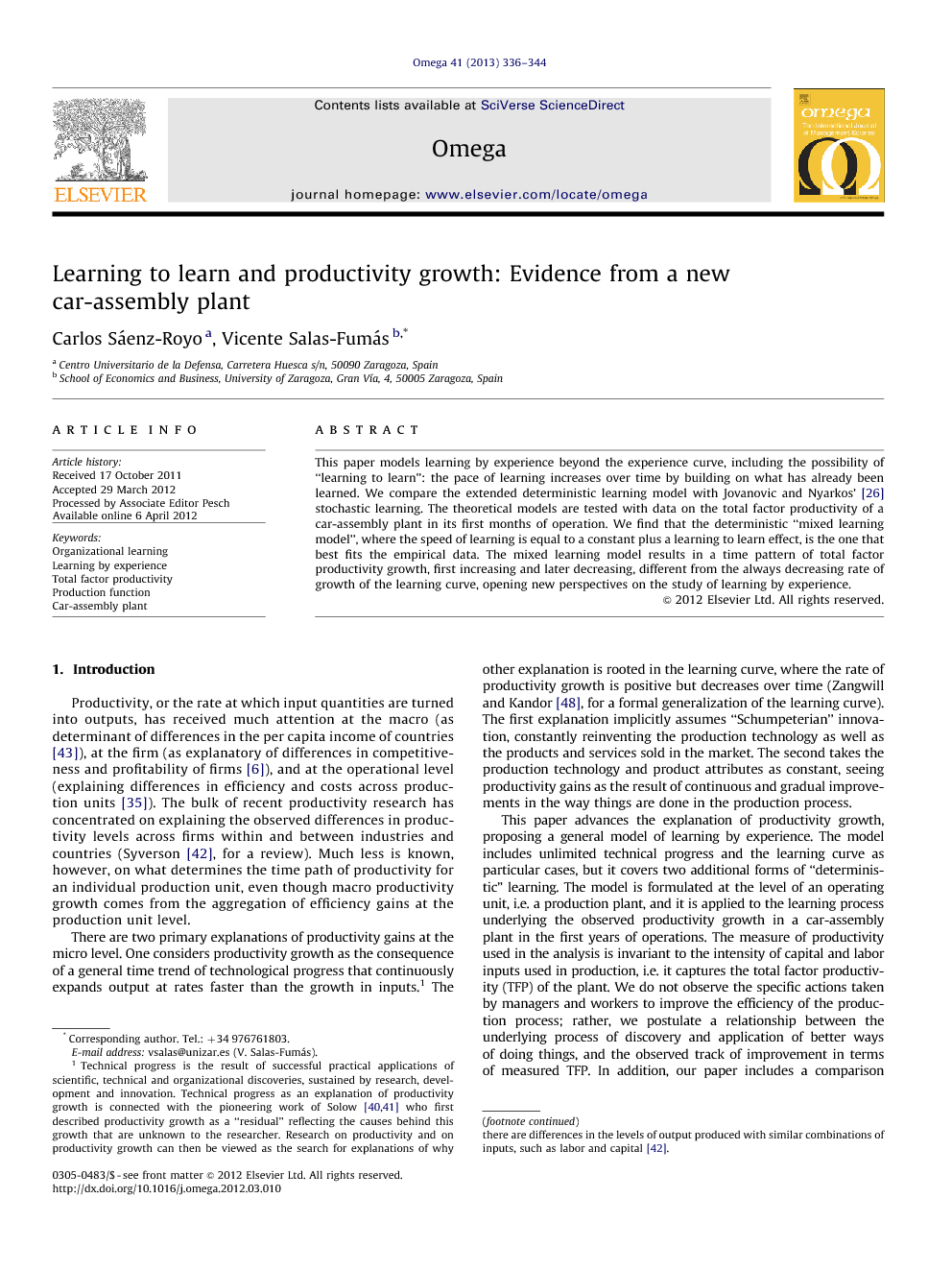 This paper models learning by experience beyond the experience curve, including the possibility of “learning to learn”: the pace of learning increases over time by building on what has already been learned. We compare the extended deterministic learning model with Jovanovic and Nyarkos' [26] stochastic learning. The theoretical models are tested with data on the total factor productivity of a car-assembly plant in its first months of operation. We find that the deterministic “mixed learning model”, where the speed of learning is equal to a constant plus a learning to learn effect, is the one that best fits the empirical data. The mixed learning model results in a time pattern of total factor productivity growth, first increasing and later decreasing, different from the always decreasing rate of growth of the learning curve, opening new perspectives on the study of learning by experience.

Productivity, or the rate at which input quantities are turned into outputs, has received much attention at the macro (as determinant of differences in the per capita income of countries [43]), at the firm (as explanatory of differences in competitiveness and profitability of firms [6]), and at the operational level (explaining differences in efficiency and costs across production units [35]). The bulk of recent productivity research has concentrated on explaining the observed differences in productivity levels across firms within and between industries and countries (Syverson [42], for a review). Much less is known, however, on what determines the time path of productivity for an individual production unit, even though macro productivity growth comes from the aggregation of efficiency gains at the production unit level. There are two primary explanations of productivity gains at the micro level. One considers productivity growth as the consequence of a general time trend of technological progress that continuously expands output at rates faster than the growth in inputs.1 The other explanation is rooted in the learning curve, where the rate of productivity growth is positive but decreases over time (Zangwill and Kandor [48], for a formal generalization of the learning curve). The first explanation implicitly assumes “Schumpeterian” innovation, constantly reinventing the production technology as well as the products and services sold in the market. The second takes the production technology and product attributes as constant, seeing productivity gains as the result of continuous and gradual improvements in the way things are done in the production process. This paper advances the explanation of productivity growth, proposing a general model of learning by experience. The model includes unlimited technical progress and the learning curve as particular cases, but it covers two additional forms of “deterministic” learning. The model is formulated at the level of an operating unit, i.e. a production plant, and it is applied to the learning process underlying the observed productivity growth in a car-assembly plant in the first years of operations. The measure of productivity used in the analysis is invariant to the intensity of capital and labor inputs used in production, i.e. it captures the total factor productivity (TFP) of the plant. We do not observe the specific actions taken by managers and workers to improve the efficiency of the production process; rather, we postulate a relationship between the underlying process of discovery and application of better ways of doing things, and the observed track of improvement in terms of measured TFP. In addition, our paper includes a comparison between the proposed class of deterministic models with the “stochastic” learning model of Jovanovic and Nyarko [26]. We find that the learning model that best fits the empirical data is what we call mixed learning, i.e., workers and managers of the plant combine a fixed rate of learning with a “learning to learn” capability as more knowledge is acquired. The mixed learning model implies that the results of learning translate into a first period of accelerated productivity growth, followed by another period of decelerated growth, until the maximum level of operating efficiency is attained. This is precisely what we observe in the data. Other learning models, such as the exponential version of the learning curve, and Jovanovic and Nyarko's [26] stochastic learning model, do not capture the S shape in the evolution of TFP over time. Although the evidence is obtained from a single plant, the results of the paper suggest that existing explanations of TFP growth, such as generalized technical progress and the learning curve, are incomplete, and other forms of deterministic learning such as learning to learn or mixed learning should also be considered. As for the relation of the paper to the existing literature, the theory section of the paper is in line with Zangwill and Kandor [48], who model the process of continuous improvement compatible with the learning curve [4] and [47] as evidence of such improvement. Our paper is different in that we model the process of learning without limiting the results of the process to those compatible with the evidence of the learning curve. In fact, as mentioned earlier, the pattern of performance improvement of the learning curve is one of four possible results in the class of “deterministic” learning models. The learning curve, and in general, learning by doing, has been applied to units of varying complexity, from single machines (especially scheduling problems, [9], [24] and [45]) to plants [1], [5] and [39] and firms [46], [31], [32] and [6]. The performance measures considered in prior research include cost [47], [48] and [39], productivity [1], [6] and [21], and quality [15], as well as complex measures such as overall equipment effectiveness [46]. This paper is unique in that the learning unit is a start-up assembly plant, enabling us to study learning at the moment in time when it can be expected to be particularly important. The plant produces a homogeneous output and we have monthly data on the number of cars assembled. The time interval between measurements of performance is short and the effects of learning on performance are observed shortly after management decisions, spurred by what has been learned, are implemented. The monthly frequency of observations assures sufficient observations to estimate the learning model for a total time period when the car model assembled in the plant remained unchanged, as well as the main parameters of the production function different from the TFP parameter. The parameters of the production function are estimated jointly with those that capture the features of the learning process, using the Error Correction Mechanisms [17], which is another innovation of the paper. TFP has been used before as an indicator of the results of the learning process at the firm and industry level, but not often, if at all, at the plant level. The rest of the paper is organized as follows. Section 2 presents a description of the theories of learning and their respective analytical formulations for empirical estimation purposes. Section 3 contains the application of the theory to the case study of the assembly plant. Finally, in Section 4, we present the discussion of our results and the main conclusions of our paper.