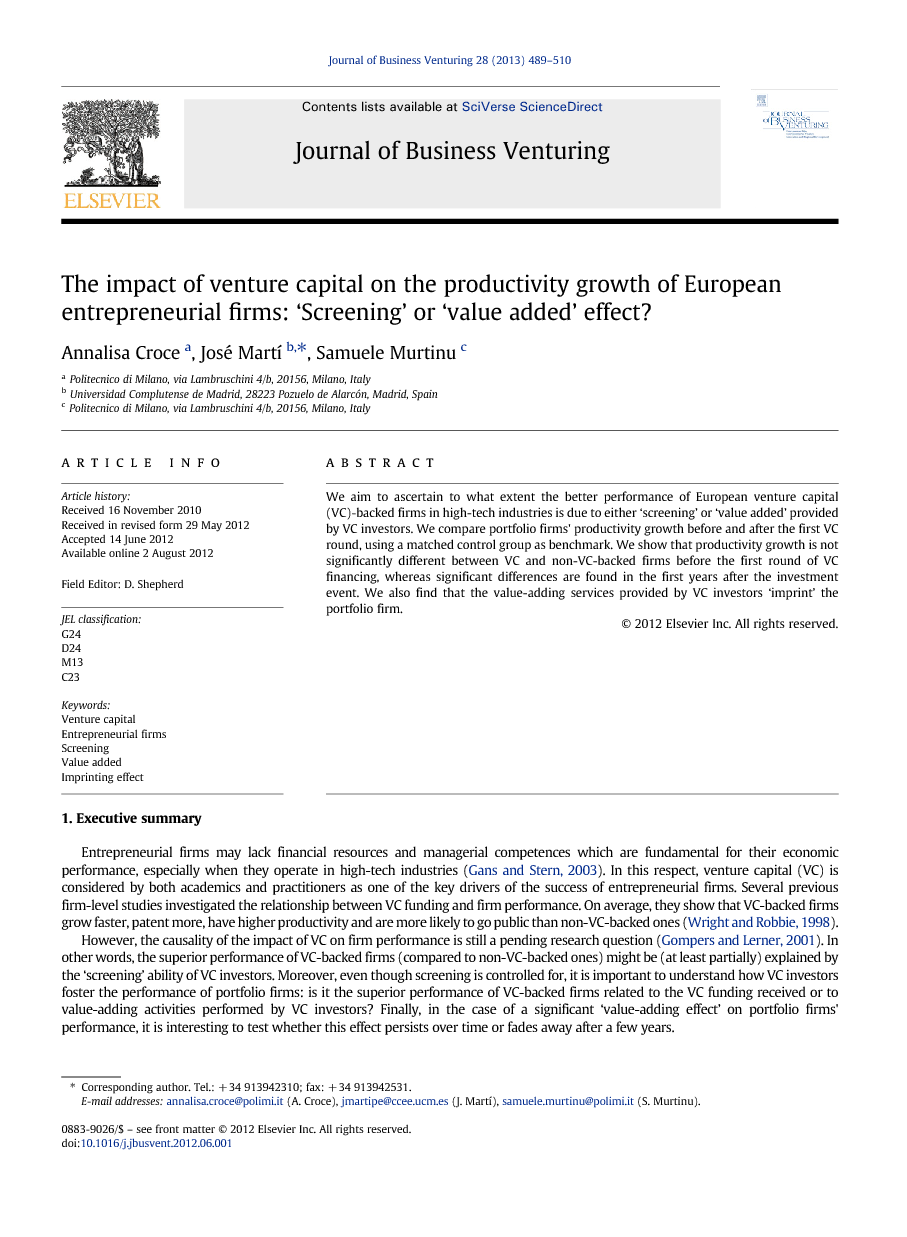 We aim to ascertain to what extent the better performance of European venture capital (VC)‐backed firms in high-tech industries is due to either ‘screening’ or ‘value added’ provided by VC investors. We compare portfolio firms' productivity growth before and after the first VC round, using a matched control group as benchmark. We show that productivity growth is not significantly different between VC and non-VC-backed firms before the first round of VC financing, whereas significant differences are found in the first years after the investment event. We also find that the value-adding services provided by VC investors ‘imprint’ the portfolio firm.

The analysis of the impact of VC financing on the performance of European entrepreneurial firms is important for managers, VCs and government authorities. There are many empirical papers that have shown the superior performance of VC-backed firms after the first VC round. Nevertheless, since it is well documented that VC managers follow a very well-structured screening process, critics have often pointed out that portfolio firms perform better because they were actually better before the investment. We proposed a procedure that allows us to control for such reverse causality concerns and furthermore that allows isolating the ‘value added’ effect from the purely ‘financial’ effect. First, our results show that productivity growth is not significantly higher in VC-backed firms than matched non-VC-backed firms before the first VC round. This is not in line with some previous studies, mostly based on US manufacturing firms. Such studies provide evidence of the strong screening abilities of US VCs. This difference in screening abilities between US and European VCs might be explained by the higher level of development of US VC market (than that of the European VC market) in financing entrepreneurial firms (e.g. Hege et al., 2003). We also test whether our results on screening were not driven by either different growth orientation between VC-backed firms and matched non-VC-backed ones or the reputation of VCs. Secondly, we show that productivity growth is substantially higher in VC-backed firms than in matched non-VC-backed ones after the first VC round. Moreover we find an ‘imprinting’ effect of VC as portfolio firms' productivity growth does not decrease after VCs' exit. Finally, we find that the impact of value-adding services provided by VCs is higher in the first two years after the first VC round. This paper contributes to the extant VC literature in several ways. First, to the best of our knowledge, it is the first large-scale multi-country empirical study in Europe on the impact of VC financing on entrepreneurial firms' performance in high-tech industries. Second, we address the reverse causality issue that arises from the idea that it is ‘screening’ rather than ‘value added’ that drives the superior performance of VC-backed firms. Third, we suggest productivity growth measures as a way to distinguish between financial support and non-financial value added provided by VCs and provide evidence on the importance of the latter as the main driver of the better performance of VC-backed firms. Fourth, it is the first study in VC literature aimed at investigating the presence of an “imprinting effect” of VCs on firm performance. Finally, most previous studies in this field suffer from methodological weaknesses, which are solved in our work.30 We are aware that this study has some limitations, which open up opportunities for future research. First, we focus on six European countries. This raises the issue of whether our results could be extended to other European countries. In particular, the VC market in Europe is not as mature as in the US. Therefore, having access to VC is probably more important (even though more difficult) for European entrepreneurial firms than for their US counterparts. Moreover, VCs' screening abilities might be more effective in the US because they have more experience. As suggested by Hege et al. (2003, p.4): ‘venture capital firms in Europe […] seem to be still lagging in their capacity to select projects. […] US VCs have better screening skills (due to their greater experience) than European ones. It follows that US VCs are better at sorting out good projects from bad ones’. This might also explain the differences found in our results, when compared to those based on US data (e.g. Chemmanur et al., 2011). Thus, it could be very useful in future works to compare US and European VC industries to understand the peculiarities as well as the features Europe has in common with the United States. Second, it would be interesting to analyze whether the support provided by different types of VCs (e.g. independent, corporate, and governmental) differs significantly. In fact, VCs constitute a quite heterogeneous crowd, especially in Europe where non-traditional VCs play an eminent role (Bottazzi et al., 2004 and Tykvova, 2006). Indeed, we expect that the effect of VC financing should differ according to the identity of the investor (Tykvova and Walz, 2007, Grilli and Murtinu, 2011 and Grilli and Murtinu, 2012). Third, even though the use of productivity growth is a strength in this work, it would be interesting to go a step further and examine what precisely are the sources of the positive effect of VC endorsement on the productivity growth of European entrepreneurial firms, i.e. whether it is mainly an output side (revenue growth) or an input side (cost saving) effect. Fourth, future research should be able to test the ‘substitution effect’ in production inputs as we suggested in Section 6. Unfortunately, we do not have data to test that idea. It would also be interesting to check whether the potential ‘substitution effect’ is related to country-specific and/or industry-specific characteristics (e.g. the potential size of the labor force, the value of R&D investment). Finally, it is worth noting that, as in almost all of the extant literature, we do not have information on other types of financing than VC (e.g. business angels, public funds, other types of pre-seed funding). This important issue, which goes beyond the scope of our work, deserves a careful evaluation in future research. In spite of the above limitations, this study considerably extends our understanding of the impact of VC investments on the performance of European entrepreneurial firms in high-tech industries. From a policy perspective, this study reveals that VC financing is a valid tool for improving the performance of European entrepreneurial firms and indirectly to increase the dynamic efficiency of the economic system. Since the business environment in Europe makes it difficult for VCs to successfully develop and exit entrepreneurial firms, incentive schemes should be further developed to enhance this type of investment (for a review of the European policy initiatives in recent years, see Bertoni and Croce, 2011).