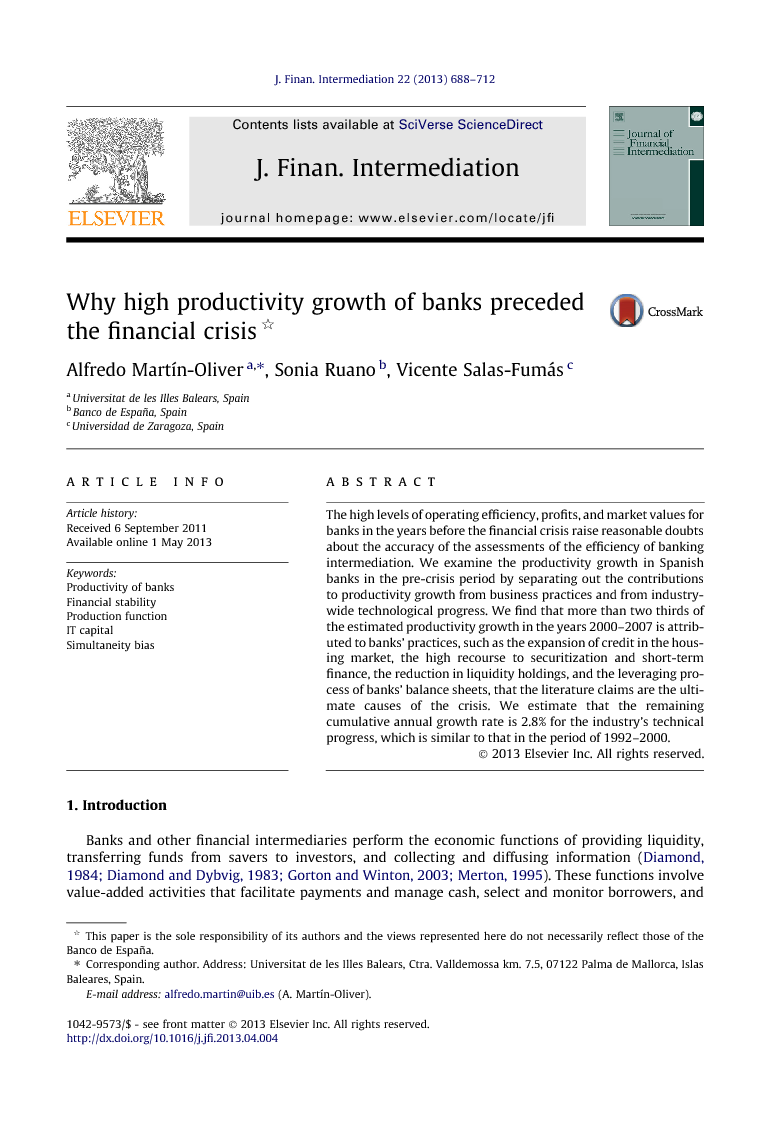 The high levels of operating efficiency, profits, and market values for banks in the years before the financial crisis raise reasonable doubts about the accuracy of the assessments of the efficiency of banking intermediation. We examine the productivity growth in Spanish banks in the pre-crisis period by separating out the contributions to productivity growth from business practices and from industry-wide technological progress. We find that more than two thirds of the estimated productivity growth in the years 2000–2007 is attributed to banks’ practices, such as the expansion of credit in the housing market, the high recourse to securitization and short-term finance, the reduction in liquidity holdings, and the leveraging process of banks’ balance sheets, that the literature claims are the ultimate causes of the crisis. We estimate that the remaining cumulative annual growth rate is 2.8% for the industry’s technical progress, which is similar to that in the period of 1992–2000.

Efficient financial intermediation is a key factor for economic development. The high productivity growth in the banking industry around the world, up to 2008, anticipated a period of prosperity and wealth creation. However, the outburst of the financial crisis revealed that these expectations were totally erroneous. Conventional measures of banks’ productivity growth as a proxy for efficiency gains in financial intermediation have been questioned, and new developments are needed to properly assess the “true” efficiency gains in the banking industry over time. This paper contributes to this development in two ways: First, with a new methodology for the measurement of productivity in banks and, second, with the measurement of the component of the industry’s productivity growth attributed to technical progress. From the methodological point of view, the paper introduces a Leontief production function for banks with IT capital as one of the inputs that is then estimated following the procedure posited in Levinsohn and Petrin (2003) and Olley and Pakes (1996) to control for the simultaneity bias between labor and productivity. This estimation method has clear implications for the policy analysis and productivity estimations of banks: First, the results obtained from the estimation of the production function cannot reject the null hypothesis of the constant returns to scale (rejected in the OLS); the return to scale properties of the production function is a key factor in mergers and restructuring decisions. Second, the estimated elasticity of the output of banks from IT capital services is twice the elasticity estimated using an OLS. Because this elasticity enters into the calculation of the contribution of IT to labor productivity growth, the contribution of IT capital is twice what it would have been in the OLS. Using the estimates to control for simultaneity, we find that the cumulative growth in IT capital per employee increases output by 27% during the sample period (1.6% cumulative annual growth) that shows the high contribution of IT capital in the banking industry. Overall, the average annual cumulative growth rate in labor productivity is 4.4% during the sample period (1.6% of IT capital contribution plus 2.8% of technical progress). As for the measurement of the industry’s advances in operating efficiency, we find that Spanish banks participate in many of the causes that led to the financial crisis. More than two thirds of the reported growth in banks’ productivity was at the expense of fuelling a housing and real-estate credit bubble. These activities created a liquidity gap between loans and deposits that were financed with MBS and interbank loans. Thus, the activities reduced the asset liquidity ratios and increased their financial leverage. This occurred at the same time that the industry maintained a steady annual growth rate in operating efficiency of 2.8%, similar to the rate in the pre-Euro period. More research is needed to advance our knowledge on how to reconcile productivity estimates of individual banks with systemic measures of financial stability. We believe that our approach offers a promising start. Haldane et al. (2010) propose using risk-free measures of output for banks in the calculations of the banks’ productivity growth within the KLEMS project. One difficulty to this approach is how to obtain the appropriate price for risk. Our approach relies on quantities and does not require information on prices, a clear advantage when taking into account the market failures that affect the pricing of risk.