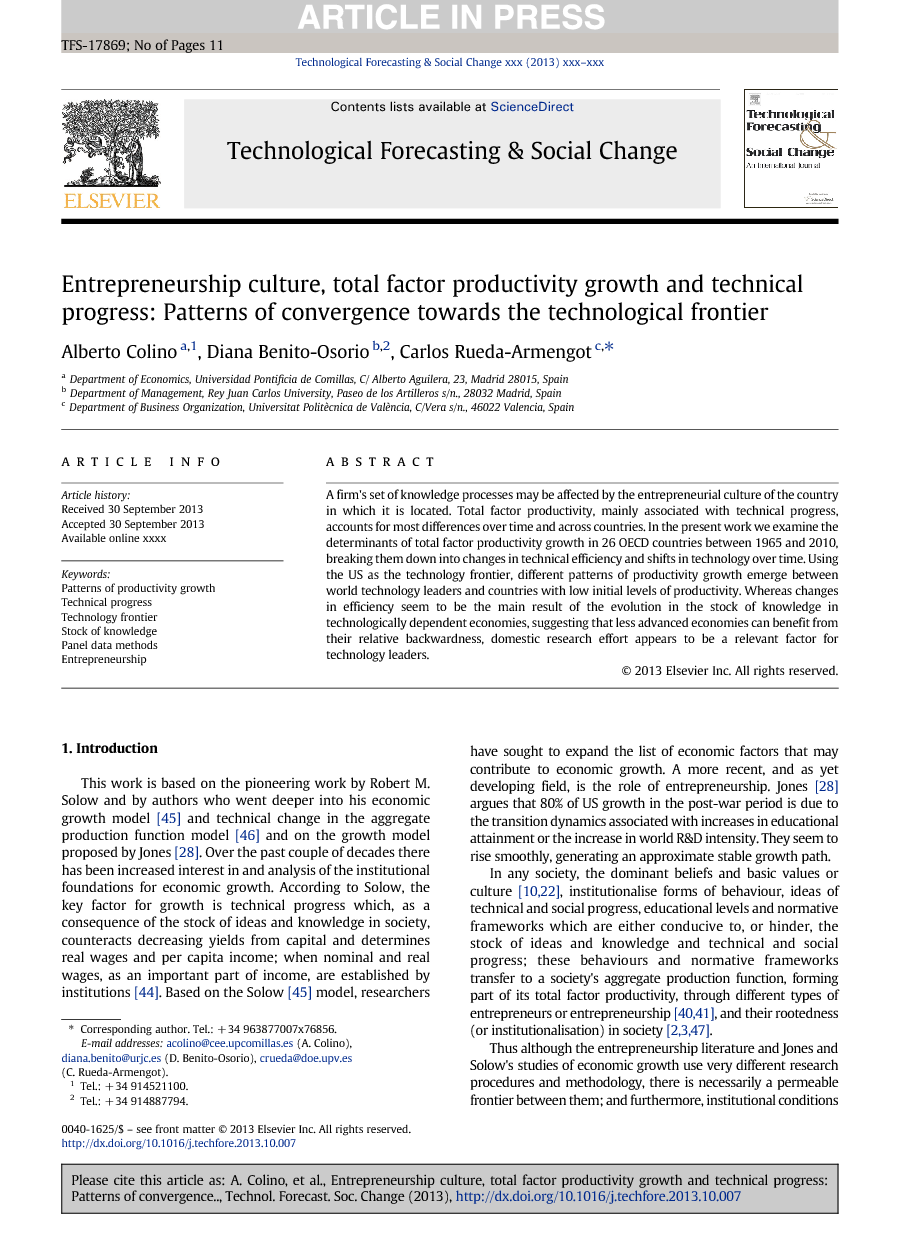 A firm's set of knowledge processes may be affected by the entrepreneurial culture of the country in which it is located. Total factor productivity, mainly associated with technical progress, accounts for most differences over time and across countries. In the present work we examine the determinants of total factor productivity growth in 26 OECD countries between 1965 and 2010, breaking them down into changes in technical efficiency and shifts in technology over time. Using the US as the technology frontier, different patterns of productivity growth emerge between world technology leaders and countries with low initial levels of productivity. Whereas changes in efficiency seem to be the main result of the evolution in the stock of knowledge in technologically dependent economies, suggesting that less advanced economies can benefit from their relative backwardness, domestic research effort appears to be a relevant factor for technology leaders.

This work is based on the pioneering work by Robert M. Solow and by authors who went deeper into his economic growth model [45] and technical change in the aggregate production function model [46] and on the growth model proposed by Jones [28]. Over the past couple of decades there has been increased interest in and analysis of the institutional foundations for economic growth. According to Solow, the key factor for growth is technical progress which, as a consequence of the stock of ideas and knowledge in society, counteracts decreasing yields from capital and determines real wages and per capita income; when nominal and real wages, as an important part of income, are established by institutions [44]. Based on the Solow [45] model, researchers have sought to expand the list of economic factors that may contribute to economic growth. A more recent, and as yet developing field, is the role of entrepreneurship. Jones [28] argues that 80% of US growth in the post-war period is due to the transition dynamics associated with increases in educational attainment or the increase in world R&D intensity. They seem to rise smoothly, generating an approximate stable growth path. In any society, the dominant beliefs and basic values or culture [10] and [22], institutionalise forms of behaviour, ideas of technical and social progress, educational levels and normative frameworks which are either conducive to, or hinder, the stock of ideas and knowledge and technical and social progress; these behaviours and normative frameworks transfer to a society's aggregate production function, forming part of its total factor productivity, through different types of entrepreneurs or entrepreneurship [40] and [41], and their rootedness (or institutionalisation) in society [2], [3] and [47]. Thus although the entrepreneurship literature and Jones and Solow's studies of economic growth use very different research procedures and methodology, there is necessarily a permeable frontier between them; and furthermore, institutional conditions that guide behaviour and establish normative frameworks are essential for producing one set of outcomes or another in the accumulation of ideas, innovation and growth in the countries examined (see Appendix A), as the technical progress function establishes (i. e. expressions (12) and (13) in the formulation). The independent term β1 (β1i = β1 + ui) in the technical progress function (13) reflects the dimension of culture and entrepreneurship in each country. Some of the conclusions of this present study, apparently quite separate from the entrepreneurship literature, are nevertheless useful for institutional policies on entrepreneurs. One of these conclusions is that the domestic research effort in countries close to the technological frontier (represented by the United States) has positive, significant consequences for those countries, whereas for less advanced countries, greater benefit can come from importing goods which incorporate technical advances and foreign direct investment. A country's culture and entrepreneurs play an important role in both cases, because entrepreneurs discover opportunities [43] and also create them. At a macroeconomic level, this article addresses the important question of the factors that determine living standards all over the world, that is, what determines per capita incomes and growth rates of economies over the long run? From the outset the economic growth literature has shown theoretically and empirically, the predominance of the classical Solow's residual over factor accumulation (i.e. physical and human capital) in the explanation of growth. As a result, total factor productivity (TFP), which is mainly determined by technical progress, appears as the principal component in the description of countries' economic performances over time, and also seems to account for the bulk of the differences in income levels and growth rates.3 In addition, the empirical literature suggests that technological diffusion matters, and therefore, countries with low initial levels of productivity can benefit from ideas created abroad. This idea is linked to the growing research interest in how organizational knowledge is generated, transferred and implemented [37]. We think that this knowledge is not simply the sum of all the stages and processes in each firm, the country where the company is located may also have an impact. Moreover, regarding organizational culture, Hofstede et al. [25] highlight that there is a significant difference between national culture and organizational culture, nevertheless, firms are embedded in societies defined by certain national culture values [10]. For this reason we think that the institutional context of a firm has become important once more. Thus, the purpose of this paper is to provide evidence of patterns of total factor productivity growth (explicitly including TFP catch-up). With that aim we endogenize and estimate total factor productivity in the framework of an economic growth model. Subsequently, we decompose total factor productivity growth into catch-up and technical change to distinguish diffusion of technology and innovation respectively. We apply our convergence model to a sample of OECD countries over the period 1965–2010. Each country is compared to the United States, which is considered to be the technology frontier.4 We find differential behaviour in countries closer to the frontier with respect to countries with less developed technological knowledge. The paper is organized as follows. First, in Section 1 we outline the growth model proposed by Jones, ‘in which long-run growth is driven by the discovery of new ideas throughout the world’ ([28], p. 221), which we use to compute total factor productivity. Then we briefly describe the background of the technical progress function evaluated here that incorporates catch-up with the technology frontier, assumed to be the United States, for our sample of industrialized countries. In Section 3 we proceed to the empirical verification of the technology frontier convergence model. Finally, in Section 4 we critically examine some of the assumptions and implications of the model, focusing on the role of human capital and stocks of ideas.

This work presents a growth model that makes total factor productivity endogenous through the explicit use of a technical progress specification for a set of technologically less developed countries. This formulation is assessed within the framework of panel data methods, which allow us to take advantage of the particular characteristics of this approach, and then improve its results. The inference procedure reveals the presence of different patterns of convergence towards the technology frontier, considered to be the United States. First, for the group of countries with higher levels of productivity the results indicate that their individual characteristics must be taken into account since they appear to be relevant for determining the pace at which technology advances. Second, the estimation for technologically less advanced countries also seems to indicate the presence of individual effects and that these effects are correlated with the other regressors of the model, providing evidence for the estimation of a fixed effects model. Thus the results indicate that the individual characteristics of both technology leaders and technologically less advanced countries including entrepreneurship are relevant for determining their progress in technology. Moreover, we have found evidence to support the idea that a higher level of technical progress in the United States leads to a higher growth in the stock of knowledge in the rest of the world. Thus, it seems that countries that are farther away in technological terms benefit to a greater extent from shifts in the level of technology at the frontier. In addition, a distinct feature between both groups emerges regarding the importance of domestic research effort. Thus, it seems that for countries closer to the frontier, domestic research effort matters whilst we have not found any significant effect of this variable for economies considered to be less technologically advanced. This finding suggests that less advanced countries in research terms can benefit from technological advances at the frontier. Likewise, greater distance from the technology leader fosters the advancement of domestic total factor productivity, showing that technologically dependent countries can take advance of their relative technological backwardness by adopting advances from abroad. We have also found that the leader's level of technical progress in technology matters for both groups of countries. Thus according to Fare et al. [16] it seems that the ‘United States consistently shifts the frontier over the entire sample period’. These results shed light on this business phenomenon (brokering knowledge) from an institutional context that has not been analysed by other researchers from this perspective before and also indicates the possibility that more consistent theory can be built upon this empirical base. Furthermore, the technology gap with the leader appears as the main contributor to the evolution of the stock of ideas for both sets of countries in our work. This result is in line with the findings of Dowrick and Nguyen [13] who point out that ‘TFP catching up has been a dominant and stable feature of the pattern of growth in the OECD since 1950’. This clearly shows that technologically dependent countries (in our work all but the United States) benefit from their relative backwardness, and suggests extending the analysis to allow for differences in the speed at which the economies converge at the frontier. Implementation of this idea will require the introduction of the determinants or different channels through which the diffusion of knowledge takes place at world level, that is, a mechanism through which technologically dependent countries in particular can take advantage of technological advances generated abroad. Among the many ways of capturing technology spillovers, the literature proposes beginning with the more obvious, for instance imports of goods or direct international investment in different economies. Moreover, the existence of significant individual effects in the estimation suggests that some specific characteristics of the countries considered, not taken into account in the proposed model, explain the different performances of these economies in terms of total factor productivity growth over the study period. In the light of this fact, the model can be improved by identifying and subsequently introducing these differential features that determine the adoption of technologies, such as institutional setups and geographic situation. It may be true that this work significantly improves the results previously obtained with this model, but it also certainly suffers from some limitations that we have to address. The research presented in this paper has implications for scholars and business practitioners. Firstly, we believe that this study contributes to the academic literature on entrepreneurial culture and total factor productivity by examining technical progress which has rarely been analysed in this context. Our work provides empirical evidence that changes in efficiency are the main component in the evolution of the stock of knowledge in technologically dependent economies and this growth in knowledge can be affected by an entrepreneurial culture. Secondly, we believe that the main managerial implication concerns the different patterns of productivity growth in world technology leaders and countries with low initial levels of productivity, which present many opportunities but also threats for managers, depending on the country they are in. Our results suggest that managers in less advanced economies can benefit from their countries' relative backwardness. Domestic research effort also appears to be a relevant factor for technology leaders, justified at a theoretical level by the principles of the economic growth model.