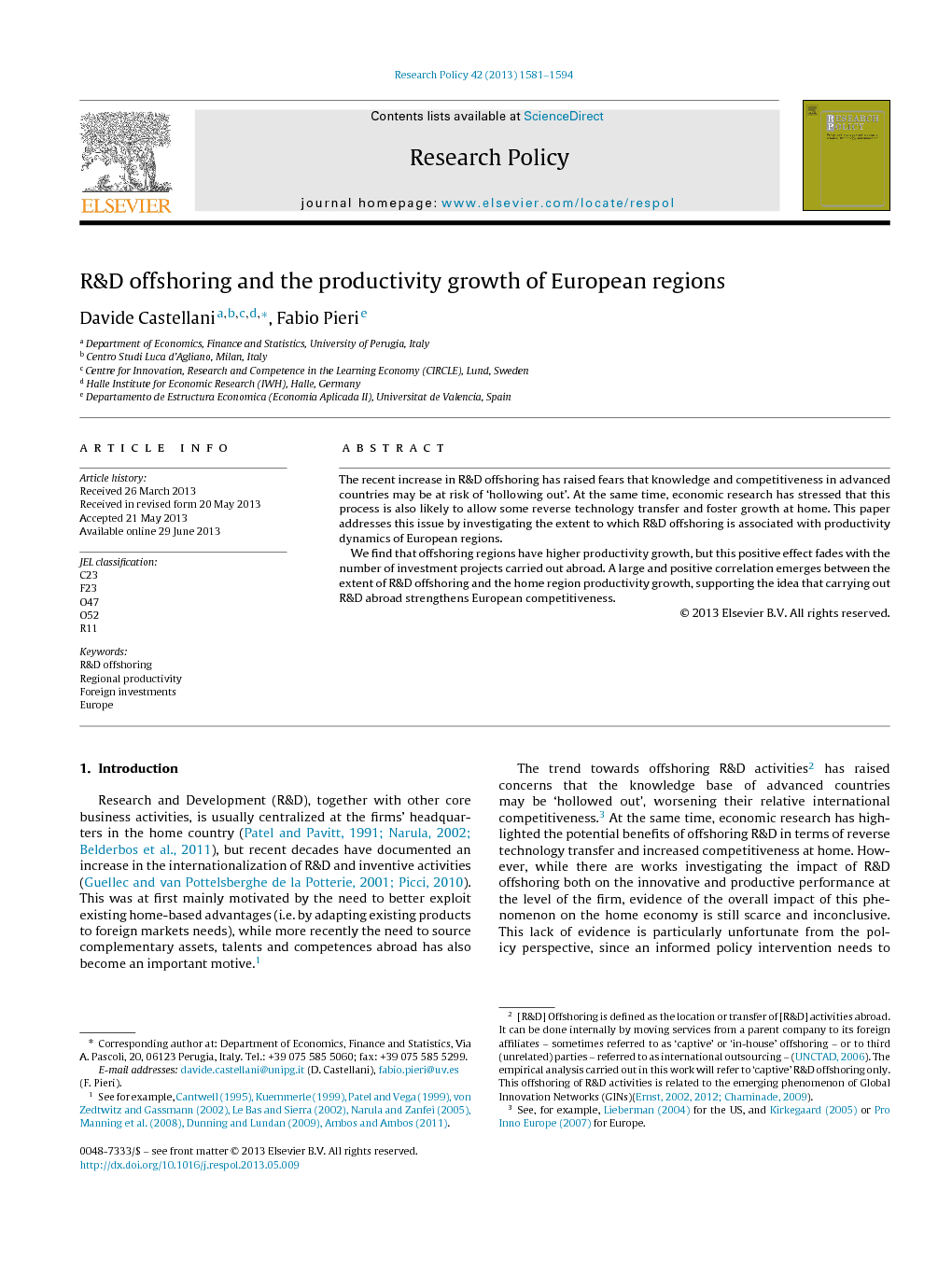 The recent increase in R&D offshoring has raised fears that knowledge and competitiveness in advanced countries may be at risk of ‘hollowing out’. At the same time, economic research has stressed that this process is also likely to allow some reverse technology transfer and foster growth at home. This paper addresses this issue by investigating the extent to which R&D offshoring is associated with productivity dynamics of European regions. We find that offshoring regions have higher productivity growth, but this positive effect fades with the number of investment projects carried out abroad. A large and positive correlation emerges between the extent of R&D offshoring and the home region productivity growth, supporting the idea that carrying out R&D abroad strengthens European competitiveness.

Research and Development (R&D), together with other core business activities, is usually centralized at the firms’ headquarters in the home country (Patel and Pavitt, 1991, Narula, 2002 and Belderbos et al., 2011), but recent decades have documented an increase in the internationalization of R&D and inventive activities (Guellec and van Pottelsberghe de la Potterie, 2001 and Picci, 2010). This was at first mainly motivated by the need to better exploit existing home-based advantages (i.e. by adapting existing products to foreign markets needs), while more recently the need to source complementary assets, talents and competences abroad has also become an important motive.1 The trend towards offshoring R&D activities2 has raised concerns that the knowledge base of advanced countries may be ‘hollowed out’, worsening their relative international competitiveness.3 At the same time, economic research has highlighted the potential benefits of offshoring R&D in terms of reverse technology transfer and increased competitiveness at home. However, while there are works investigating the impact of R&D offshoring both on the innovative and productive performance at the level of the firm, evidence of the overall impact of this phenomenon on the home economy is still scarce and inconclusive. This lack of evidence is particularly unfortunate from the policy perspective, since an informed policy intervention needs to evaluate both the firm-level effects and their interactions at a more aggregate level. This work contributes to filling this gap by assessing to what extent the productivity growth of 262 regions in Europe is associated with offshoring of R&D activities by domestic multinational enterprises (MNEs) based in the same regions. The focus on regional productivity allows us to capture not only the direct effect of R&D offshoring on firms’ competitiveness, but also the effect through the growth in size of offshoring firms (i.e. through market shares reallocation) and the indirect effect via increase/decrease in local firms’ productivity and propensity to enter/exit the market (‘spillover’ effect).4 The relationship between R&D offshoring and regional productivity is particularly relevant in the European Union (EU) where regional competitiveness and social and economic cohesion have been crucial concerns for policy makers.5 In order to investigate to what extent offshoring of R&D is associated with regional productivity growth, we gather data on international investment projects and we use these to build unique measures of outward investments in R&D at the regional level for the countries of the European Union. We then estimate regressions of productivity growth as a function of the lagged number of international R&D investments, controlling for a measure of incoming multinational activity, as well as other regional characteristics and country fixed effects. We find that offshoring regions have higher productivity growth, and a positive correlation emerges between the extent of R&D offshoring and the home region productivity growth. The contribution of this work is threefold. First, to the best of our knowledge, it is the first large sample empirical investigation into the role of R&D offshoring on home region performance, and, thus is a first attempt to provide robust empirical evidence to the broad question of whether R&D offshoring is ultimately positively or negatively associated with the growth prospects of territories within advanced economies. Second, given the availability of measures of outgoing and incoming international investments, we are able to look at the effect of R&D offshoring taking into account the extent to which each region is also attracting incoming multinational activity, thus overcoming another major gap in the literature, which has mainly looked either at the outward or at the inward internationalisation separately. Third, combining the information on the sector and destination country in which the R&D offshoring has taken place, we are able to uncover interesting insights on the possible mechanisms through which R&D offshoring affects productivity at home. The rest of the paper is organized as follows: Section 2 presents the theoretical and empirical background of this paper; Section 3 provides details on the characteristics of the data and focuses on how the main variables of interest have been measured and built; Section 4 illustrates the econometric specification and results. Section 5 concludes the paper.

In recent years, multinational firms have increasingly resorted to offshoring of R&D activities in order to cope with the need to integrate differentiated sources of knowledge and implement a faster and cheaper innovative process. This has raised fears of ‘hollowing out’ the knowledge base in the home countries of such multinationals. But, at the same time, economic research has emphasized that R&D offshoring may actually strengthen the home economies, by allowing some form of reverse technology transfer, firm growth and spillovers. This paper investigates a part of this story, focusing on ‘captive’ offshoring of R&D and analysing to what extent productivity growth in 262 EU regions is related to the creation of R&D labs abroad. This paper brings novel econometric evidence, based on a comprehensive cross-regional and longitudinal sample, on the relationship between R&D offshoring and EU regional competitiveness. In the light of the high policy importance of both offshoring and regional competitiveness in the EU, and the lack of large sample empirical analyses, we believe this paper provides a significant contribution to the extant literature and to the policy debate. Furthermore, in our econometric exercise, we are able to look at the effect of outward R&D investments taking into account the extent to which each European region is also attracting multinational activity, thus overcoming another major gap in the existing literature which has mainly focused either on the outward or the inward dimensions. Finally, combining information on the sectors and the destination countries in which EU firms offshore R&D, we able to provide a tentative interpretation of the mechanisms through which the effects on the home economies manifest. Our results suggest that regions experience a higher productivity growth when firms based in the region initiate some offshoring activity, but this positive association fades with the number of investment projects carried out abroad. These results are consistent with theoretical arguments suggesting that, whereas increasing use of offshoring and outsourcing allows to adapt existing products to new markets and to access new or complementary forms of knowledge, it may also determine a dilution of firm-specific resources, deterioration of integrative capabilities and the need of greater supervision by managers (Kotabe and Mudambi, 2009 and Grimpe and Kaiser, 2010). However, these ‘decreasing returns’ to offshoring do not seem to occur in the case of R&D. In fact, our estimates suggest that one additional R&D offshoring project is associated with a significantly higher regional productivity growth the next year. This is to be expected given that offshoring of European R&D is still relatively low, so that the tipping point where the ‘pains’ outweigh the ‘gains’ may have not been reached yet. Exploiting the information on the area of destination and the sector in which the R&D investments abroad are made, we are able to better qualify our results. In particular, offshoring is positively associated with the home region productivity growth, regardless of whether offshoring occurs within Europe or towards other emerging or advanced countries. This positive association is particularly strong in the case of R&D offshoring toward the South East Asian countries. The only exception is the case of R&D offshoring towards India, which is negatively associated with productivity growth in the home regions. We submit that the results for South East Asian countries and India may be explained by a combination of destination country characteristics and the sectoral composition of the offshored R&D activities. As a matter of fact, one should note that while in the former case the largest share of investments concentrates in high-tech manufacturing sectors, in the latter, they are heavily concentrated into knowledge-intensive services, such as software, business, financial and bank services. As Mudambi and Venzin (2010) underline, orchestrating the value-chain in such knowledge-intensive services may be more complex than in the case of the manufacturing industry. This increases the risk of ‘hollowing out’ for offshoring firms (and the regions in which they are based), due to the greater difficulties in orchestrating the global value chain. On the contrary, the relatively lower organizational problems in high-tech manufacturing and the concentration of cutting edge technologies developed in South-East Asian countries, contribute to a soundly positive association of offshoring R&D in this area with the productivity growth of EU regions. Although more research is needed to understand and separate the channels underlying the positive relation between R&D offshoring and productivity growth at home, our study sends a reassuring message to EU policymakers, since it supports the idea that carrying out R&D abroad –on average– is associated with strengthening rather than ‘hollowing out’ of European sources of competitiveness. In this perspective, governments should not discourage offshoring (of R&D in particular) and, to the contrary, they should implement policies that allow firms to engage in global R&D projects, gaining access to complementary assets and technologies which are not available in their home economies, as well as to qualified research staff.