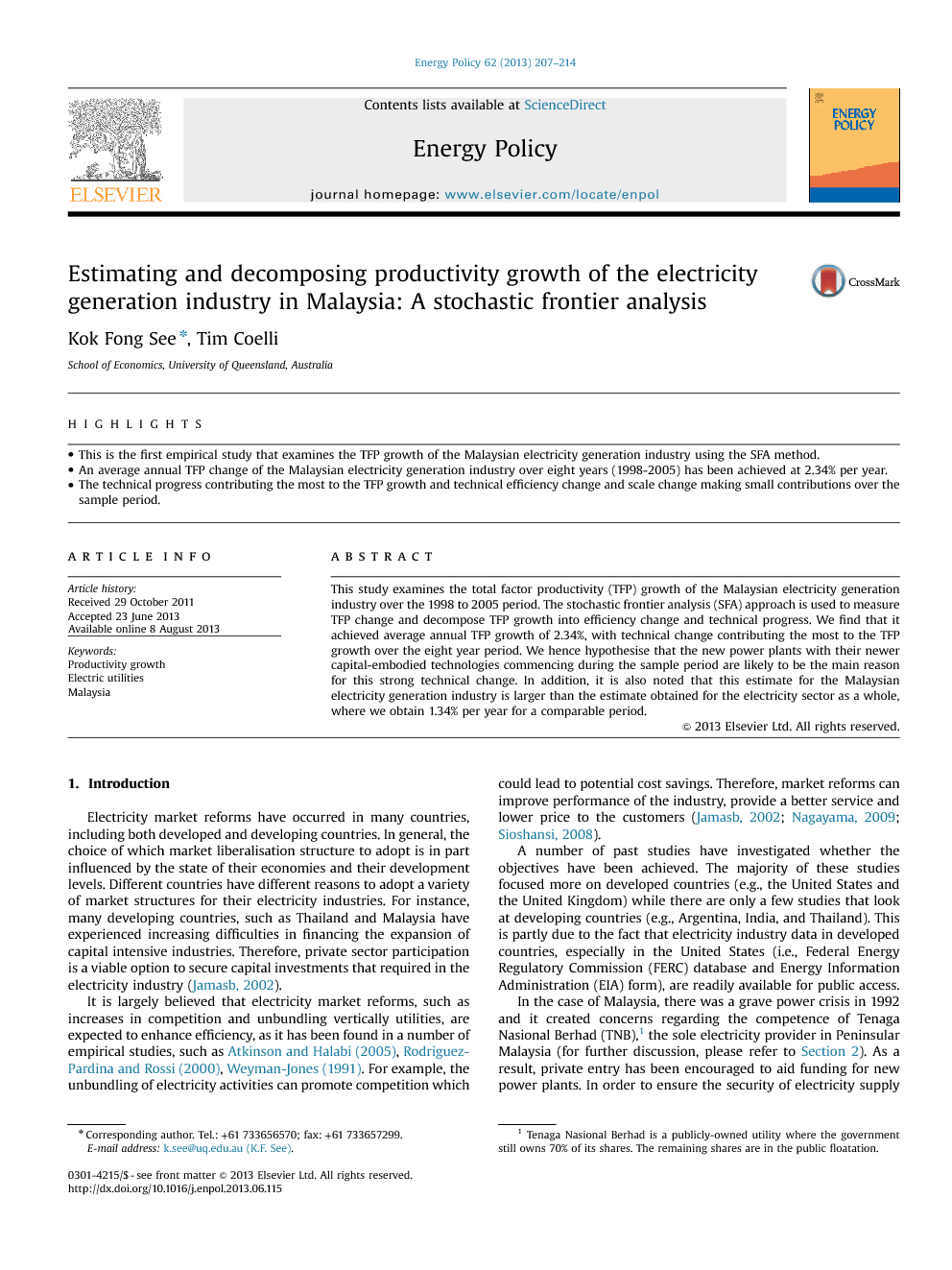 This study examines the total factor productivity (TFP) growth of the Malaysian electricity generation industry over the 1998 to 2005 period. The stochastic frontier analysis (SFA) approach is used to measure TFP change and decompose TFP growth into efficiency change and technical progress. We find that it achieved average annual TFP growth of 2.34%, with technical change contributing the most to the TFP growth over the eight year period. We hence hypothesise that the new power plants with their newer capital-embodied technologies commencing during the sample period are likely to be the main reason for this strong technical change. In addition, it is also noted that this estimate for the Malaysian electricity generation industry is larger than the estimate obtained for the electricity sector as a whole, where we obtain 1.34% per year for a comparable period.

Electricity market reforms have occurred in many countries, including both developed and developing countries. In general, the choice of which market liberalisation structure to adopt is in part influenced by the state of their economies and their development levels. Different countries have different reasons to adopt a variety of market structures for their electricity industries. For instance, many developing countries, such as Thailand and Malaysia have experienced increasing difficulties in financing the expansion of capital intensive industries. Therefore, private sector participation is a viable option to secure capital investments that required in the electricity industry (Jamasb, 2002). It is largely believed that electricity market reforms, such as increases in competition and unbundling vertically utilities, are expected to enhance efficiency, as it has been found in a number of empirical studies, such as Atkinson and Halabi (2005), Rodriguez-Pardina and Rossi (2000), Weyman-Jones (1991). For example, the unbundling of electricity activities can promote competition which could lead to potential cost savings. Therefore, market reforms can improve performance of the industry, provide a better service and lower price to the customers (Jamasb, 2002, Nagayama, 2009 and Sioshansi, 2008). A number of past studies have investigated whether the objectives have been achieved. The majority of these studies focused more on developed countries (e.g., the United States and the United Kingdom) while there are only a few studies that look at developing countries (e.g., Argentina, India, and Thailand). This is partly due to the fact that electricity industry data in developed countries, especially in the United States (i.e., Federal Energy Regulatory Commission (FERC) database and Energy Information Administration (EIA) form), are readily available for public access. In the case of Malaysia, there was a grave power crisis in 1992 and it created concerns regarding the competence of Tenaga Nasional Berhad (TNB),1 the sole electricity provider in Peninsular Malaysia (for further discussion, please refer to Section 2). As a result, private entry has been encouraged to aid funding for new power plants. In order to ensure the security of electricity supply in Malaysia, the construction of a new power plant is certainly not the only way to improve the reliability of electricity supply. Instead, efforts to improve the performance of the less-efficient power plants and network utilities should be considered. Since the productivity of the electricity generation industry in Malaysia has not been measured in the period following the electricity industry restructuring, a comparative study is conducted to investigate total factor productivity (TFP) growth in Malaysia. From the literature survey, we find that See and Coelli (2012) is the only study that has studied the performance of this sector in Malaysia in recent years. It examined technical efficiency and sought to identify the determinants of technical inefficiency of power plants in Malaysia. They employed the stochastic frontier with a technical inefficiency effects model to account for the effects of explanatory variables on the technical efficiency. To identify the sources of TFP growth in the Malaysian electricity generation industry, we employ the same dataset and the SFA estimation model used in See and Coelli (2012).2 The remainder of the paper is structured in the following manner. The Malaysian electricity industry background is briefly discussed in Section 2, and several past TFP studies are discussed in Section 3. Section 4 describes the TFP measurement tools used in the study. Our empirical results are presented in Section 5, and some concluding comments are summarised in Section 6.

There is a variety of alternative ways, such as SFA, DEA Malmquist, price-based index number to identify the source of productivity. However, the SFA for TFP indices is the preferred TFP change measurement tool in this study due to the sample size and data noise reasons. From the SFA results, it is observed that the electricity generation industry in Malaysia achieved an average annual TFP change of 2.34% over the full sample period as a result of 1.08% technical progress, a minimal 0.57% increase in productivity resulting from technical efficiency change, and 0.69% increase due to scale effects, hence we observe that technical change made the major contribution to TFP change over eight years. It is interesting to note that our efficiency change and technical change measures are larger than those reported in Yunos and Hawdon (1997) in their analysis involving Malmquist productivity indices. Furthermore, Yunos and Hawdon (1997) also find that efficiency change contributes the most to TFP growth during 1975 to 1990, while we find that technical change makes the larger contribution in our study. However, these comparisons must be interpreted with caution because the two studies have involved a different data set and time period. The Malmquist and Törnqvist indices are also applied to the data set to provide a sensitivity analysis based on different TFP measurement methods. We observe that the electricity generation industry has achieved an average TFP growth of 0.5% for the Malmquist method and 0.94% for the Törnqvist method. Both TFP change measures are lower as compared to the SFA method. The differences between the three TFP measures are essentially due to the fact that the different methods use different explicit or implicit cost and revenue shares to weight the component input and output variables. Furthermore, the non-SFA TFP estimation methods did not include the explanatory variables that were included in the technical inefficiency effects section of the SFA model. However, a plot of the three TFP measures shows that they follow a similar pattern over the sample period. We have noted that the electricity generation industry has higher average TFP growth when compared to the electricity industry in Malaysia as a whole over the same sample period. However, there is no clear evidence indicates that the role of privatisation in the changes productivity after the industry restructuring period. If the debate is to be moved forward, considerably more work will need to be done (e.g., data measurement, length of study period) in order to assess the effects of the market reforms on the TFP growth.