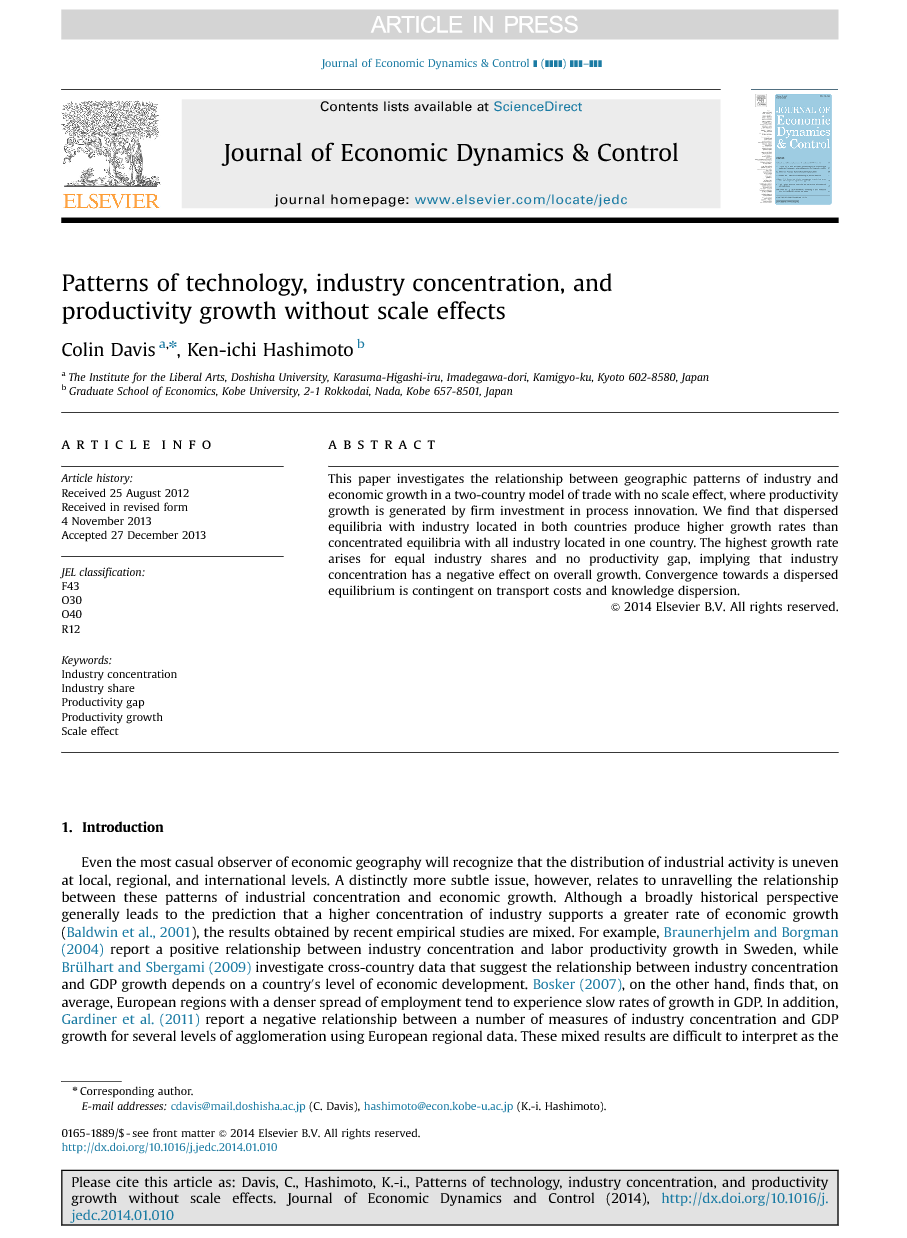 This paper investigates the relationship between geographic patterns of industry and economic growth in a two-country model of trade with no scale effect, where productivity growth is generated by firm investment in process innovation. We find that dispersed equilibria with industry located in both countries produce higher growth rates than concentrated equilibria with all industry located in one country. The highest growth rate arises for equal industry shares and no productivity gap, implying that industry concentration has a negative effect on overall growth. Convergence towards a dispersed equilibrium is contingent on transport costs and knowledge dispersion.

In this paper we have investigated the relationship between productivity growth and patterns of technology and industrial activity. In particular, we develop a two-country model of trade and endogenous growth, without scale effects, in which manufacturing firms invest in in-house process innovation with the objective of reducing production costs. Using this framework, we examine concentrated equilibria for which all industrial activity occurs in one country, and dispersed equilibria for which industrial activity is dispersed across both countries, and find that an intermediate range of transport costs, the level of which is decreasing in the level of international knowledge dispersion, is required for convergence in technologies to a dispersed long-run equilibrium. Determining the type of equilibrium to which the economy converges is important, as the highest rate of productivity growth arises in a symmetric equilibrium with no productivity gap and equal shares of industry across countries. As such, a key conclusion of our framework is that industry concentration has a negative impact on overall growth. The framework presented in this paper is limited in two respects. First, we have assumed that the production and innovation activities of a firm must occur in the same location. While this assumption fits with an international context, within an urban context, there is evidence that firms undertake production and innovation activities at independent locations (Duranton and Puga, 2001). Thus, an interesting extension might examine the relationship between industry concentration and economic growth in an urban context that allows for the geographic separation of these activities. Second, we have adopted an assumption of zero entry costs for manufacturing firms. The inclusion of product development costs for manufacturing firms would, however, allow for a richer characterization of the dynamics of entry and exit associated with greater economic integration.