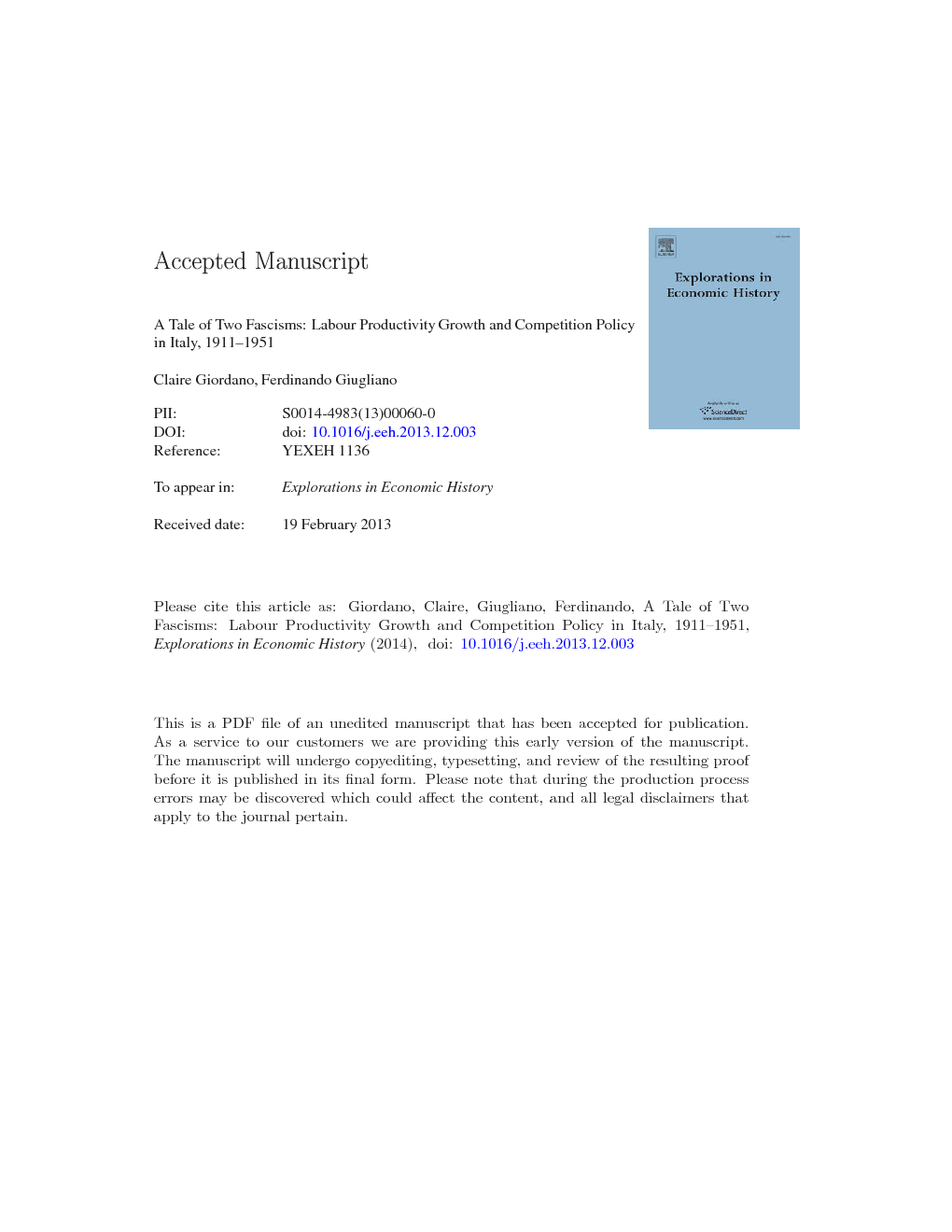 This paper provides the first quantitative assessment of labour productivity dynamics in Italy’s industrial sector between 1911 and 1951 and explores their links with competition policy. It relies on a newly compiled dataset and providesfresh labour productivity estimates, disaggregated by industrial branch. Its main finding is that the Fascist regime’s switch to a more interventionist industrial policy circa 1926–7 caused a marked slowdown in productivity growth. Nor was the government’s decision to relocate resources from the traditional to the newer industrial branches successful: our shift-share analysis shows that the contribution of (static and dynamic) structural change from old to new industries to productivity growth was negligible. Finally, we find that rises in the levels and growth rates of concentration, induced by specific Fascist measures, were associated with lower productivity levels and growth. This paper thus casts a shadow on the optimist accounts of Fascist industrial policy and confirms the findings of a revisionist literature minimising the positive role played by the State in the earlier stages of Italian industrialization.

The evolution of labour productivity in Italy’s industrial sector over the interwar era has been mainly analysed at an aggregate level. Filosa, Rey and Sitzia (1976) found that it was generally slow throughout the 1922–1938 period. More recently, Broadberry, Giordano and Zollino (2013) provided new evidence that labour productivity growth rates fell between 1911 and 1951 and that comparative labour productivity levels relative to the United Kingdom also deteriorated. However, studies on a number of other European countries over the same period have shown how disaggregated analyses are extremely important in order to understand the drivers of economic prosperity1. The “new" industries of the Second Industrial Revolution, such as chemicals, typically experienced different rates of productivity growth from those of the “old staples" (e.g. the food and clothing industry). A disaggregated analysis is especially appealing in the case of interwar Italy. The Fascist regime, which ruled the country between 1922 and 1943, oversaw the development of a “dual economy" (Tattara and Toniolo, 1976). After an initial, more liberal phase, the regime implemented an array of policies aimed at favouring new industries over the old staples. One example was the decision to revalue the lira in 1926–7 and to increase import duties, which benefited the inward-looking new branches of the economy and penalised the export-oriented old industries. This coincided with a general retrenchment from competition in the product market. The literature has emphasized the importance of these policy shifts, but doubts persist over whether they helped or hindered productivity growth. A disaggregated analysis of Italy’s industrial labour productivity growth can answer this question. In our study, we employ the recently constructed, disaggregated series of industrial value added produced by Carreras and Felice (2010) to produce benchmark estimates of labour productivity for 1911, 1921, 1927, 1938 and 1951. We then disentangle the drivers of productivity growth in the industrial sector by applying panel data techniques to a newly constructed dataset. We find that labour productivity trends in Italy’s industry were driven by growth within each sector rather than by the shift of workers out of old industries and into new ones. The poor performance of the 1930s was not, therefore, the consequence of any large-scale misallocation of resources. What hindered growth was government policy. In particular, measures aimed atrestricting competition and fostering industrial concentration had a detrimental effect on productivity. Our regression analysis shows that higher concentration levels at the beginning of each sub-period and a faster pace of growth of concentration were associated with lower rates of productivity levels and growth. Furthermore, restricting competition was most harmful in industries closer to the technological frontier, as predicted by economic theory. The main driver of growth in interwar Italywas capital accumulation. Since Italy was a laggard country, this result confirms the view that factor accumulation is generally more important than total factor productivity growth for the catching up process of an economy. The paper is constructed as follows. Section 2 presents our new benchmarks of branch-level labour productivity in Italian industry between 1911 and 1951. We also employ shift-share techniques to single out the individual contribution of the three components of labour productivity growth: internal growth, static and dynamic shift effects. Section 3 provides a short account of industrial policy in post-Unification Italy, with a specific focus on competition policy in the Fascist era. We use branch-level concentration indices to show that competition in the product market declined as of 1927, particularly in the newer industrial branches. In Section 4 we employ regression analysis to single out the drivers of industrial productivity growth, focusing, in particular, on the effects of changes in competition. Our conclusions are presented in Section 5.

Between 1911 and 1951, Italy’s industrial sector underwent a phase of significant modernisation. The sectors which had flourished in the two decades before the war became progressively less prominent and resources were moved into the branches of thesecond industrial revolution. The Fascist regime was instrumental in driving this shift. After an initial, more liberal phase, the government led by Mussolini intervened copiously to favour the likes of chemicals and mechanical engineering over textiles and food. These policies were largely a failure. Labour productivity, which had boomed during the 1920s, dipped during the Great Depression and did not recover until the 1940s. The improvements in output per worker were largely the product of capital accumulation, not of the relocation of workers into the more modern sectors. The increase in concentration, which was aimed at favouring newer industries, had a dampening effect on productivity. Overall, we provide evidence that Italy would have been better off under a regime which allowed the market to operate rather than hampering it.