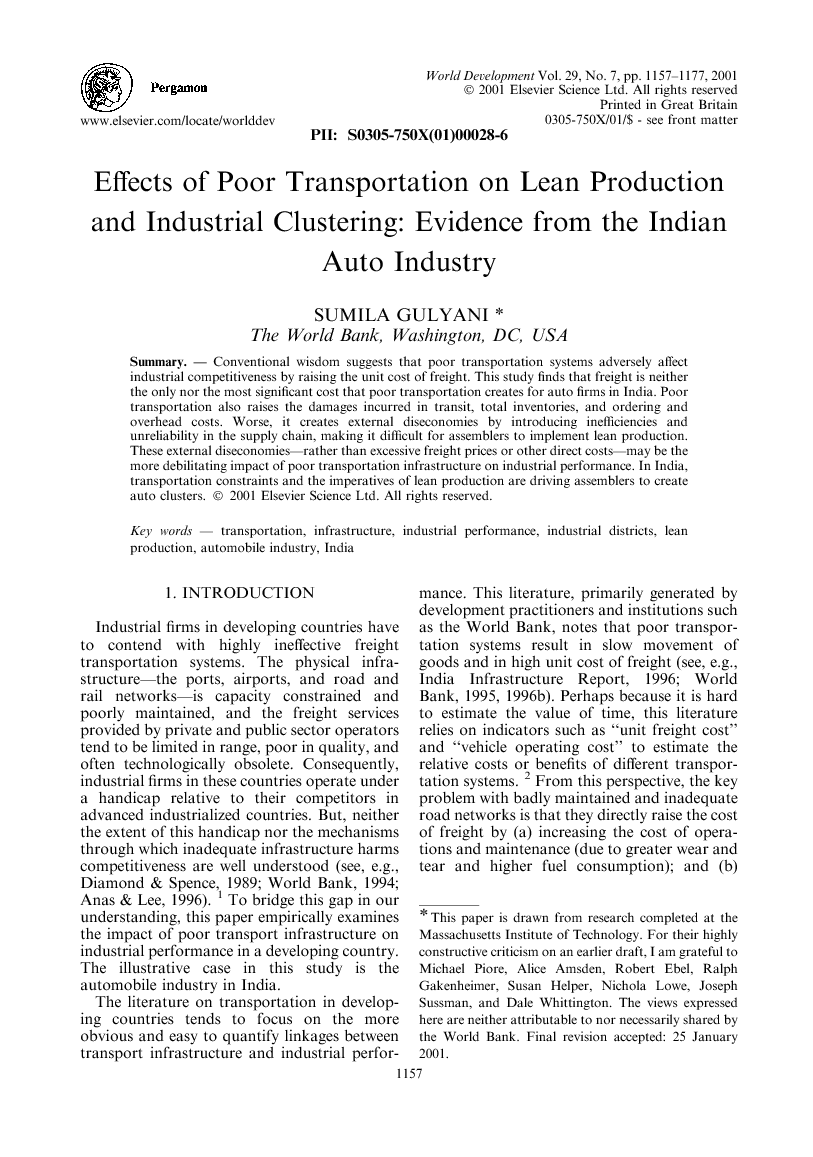 Conventional wisdom suggests that poor transportation systems adversely affect industrial competitiveness by raising the unit cost of freight. This study finds that freight is neither the only nor the most significant cost that poor transportation creates for auto firms in India. Poor transportation also raises the damages incurred in transit, total inventories, and ordering and overhead costs. Worse, it creates external diseconomies by introducing inefficiencies and unreliability in the supply chain, making it difficult for assemblers to implement lean production. These external diseconomies—rather than excessive freight prices or other direct costs—may be the more debilitating impact of poor transportation infrastructure on industrial performance. In India, transportation constraints and the imperatives of lean production are driving assemblers to create auto clusters.

The literature on transportation in developing countries suggests that the major problem associated with inadequate road networks (and poor transportation systems, in general) is that they raise transportation costs and thereby hurt competitiveness. Analyses of Maruti's expenditures—summarized in Table 4—show that the assembler does indeed incur significant freight costs. In 1996–97, Maruti's freight bill including damages accounted for 4.35% of total sales revenue. These freight costs represent a highly significant expense, given that the assembler's entire wage bill accounted for only 2.0% of total sales revenues in the year. But, as the table indicates, freight is not the largest cost variable in the total logistics cost equation: the estimated inventory carrying costs were more than double the total freight costs. The carrying cost of supply-chain inventories was 8.0% of which buffer stock accounted for 5.0% and inbound in-transit inventories for 3.0%; the latter alone exceeded the expenditures on inbound freight (1.5%) and those on outbound freight (2.5%).As compared to the traditional approach of examining freight expenditures and vehicle operating costs, the total logistics cost equation offers a more comprehensive insight into the direct costs—especially the financial costs—imposed by poor transport systems on firms. It also suggests reasons why distance between firms tends to affect competitiveness—with increasing distance, not only do freight costs increase, but so do in-transit inventories, buffer stock, and damages. As an analytical framework, however, the equation offers only a limited understanding of the transportation problem. It appears to suggest that the key problem with poor transportation is that it raises freight costs and increases the financial cost of holding inventories—that is, the problem is that assemblers have to spend more. From the assemblers' perspective, however, the more difficult problem is that poor transport systems introduce or aggravate unreliability and inefficiency in the nonlocal supply chain. They find, for example, that distant suppliers deliver far less frequently as compared to local suppliers, that only local suppliers are able to deliver just-in-time, and that the feedback and response loops tend to be slower among firms located a significant distance apart. Taken individually, just-in-time delivery, low inventories, and quick-response feedback loops are important competitive strategies; taken together, they are key drivers of the lean production system and can create dynamic gains in quality and competitiveness. Thus, poor transportation systems serve as a major obstacle in firms' efforts at implementing—and realizing dynamic gains from—competitive strategies such as lean production and supply chain management. This finding stands in contrast to much of the literature on lean production in the auto industry. These studies have found that distance from—or, conversely, proximity to—suppliers does not help explain differences in inventory levels and “leanness” at different assembly plants (Lieberman et al., 1995; Womack et al., 1990). The emerging geography of production in countries such as the United States appears to support such an argument and suggests that distance is not a primary concern for auto firms. In the United States, newer assembly and supplier plants (i.e., those built after 1980) have been located outside the traditional auto center in southeast Michigan and in communities that were not traditionally associated with the auto industry (Rubenstein, 1992). These investments have been dispersed in communities along the I-65 and I-75 corridor. Ohio is the only state that has been able to attract two assembly plants, and many suppliers have chosen to locate outside an “ideal” JIT distance of 150 km from the assembly plants they serve (Rubenstein, 1992). The difference between the above findings—based largely on research in advanced industrialized economies—and my observations can be explained as follows. Within India, the poor road infrastructure means that the transit time for road freight is both longer and more unpredictable as compared to, say, the United States and Europe. The excellent road and rail infrastructure for freight in the United States and Europe reduce the importance of proximity in their auto industries, while the terrible infrastructure in India makes proximity crucial to implementing just-in-time production in the Indian auto industry. This is also the reason why assemblers in India, unlike those in the United States, are selecting locations with a significant existing supplier base, clustering with other assemblers, and pushing suppliers to relocate in close proximity to their own assembly plants. Poor transportation, combined with the logic of lean production, is determining the geography of production in the Indian auto industry. What are the wider implications of this analysis of a particular industry (automobiles) in a particular developing country (India)? First, it argues for the reintroduction of the infrastructure variable into the debates on economic geography, industrial districts, globalization, and industrial competitiveness. It highlights how physical infrastructure can influence firm level competitive strategies, the nature of interfirm networks, and the geography of production. These effects combined with its more intuitively obvious impacts on production costs and efficiency make infrastructure a critical variable influencing industrial performance. Second, this study suggests that there is a need to resurrect the old concept of external economies in transport and infrastructure analysis, and to broaden the set of direct cost variables with which we work. Recent literature and practice takes far too narrow a view of the benefits and costs that infrastructure creates. By relying on easily quantifiable and narrowly defined proxy indicators such as freight costs and vehicle operating costs we may be making significant errors in identifying and selecting transportation investments and projects. Indeed, we may be underinvesting in precisely those types of infrastructure projects that are worthy of public investment—those that create large external economies and contribute more significantly toward enhancing industrial development and performance.