عنوان انگلیسی
The use of a lean production index in explaining the transition to global competitiveness: the auto components sector in South Africa
دانلود فوری مقاله + سفارش ترجمه 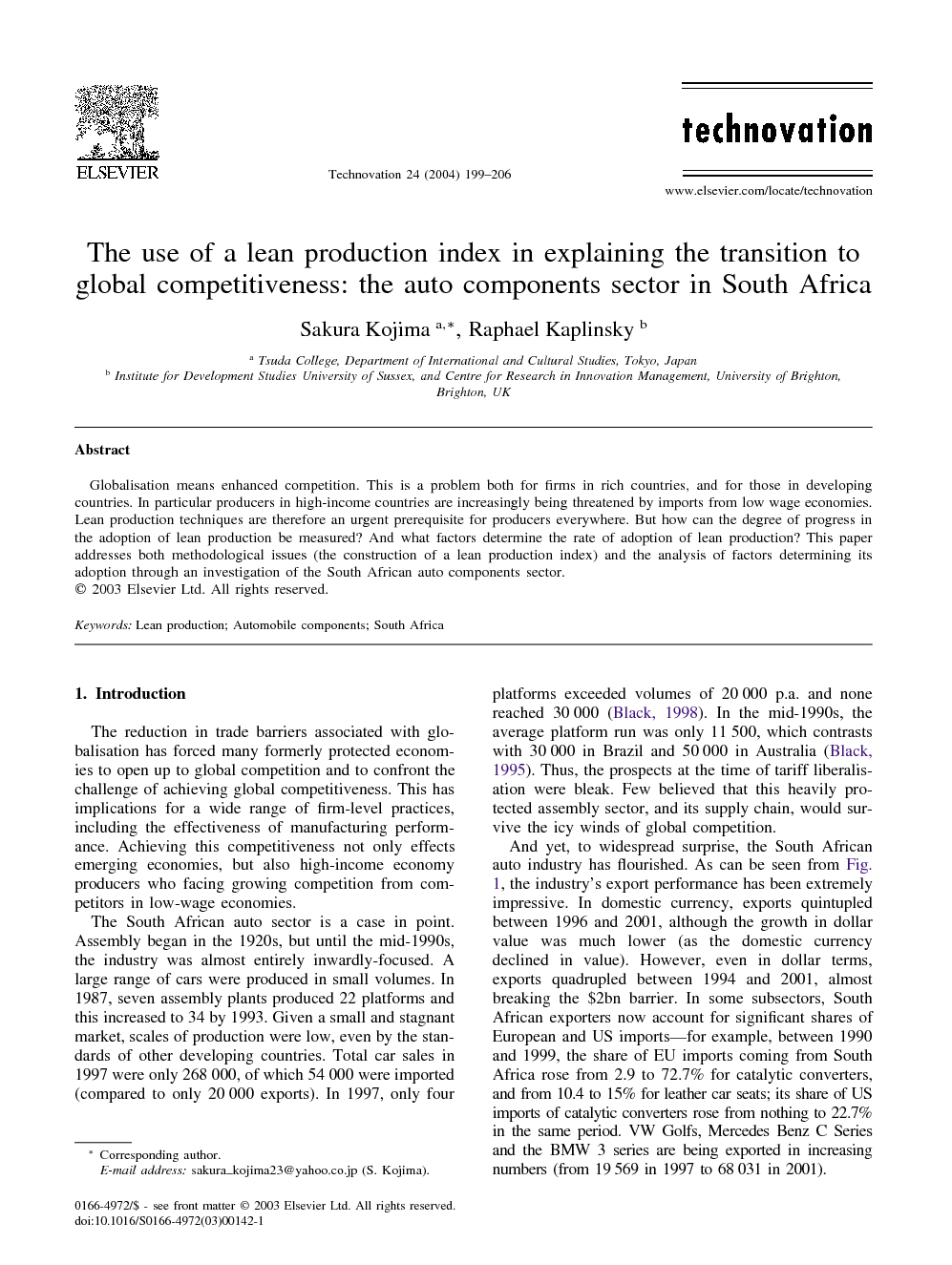 Globalisation means enhanced competition. This is a problem both for firms in rich countries, and for those in developing countries. In particular producers in high-income countries are increasingly being threatened by imports from low wage economies. Lean production techniques are therefore an urgent prerequisite for producers everywhere. But how can the degree of progress in the adoption of lean production be measured? And what factors determine the rate of adoption of lean production? This paper addresses both methodological issues (the construction of a lean production index) and the analysis of factors determining its adoption through an investigation of the South African auto components sector.

The reduction in trade barriers associated with globalisation has forced many formerly protected economies to open up to global competition and to confront the challenge of achieving global competitiveness. This has implications for a wide range of firm-level practices, including the effectiveness of manufacturing performance. Achieving this competitiveness not only effects emerging economies, but also high-income economy producers who facing growing competition from competitors in low-wage economies. The South African auto sector is a case in point. Assembly began in the 1920s, but until the mid-1990s, the industry was almost entirely inwardly-focused. A large range of cars were produced in small volumes. In 1987, seven assembly plants produced 22 platforms and this increased to 34 by 1993. Given a small and stagnant market, scales of production were low, even by the standards of other developing countries. Total car sales in 1997 were only 268 000, of which 54 000 were imported (compared to only 20 000 exports). In 1997, only four platforms exceeded volumes of 20 000 p.a. and none reached 30 000 (Black, 1998). In the mid-1990s, the average platform run was only 11 500, which contrasts with 30 000 in Brazil and 50 000 in Australia (Black, 1995). Thus, the prospects at the time of tariff liberalisation were bleak. Few believed that this heavily protected assembly sector, and its supply chain, would survive the icy winds of global competition. And yet, to widespread surprise, the South African auto industry has flourished. As can be seen from Fig. 1, the industry’s export performance has been extremely impressive. In domestic currency, exports quintupled between 1996 and 2001, although the growth in dollar value was much lower (as the domestic currency declined in value). However, even in dollar terms, exports quadrupled between 1994 and 2001, almost breaking the $2bn barrier. In some subsectors, South African exporters now account for significant shares of European and US imports—for example, between 1990 and 1999, the share of EU imports coming from South Africa rose from 2.9 to 72.7% for catalytic converters, and from 10.4 to 15% for leather car seats; its share of US imports of catalytic converters rose from nothing to 22.7% in the same period. VW Golfs, Mercedes Benz C Series and the BMW 3 series are being exported in increasing numbers (from 19 569 in 1997 to 68 031 in 2001).Figure options How did this transformation occur? And how would we know which firm-level practices delivered world class performance? These questions are not, of course, uniquely relevant to an analysis of the South African auto industry; they apply across the spectrum of countries and sectors. In the discussion which follows, we aim to provide a method for assessing the extent to which firms have achieved global best practices through introducing new manufacturing practices. Our intent here is to move beyond firm-level case-studies, and to develop a methodology which allows for a comprehensive quantitative assessment of performance and practice. The quantitative measure which is introduced—the Lean Production Index—combines both objectively measurable data-sets (for example, inventory-levels) and qualitative assessments made by key industry informants (Kojima, 2001). We are aware of the subjectivity which this involves, and of the difficulty of weighting different elements in a comprehensive index, and consequently have a sense of humility about the imperfect nature of this exercise. Yet we would argue that without trying to measure and aggregate a wide range of relevant factors, we have little scope for improving our capacity to generalise from firm-level observations. Therefore, to illustrate the potential power of this form of analysis, in Section 3 we use these Lean Production Index scores to test a number of hypotheses which help to explain the dramatic improvement in the competitive performance of the South African auto industry. The research is based on in-depth interviews and follow-up questionnaires with a stratified sample of 50 auto component firms who were members of the National Association of Automotive Component and Allied Manufacturers (NAACAM). (NAACAM producers accounted for more than 90% of industry output, and our sample, which was slightly biased in favour of large firms, comprises more than one-third of its membership). The survey was conducted in 1998, a period when the South African components sector was beginning the process of competitive restructuring.