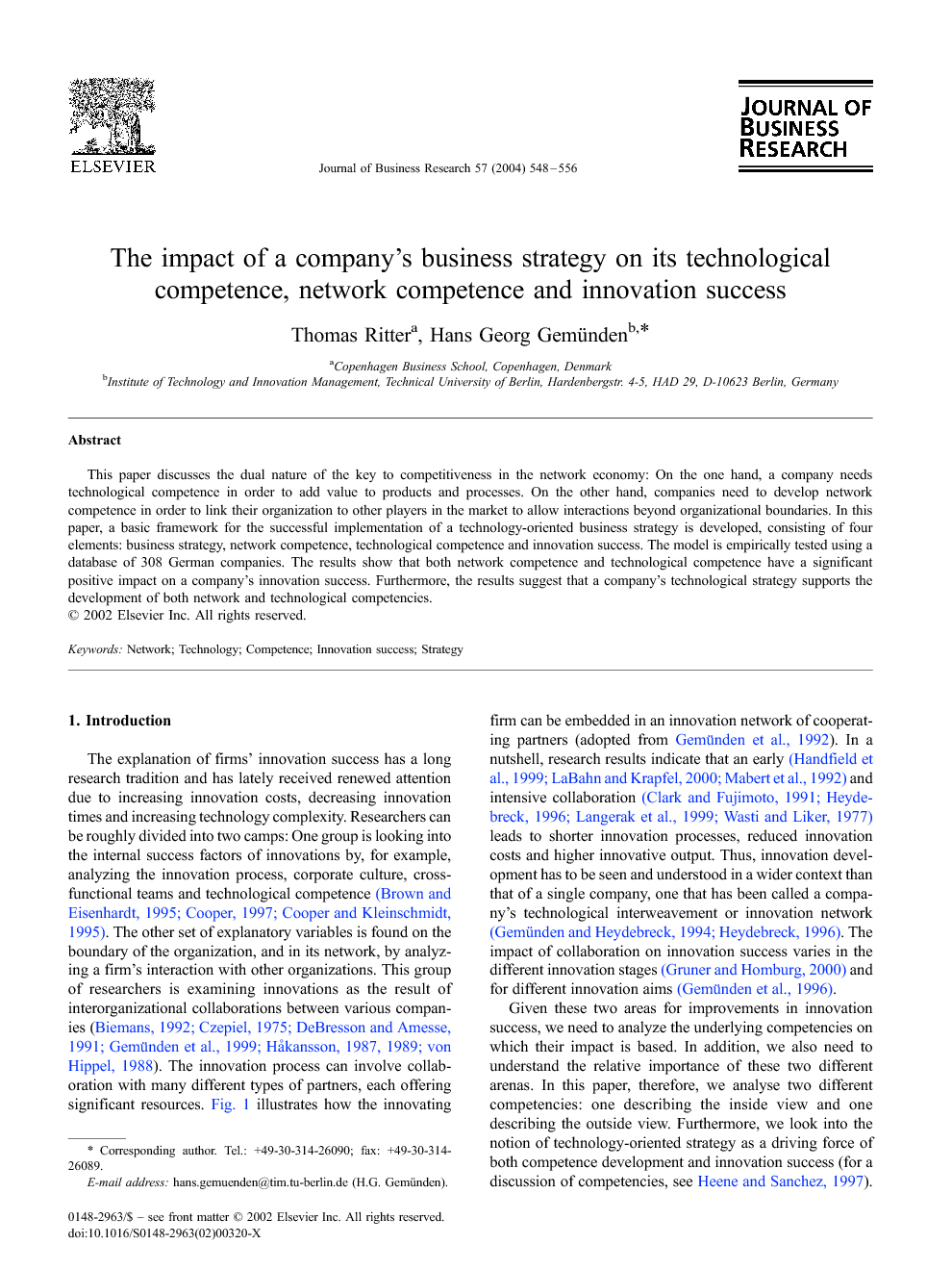 The explanation of firms' innovation success has a long research tradition and has lately received renewed attention due to increasing innovation costs, decreasing innovation times and increasing technology complexity. Researchers can be roughly divided into two camps: One group is looking into the internal success factors of innovations by, for example, analyzing the innovation process, corporate culture, crossfunctional teams and technological competence Brown and Eisenhardt, 1995, Cooper, 1997 and Cooper and Kleinschmidt, 1995. The other set of explanatory variables is found on the boundary of the organization, and in its network, by analyzing a firm's interaction with other organizations. This group of researchers is examining innovations as the result of interorganizational collaborations between various companies (Biemans, 1992, Czepiel, 1975, DeBresson and Amesse, 1991, Gemünden et al., 1999, Håkansson, 1987, Håkansson, 1989 and von Hippel, 1998). The innovation process can involve collaboration with many different types of partners, each offering significant resources. Fig. 1 illustrates how the innovating firm can be embedded in an innovation network of cooperating partners (adopted from Gemünden et al., 1992). In a nutshell, research results indicate that an early Handfield et al., 1999, LaBahn and Krapfel, 2000 and Mabert et al., 1992 and intensive collaboration Clark and Fujimoto, 1991, Heydebreck, 1996, Langerak et al., 1999 and Wasti and Liker, 1977 leads to shorter innovation processes, reduced innovation costs and higher innovative output. Thus, innovation development has to be seen and understood in a wider context than that of a single company, one that has been called a company's technological interweavement or innovation network Gemünden and Heydebreck, 1994 and Heydebreck, 1996. The impact of collaboration on innovation success varies in the different innovation stages (Gruner and Homburg, 2000) and for different innovation aims (Gemünden et al., 1996). Given these two areas for improvements in innovation success, we need to analyze the underlying competencies on which their impact is based. In addition, we also need to understand the relative importance of these two different arenas. In this paper, therefore, we analyse two different competencies: one describing the inside view and one describing the outside view. Furthermore, we look into the notion of technology-oriented strategy as a driving force of both competence development and innovation success (for a discussion of competencies, see Heene and Sanchez, 1997). The paper addresses two main research questions: Which competencies does a company need in order to achieve innovation success? What role does a company's business strategy play in competence development and innovation success? The paper is organized as follows: First, we develop a basic model describing the impact of technological and network competencies on a company's innovation success. We then incorporate business strategy in our model. Subsequently, the results of an empirical test of the model are discussed. Finally, we outline managerial implications and issues for further research.