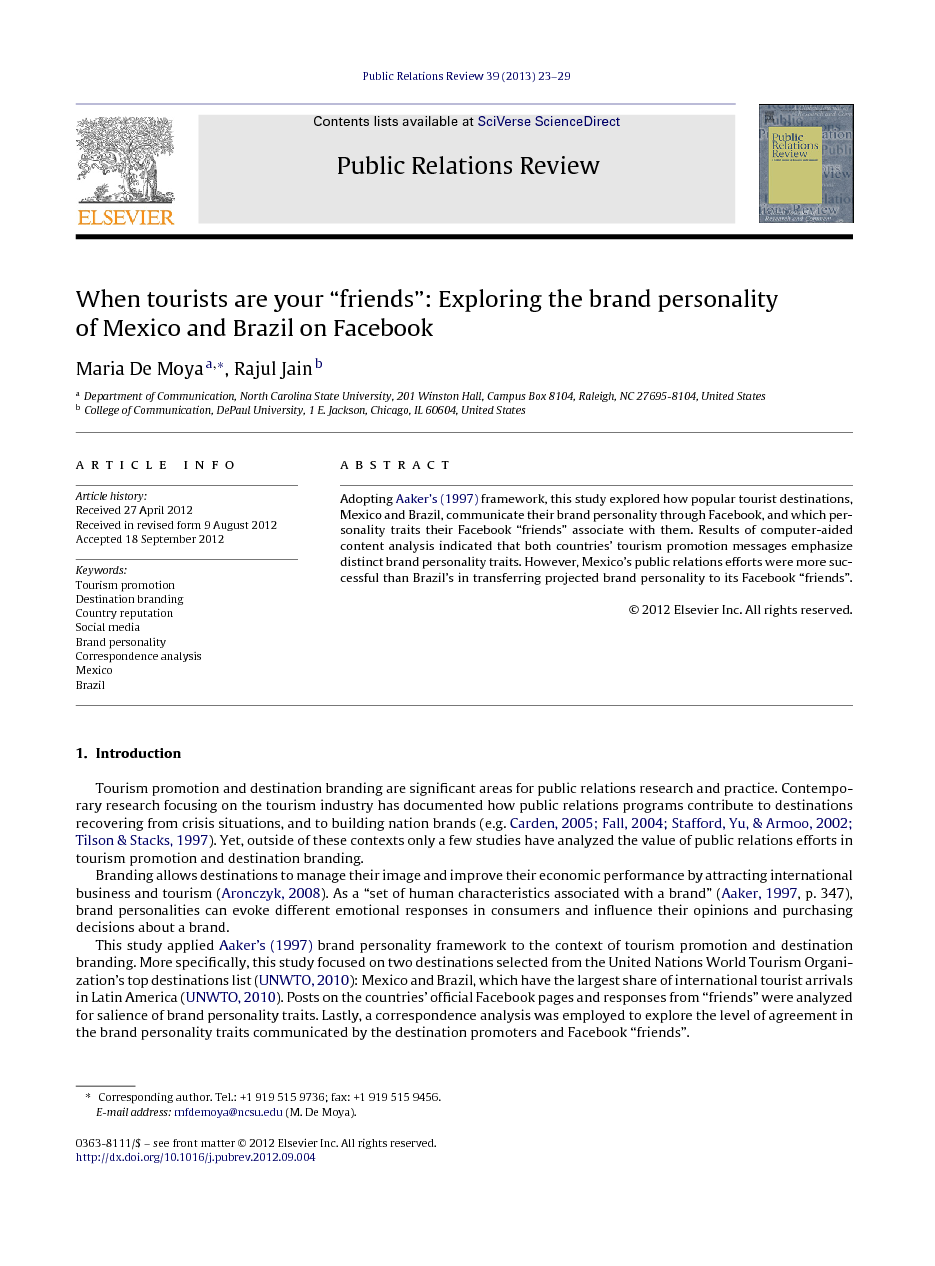 Tourism promotion and destination branding are significant areas for public relations research and practice. Contemporary research focusing on the tourism industry has documented how public relations programs contribute to destinations recovering from crisis situations, and to building nation brands (e.g. Carden, 2005, Fall, 2004, Stafford et al., 2002 and Tilson and Stacks, 1997). Yet, outside of these contexts only a few studies have analyzed the value of public relations efforts in tourism promotion and destination branding. Branding allows destinations to manage their image and improve their economic performance by attracting international business and tourism (Aronczyk, 2008). As a “set of human characteristics associated with a brand” (Aaker, 1997, p. 347), brand personalities can evoke different emotional responses in consumers and influence their opinions and purchasing decisions about a brand. This study applied Aaker's (1997) brand personality framework to the context of tourism promotion and destination branding. More specifically, this study focused on two destinations selected from the United Nations World Tourism Organization's top destinations list (UNWTO, 2010): Mexico and Brazil, which have the largest share of international tourist arrivals in Latin America (UNWTO, 2010). Posts on the countries’ official Facebook pages and responses from “friends” were analyzed for salience of brand personality traits. Lastly, a correspondence analysis was employed to explore the level of agreement in the brand personality traits communicated by the destination promoters and Facebook “friends”.

The findings indicated that Mexico and Brazil do indeed communicate distinctive brand personalities on each country's official Facebook page. As in previous research, findings showed that the most frequently observed brand personality trait was sincerity, followed by excitement ( Ekinci and Hosany, 2006 and Jain and Chan-Olmsted, 2009). By highlighting these traits on their Facebook messages, Mexico and Brazil aspire to enhance their attractiveness to prospective and returning tourists, communicating that they are cheerful, down-to-earth, imaginative and daring destinations (Aaker, 1997). However, findings showed that while “friends” of Mexico associated it with distinct brand personality traits, such mentions were absent in the messages posted by Brazil's “friends.” The brand personality trait, excitement, followed by sincerity, were the two most frequently associated traits with Mexico in both the promotional messages as well as the messages posted by its “friends.” However, even though sophistication, sincerity, and excitement were the most often used brand personality traits in Brazil's promotional messages, its “friends” did not communicate these traits in their messages. These findings were substantiated through the correspondence analysis, which also showed significant distance in the personality traits communicated between Brazil's promotional messages and the messages of its “friends.” An important finding of this study is that Facebook “friends” showed an interest in engaging the destination promoters in dialog about the destination; supporting existing research regarding the importance of social media in obtaining information about tourism destinations (Xiang & Gretzel, 2010). In fact, for both countries, “friends” posted responses to messages and started conversations. However, these findings also suggested that the number of interactions between destination promoters and members of its public via Facebook do not necessarily lead to agreement in the messages. This is evidenced in the lack of correspondence in Brazil's promotional and “friends” messages, while for Mexico, even though friend messages outnumbered the postings from tourism promoters a greater agreement in the personality traits was observed. This finding suggested that Mexico was more successful in communicating brand personality traits and leading the conversation. This study has several theoretical and practical implications for public relations in tourism branding and promotion. First, it demonstrated the use of Aaker's (1997) brand personality traits as a theoretical framework for studying public relations tourism promotion efforts. Additionally, from a country reputation perspective, this study highlighted the value that Facebook “friends” gave to the country's emotional appeal, i.e. how much people like, admire, and respect the country (Passow et al., 2005), as evidenced in the salience of the sincerity and excitement traits in their Facebook postings. This study not only contributed to the scholarly efforts in examining destination branding and public relations tourism promotion via social media sites, but also suggested new avenues of research in related areas of destination promotion and country reputation. For instance, future studies could analyze the bases for the personality traits being discussed through social media and other channels. Because country reputations are based at least in part on word of mouth and the information that the members of the audience get from other audience members (Yang et al., 2008), future research could identify how pre-existing reputation influences conversations of social media users about a country, and the personality traits that they assign to that country. Similarly, this type of analysis could also inform practice of public relations in the tourism industry, as it highlighted the use of correspondence analysis as an evaluation tool for messages from organizational senders and its recipients. In addition, this paper builds on the emerging interest in and importance of using social networking websites in public relations tourism branding and promotion efforts. Applying this analysis to “friends” messages for any given destination and/or competitors can provide key insights into how these publics view the nation's brand personalities, and how they may differentiate themselves from competing tourism destinations, which is a major concern in branding efforts (Aaker, 1997, Anholt, 1998, Anholt, 2006, Freling and Forbes, 2005 and Ramaseshan and Tsao, 2007). 5.1. Limitations and implications for future research This study has some limitations that need to be acknowledged, but which also provide insights into future research avenues. One limitation is that it analyzed only the textual information available on the official Facebook pages of Mexico and Brazil. Both pages also contained visual communication tools, which were not evaluated in this study due to the limitation of the software employed, which only analyzes textual data. Also, this study used only two nations in its analysis. Research in future could expand the study to more countries as well as other web-based mediums of communicating with publics.